After his death on 11th April 1985 Enver Hoxha was buried next to the Mother Albania statue in the Martyr’s Cemetery overlooking Tirana. However, the counter-revolution that took place in 1990 allowed his political enemies to take their revenge by denying him a place of honour in the country’s history and he was reburied in the main public cemetery of the city.

To get there take the bus to Kombinat, an orange and always crowded bus, from the top end of Rruga Kavajes, the road that leads away from Skënderbeu Square in a westerly direction. Cost of the fare is 40 leke.

Stay on the bus until it arrives at the terminus. This is the main square of Kombinat. During Socialism, in this square, standing atop a large plinth, was the statue of Joseph Stalin – which now stands in less grandeur behind the National Art Gallery in Tirana. Across the square from where the bus drops you is the entrance of the now abandoned and partially destroyed textile factory, which bore Stalin’s name and provided not only work for the vast majority of the population of Kombinat but also its name – kombinat means factory in Albanian.

Go back to the main road and follow the direction the bus had brought you, i.e., with Tirana at your back, and walk for about ten minutes to arrive at a narrow road that leads off the main road, slightly uphill, to the left. This junction is opposite a petrol station and there are flower shops as well as stone engravers workshops plainly visible. Continue along this road for a few minutes until it turns to the right and in less than 50 metres go through the gate on the left. There are always flower sellers on either side of this gate.

Once through the gates take the path to the left and then the first path, heading up hill, to the right. When you see a sign with ‘Parcela 6’ on your right you know you are getting close. Look for the back of the doubled-headed eagle symbol, ubiquitous throughout Albania, and that’s where Enver‘s remains currently reside. If you arrive at the same level as a second caged grave (presumably the relatives were afraid s/he would escape otherwise) you have gone too far.

It’s a modest grave, two in from the path, of red marble and the only inscription being his name and dates (1908-1985), surmounted by a small star. At the head there are two pillars which support a black metal, double-headed eagle. There are always flowers on the stone, a mixture of real and artificial.

Enver‘s remains were moved to the public cemetery in Kombinat in April 1992 from its location in the Martyrs’ Cemetery that looks down on the city of Tirana, in the north-west of the city, beside the road to Elbasin.

Even in its original setting the grave wasn’t ostentatious. It was a bigger piece of marble but the inscription was no different. What made it special was its location, the Martyr’s Cemetery being the place of honour for those who died in the fight against fascism during the Second World War. This was just a spiteful, political move by those opposed to Socialism as has been demonstrated by the installation of a pro-fascist monument to the right of the Mother Albania statue.

The original tomb stone was later used as the principle monument to the English military who died fighting in Albania during the Second World War. The English Cemetery is in Tirana Park just behind the main Tirana University Building.

Because the British had supplied the Communist Partisans with weapons after the victory over Nazism they thought they had the right to determine what should happen in Albania after liberation. British activities in the aftermath of the war continued until the fall of the Socialist system in 1990, beginning with the infamous ‘Corfu Incident’.

Or to read that account as a Word document Lilo Hoxha on his father’s, Enver Hoxha, exhumation.

The above picture was taken a few days after the celebration of Enver Hoxha’s birth, which falls on October 16th. 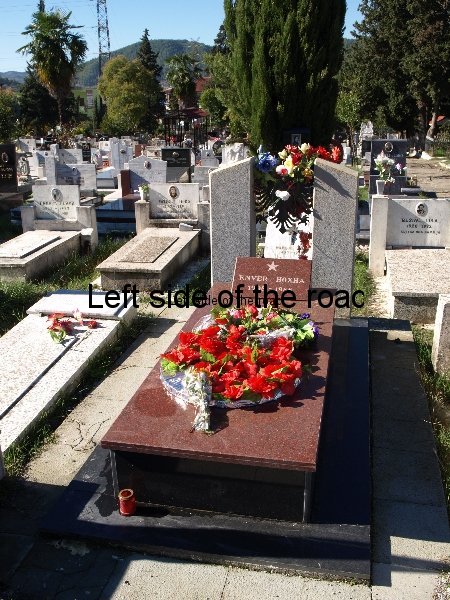 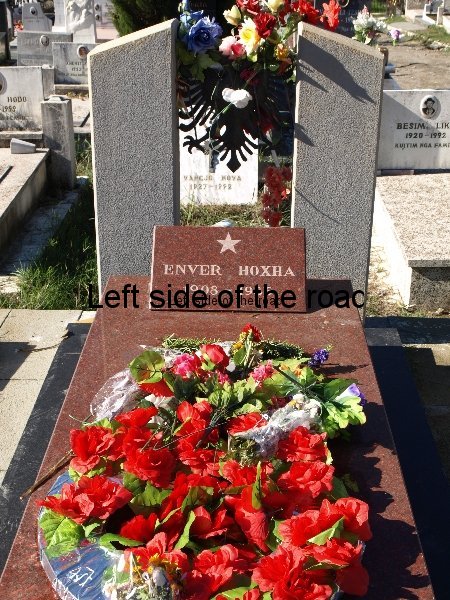 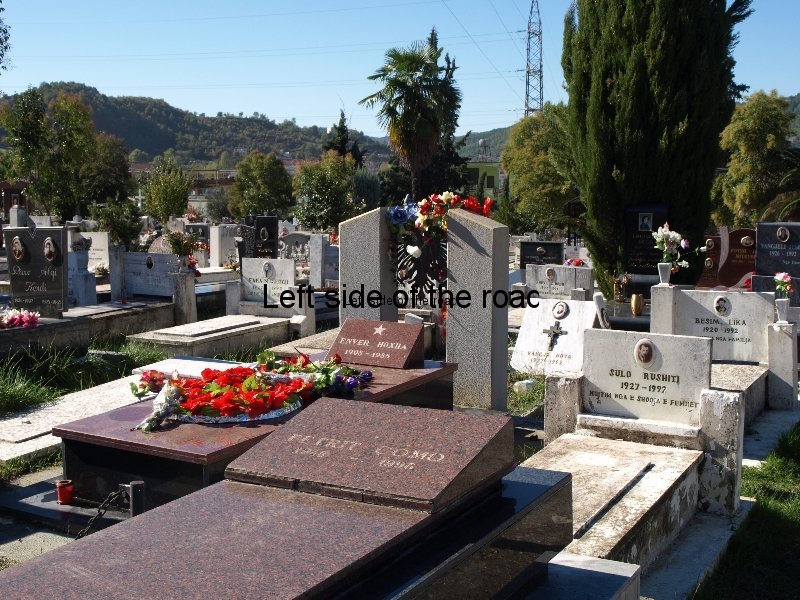 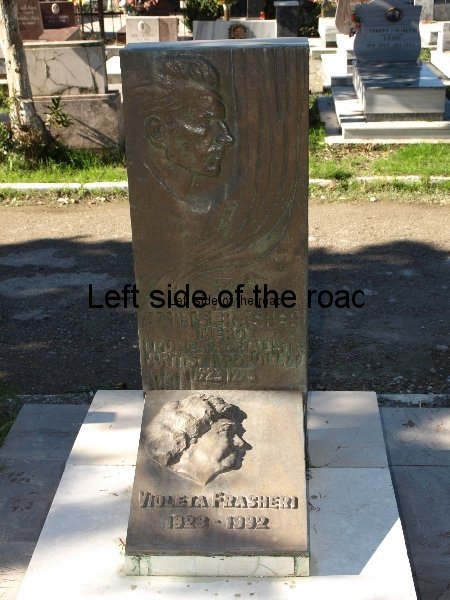 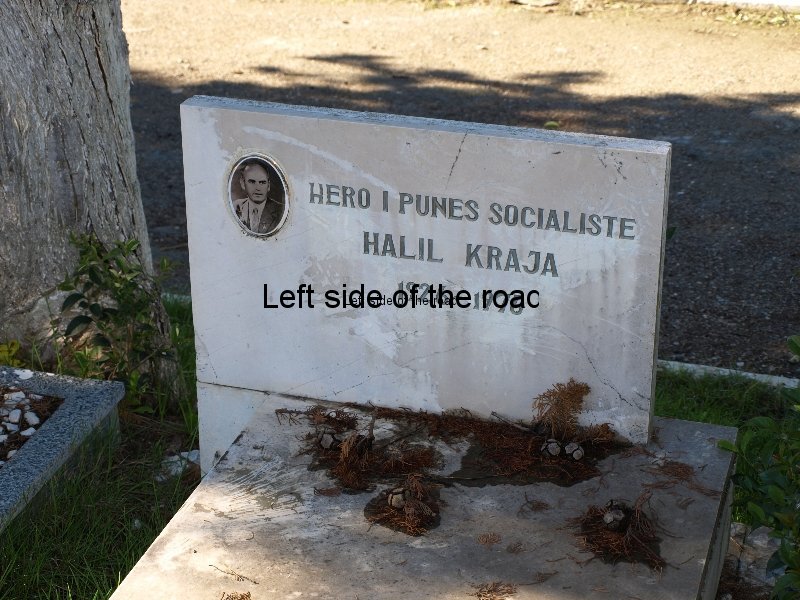 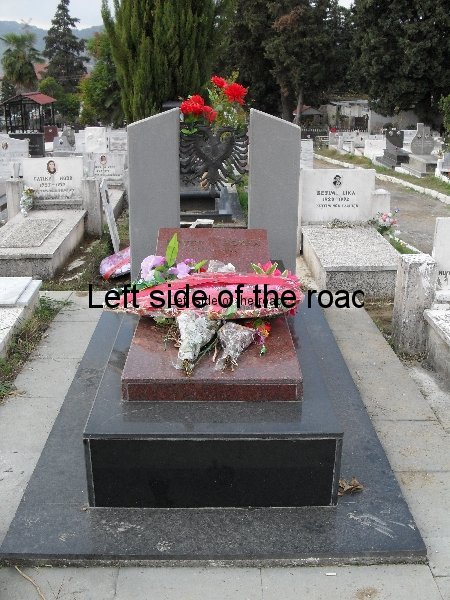 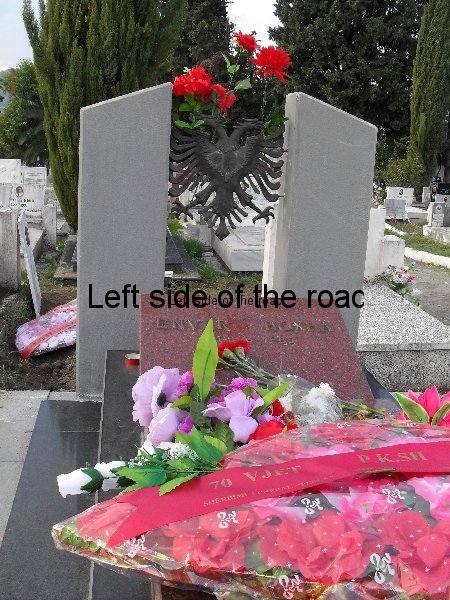