The English Cemetery in Tirana Park

On Sunday 11th November 2012 the British Embassy organised a Remembrance service at the English Cemetery in Tirana Park, behind the State University, in the centre of the city. There were few people in attendance, as the English community in Tirana is relatively small, but included the British Ambassador and the Prime Minister of Albania, Sali Berisha.

This is not an uncommon occurrence in countries which fought against Fascism in the 1930s and 40s but in Tirana such an event is loaded with a political significance that goes beyond commemorating the ultimate sacrifice of young men.

Albania was never a significant theatre of war for the British armed forces, although for the intelligence community the country was important from the very beginning of the war and they were always looking for a way to influence the eventual outcome of the conflict. This primarily, until the German Nazis were on the point of being thrown out of the country, meant war supplies being air dropped into the country under the auspices of the SOE (the Special Operations Executive). After the war it was officially dissolved but its operational expertise was absorbed by MI6 in its anti-Communist activity during the Cold War.

A total of 53 British troops lost their lives in Albania and the headstones in this tiny part of Tirana park commemorate 46 of them. (To put matters into perspective an estimated 30,000 Albanians died during the struggle against Fascism, out of a population at that time of little over a million.)

However, this war grave has only existed since 1995. As the Commonwealth War Graves Commission states the ‘political situation’ at the end of hostilities (and continuing until the early 1990s) prevented any representations for such a memorial being received favourably by the Albanian government.

Berisha’s presence at this service was not merely, or even nominally, prompted by respect for those who fell in the fight against Fascism. The country only recently (in 2009) joined NATO and when I was travelling around the country earlier this year I came across more British soldiers than I normally do walking around most towns in the UK. Also Albania has applied for membership of the EU (a vain hope, I would surmise) so it pays to keep in well with his masters. I sometimes think that Berisha is so far up the fundament of the west that you can barely see his shoes. His promotion of the return of the remains of the dictator and collaborator, who made the country no more than a vassal state to Italian Fascism in the 1920s and 30s, Ahmet Muhtar Bej Zogolli (King Zog I) certainly doesn’t mark Berisha down as a staunch anti-Fascist. The ‘celebration’ of this return to the homeland was to take place less than a week later.

But there is one aspect of the this British War Grave that is different, I would suggest, from any other similar place in the world. I alluded to this situation in my earlier post on the present location of Enver Hoxha’s remains.

And this revolves around the red marble memorial stone which is the centrepiece of the cemetery.

Enver Hoxha’s tomb was originally to the left of the huge Mother Albania statue in the Martyrs Cemetery which overlooks Tirana, a short distance from the city centre on the road to Elbasin. His remains were exhumed in 1992 and he was reburied in the city’s main cemetery on the western outskirts of the capital.

Now I’ve read in a couple of places of the ‘grandiose’ nature of his tomb. Now one person’s grandiose is another’s modest. Have a look at this image taken before 1992.

Now have a look at this picture of the British memorial stone.

What about this close up?

What are those holes in the memorial stone?

Notice the little holes above the grey slate with the Albanian writing? (If you are wondering the Albanian translates into: ‘In memory of those in the English military who fell in Albania during the Second World War.’)

This is Enver Hoxha’s original tomb stone, the holes being where his name would have been originally! Now I’m all for recycling but this is the first time I’m aware of such conscientious re-use of a slab of marble. This is even more so the case in a country where the Albanian for recycling is ‘throw any rubbish wherever you like, preferably a water course’.

Why was this piece of stone used in this way? Did, or even does, the Commonwealth War Graves Commission know about this? They don’t say anything on their website. Was it something like the Catholic Church’s use of Christian religious symbols in their destruction of indigenous religions in countries like Peru, the so-called ‘extirpation of idolatry’? Was it to demonstrate to the British Government that after all their attempts to destroy the Socialist society from 1946 onwards that they had finally succeeded? Was it because the country was so strapped for cash that they had to look for a second-hand memorial stone? Is it meant to be a sign of respect towards the British dead? Or not?

This just seems to me to be a little bit bizarre. 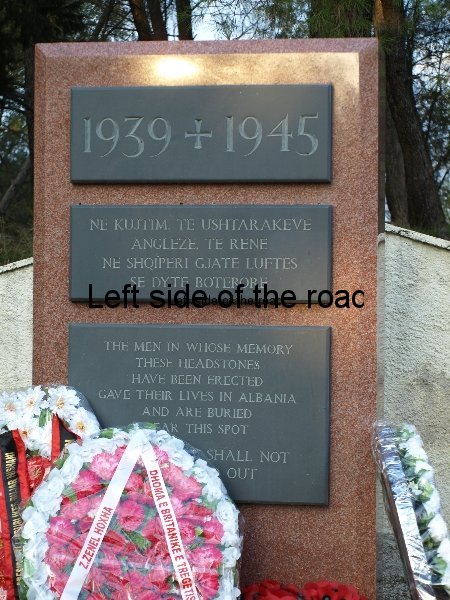 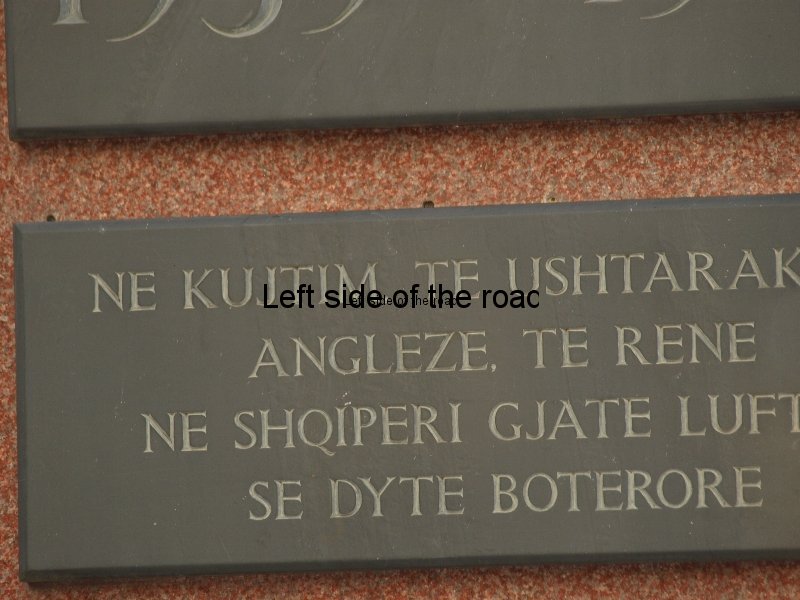 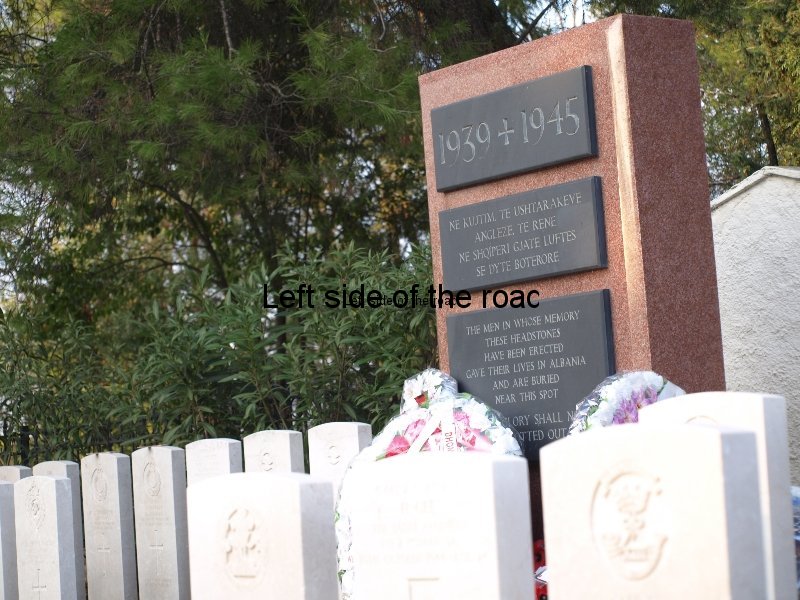 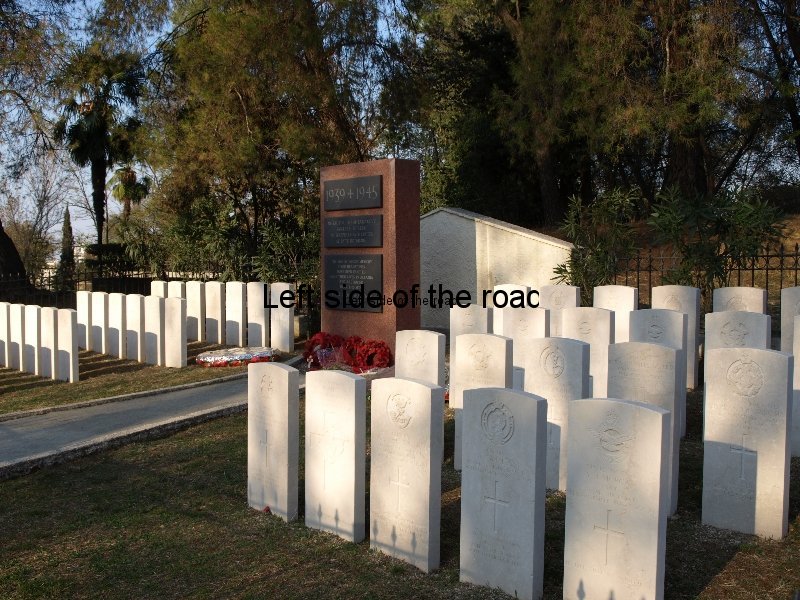 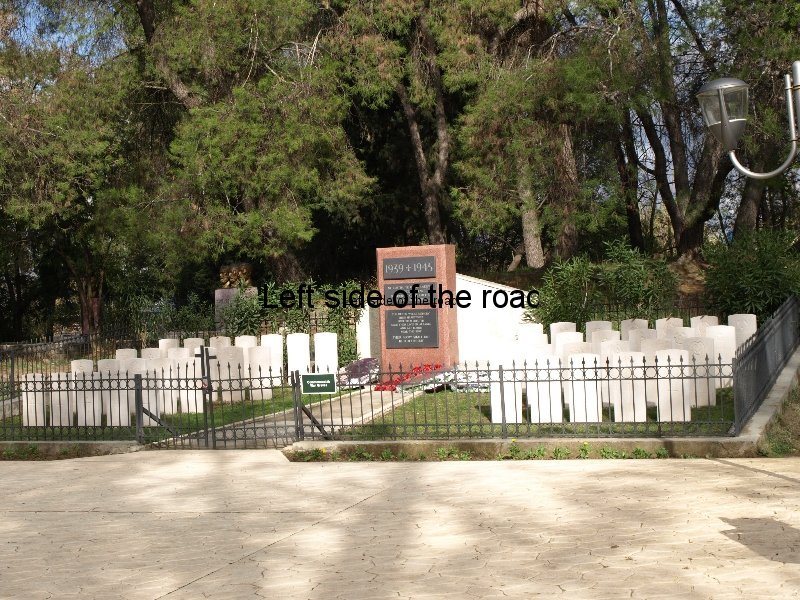 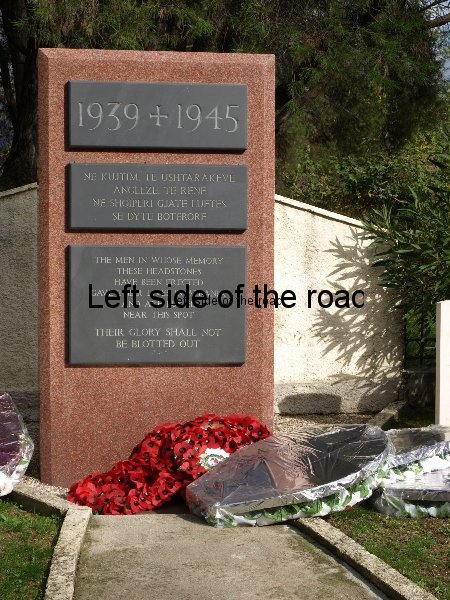 4 thoughts on “The English Cemetery in Tirana Park”