Nexhmije and Enver together in Kombinat

Every time I’m in Tirana I try and make a visit to the cemetery on the western outskirts of the city where the remains of Enver Hoxha are buried. The area is known as Kombinat – Factory, after the huge Stalin textile factory that used to be exist in the zone. The main entrance used to be through the arch (which is really all that still exists of the factory) on the western side of the big square in front of the Bashkia. In the middle of this square there used to be a statue of Comrade Stalin, standing on a tall plinth. That particular statue was removed and placed behind the National Art Gallery in Tirana. (The Gallery is inaccessible at the moment, whilst the building undergoes refurbishment, so what will happen to those statues when the building reopens is not known.)

When Shoku Enver died in 1984 he was initially interred next to the statue of Mother Albania in the National Martyrs’ Cemetery in the hills above Tirana. As the reaction gained more force he was removed and placed in the city’s municipal cemetery. His place beside the symbol of a free and independent nation being taken by a mixture of fascists, renegades, collaborators and ‘country-sellers’.

The grave is not too difficult to find and directions of how to get to Kombinat, the cemetery and then the grave were posted some years ago.

Normally there are a few flowers, either real or artificial, and sometimes a more complex wreath depending upon the time of the year, an anniversary of his birth and death, for example, and on my visit in the early part of December 2021 there was a wreath which had been laid there on the 29th November, the date of final defeat of the Nazis in 1944. That date signalled the real independence of Albania and the beginning of the construction of Socialism.

The Albanian version of the experiment ended in 1990 when the counter-revolution gained the upper hand and Enver’s statue, that stood in Skenderberg Square in Tirana, was pulled down.

The large, red, marble statue that bore his name and dates was later used as the main memorial to the handful of British soldiers who died in Albania during the Second World War. This cemetery is in Tirana Park, conveniently close to the memorial garden to the dead of the German invaders.

The independence that so many had fought for (and for which many brave men and women) gave their lives – celebrated by revolutionaries on 29th November – is now a thing of the past. The present leaders, of whatever political colour, make Oliver look like a revolutionary, begging at the feet of the capitalist powers for whatever stale crumbs they no longer need from their table. This was clearly shown in late December 2021 when the US ambassador to Albania, together with a representative from the European Union gave their verdict on the country’s efforts to combat ‘corruption and maladministration’ in order to be invited into the capitalist club – but only as minor, insignificant and ‘non-speaking’ members.

However, there has been one significant change at the cemetery since my last visit. Nexhmije, Enver’s wife and comrade in arms, one of the first members of the Albanian Communist Party (later to be re-named as the Party of Labour of Albania), and Partisan fighter during the National Anti-Fascist Liberation War, died on the 26th February 2020 and she now lies next to Enver. The cemetery was full when Enver was moved there so someone must have been moved to allow for Nexhmije to lie alongside the great Albanian leader.

So if you visit in the future you will need to take two flowers. 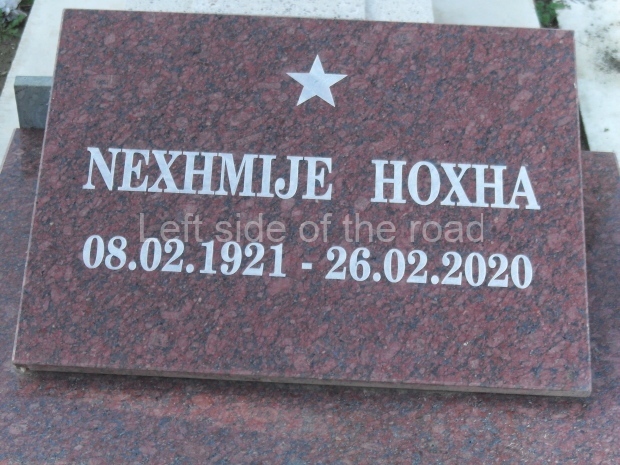 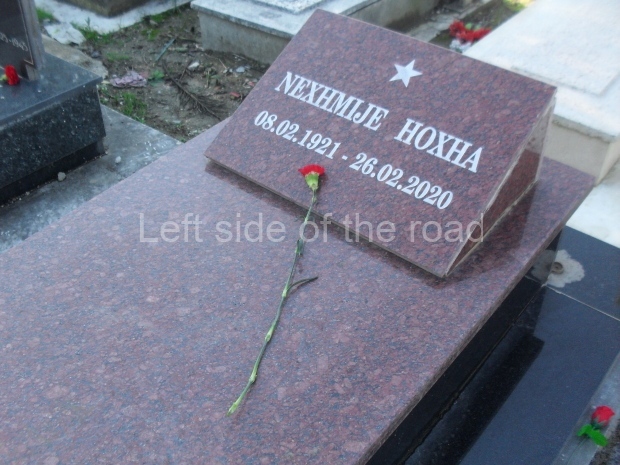 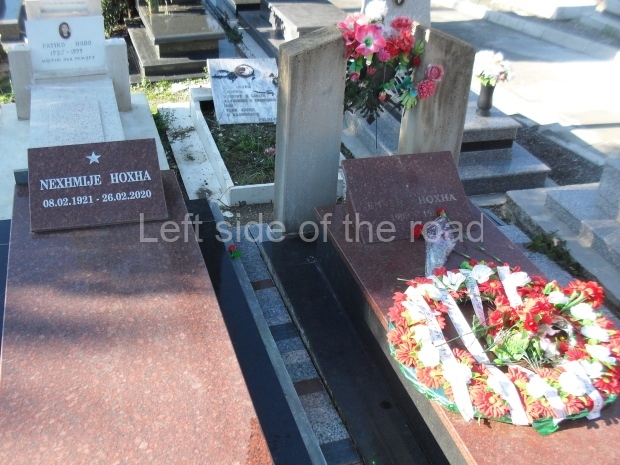 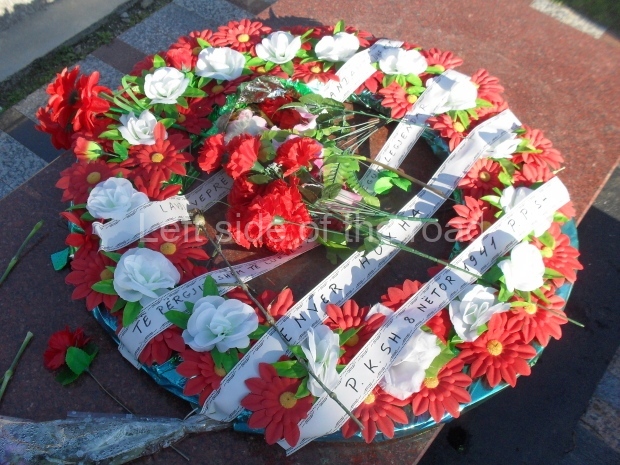 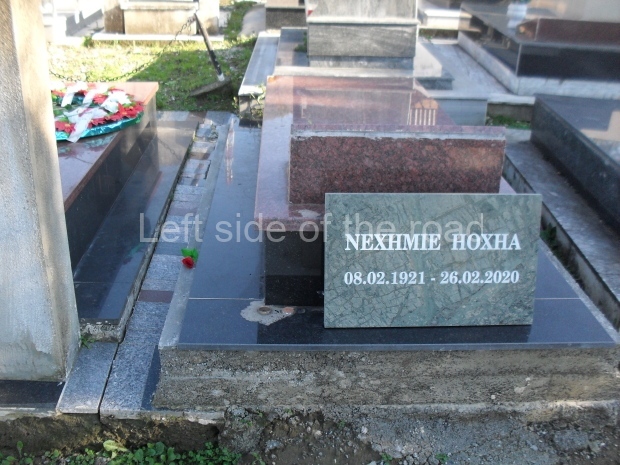 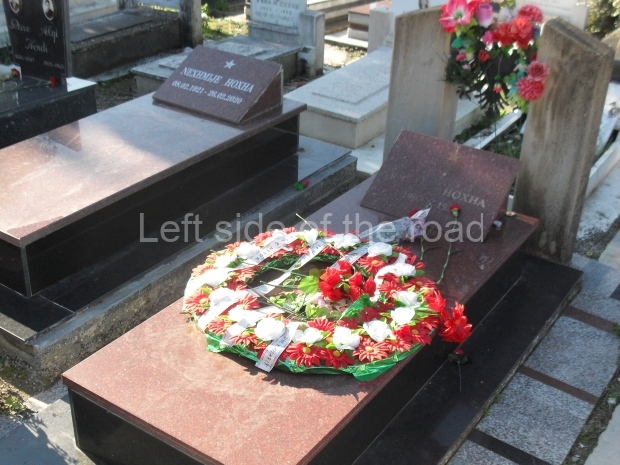 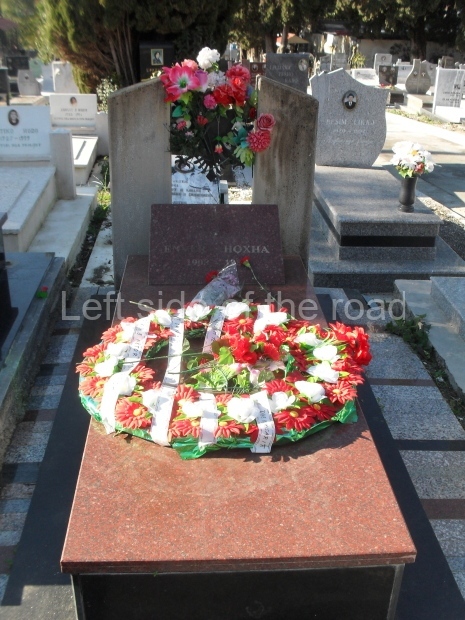 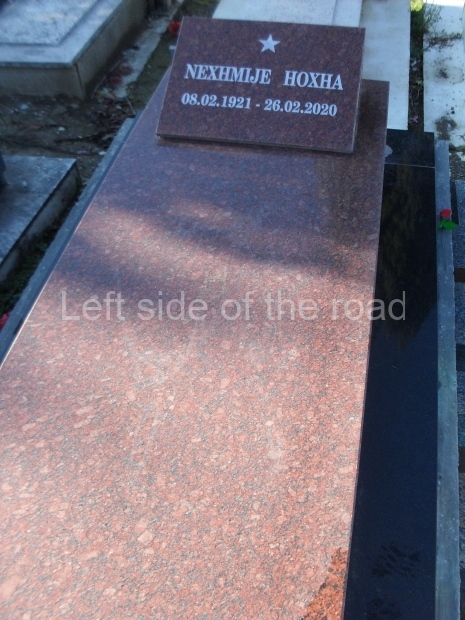