A number of Martyrs’ Cemeteries have a single female partisan as the principal statue, Fier and Lushnje are two that immediately come to mind. This was also chosen as the case in Sarandë’s Martyrs’ Cemetery.

This has recently been repainted so there is, as on other occasions, some doubt of the original intention of the artists (here there are two attributed). In some ways it does turn the statue into a bit of a comic caricature but at least it shows an attitude of care for the monument, however badly executed. Whatever the pros and cons of such ‘restoration’ I prefer this to the total neglect that other lapidars throughout Albania have undergone.

The single female is standing in victorious celebration. Her arms are held high over her head as she waves the banner of victory. In her right hand she grips hold of her rifle by the firing mechanism. From this part of her weapon, until just before the end of the barrel, the sleeve for the pole of the national flag has been pulled over the barrel and she keeps it in place by her hand. A few inches of the top of the barrel can be seen just above the top left hand edge of the banner.

Here is where there is some problem with (re)painting of the lapidars. It might be more acceptable if the work was done by professional artists or restorers rather than enthusiastic amateurs. Here the stock of the rifle has been painted brown – but so has the metal firing mechanism, the trigger guard and the trigger itself, and, unfortunately not with the greatest of care. It’s difficult to see if the protruding end of the barrel has been painted brown, or even red, but it’s certainly not the colour that a real rifle would have been. Here, I suppose, is a call that if the monuments are to be painted there is a commitment to accuracy.

The banner is the flag of the Communist led National Liberation Front and which became the national flag of Albania after Liberation (and the beginning of true independence for the country) on the 29th November, 1944.

This is a red flag with a black, double-headed eagle in the centre. Over the two heads there was a gold star. The eagle on a red background had been the symbol of independence in Albania since the time of Skenderbeu in the 15th century. With the success of the Socialist revolution the star was added, this being the emblem of the Communists in the war against fascism.

This flag is shown as if it is being blown in the wind and the partisan is holding the bottom left hand corner of the flag with her left hand. Where the flag billows in the wind is where the statue is first attached to the column in front of which it stands.

As is not unusual in those lapidars which have been ‘restored’ there has been a little bit of political censorship, a re-writing of history. If you look carefully you will see the outline of a star over the heads of the eagles but in the ‘restoration’ this has been filled in and in the repainting has just been coloured red and not picked out in gold as it should be if there was a respect for history. Not the first nor the last time we encounter such conscious political vandalism in present-day, ‘democratic’ Albania.

Now to the Partisan herself. She is standing in full partisan uniform. On her head she wears a cap which has been another victim of vandalism. When originally unveiled there would certainly have been the outline (of just plain plaster and almost certainly not painted) of a star at the front of the cap. There is very little sign of that here so I assume to avoid the possible thorny question of why re-write history it was just plastered over. To have been true to the original that star should have been picked out in red when the restoration/cleaning work was done.

Her very long hair (totally impractical for a Partisan) is braided on either side of her head and the braids join together to form one even longer braid just behind her neck. She wears of tight vest over which she has a jacket with strangely wide, loose sleeves which, if real, would roll down her arms to her shoulders. The bottom of her jacket billows out behind her, mirroring that of the flag, and is the second point of contact between the statue and the column behind.

Around her waist she has five ammunition pouches, each containing five bullets. Her trousers are tucked in at the bottom to long socks that come to just below her knees and on her feet she wears a simple pair of sandals. (There’s a study in itself of the footwear depicted on Albanian Socialist lapidars.)

She stands on a block which has been painted brown on the top and black on the sides. Why not an irregular surface to represent the hills and mountains of Albania, where most of the fighting took place, is due, I believe, to the date that this lapidar was created.

On the left hand side of the column can be found the letters LL LZH and AL HH together with the number 88 or 89 (I think 89). This I assume to be the letters of the names of the sculptor/architect of the monument but, so far, have been unable to identify them. That being the case this must have been one of the very last, if not the last, lapidars to have been created in the Socialist era. There had been in existence a much more basic lapidar for many years but towards the end of the 1980s, with other towns improving their monuments (such as Lushnje) Sarandë, presumably, thought to do the same.

However, the later lapidars started to take a different approach to how the issues of the past were represented. In a sense they became less confrontational, more appeasing as the strength of Albania’s Cultural Revolution waned, especially after the death of Enver Hoxha in April 1985. This meant, among other things, the symbolism that had been established in the 1970s (such as irregular surfaces to reference the mountains) began to be ignored and, more importantly, as a political consideration when it came to the role of an artist in a Socialist society, the names (initials) of the artists started to appear on their work.

The column behind the Partisan flares out slightly at the base then narrows when behind her to gradually widen as it gets to its summit, about the same distance above the flag as it is below it. Towards the top of the column there’s an arrangement of six red stars, of slightly different sizes, which could represent the constellation of Ursa Major, The Plough (although one star short). On the very summit there’s a large red star, a typical crowning glory on lapidars (although also the target for vandalism in many cases) and there as a symbol of Communism.

To the right of the main lapidar is a white, concrete, fluted column which widens out half way up to provide the support for a large concrete bowl. It’s also worth noting the presence of the palm trees, often in Albanian cemeteries and for the same reasons as they were placed in Librazhd Martyrs’ Cemetery.

There is a flight of steps on either side of the statue and the tombs are on 3 or 4 different levels, on rows beneath. The space for the tombs fans out on both sides of the statue causing it to be much wider by the entrance lower down the hill than it is a the top. On one level there are nine marble slabs upon which are inscribed the names of almost 150 Partisans who would have died in the area (or who were originally from the area and died elsewhere in the country) who don’t have an individual tomb. The cemetery is reasonably well-kept and the tombs tended to on a semi-regular basis.

The location at its inception would have been marvellous, outside and above the old town of Sarandë, looking down onto the Ionian Sea, with the island of Corfu in the distance (and the site of the notorious ‘Corfu Incident’) with citrus and olive groves all around.

Now the cemetery has been overtaken by the unplanned expansion of the town’s tourist infrastructure with apartment blocks or hotels (many incomplete) appearing on every conceivable plot of land, completely changing the atmosphere of the town – and not for the better.

At the very bottom, by the original entrance gates, is a one storey building which would have housed the local Liberation War museum – now abandoned and empty.

As with many of the Albanian lapidars what we see today has not always been the case. By 1971 there existed a tall, two-part monolith with a large panel at 90º to the column at the bottom. Although it’s not clear it looks as if on this panel the names of some of the Saranda Partisans were listed. This stood at the top of a long flight of steps. I assume it was in the same location but it would seem to indicate if that was indeed the case there was some major remodelling of the cemetery when the statue was added in 1988/9.

It’s a little bit difficult to find as the area is now full of new hotels and apartment blocks. As you go up the steep road that takes you in the direction of Gjirokaster the cemetery is on the right, just after the junction with Rruga Skenderbeu (on the left). Once you know what you are looking for it stands out quite clearly amongst the tower blocks when you look over from the ferry port. 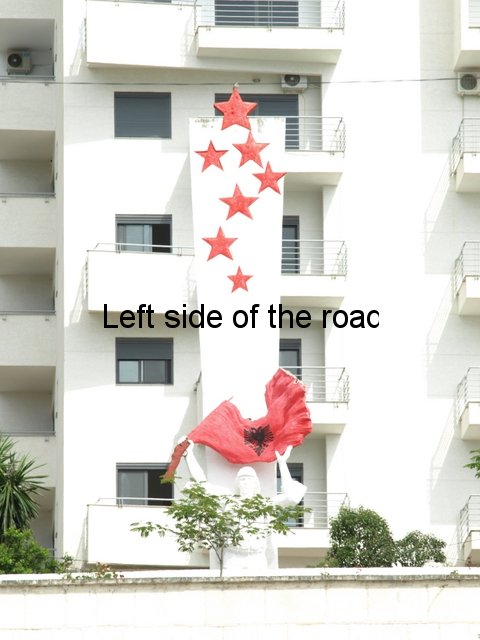 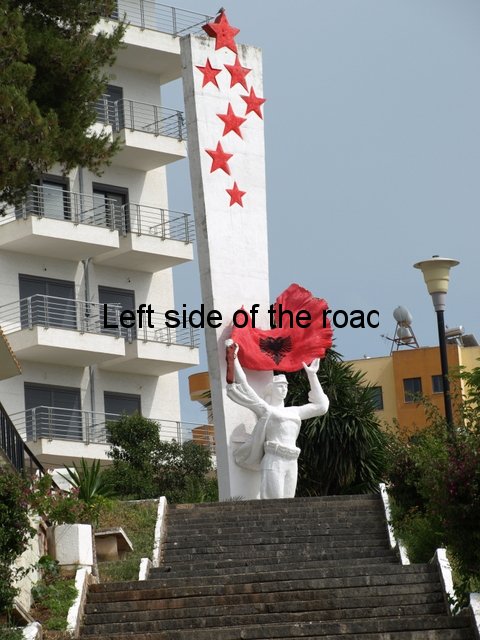 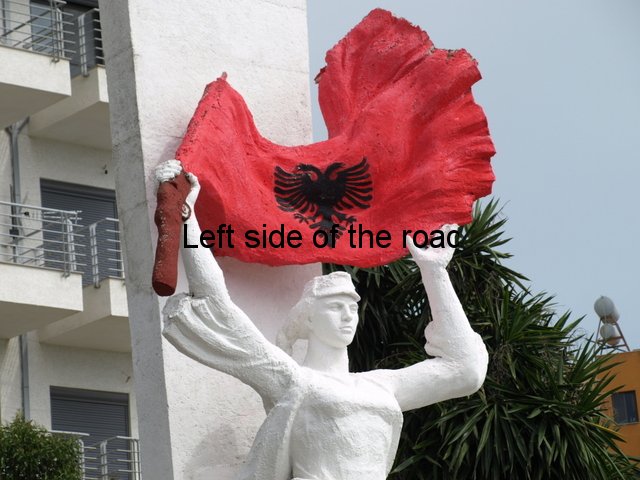 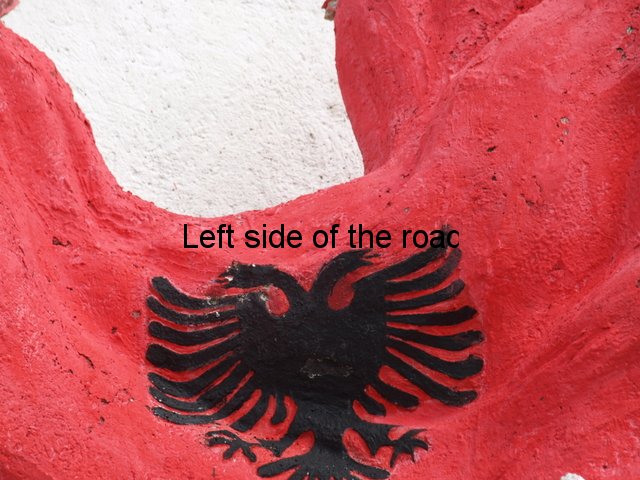 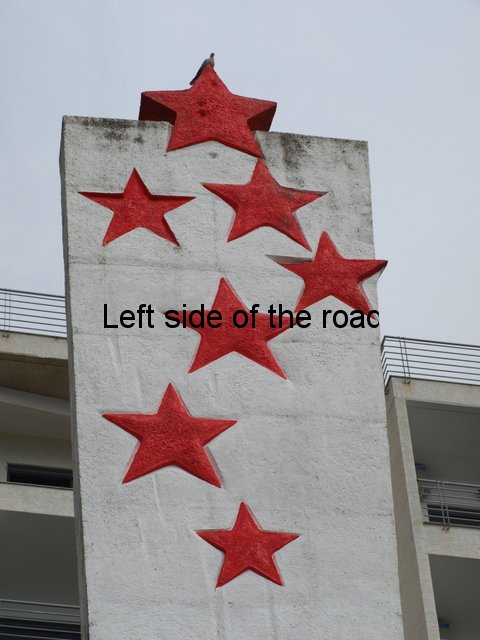 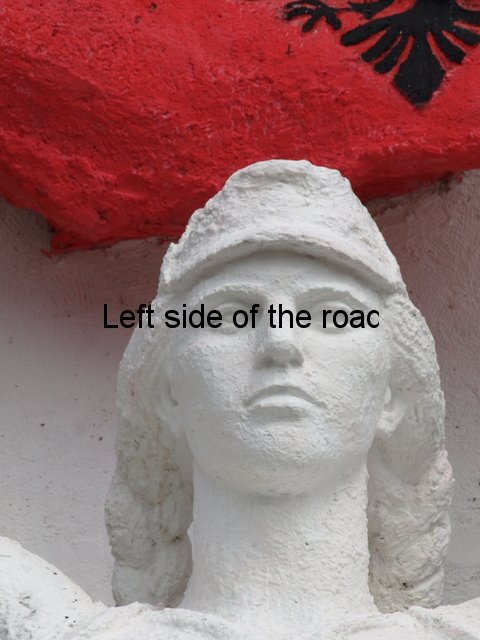 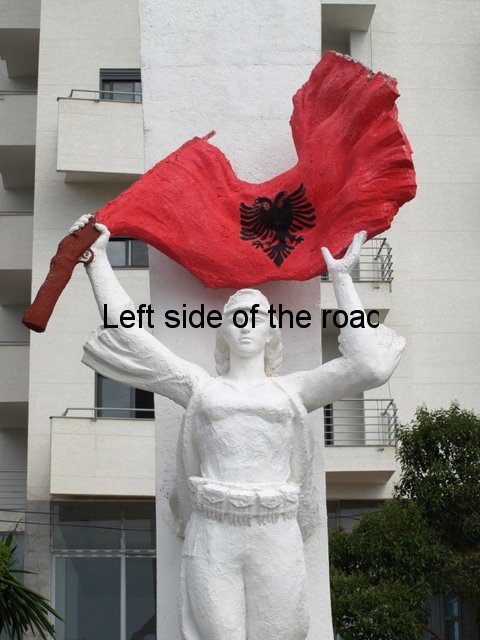 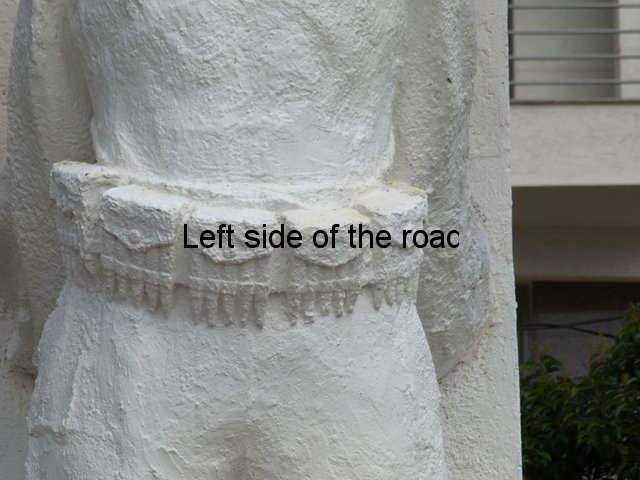 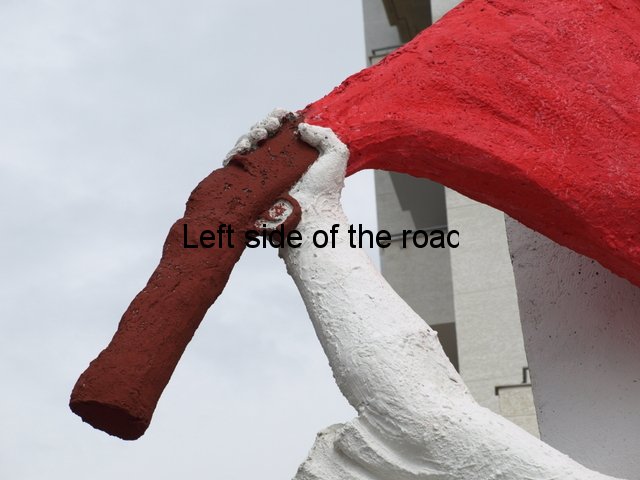 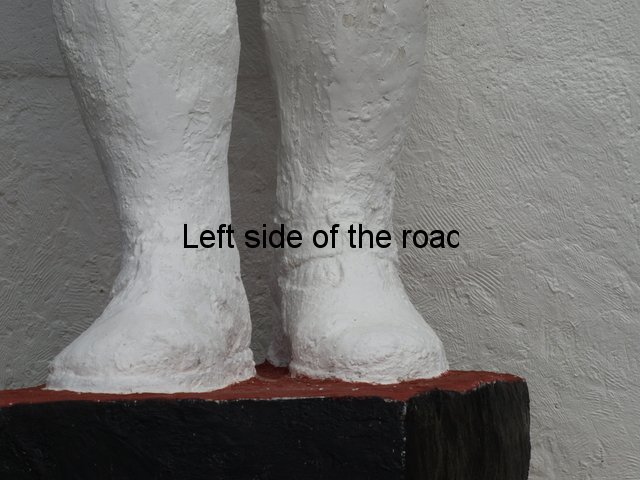 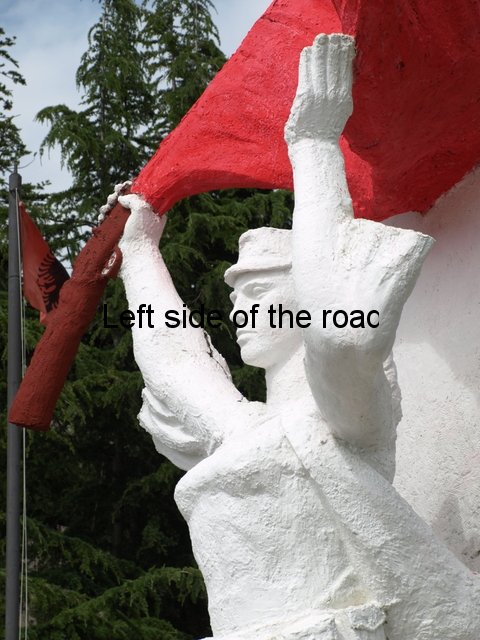 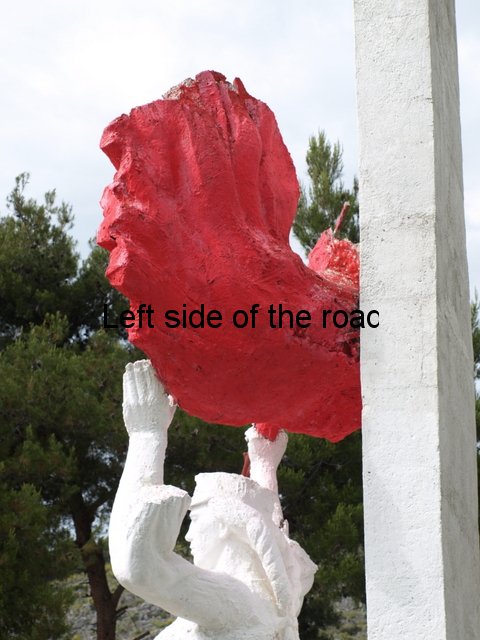 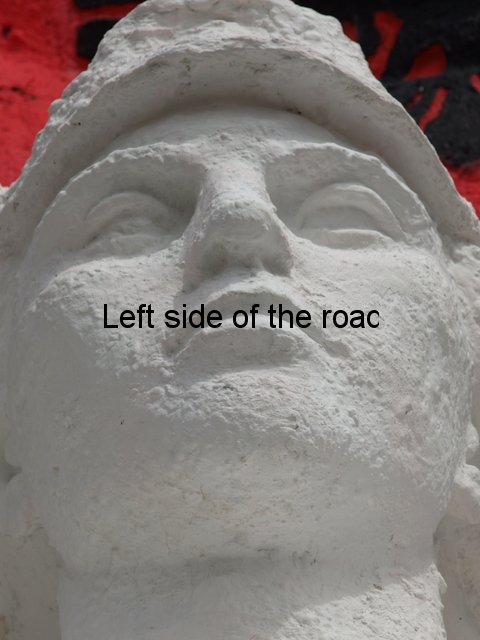 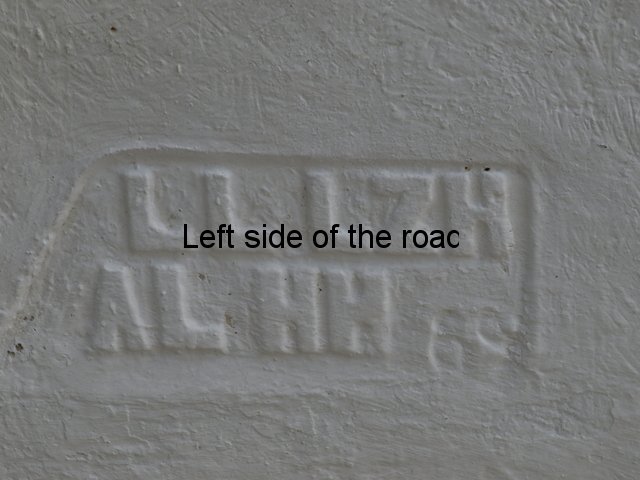 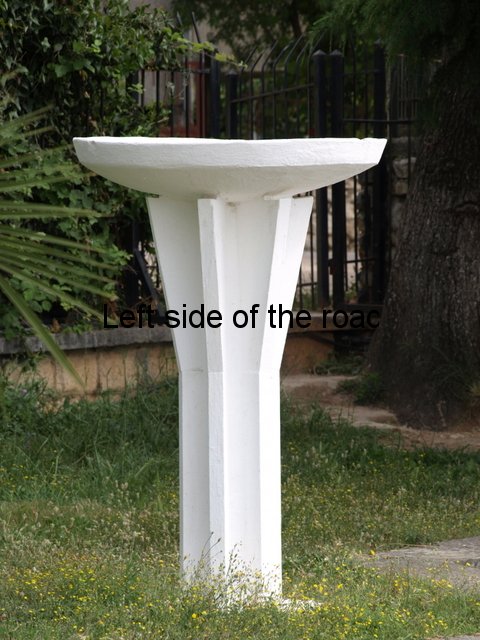 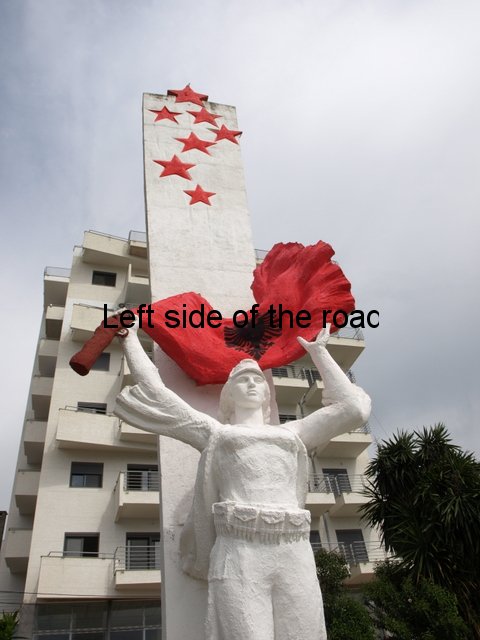 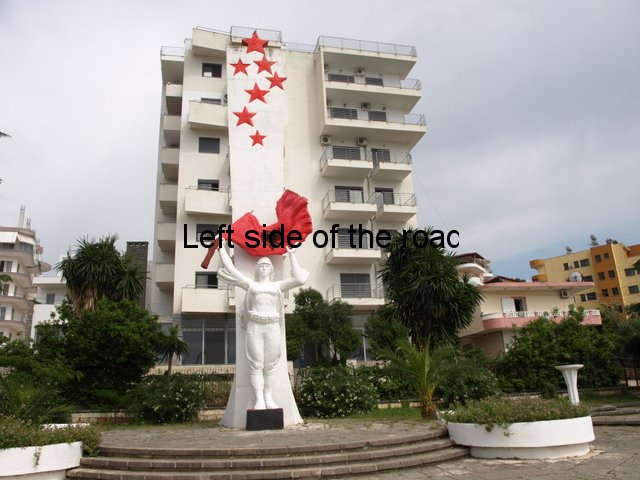 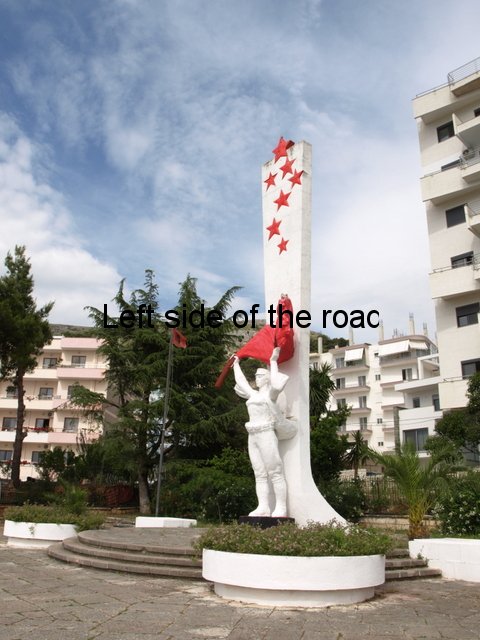 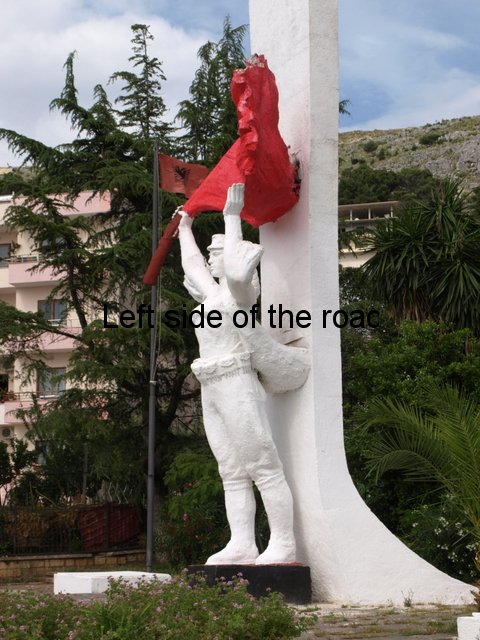 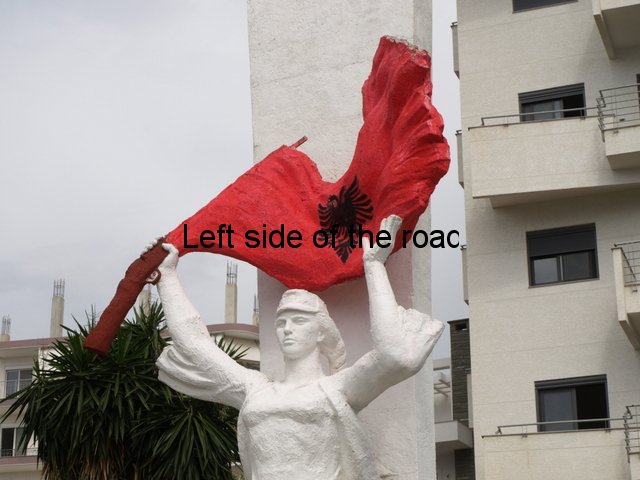 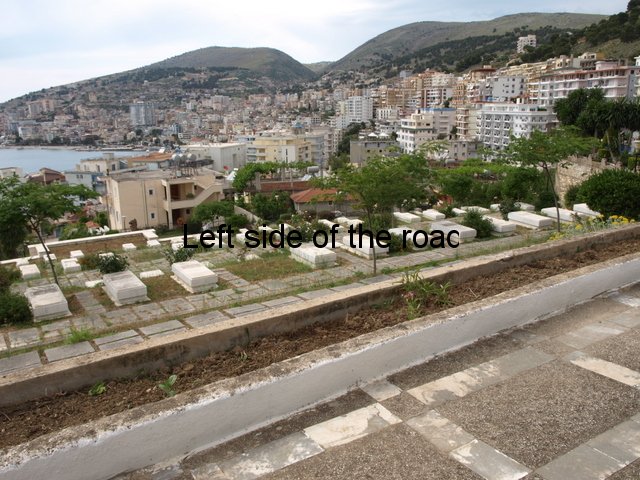 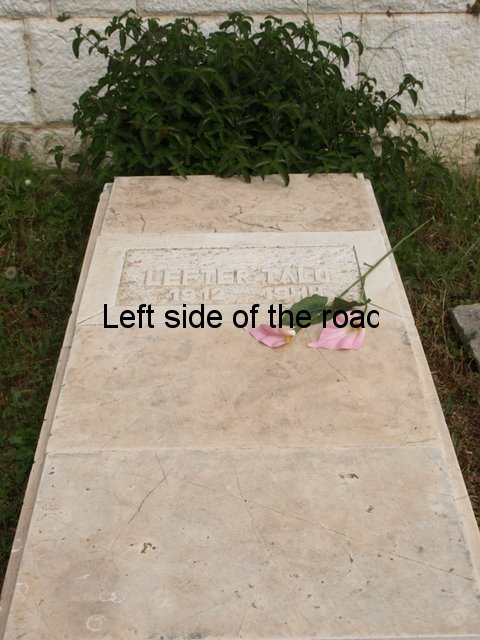 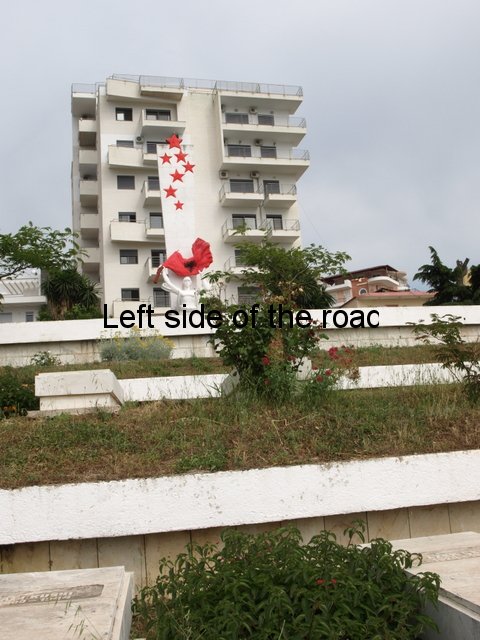 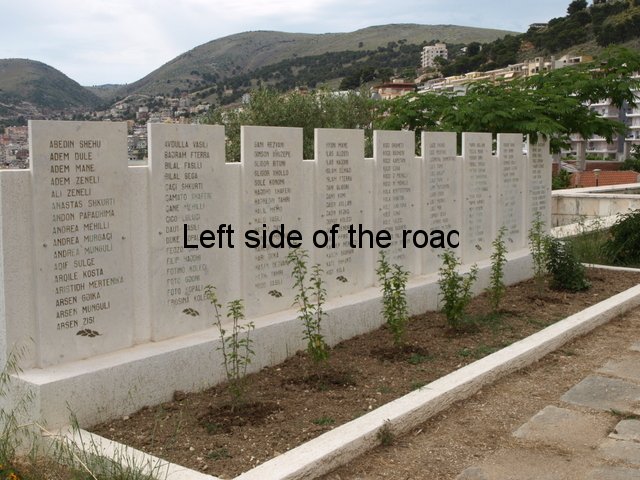 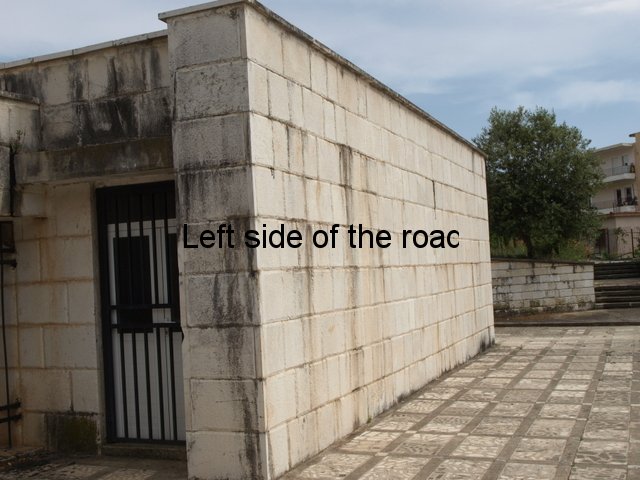 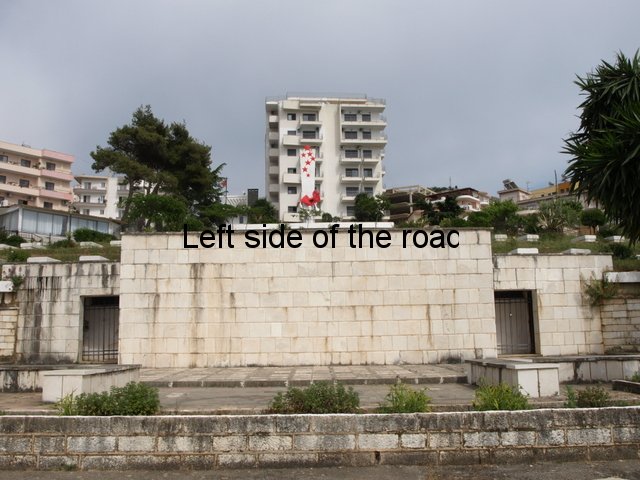 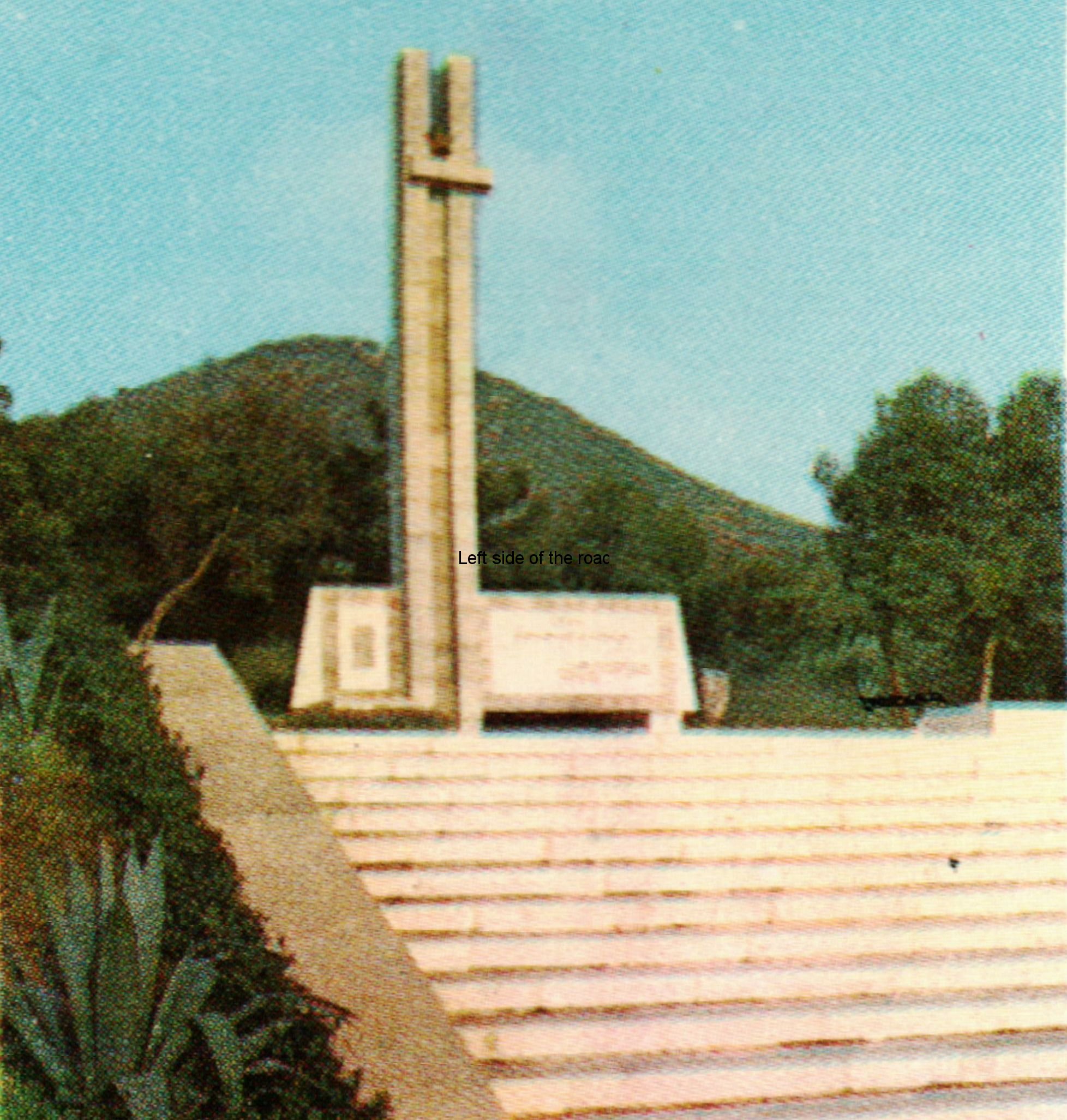