Refugi 307 (an air-raid shelter during the Spanish Civil War, 1936-39) is one of the few existing shelters from that conflict which it’s possible to visit. Situated in the working class district of Poble Sec it’s very close to Montjuic Hill. The opening of these places to the public throughout Catalonia was part of a project called Memorial Democràtic, started under a more left leaning regional government. The right, who’ve regained control of Catalonia, have messed around with the organisation and I’ve found it impossible to discover exact details of the present state of affairs. This shelter is now under the control of the Museu d’Història de Barcelona.

The Spanish Civil War – even though we’re talking about an event which was almost 70 years ago – has still not found a resolution in Catalonia (or even in Spain). This is the reason, I believe, why Memorial Democràtic has become such a political football. Civil wars are more complicated than conventional wars as they tend to arise at times of potentially radical changes in society.

The extreme nature of the hostilities that are an inevitable consequence of this situation means that fears, hatreds and animosities last much, much longer than the actual military hostilities. These are then passed on to future generations and just fester. Although the North Americans always claim the moral high ground when criticising more recent conflicts we only have to look at that country to see that many in the Confederate south have never accepted the victory of the Union – the preponderance of the rebel flag being the most obvious example of this.

History still hasn’t condemned Franco for the murders committed well into the 1950s, such as the public executions in the Camp de la Bota. This was right by the sea but the location has been obliterated and is where the luxurious yachts are now parked in the Barcelona marina. Many families of those killed by the Fascists still won’t speak out even though Franco himself was put in the ground almost 40 years ago. Bizarrely, at least to me, the family of the architect who designed Refugi 307 don’t want his name to appear in a public place, presumably as they fear reprisals from some unknown group of Franco admirers.

It’s long been accepted and understood that the Spanish Civil War was a proving ground for some of the military tactics that were to be used in what came to be known as the Second World War – more properly World War One – Part 2. Blitzgrieg tactics would be used both at the front and on the civilian population. The idea of total war was born where anyone and anything on the opposing side was fair game, however far they might be from the actual fighting.

These tactics of the Nazis were condemned by the British and the Americans as barbaric and many of those tried at Nuremburg were condemned for pursuing this course of action. However, the same tactics when followed by the so-called ‘Allies’, such as the bombing of Dresden when German control of the skies was lost, were not considered war crimes. On the contrary, Arthur ‘Bomber’ Harris, Commander-in-Chief of the RAF Bomber Command towards the end of WWII, was considered a hero, although the erection of a statue to his honour in 1992 was controversial.

When it came to Vietnam B53’s dropping bombs from miles up in the sky onto Hanoi, F111’s destroying thousands of acres of jungle and agricultural land with their napalm bombs and Bell ‘Huey’ helicopters pouring millions of gallons of Agent Orange on to Vietnamese villagers was considered legitimate in the illegitimate war against a population that merely wanted the right to determine their own future, free from foreign interference. And let’s not get on to Afghanistan, Iraq and Libya where hundreds of thousands have died as a consequence of ‘collateral damage’.

But back to Poble Sec.

Refugi 307 is very different from the other air raid shelter it’s possible to visit in the Barcelona city area, the one in Plaça Macià in Sant Adrià – only a short Metro ride (Line 2) from the city centre.

Throughout Barcelona many people would use the basements of the bigger shops and department stores, hotels or the basements of the grand house of the L’Eixample. Poble Sec had none of these close by which meant other means of protection had to be found. A couple of similar shelters were also built in the Gràcia district – at Plaça Diamant and Plaça Revolució.

The air raid shelter below Montjuic is constructed in a manner similar to the galleries found in commercial mines, was started sometime in 1936 at the initiative of the local residents and was predominantly the work of old men, women and children – most of the young men of military age at the front – (why should there be an age limit or a gender separation of fighting for your freedom?) – and was still being extended when the war was lost by the legitimate Republican forces in 1939. It was carved out of the relatively soft sandstone rock of Montjuic hill and then faced with brick. At one time there were three entrances, in actuality now there are two. More than one entrance was necessary to avoid the risk of turning a shelter into a tomb in the event of a bomb blocking the one and only entrance.

The shelter followed a similar pattern to others found throughout the Spanish peninsular. A zigzag design of the tunnels meant that blast shock waves couldn’t go deep into the shelter and there was always a 90 degree turn right by the entrance. It had electric lighting, provided by batteries which could provide power for up to 2 hours, but no means of ventilation so would have become very hot if full. For that reason smoking was banned.

There were male and female toilets (each with its gender defining coloured tiles) constructed close to the principal entrance but as the shelter could take up to 2,000 people by the time of its greatest extent the queues must have been quite long at times. Running water was installed and during the later construction, deeper into the hill, a stream was struck so it was decided to dig a cistern to capture the water. There was also a small infirmary to deal with the small, but potentially serious, injuries of civilians under bombardment such as cuts, bruises and fractures. Anything more serious you would have had to take your chances.

The smaller galleries off the main ones were provided with basic wooden benches as the time spent in the shelters was relatively short, unlike the situation, for example, of the Londoners during the Blitz. Barcelona was being bombarded by Italian planes that were based in Mallorca and the numbers of bombers available were not as great as they were a few years later over British cities and nothing like the Thousand Bomber Raids over Germany from 1942 onwards. The bombers would arrive and then as quickly as possible get out over the Mediterranean away from hostile anti-aircraft fire. The logistics of the situation meant the raids were short and sharp.

An anti-aircraft gun battery was located near the old castle on Montjuic and that might have accorded Poble Sec a bit of added protection. Seemingly the gunners were not seeking to shoot down the planes, just to put the fear of God up the airmen, as a bomber falling on the tightly packed streets of central Barcelona would have had a more devastating effects than a bomb falling.

Being trapped in a tunnel underground isn’t to everyone’s liking and as time went on some people decided to face the consequences of the raids in their own homes rather than worry what was going to happen to those homes. However that might have been the case this shelter, and others like them, most certainly prevented the death toll amongst civilians from being much higher.

The story goes that British engineers came to visit this shelter (although this might be apocryphal as I’ve heard the same story at other shelters elsewhere in Catalonia) as they knew there was a great likelihood that British cities would face the same danger from the German Nazis in a future war. If that was the thinking in Britain at the time the question has to be asked: Why was it the British didn’t fight on the side of the legitimate Republican government? That’s a rhetorical question as the British establishment has not in the past, and doesn’t seem to at present, realise that once you let out the dogs of war they don’t always attack the ones you want and end up turning on their previous ‘masters’.

Neither did the Spanish/Catalonian engineering experience seem to travel to Britain. I’m not aware of any such gallery shelters being built anywhere. Londoners had the Underground but the rest of the country had to rely on individual Anderson shelters in back gardens or basements in big buildings. As I wrote that I thought: Why no community initiative to build their own shelters as there was in Spain?

The life of the shelter as a shelter was relatively short. After the war a family took over the most recent area of construction for their house, with a quite ingenious system of getting rid of the smoke, as well as drawing the fire, for the oven. Later the tunnels were used for the cultivation of mushrooms.

Now you can visit it. Although an understanding of Spanish/Catalan would be useful, for the details, a visit of the place would still be worth it to get a feeling of how Barcelonans survived the bombings.

And afterwards, on returning to the centre of Barcelona, you could always call into Le Nou for a drink or a meal.

Nearest Metro: Paral.lel on Lines 2 and 5.

The tour lasts between 45 minutes and an hour. 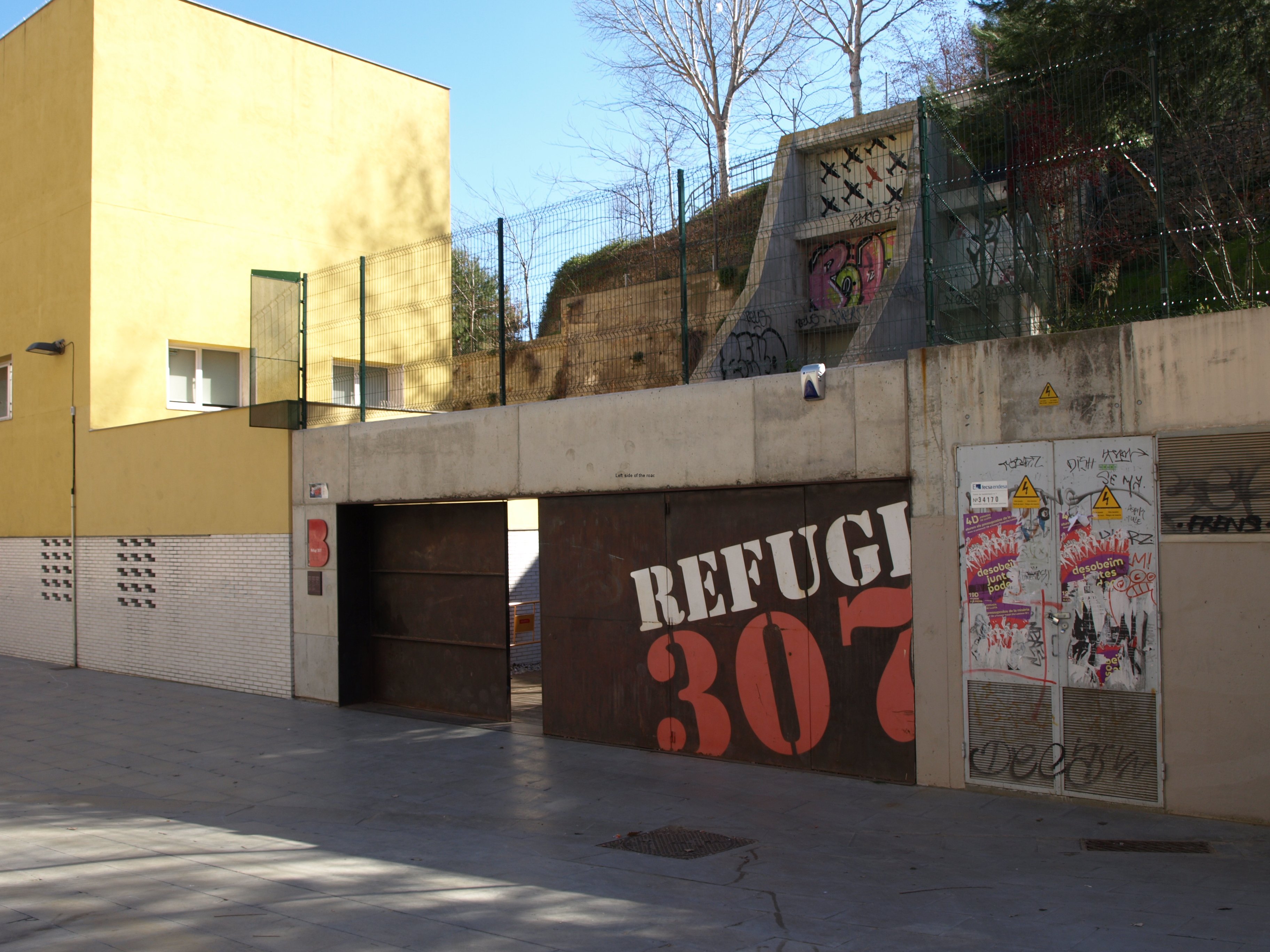 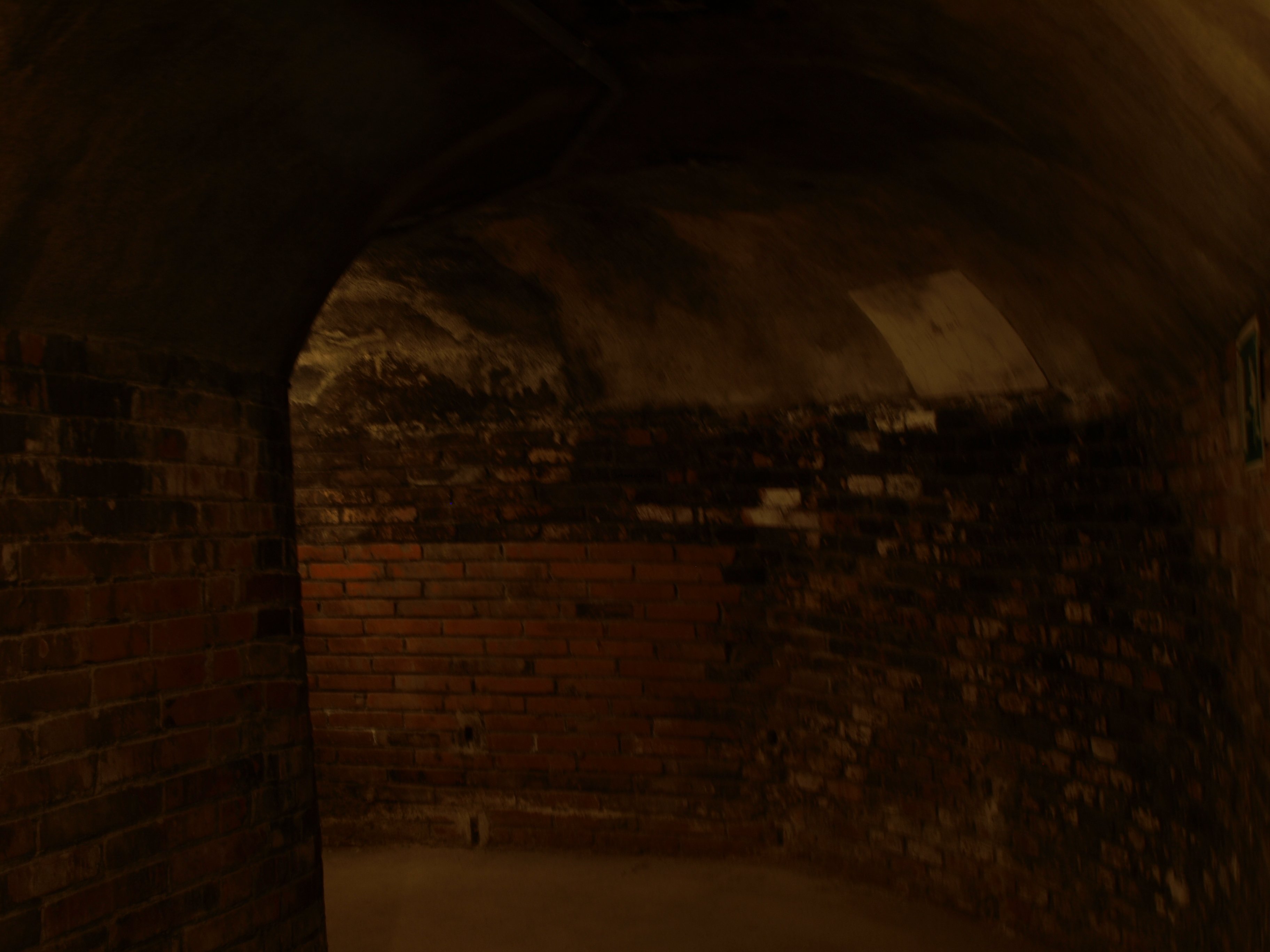 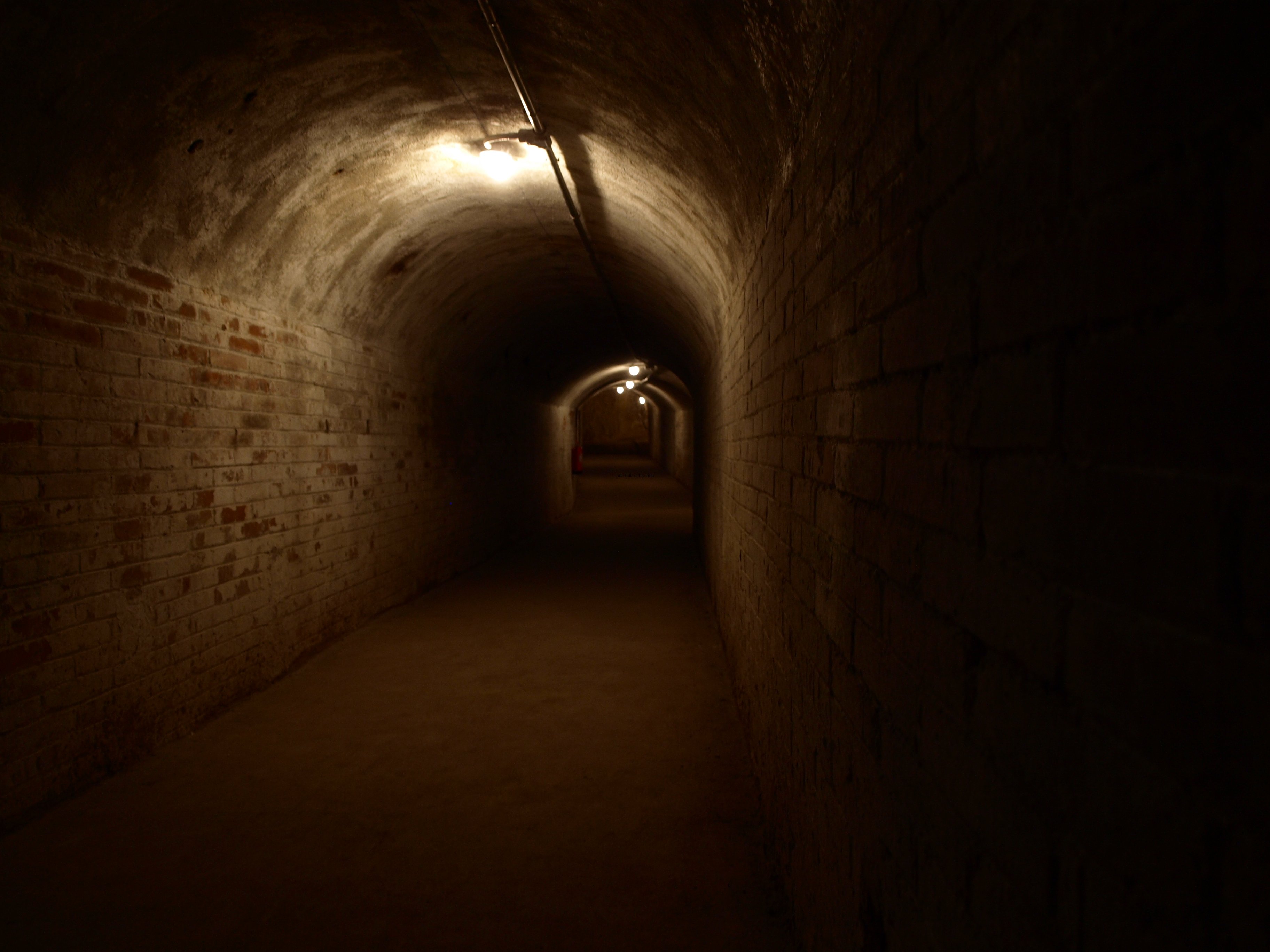 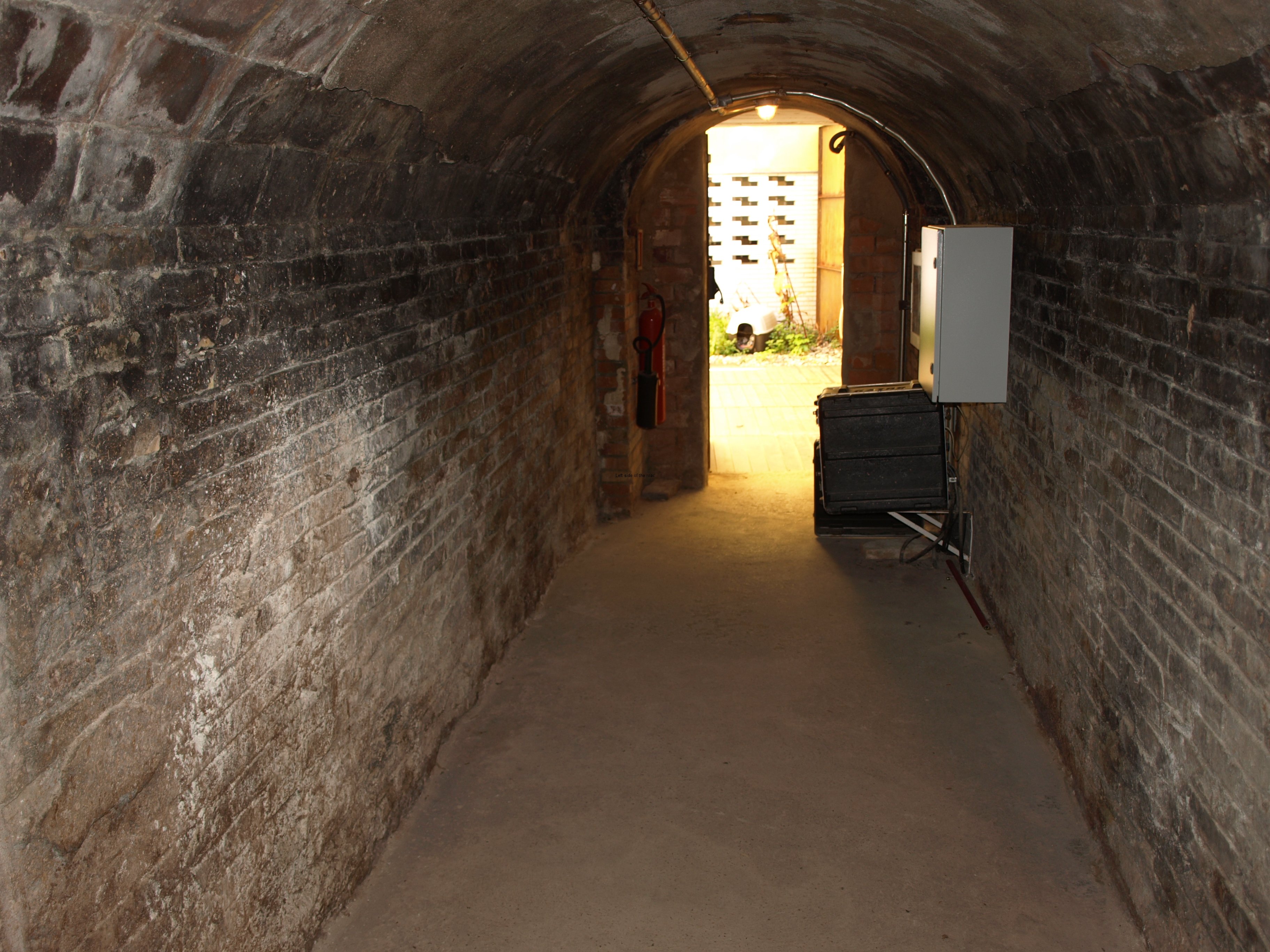 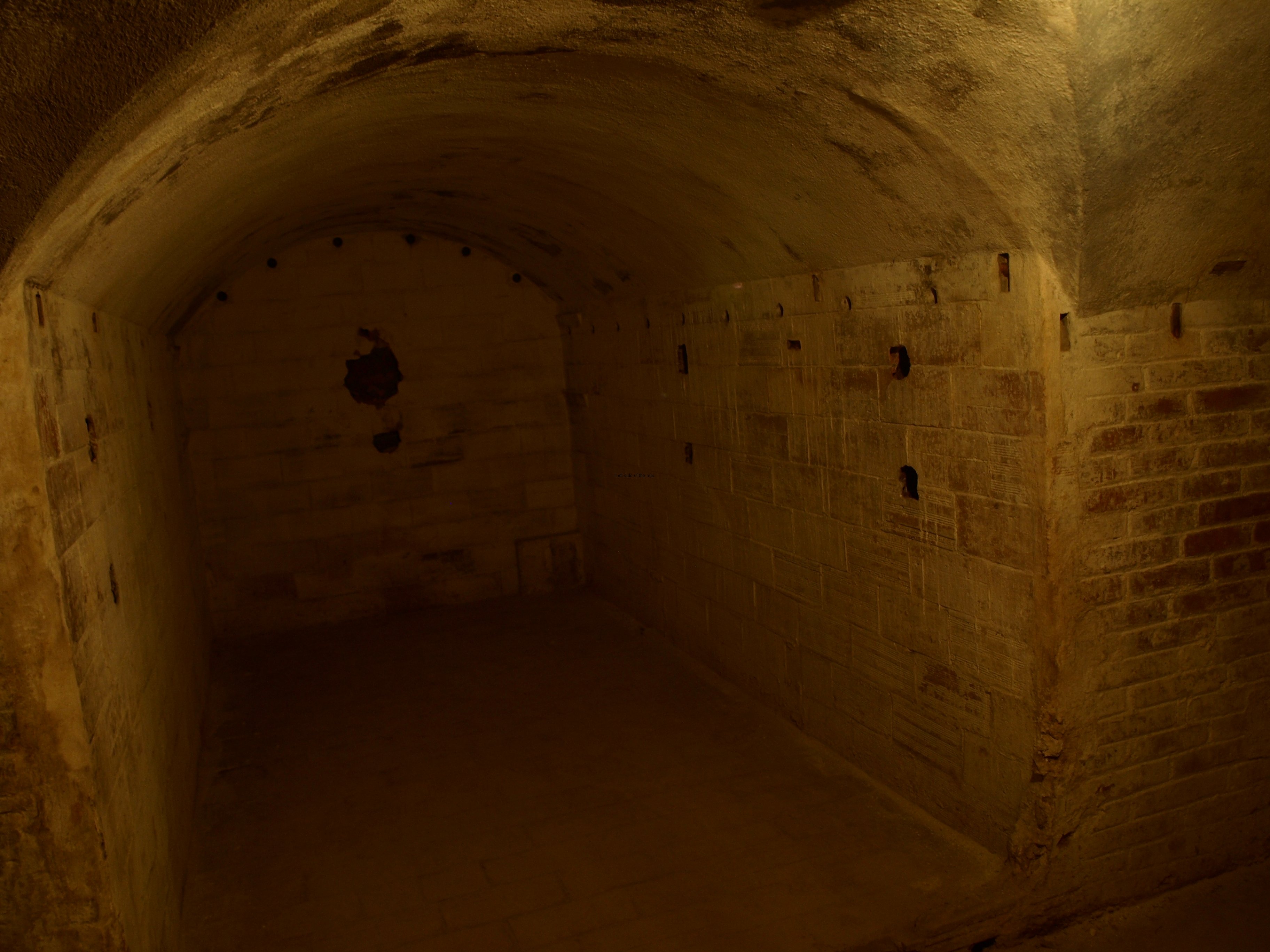 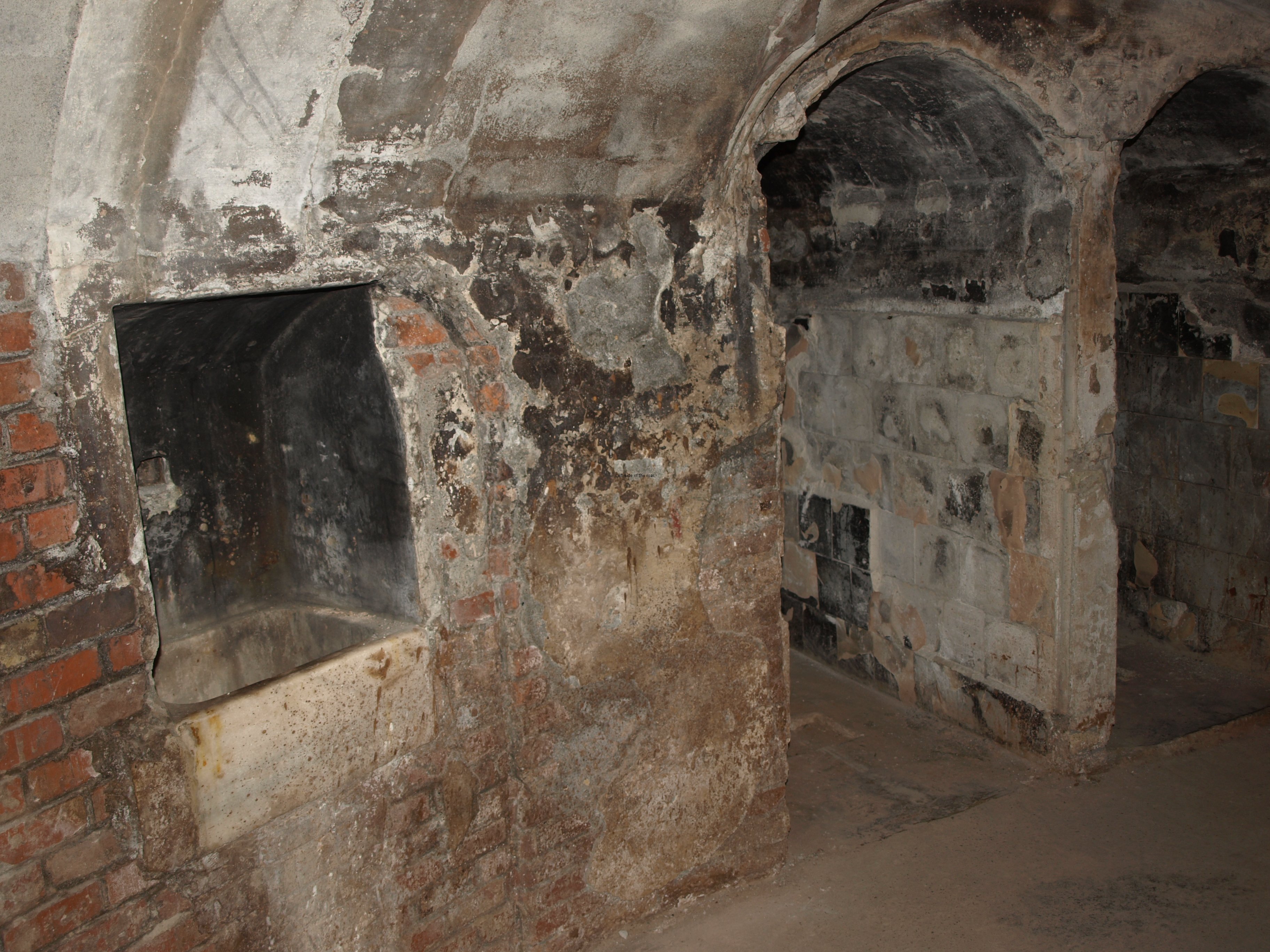 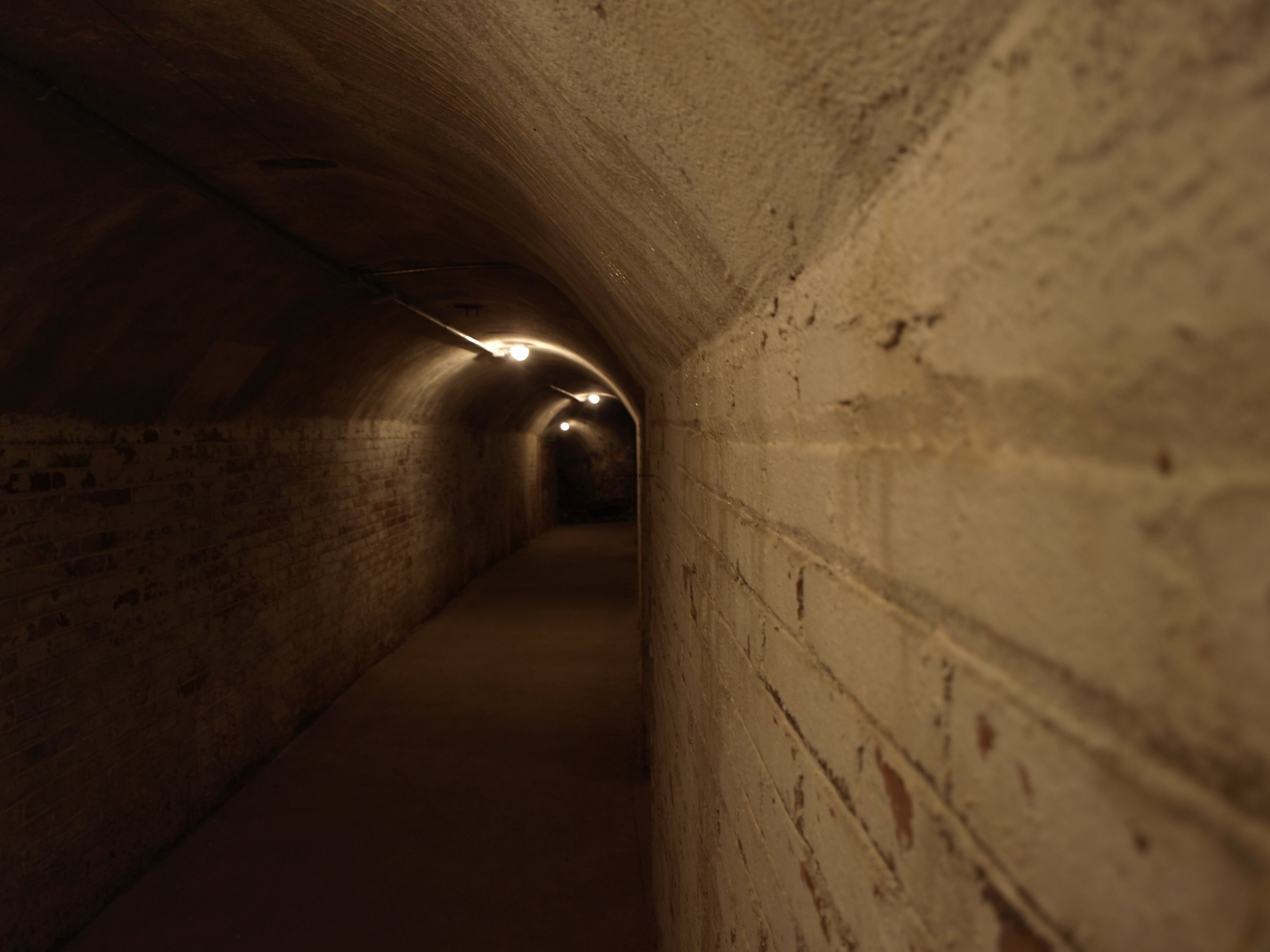 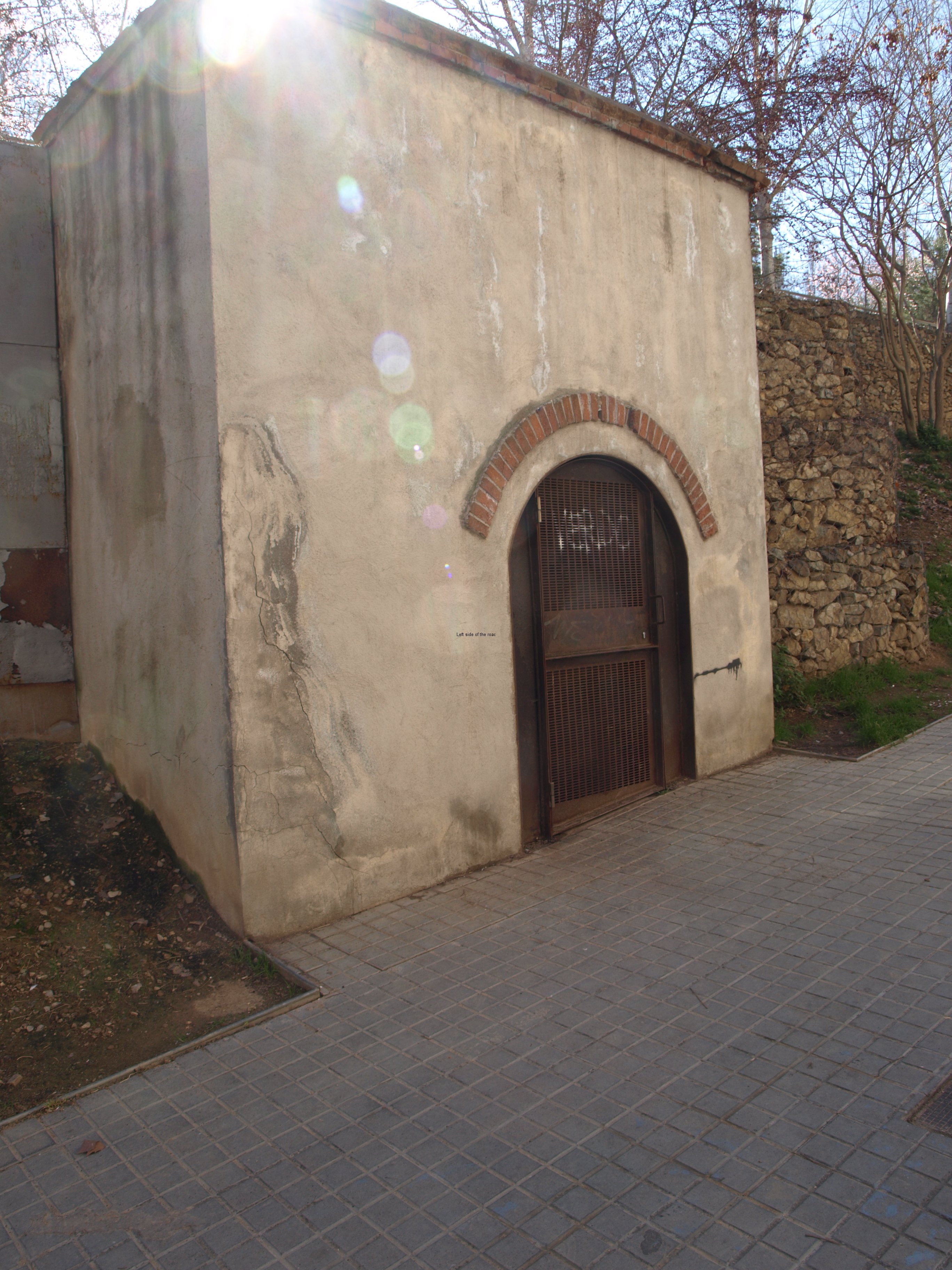 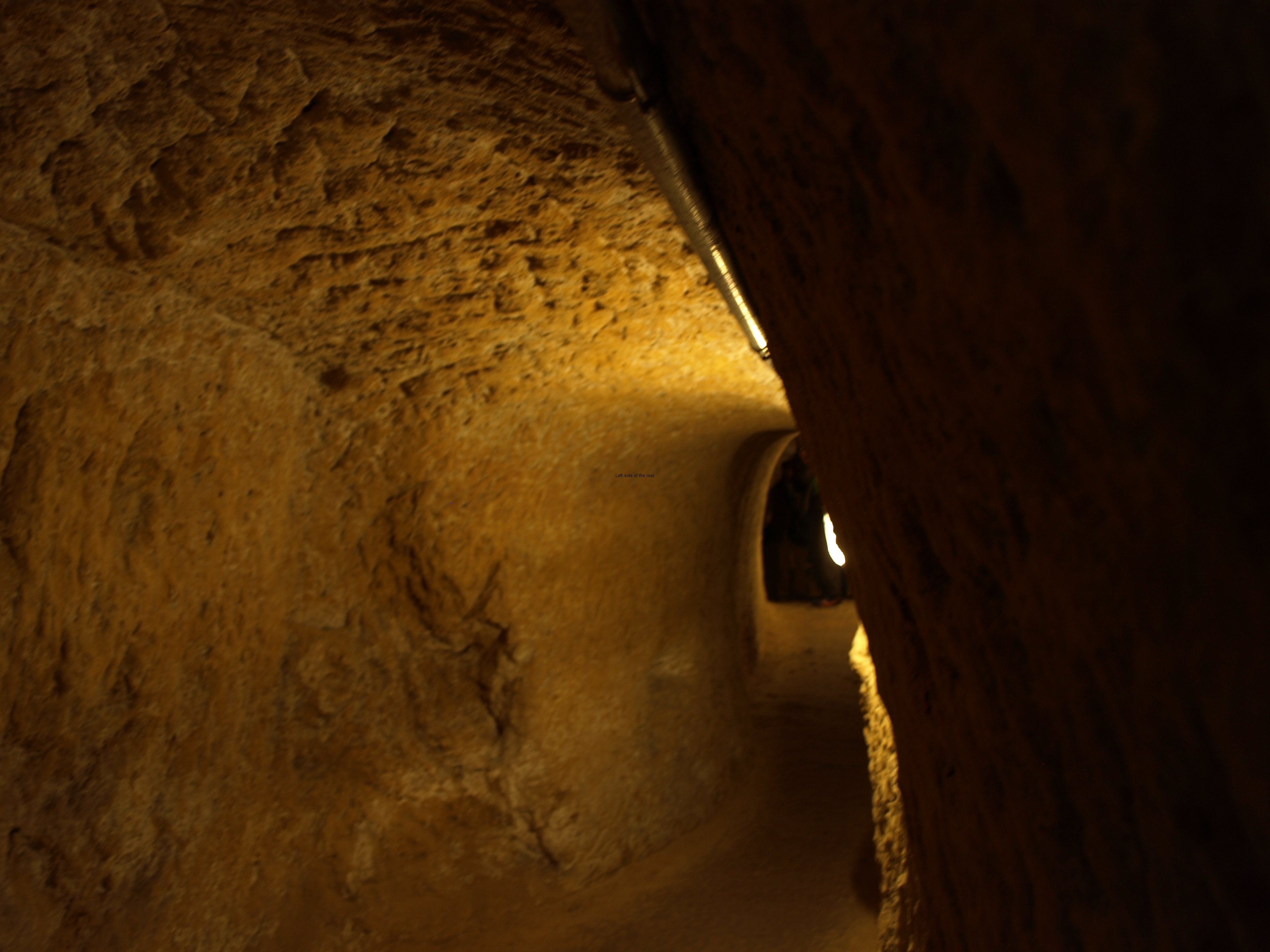 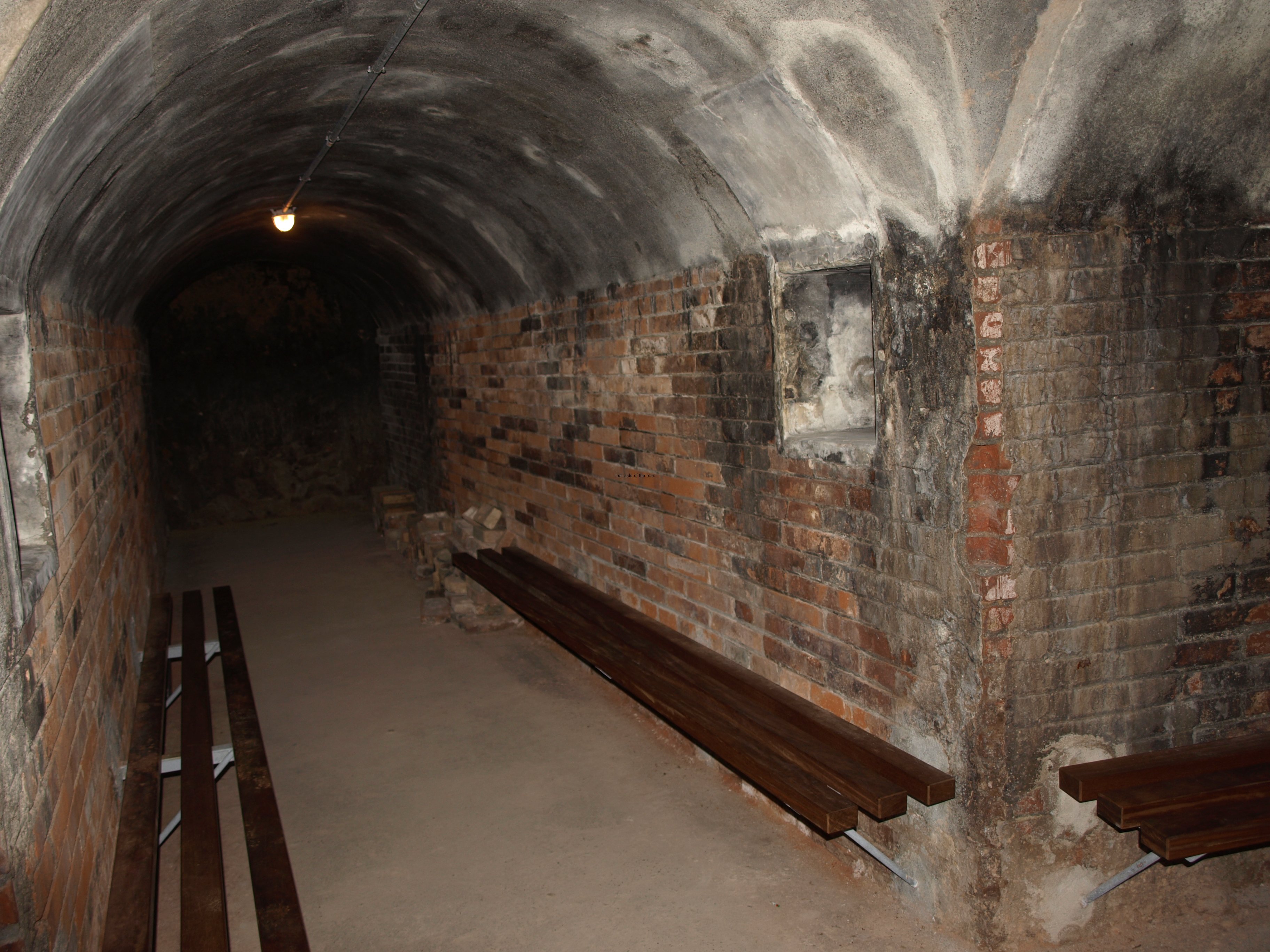 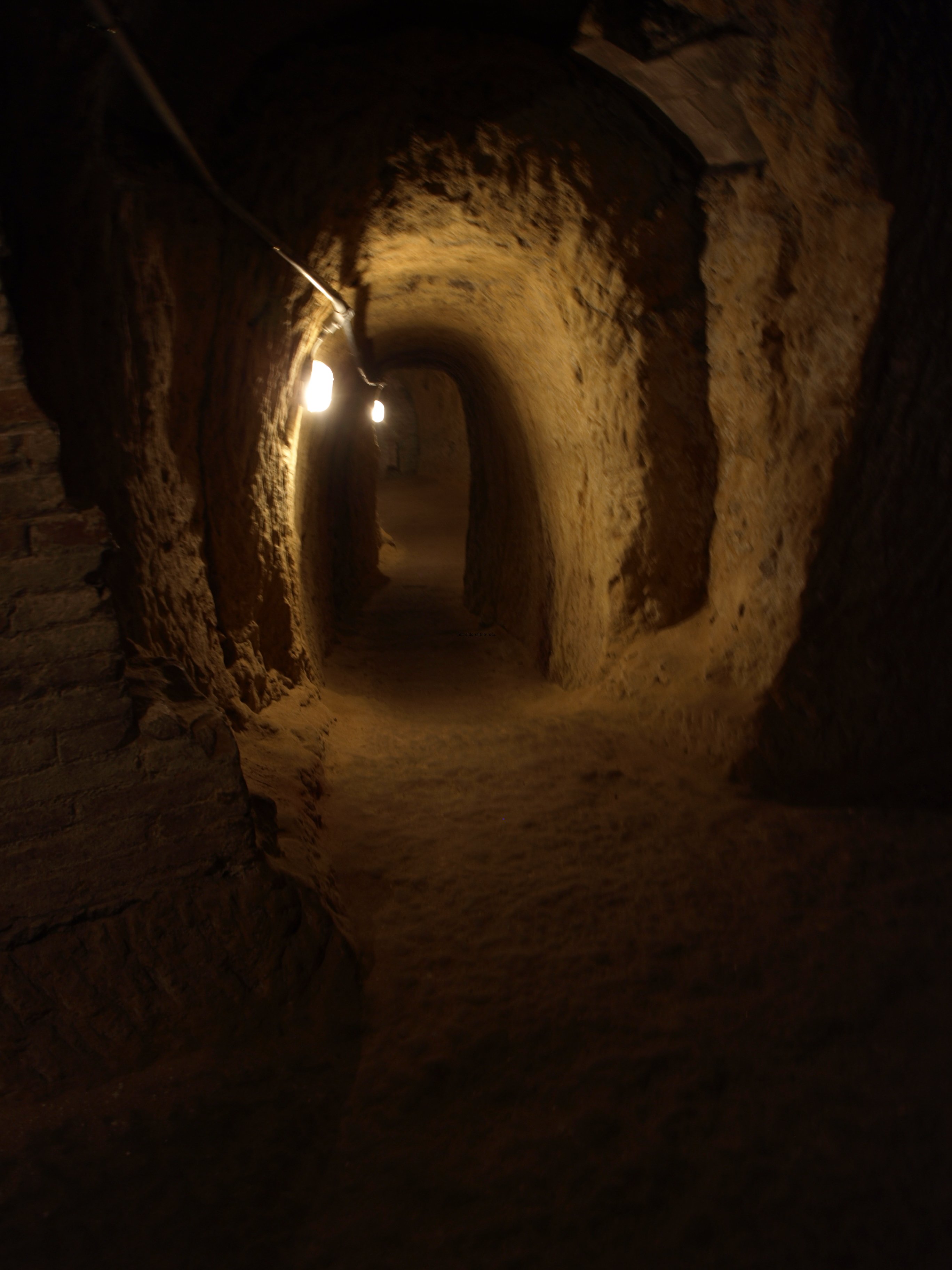 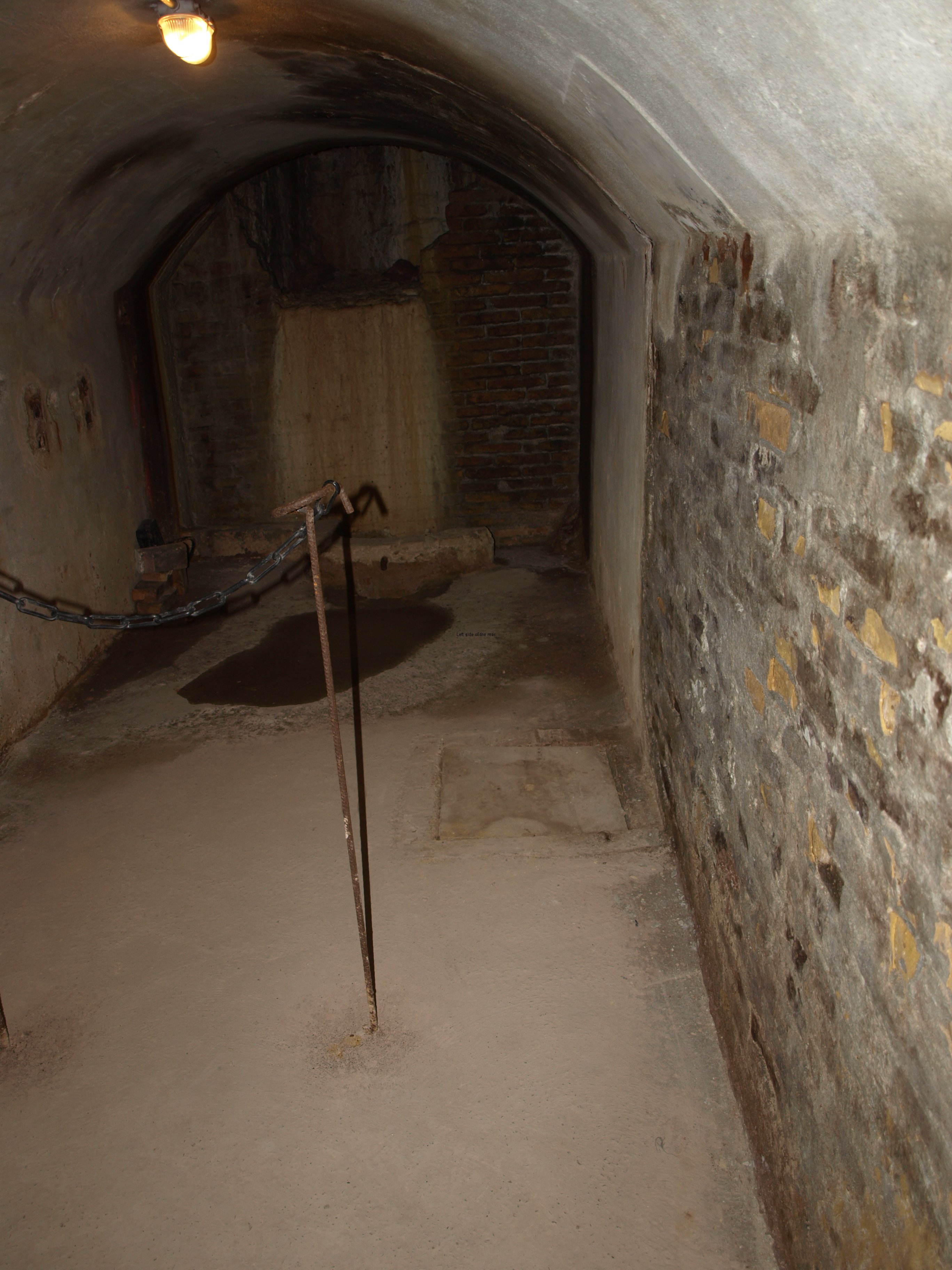 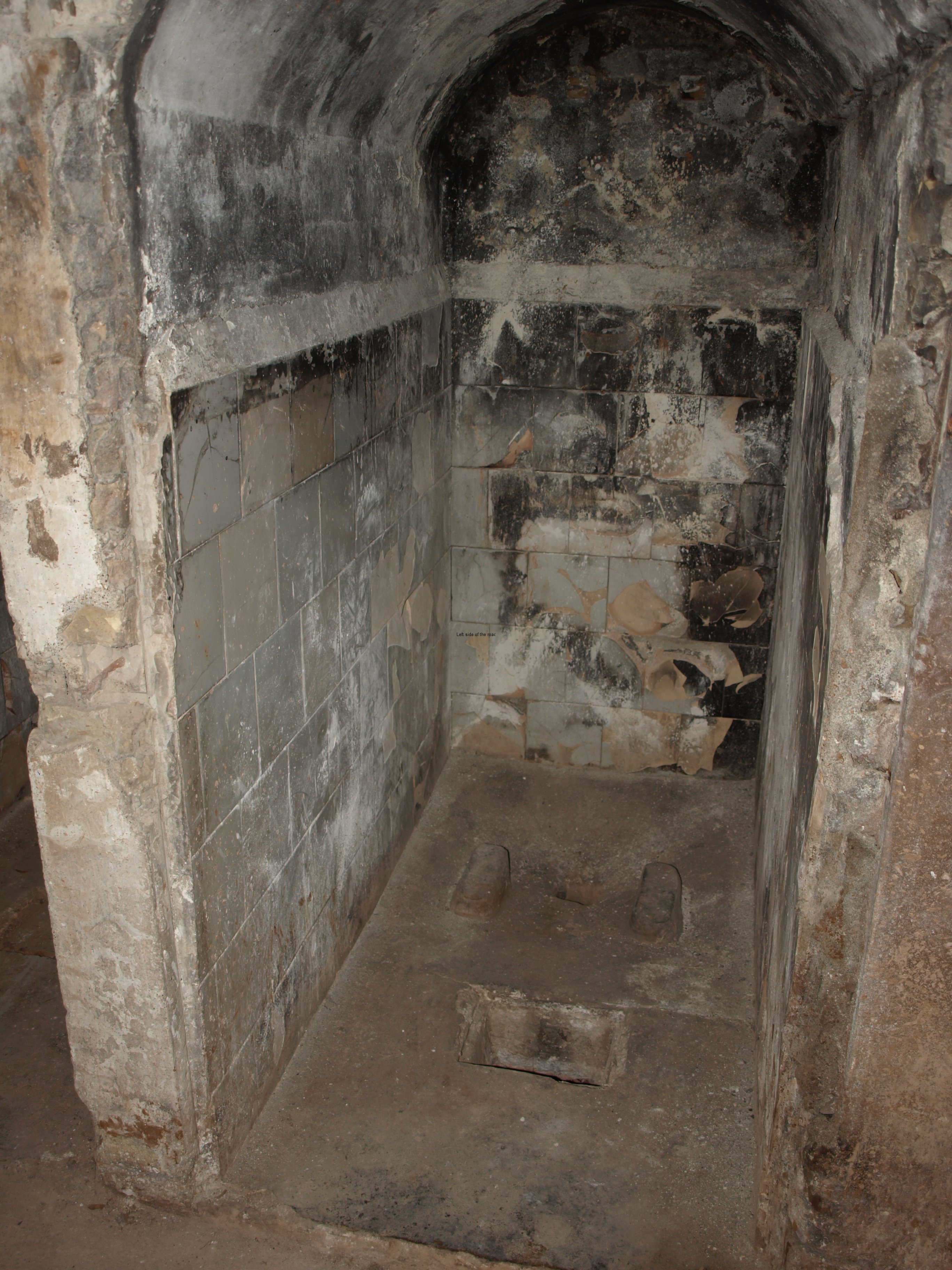