Corpus Christi Church as part of the Segovia City Walls

A short walk, peaceful and crowd free, which explores Segovia’s Jewish past providing a perspective on the ancient town missed by most visitors.

In Segovia it is impossible to miss the Roman aqueduct but most of the thousands of visitors to the city are totally unaware of an area of narrow, medieval streets which bore the brunt of one of the most traumatic episodes in Spain’s history.

In Granada, on March 31st 1492, just a few months after the final defeat of the Moors, the ‘Catholic Monarchs’, Isabel and Ferdinand, promulgated The Edict of Expulsion, decreeing that the Jews in all of Spain had four months to either convert to Christianity or leave the country. This ended almost 300 years of Jewish presence in Segovia.

However, now there’s a growing movement to recognise the role of the Jewish community in the development of the city and visitors have the opportunity to re-discover something of the past.

A Jewish community can be traced back to 1215 and for almost 200 years there were few restrictions on their place of residence. That changed in 1412 when they were restricted to the area, more or less, around the present Cathedral but things worsened in 1481 when they were forced into much more of a ‘ghetto’, the area of this walking tour.

The start is in the small square of Corpus at the top end of Calle de Juan Bravo. Here there is a fork in the road and the entrance to the Judería Vieja is the one to the left – the quieter of the two, this is not a walk that will be hampered by crowds of people!

Before entering the narrow street go through a Gothic arch, on the left, taking you to the entrance of the Corpus Christi church, which used to be the Principal Synagogue, but only for a few decades. This building has had a troubled past. It was a synagogue by 1373 but was expropriated by the Catholic Church after a supposed and unproven act of profanation around 1419 – a painting in the church depicts the alleged sacrilege. A disastrous fire in 1899 destroyed virtually all remnants of the old synagogue and it was rebuilt at the beginning of the 20th century. Further work has attempted to recapture much of the old Synagogue with its horseshoe arches, the capitals decorated with vegetable and geometric designs and the beautiful, wooden ceiling.

On returning to the street turn left into the Judería Vieja and in a few steps go down left through the archway (the Puerta del Sol). From here you have a view of the other side of the church, forming part of the city walls.

Return to the Judería Vieja and continue along to number 12, the Didactic Centre of the Jewish Quarter (Centro Didáctico de la Judería). This Education Centre is based in a building that was part of the property of Abraham Seneor. Very rich and powerful he had enemies in both the Jewish and Christian communities and by the time of his death in 1493 had probably attained more influence in the Spanish court than any Jew ever before – quite amazing when you remember that this was at the time of Isabel and Ferdinand, under whose reign the Inquisition was initiated and who decreed the expulsion of the Jews.

Established in 2004 by the Segovia City Council, the Centre houses a small exhibition space which tells of the history of the Jews in Segovia and Spain. The information boards and the two video presentations (one in 3D) are in both Spanish and English and are very much directed to those who know little about Jewish history or culture. The centre also stages discussions and conferences which address Spain’s Jewish past.

Turn left on leaving the centre, reach the corner of the Cathedral and then follow the road as it goes quite steeply downhill (Calle de Martinez Campos) towards the Puerta de San Andrés. Here there is a museum that gives the history of the city wall. The narrow, stepped street that goes up hill to the right is the Judería Nueva, a street that is virtually unchanged from the time of the Jewish presence more than 500 years ago.

From the gate continue along the lower road to what is now the Museum of Segovia, housed in a building that was originally the Jewish slaughterhouse.

Return to the Puerta de San Andrés but this time go through the gate and outside the wall. Take the path immediately on the right hand side and within seconds you get a fine view of the abattoir, standing on a rocky outcrop over on the right. From here it is easy to understand the reason for its location, the blood and offal would be just thrown down into the gully.

Follow the wide path downhill and then, in less than a minute, the narrow path, indicated by a stone pillar with a carved menorah (the seven-branched candle holder), that goes down to the left. Cross the small bridge and then straight ahead as the path climbs, go through a tunnel beneath the road to come out to the old Jewish cemetery. This has been excavated a number of times but not a lot of information has been gained from these investigations – the gravestones having been looted soon after the remaining Jews had converted to Christianity.

However, it’s possible to see the different methods of burial used, the limestone being carved in the shape of a human body or a cave-like room being created for multiple burials. What can be seen is that all the identifiable graves point in the direction of Jerusalem, with the heads orientated to the west and the feet towards the east.

Another poignant feature of the cemetery is that it was here that those who refused to convert spent their last days in the area, before leaving both Segovia, and then Spain, forever. Their last view of the place they had called home being one of the sun shining on the magnificent, golden, medieval walls.

After a relatively short walk in distance, but one that is full of interest, together with the walk down to the dry river bed and up to the cemetery (that has to be done twice!) when you return to within the city walls you will be looking for a good place to eat and drink.

This can be a bit tricky in a town whose culinary speciality is roast, suckling pig but there are a number of restaurants that are now offering Sephardic menus and this gets extended every September, for a weekend, when many restaurants provide a Jewish orientated menu – some even offering kosher wine.

The Corpus Christi Church/Synagogue, Puerta de San Andrés and the Segovia Museum are all closed on Mondays.

A recent book, in English, about the history of the Jews in Segovia providing more information than I have been able to give here is the ‘Jewry Guide to Segovia’ by Bonifacio Bartolomé Herrero, available in the Centro Didáctico, priced €16. 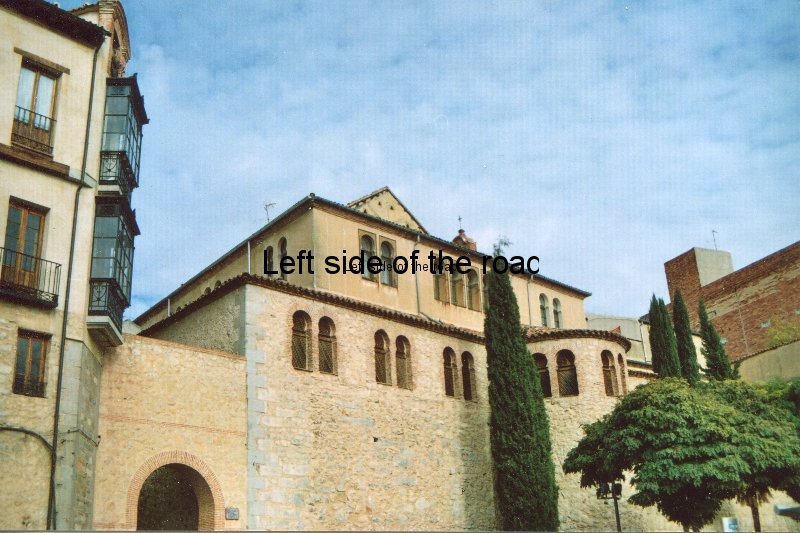 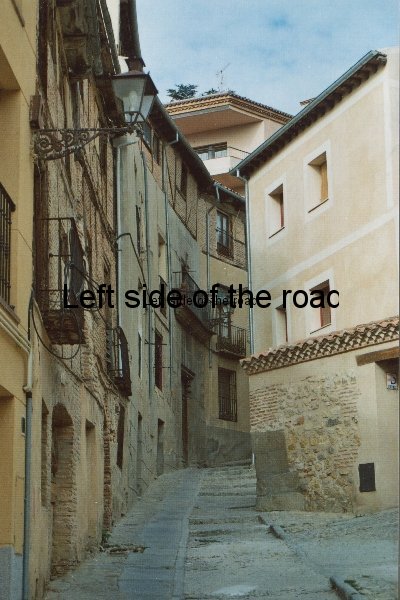 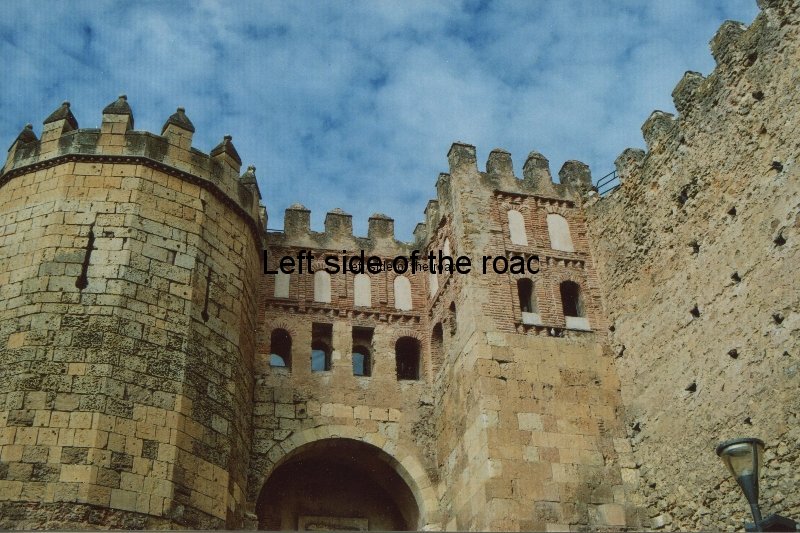 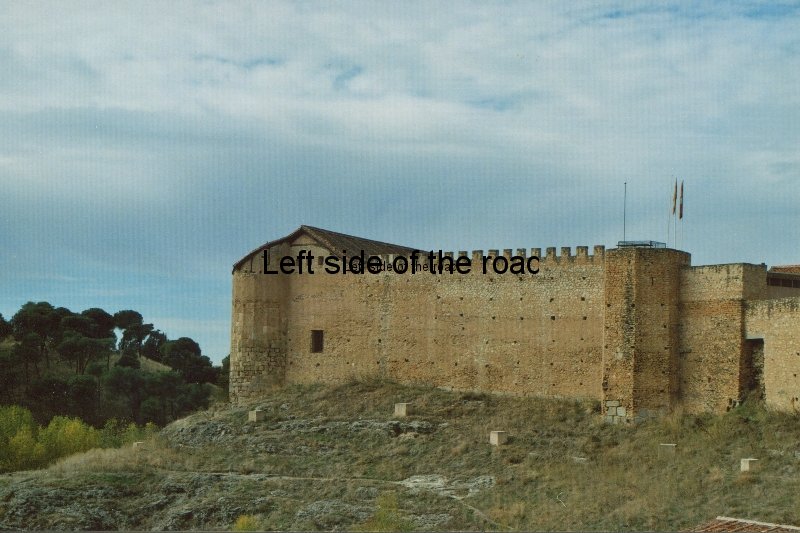 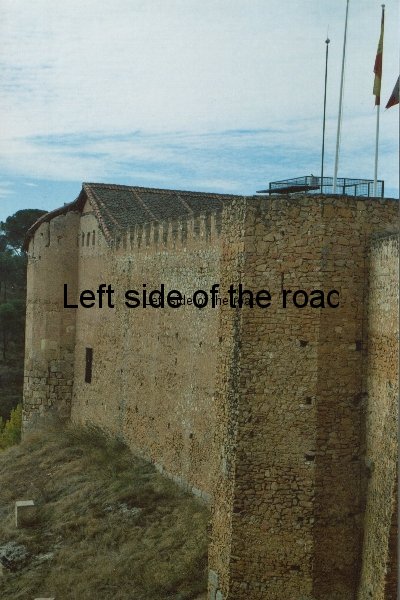 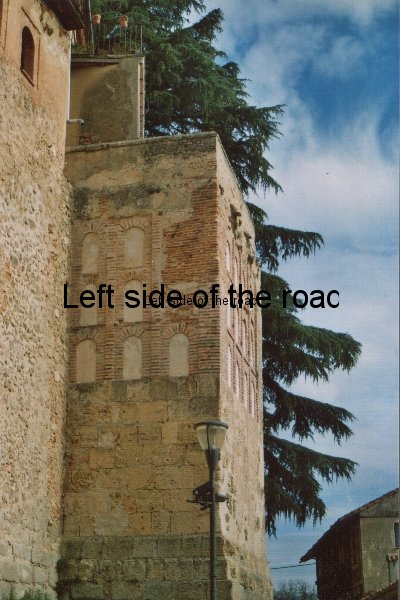 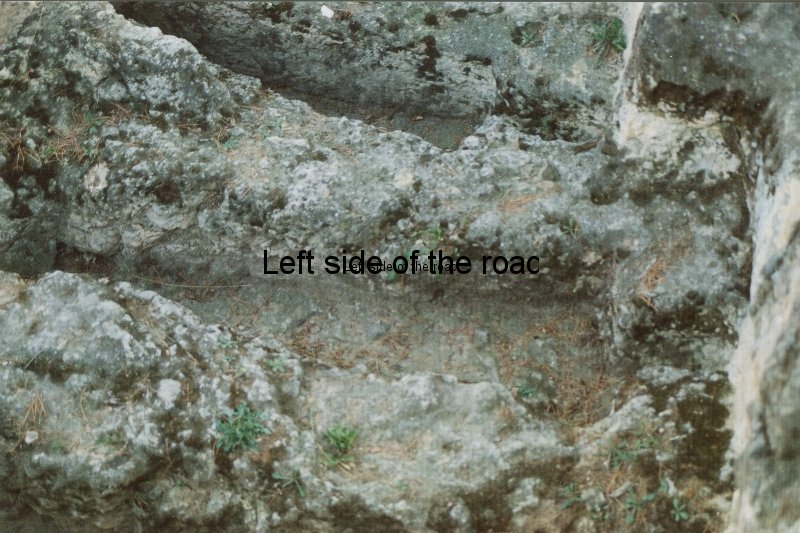 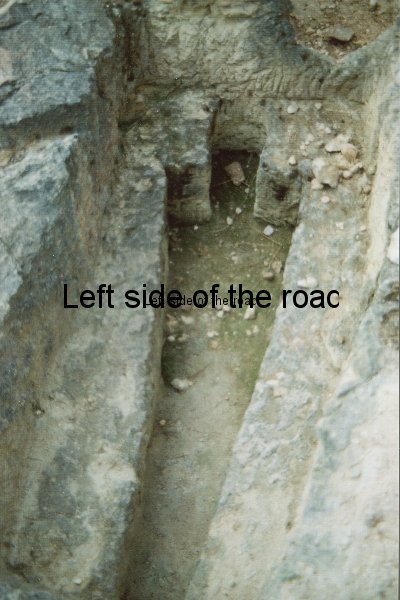 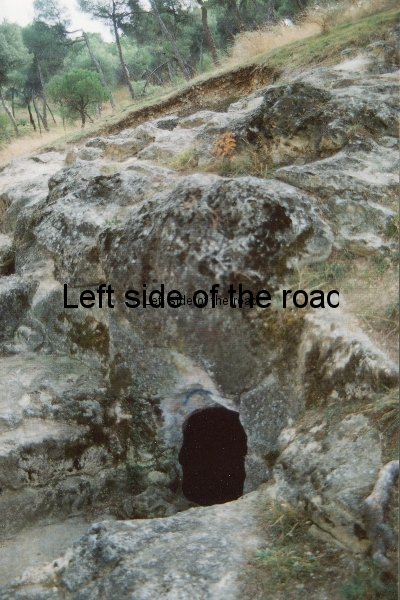 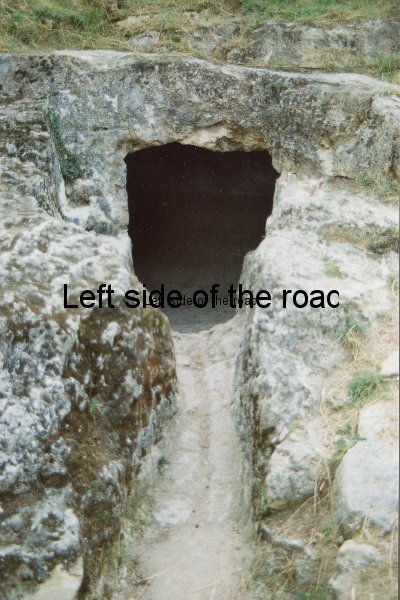 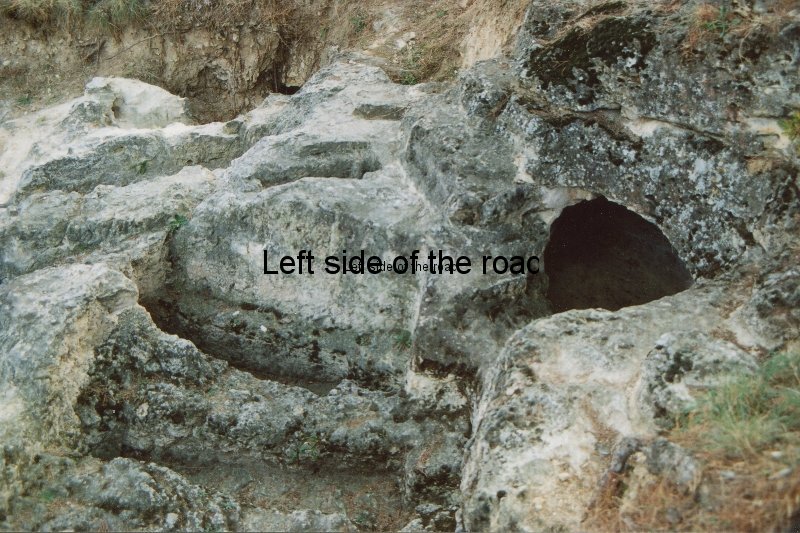 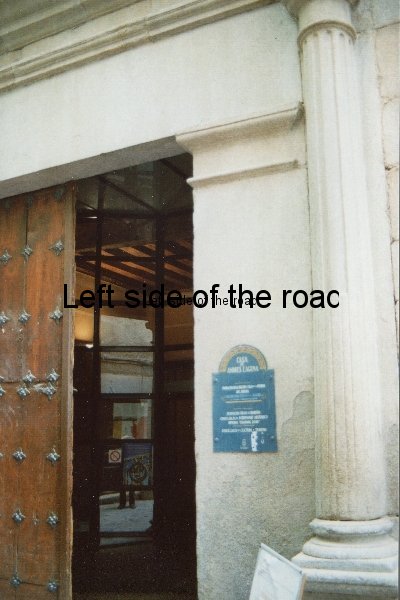 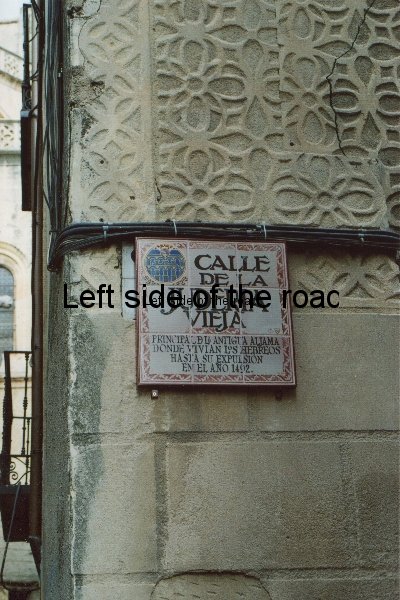 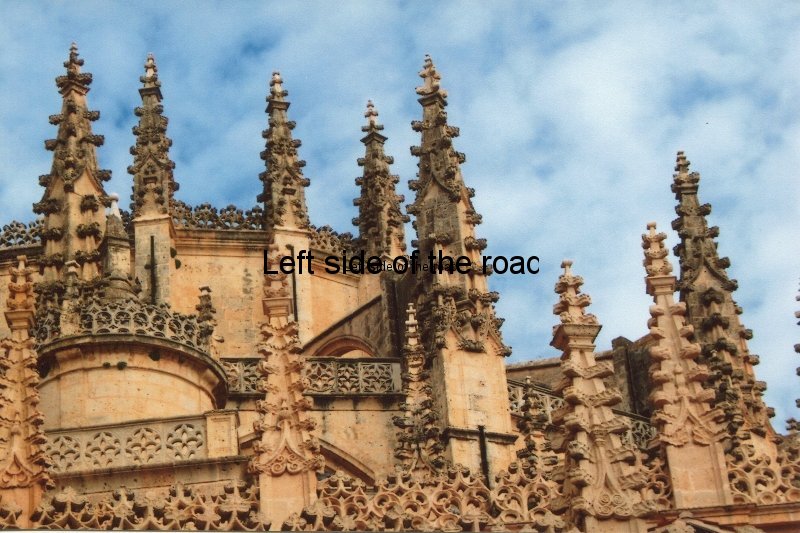 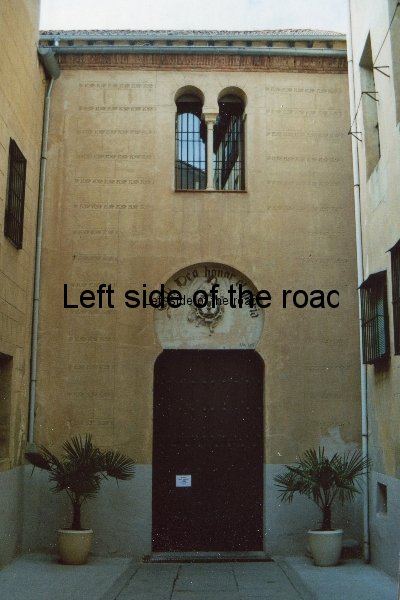