All the major towns in Albania will have a Martyrs’ Cemetery and the one for Elbasan is towards the east of the town centre. When it was constructed it probably would have been very much in the countryside, the built-up area around it now seems to be relatively recent, within the the last 20 years or so.

It’s accessed by a gateway from the road and you go through an arch and along a tree line path which then comes out to a very wide (virtually the whole width of the site) parade ground. On the right edge of this parade ground can be found the museum building. This is the space that would have been filled with people during significant dates such as Martyrs’ Day (5th May) and Liberation Day (29th November).

Moving forward there are 5 steps up to another flat area. On the wall on both sides of these steps a large star, now painted red, faces the visitor. Just above these stars, and therefore flanking the approach, are two very old, tall and established palm trees. Unfortunately, the one on the right is defunct but that on the left is looking very healthy indeed. The tombs to the fallen are to the left and the right of the steps, five rows on either side, perpendicular to the principal monument. In the centre of this space (which is longer than the parade ground below) are two flower beds, containing both shrubs and flowering plants. These have the effect of breaking up this central space and channel anyone who is approaching the monument on wreath laying commemorations.

In front of you is the monument itself, constructed on a platform that’s reached via 3 wide and 10 normal steps from the previous level. The lapidar consists of a tall, narrow obelisk on the left to which is fixed a concrete panel at the lower part, extending about 5 metres to the right at 90 degrees. This structure is at the very back of the platform.

The obelisk gives the impression it’s divided into two parts but is joined together by a middle section that is inset slightly. The left-hand side is slightly taller than the right. There’s nothing there now but I would have assumed that somewhere at the top of that pillar there would have been a star, perhaps a stand alone Red Star attached at the very top. This obelisk is wider at the bottom than it is at the top a fact which can only be appreciated by observing at it from the side.

The large, rectangular, concrete panel extends from the bottom section of the obelisk. This is about 5 metres long and 2 metres high. The bottom of the panel is raised off the ground and towards the right-hand side it rests on a concrete block which spreads out diagonally downwards to the platform floor. This is both functional but also adds another level of aestheticism to the simple design.

This panel has seven, equidistant horizontal ribs cut into the concrete which are interrupted by a large rectangular box towards the right edge. At the top of this box, in large red letters are the words ‘Dëshmorë të kombit’ which translate as ‘Martyrs of the Nation’. Beneath this heading, in seven columns, is a list of names in alphabetical order of the first name. These names are in black.

This list and heading are probably not original. There has obviously been an attempt to restore the slogan and the list but it hasn’t been completed by a professional artist, more by someone keen to reinstate what had existed when the monument was first inaugurated.

The same goes for the colouring. The obelisk, up to the height of the panel, has been whitewashed as has the façade of the panel itself. The lines in the panel have been coloured in red. This would have unlikely to have been the case originally. Most lapidars were not painted – apart from possibly the highlighting of the red star. It also quite possible that the monument suffered from vandalism in the 1990s and this colouring has been added during some ‘restoration’ process.

From the highest platform two wings protrude back towards the garden and entrance to end at the point that the final set of steps start. On the left-hand side, about 7 or 8 metres in front of the obelisk and slightly to its left is a reverted, truncated pyramid which is the Eternal Flame. This has also been painted white and there’s a star which has been cut into the concrete near the top – this having been highlighted in red.

At the base of this structure a red band has been painted on all four sides. The area surrounding the Eternal Flame is splattered with white paint, indicating more enthusiasm than skill.

I don’t believe the Eternal Flames were ever actually ‘eternal’ and were only lit on special occasions.

There are approximately 25 tombs in each row, making it a monument to roughly 250 partisans who fell in the National Liberation War – there’s a similar number of names on the large panel.

Unfortunately, the condition of the tombs in some of the Martyrs’ Cemeteries can be quite variable, but in Elbasan they all seem to be in a very good condition. The grass was obviously being regularly attended to and free from weeds or any wind-blown rubbish. There were bright, red flowers growing (at the time of my visit) at the head of virtually every tomb. In some other places there might be the occasional artificial flower laid by a family member but in Elbasan everyone was treated with the same level of respect – by the community, by the municipality.

The letters on the plaques bearing the name of the individuals had been highlighted in red – as were the stars that seemed to be on most tombs. This work of highlighting in red again doesn’t look professionally done but, at least, the work was carried out with feeling.

The day I visited this Cemetery, there were two or three women who were generally cleaning and tending to the gardens and the overall impression here, which unfortunately is not the case everywhere, is one of cleanliness and an element of respect.

In the more substantial Martyrs’ Cemeteries throughout Albania there is very often a small building which would at one time have been a museum. Unfortunately, I have yet to visit any cemetery where the museum is open as a museum or where there is anything other than a few old photos to see. (There seem to have been developments at the cemetery in Pogradec but on my last visit I wasn’t able to find out either way.)

In Elbasan the museum building is empty of anything that would have told the story of the National Liberation War. However, the room itself is clean – which is not always the case. For example, the museum which is at the entrance to the Cemetery in Kruja was filthy and there was obviously some dead animal rotting away inside at the time of my visit.

However, back to Elbasan. On the wall facing the entrance are the words Lavdi Deshmoreve (meaning Glory to the Martyrs) attached to the wall in large red letter. The two words are separated by a large red star. There is also a red star high up in the centre of each of the side walls.

The only articles in the room itself were two busts of People’s Heroes. In one back corner was a bust of Qemal Stafa. He was the leader of the youth wing of the Communist Party of Albania (later to be renamed the Party of Labour of Albania) and one of its founding members. He was killed by the Italian fascists on 5th May 1942 in Tirana.

Unfortunately, I don’t know the name of the other male depicted in the bust which was in the other corner.

To the east of the main town, on Rruga Kozma Naska, just after Rinia Park. This road runs parallel and slightly to the north, more or less, of the main road heading in the direction to Librazhd. 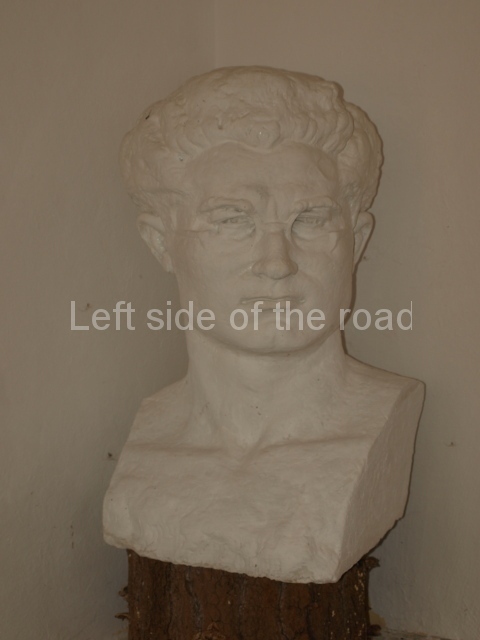 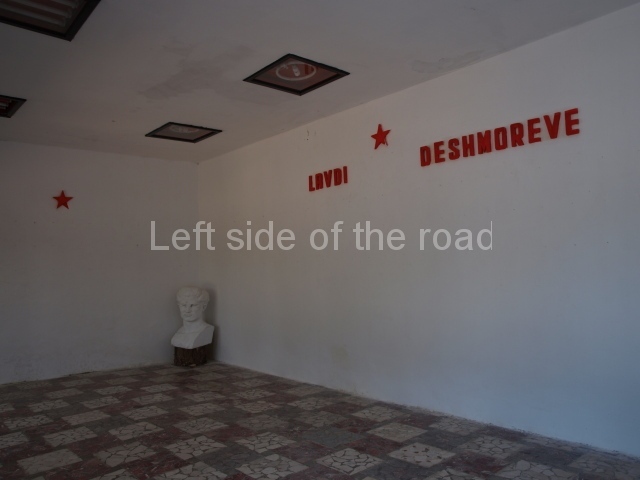 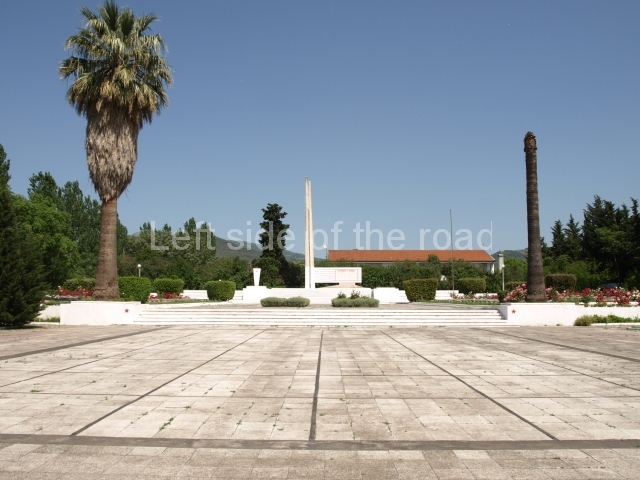 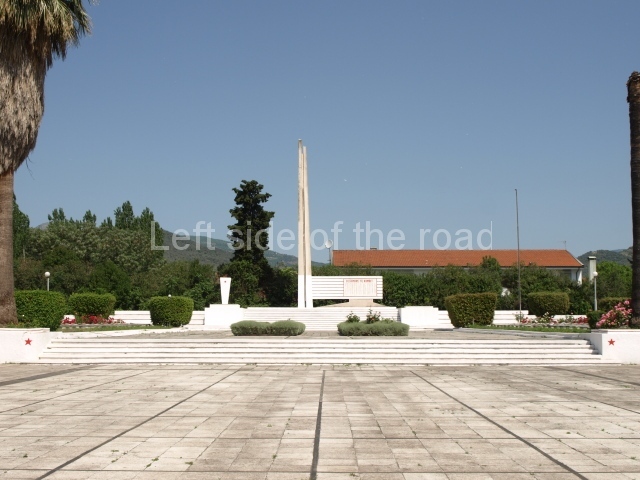 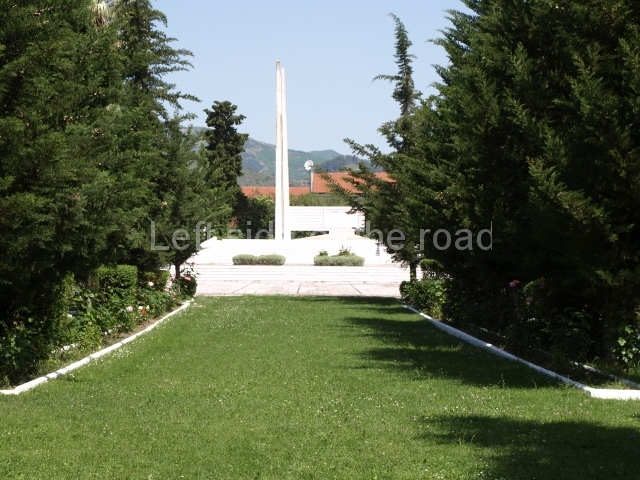 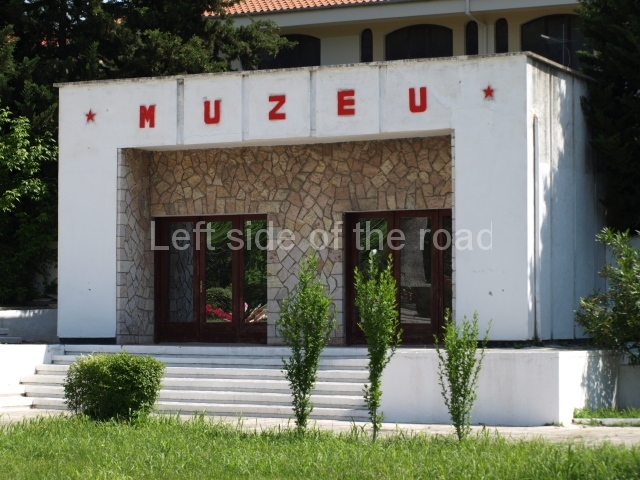 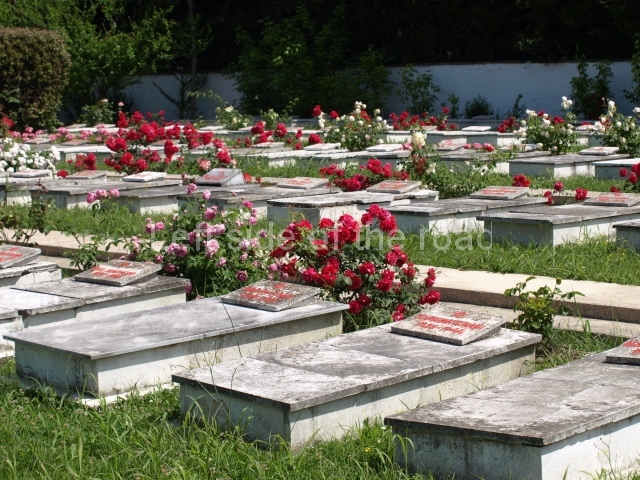 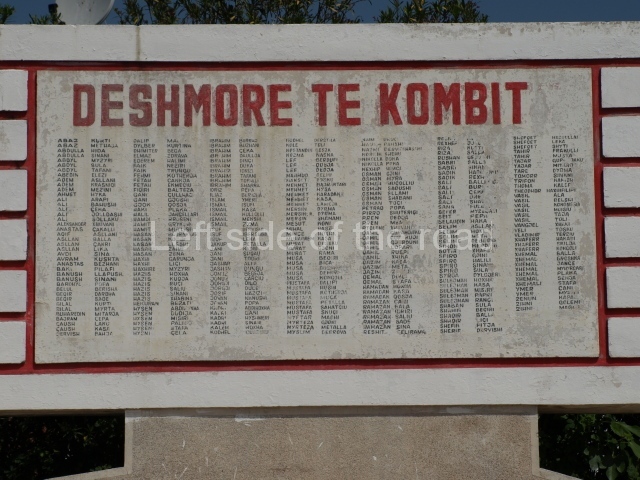 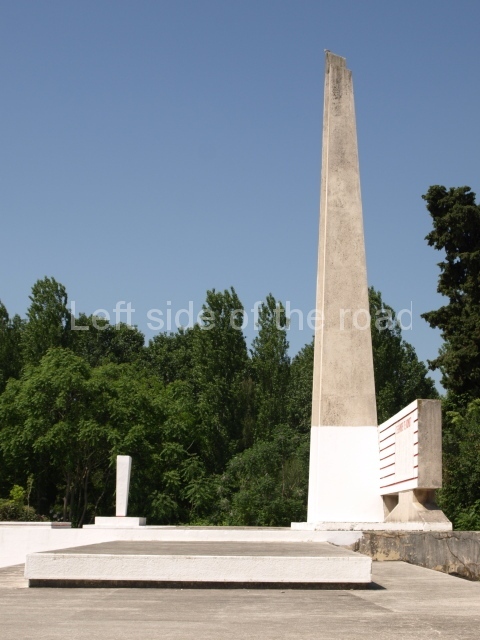 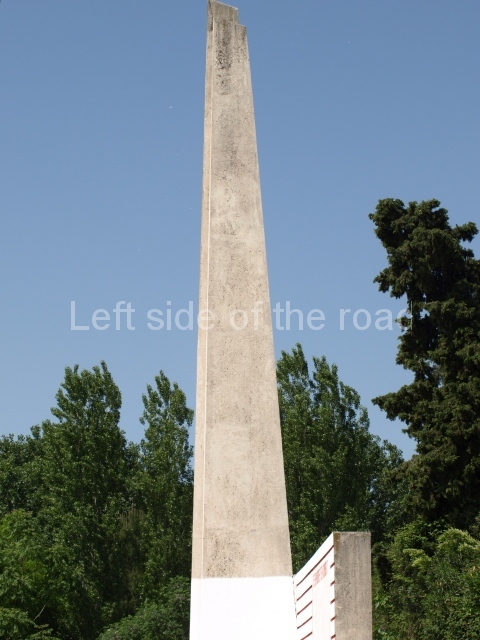 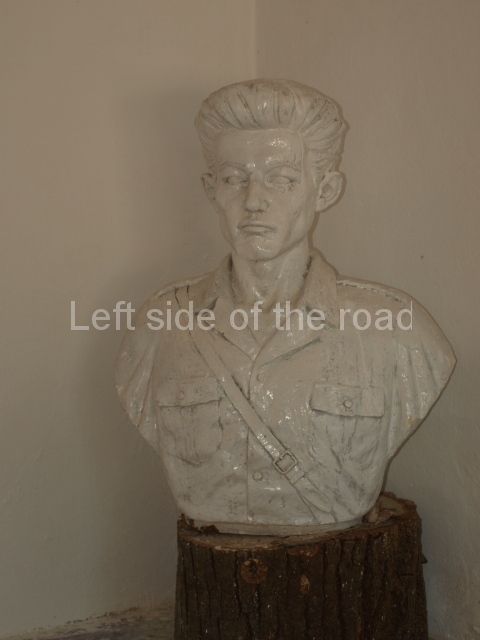 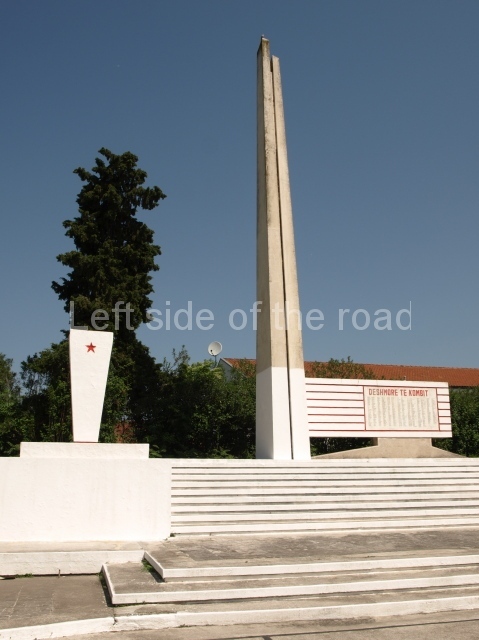 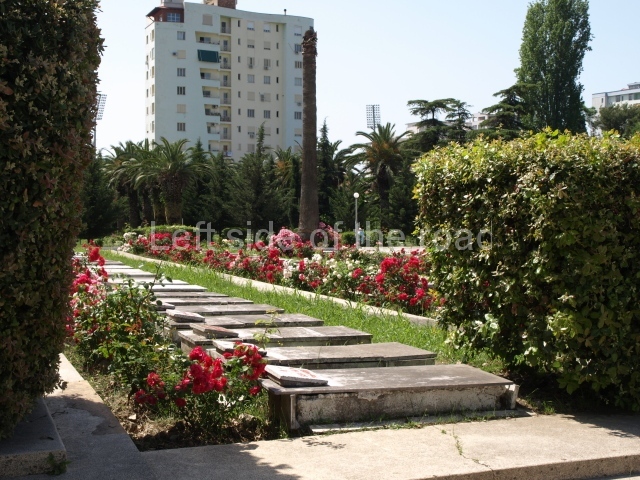 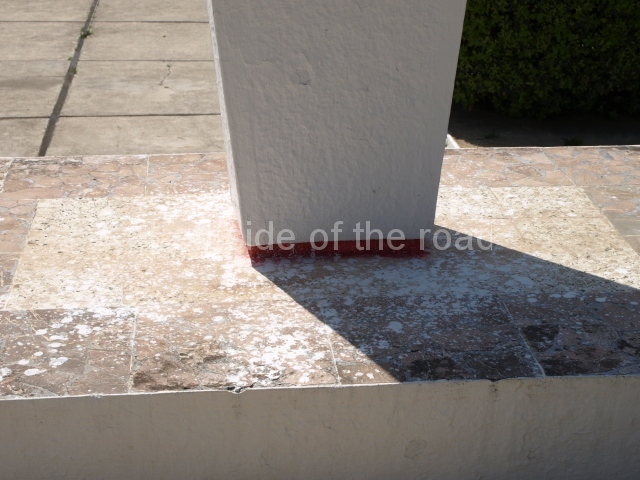 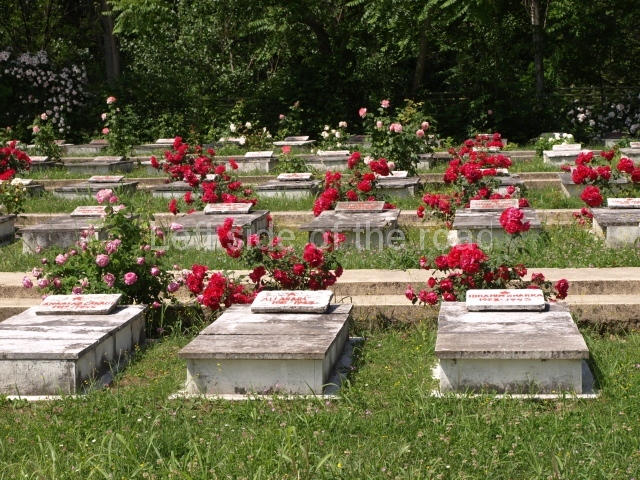 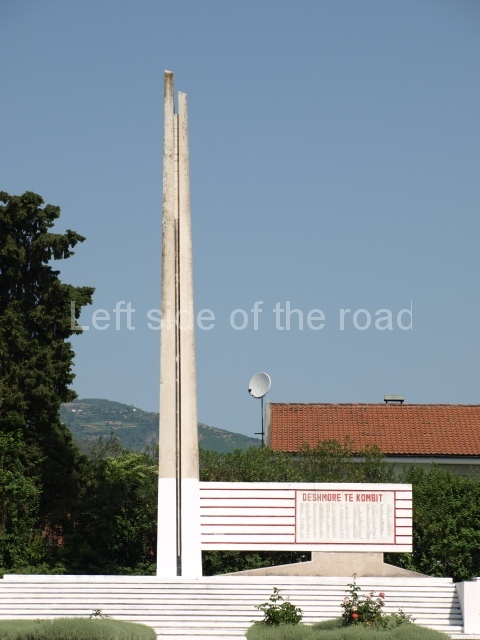