This lapidar consists of a bronze statue, half body, starting just below the waist, around about twice life size. The statue stands on a plinth, which is about one and half metres high. This plinth and statue are part of a general structure, the background of which is a huge, stylised flag – the dimensions of the backdrop are (very roughly) 4 metres high, 3 metres wide and ¾ metre deep. All the stonework will have a base of concrete and is faced with slabs of white-ish marble.

The statue is of a young man, who, by his posture, is moving towards his right, his head facing in that direction and with a determined look on his face. In his right hand he is holding a pistol. This could well be a Berretta M1915 (which was used by Vasil Laçi in 1941). His left arm is stretched out behind him, all the fingers on his hand spread wide, a stance to provide better balance for his intended action (which is an ambush on foot).

The gun in his right hand is not facing the target but is as if he has just pulled the gun from out of his clothing and it’s in the process of swinging around so that it will eventually make a straight line from the tip of the barrel, through both his arms to the tips of the fingers of his left hand.

There’s also the impression of movement from the fact that the scarf that he has around his neck is loose and it is flowing over his left shoulder. The left side of his jacket, which is unbuttoned, is also flowing out behind him providing the impression he’s rushing towards his right and the clothes are slightly lagging behind his body’s movement.

This is a statue of a young man with relatively short hair and of someone who’s living in the city as there are no elements of traditional Albanian dress in his clothing.

On ‘flag’, above its head and to the statue’s right, is a plaque which has the words;

With gratitude to the guerrilla unit of Korça, the young communists Midhi Kostani and Kiço Greço, who gave their lives for the freedom of the homeland.

Not the original inscription

However, this does not look like the original inscription. Just above the marble plaque there are a number of holes as if this is where individual, metal letters would have been attached to the wall. This was the more usual method of attaching an inscription. So far there’s no way of knowing (destroyed records during the counter-revolution of the 1990s) what the original description might been.

This takes on a specific importance here as information from other sources indicates that this statue was created by Kristaq Rama, and that it is supposed to be that of Vasil Laçi, who attempted to assassinate Victor Emmanuel III, in Tirana, in 1941. No confirmed date for its creation but probably mid-1970s.

However, Vasil’s name is not one of the two that are inscribed on the plaque.

He did have a connection with Korçe – his brother lived there – which is possibly one of the reasons why he may have been placed in the city. There’s no other reason why he should be where he is because he came from area around Sarande, in the south of Albania, and he spent some time before the assassination attempt in Tirana.

(If this is, indeed, a statue of Vasil Laçi then it’s not a surprise that he has been ‘written out of history’. Albanian authorities, in some – but by no means all – towns and cities in Albania have been attempting to obliterate the Socialist past and a statue commemorating an assault on the life of the puppet monarch from Fascist Italy might not fit in with the brown nosing that takes place in Albania towards the capitalist European Union.)

This statue is in very condition, as is the stonework which is part of the lapidar and there is no obvious damage in the marble facing – which is a pleasant surprise.

In the main, pedestrianised street, Bulevardi Shen Gjergji, of Korca, next to the main city library. 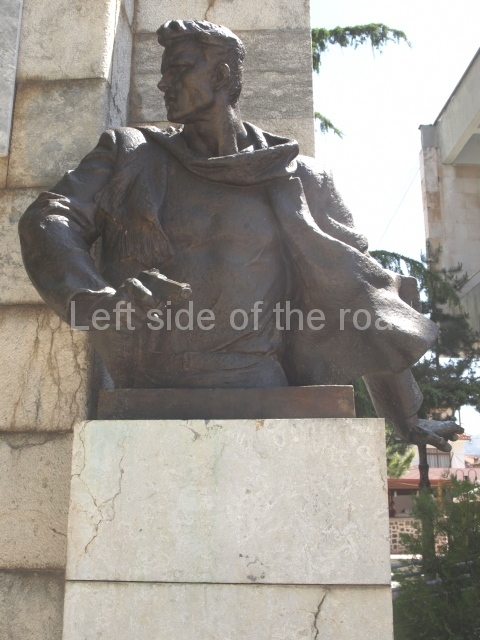 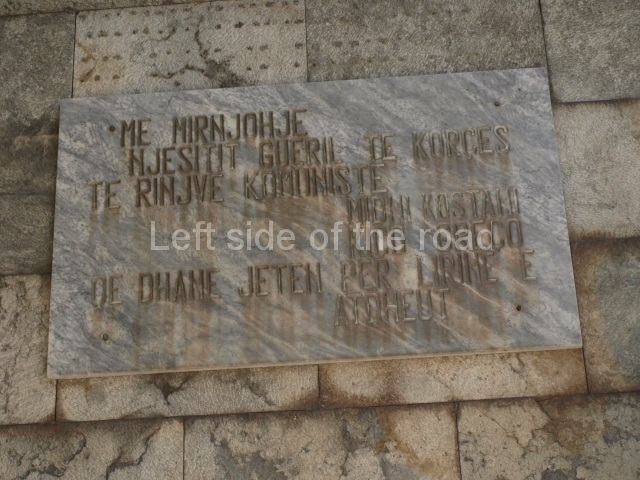 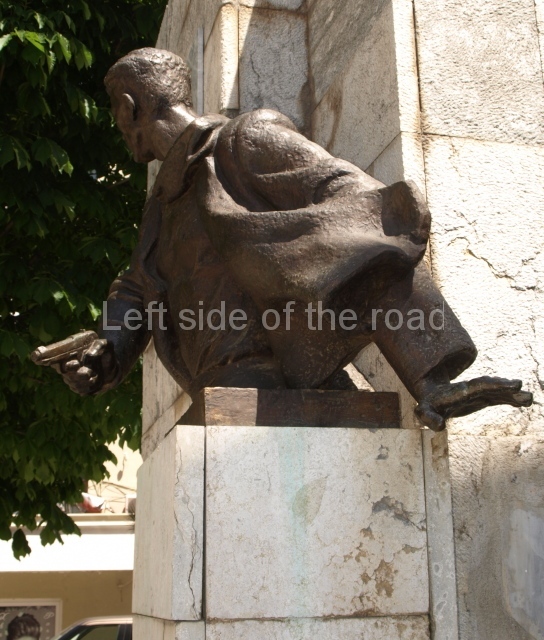 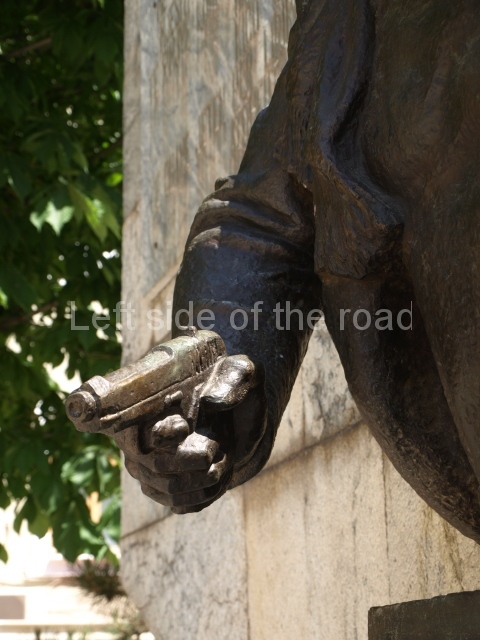 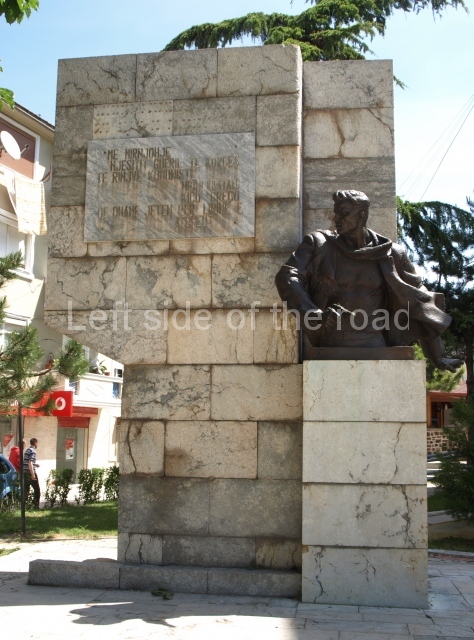 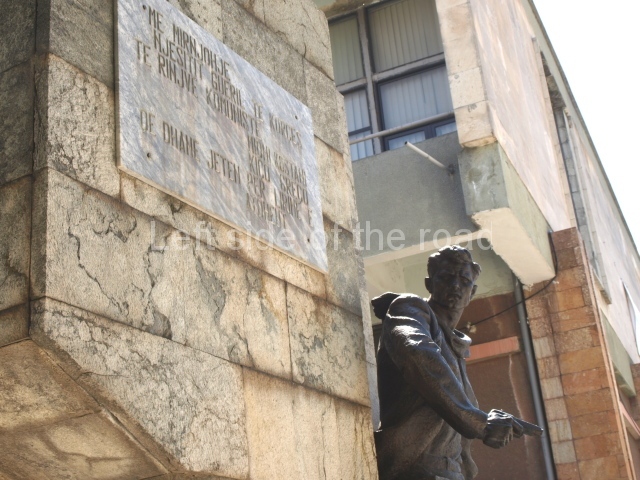 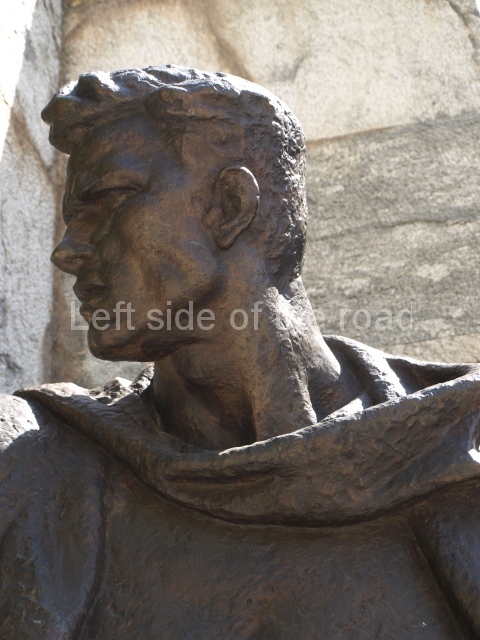 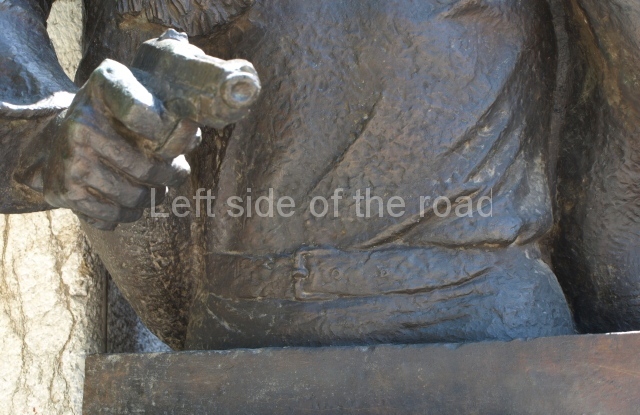 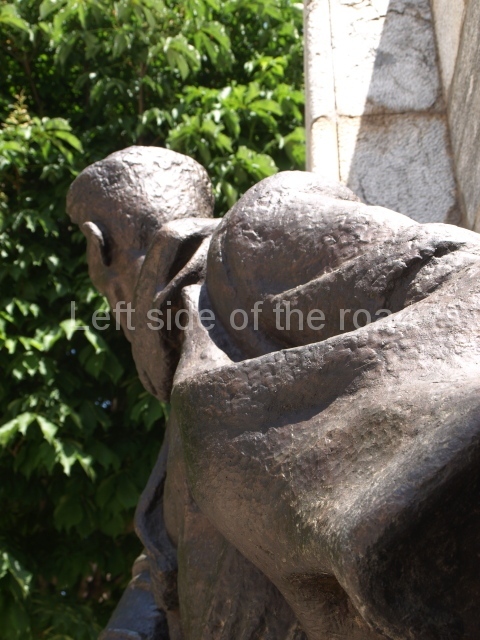 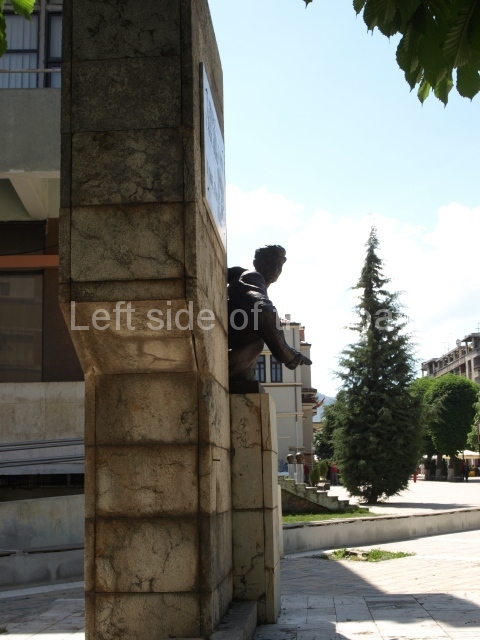 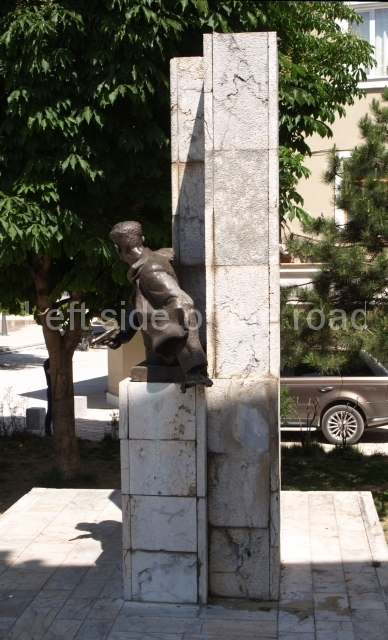