This small relief, at the bottom of the stairs into a high school in the old part of Gjirokastra, commemorates an event in 1942 when the local students from the gymnasium (college), together with their teachers, demonstrated against, and clashed with, the occupying Italian fascist forces.

This is quite likely to be missed by those who are passing on their way to the Ethnographic Museum (which also happens to be the birth place of the leader of the Partisan Army during the war against fascism and for National Liberation and leader of the Party and the country, Enver Hoxha).

There are a number of documented cases where the local, unarmed, population took to the streets and showed their opposition to the fascist invaders. This is even more remarkable when you consider that there was already a guerrilla war being waged throughout the country and this would pass into another, and higher stage, in September of the same year after the Peze Conference, in a small village just to the south-west of Tirana when the National Liberation War was initiated, under the leadership of the Albanian Communist Party, later the Party of Labour of Albania (PLA).

The organisation of the Communist youth was well established in Gjirokastra by this time, a prominent role being played by Bule Naipi (who was later to be murdered by the Nazis, along with her comrade Persefoni Kokëdhima, in July 1944) and the occupying forces found it difficult to deal with this type of open opposition.

This demonstrated a lot of courage on the part of the Albanian people as the action in Gjirokastra was repeated in many other places, such as Durres. A painting by Sali Xhixha (in the Durres Art Gallery) depicts a demonstration against the Italians in Albania’s most important port and the main bridgehead for their invasion in 1939.

The bas-relief depicts five young people, in the main young and all but one looking in the same direction, that is, towards the left of the viewer. We see little more of the individuals than a head and shoulders.

The young man in the front has a stern expression on his face and has his right arm high in the air and his fist clenched, seeming to indicate he is about to throw a rock at the invaders.

Behind him is a young woman. Her long hair is braided and hangs down over her left shoulder. Her mouth is shown open shouting her defiance.

Next is an older looking male, probably representing the teacher, not least as he is wearing a neck tie. (This is not recommended in demonstration situations as this can easily be grabbed and the wearer is then incredibly vulnerable and can be quickly made ineffective due to the threat of strangulation. It’s also not recommended to have long hair plaited as this offers the military or police forces another way to incapacitate a demonstrator.) He has a stern look on his face but apart from that it’s difficult to read his expression. He is looking in the general direction of the action but we are able to get a view of his face full on.

The next of the quintet is another young man, a student. He is looking away from the main action and we can also see his complete face, rather than the profile of some of the others. He is also shouting, his mouth wide open and has his left arm high above his head – the vegetation on my visit obscuring what, if anything, he has in his hand.

This idea of one of the characters looking in the opposite direction to the main action is a common device in Albanian Socialist Realist sculpture (see the Monument to Heroic Peze and the Peze War Memorial for other examples) as it indicates that there are many other people involved than those we see. These individuals play the role of encouraging those unseen to keep up with the action, whether it be the battle of arms in the mountains or a confrontation with the fascists in the streets of their home towns.

The juxtaposition of this student and the teacher, and way they are looking, also act as a challenge to the viewer. They are asking, sometime mutely, ‘What are you going to do?’

Finally we have another young woman (always a more or less 50/50 representation of male/female protagonists in Albanian Socialist Realist art). She also has longish hair, but this time not tied back in any way. There’s a determined look on her profile as she heads towards the point of conflict.

As a backdrop to these five demonstrators we have the Albanian flag. We get an impression of the folds of the banner in the way the bronze has been moulded. It’s the Albanian flag as we can see the heads of the double-headed eagle on either side of the arm of the first angry student. Unlike on other monuments there’s no obvious sign of a star (the Communist symbol) but this is normally directly over the place where the two eagle heads meet and any such star would be obscured by the upraised arm.

This could have been a deliberate move by the sculptor (so far unknown to me). We know from other circumstances (the Mosaic of the National Museum and the Durres War Memorial, for example) that not all the artists involved in such work prior to 1990 were steadfast in their politics and later could be easily bought.

At the far right hand side of the monument are the words which explain what it commemorates:

On March 6, 1942, the gymnasium (high school) students and teachers clashed with the forces of fascism (Italian).

The relief had suffered from a certain amount of mindless, yet not too destructive vandalism on my first visit. However, by May 2015 it had been cleaned up and the vegetation cut back so it was much easier to appreciate the story being told. (This element of ‘renovation’ is taking place throughout much of the country, sometimes sympathetic to the original, other times not so much. Nonetheless destructive vandalism seems to have retreated in the last couple of years.)

Being at the bottom of the stairs to the present college building I wonder if any of the students think on this monument and what it represents as they go to school each day – unfortunately, I doubt it.

If you visit this bas-relief it is also worthwhile going up the steps to take a look at another lapidar just to the right of the main entrance to the building. 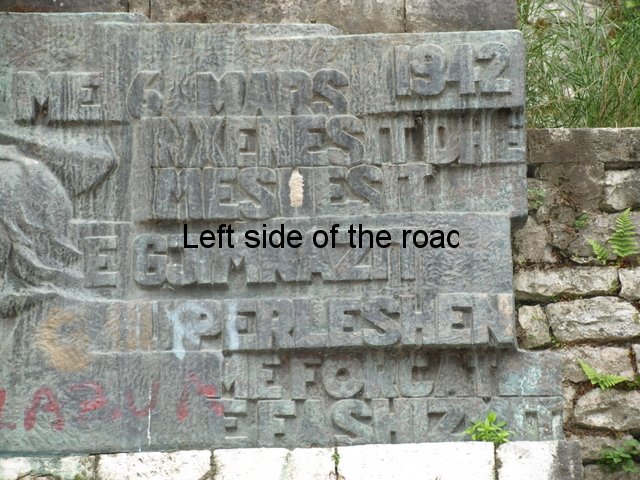 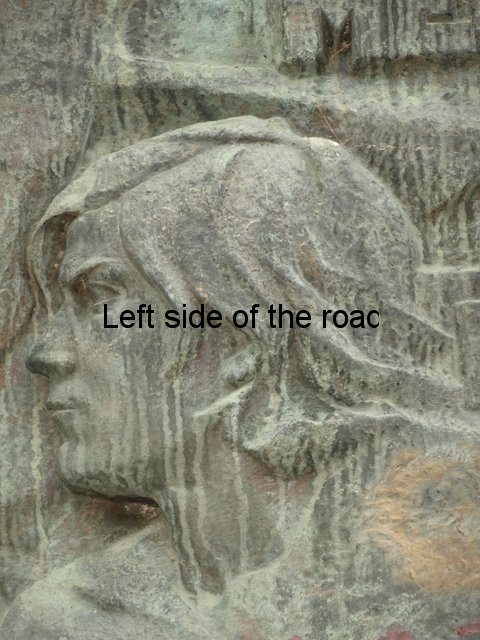 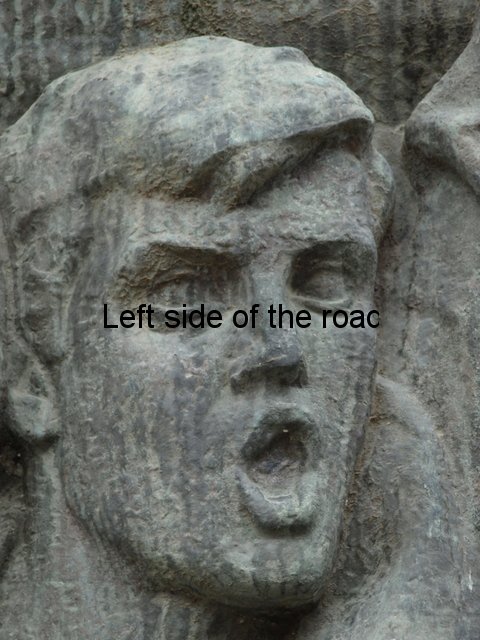 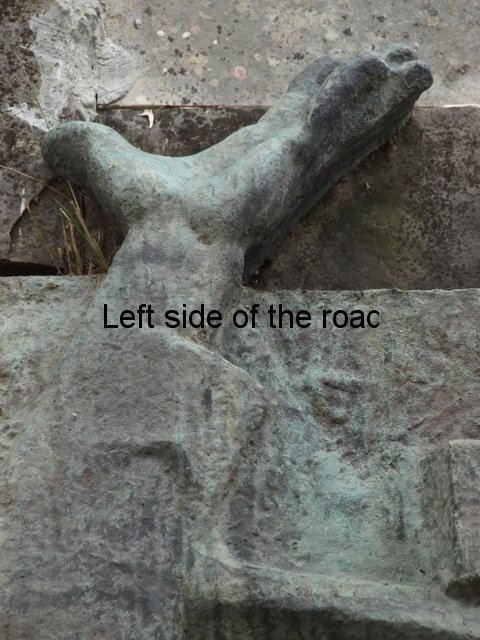 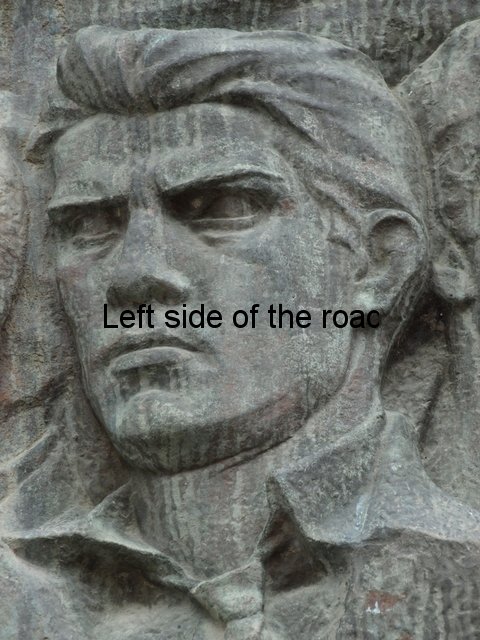 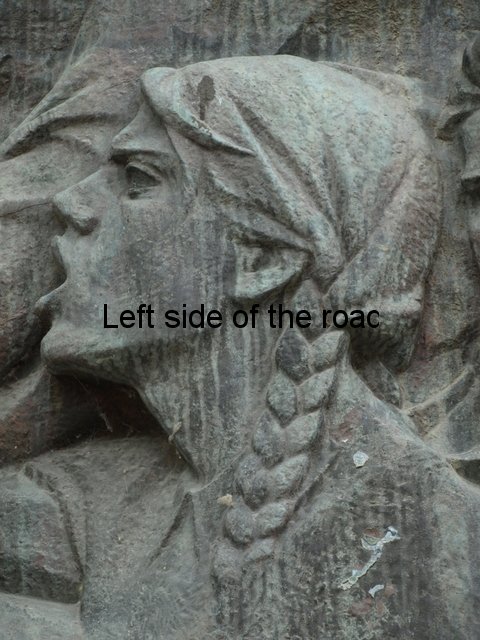 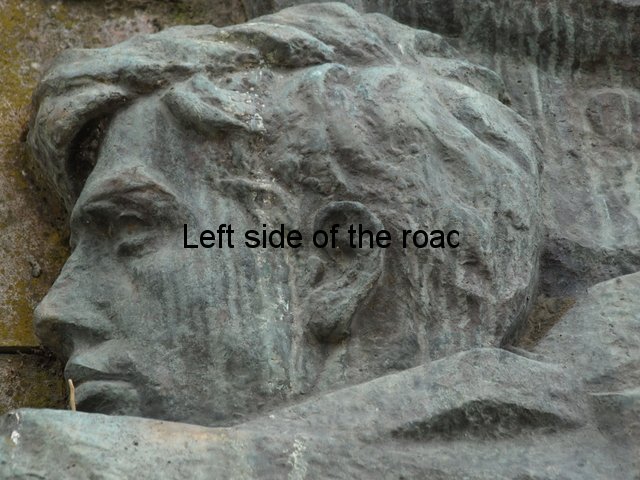 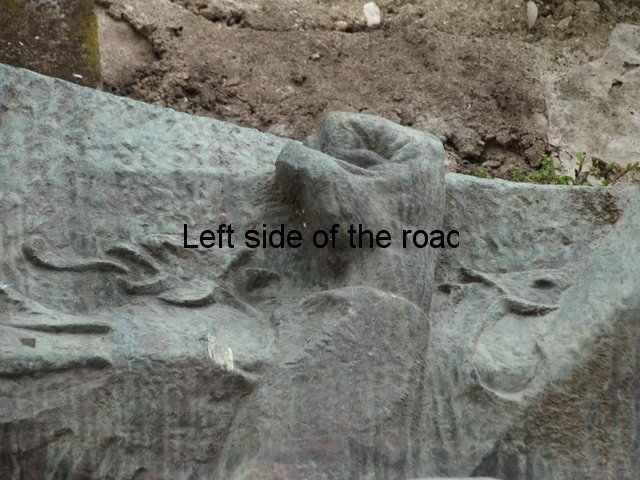 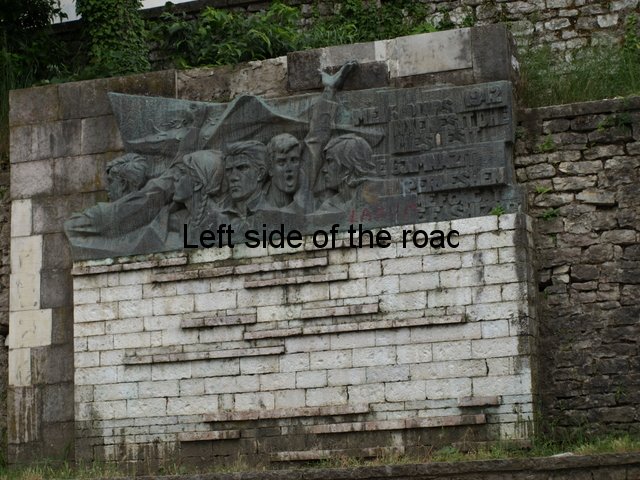 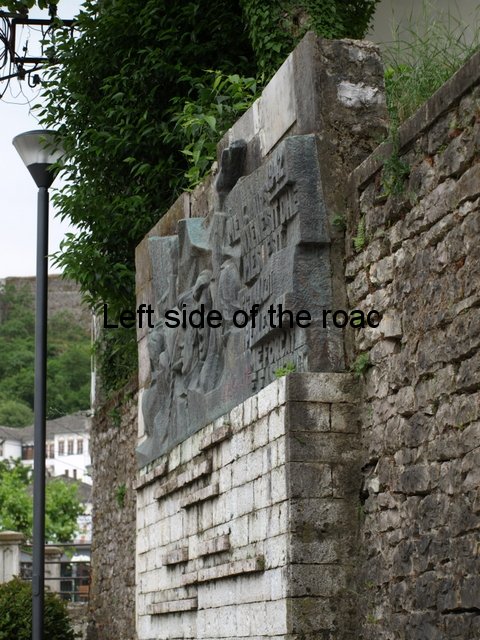 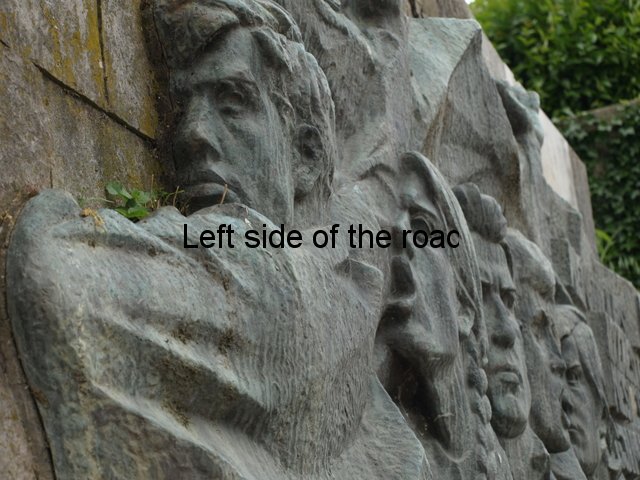 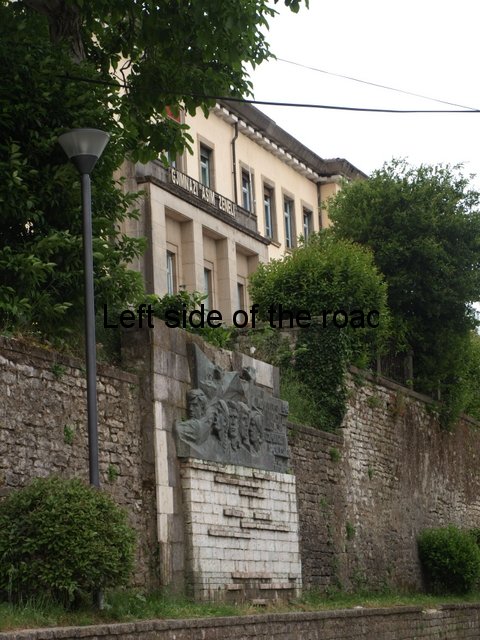