The Peze Conference on 16th September 1942 was important in establishing the organisational structure for the forthcoming struggle for liberation against the Fascist invaders, first the Italian and then, when Italy fell to the Allies, the Germans. This important meeting took place in the home of Myslym Peza who had a large house and land on the edge of the small village of Peze, about 20 kilometres south-west from Tirana and this is now the location of the Peze Memorial Park.

When the Italian Fascists invaded on 7th April 1939 there was no resistance from the self-proclaimed ‘King’ Zog 1 who ran away with his family to Britain where, as they said at the time, ‘he had a good war’ – far from the death and destruction that was being inflicted on the country of his birth.

Different nationalist groups, but especially those organised by the Communist Party of Albania (CPA) after its foundation on 8th November 1941, fought against the invaders but by the middle of 1942 it was recognised that the struggle for liberation needed co-ordination and with that in mind the Communists invited all nationalists to a conference to create a structure that would defeat the materially superior foreign forces.

The home of Myslym Peza was chosen as though relatively close to the capital Tirana the struggle in that part of the country meant that it was a no-go area for Fascists and the meeting could be held in relative security. From this conference came the formation of the National Liberation Front. Probably the most important decision was, as it says in the History of the Party of Labour of Albania, that:

‘National Liberation councils should be set up everywhere as organs uniting and mobilising the people in the war, and as organs of the people’s power. Thus paving the way for the construction of socialism after victory over the invaders.’

After the war this area became a memorial park to those who had made the ultimate sacrifice in the struggle against fascism and as well as the house, part of which became a museum of the partisan struggle, the grounds also became the location for three separate memorials.

The first was the memorial to the conference itself which is close to the villa buildings (the Peza family were obviously wealthy but Myslym adopted the Communist cause and became a commandant in the National Liberation Front).

This monument (inaugurated in 1970) is constructed of breeze block and faced with marble and is in the form of a stylised rifle standing butt end on the ground. This is surmounted, as on virtually all monuments celebrating and commemorating the War of National Liberation, a large star. This was the symbol of the CPA and appears on many monuments produced in the socialist era. The victory against the fascists was overwhelmingly due to the efforts of the Communists (although other nationalist hangers-on, supporters of Zogu and even the British Special Operations Executive (SOE) all wanted to claim the credit).

On the left of the central tower, on the wall that forms the other element of the sculpture, is the date, in stylised numbers, 16 9 1942.

‘The Peze conference laid the foundations for national unity in the fight against the invaders’.

To the left of the monument, and a few metres in front of it, is a bowl that once would have hosted an eternal flame. Unfortunately, as the fight of the Albanian people has gone out so this flame of resistance has also been extinguished.

I’ve seen monuments in a worse condition so there must have been a determination in the village of Peze at the time of the chaos following the counter-revolution of 1991 to protect the structures in the park. None of the major sculptures show signs of vandalism but the monument to the conference is suffering from neglect and some of the marble slabs have fallen off exposing the breeze blocks beneath.

(As I’ve travelled around the country I’ve been surprised at the ready to hand materials that have been used in the construction of the memorials and statues. Simple and cheap materials were imaginatively used to produce interesting works of art – few were made at huge cost such as the monstrosities that litter British cities in homage to the monarchy and other exploiters of the people.)

The other two main monuments in the park are the Memorial to the 22nd Brigade and the Peze War Memorial.

To the right of the stairs to the first floor of the villa, facing the roadway, is a plaque which commemorates the conference. The translation reads: In this house, on the 16th September 1942, was convened the Peze Conference for national unity in the fight against the invaders.

Up these stairs there used to be a small museum related to the liberation war and the part the local men and women played in its victorious culmination. That has suffered from neglect (and no doubt some looting of anything that might have had any value) and the two rooms only have a few paintings and some photo cards on display. The rooms are really used as a storeroom to the expensive looking restaurant that occupies the ground floor space. The ‘museum’ is not normally open to the public but if the caretaker sees the opportunity of a 500 lek note he will open up (but perhaps only when there are few people around).

The ground floor is decorated and furnished as a wealthy land owners house would have been before the Second World War with an interesting portrait on the wall in the room off to the left of the entrance hall of Myslym Peza – if you get that far note the red star on his right lapel with the flag of Albania beneath it.

Like so much public property this villa has been privatised and although I didn’t see the menu this restaurant looked expensive, if not just because of the location and environment.

Once the Italian Fascists got news of the Conference they came and took their revenge on the building and it was destroyed. It was then rebuilt in its original form after liberation.

The, now, seemingly abandoned building just down from the main villa also has a plaque. This states that it was from this building that the partisans operated, from 1940, in the Liberation War. You can’t miss it as it’s the building with a rusting anti-aircraft gun and a small howitzer outside. They are from the war period, the car, I assume, although equally abandoned, is of a more recent vintage.

Despite the fact that the park has some of the best preserved socialist memorials in any one place I’ve seen so far that doesn’t mean it’s not suffered the ravages of the post socialist period. Just up hill from the villa is the remains of a large fountain. This has not entertained visitors with its cooling display for a long time.

Further down hill, closer to the entrance gate and to the right of the road as you come into the park is what looks like another, smaller – perhaps drinking – fountain. It seems there was some structure on both sides of the stone pillar as there are brackets fixed into the ground which must have supported something. As of yet I don’t know what.

For bunker hunters there are quite a few scattered around this small park, especially close to the park entrance. And, unfortunately, the whole area is covered with litter, a fate from which all Albanian parks suffer. The number of bars and restaurants in the village are too great for such a small population so it seems that this is a popular day trip for people from Tirana in the summer months, They have, regrettably, the habit of not taking their litter home but even worse, letting it sit where it lay which then gets subject to the wind.

In the fight back, that is there even if at a relatively low-level, someone has painted a large red star on a fuel tank close to the gate.

How to get to the park:

This is simplicity itself. From the main road that comes from the direction of Tirana take the side road opposite the Post Office, heading downhill. Within a few steps you’ll see the gates the other side of a bridge over the river. This is the entrance to the park and once through the gates you’ll see the main monument just up the hill.

Getting to Peze by public transport: 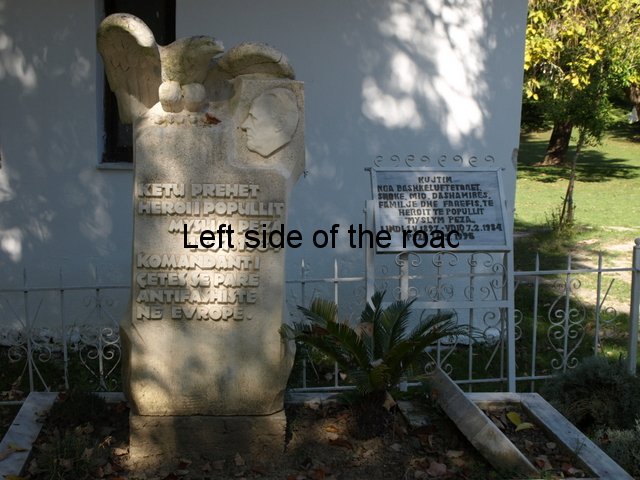 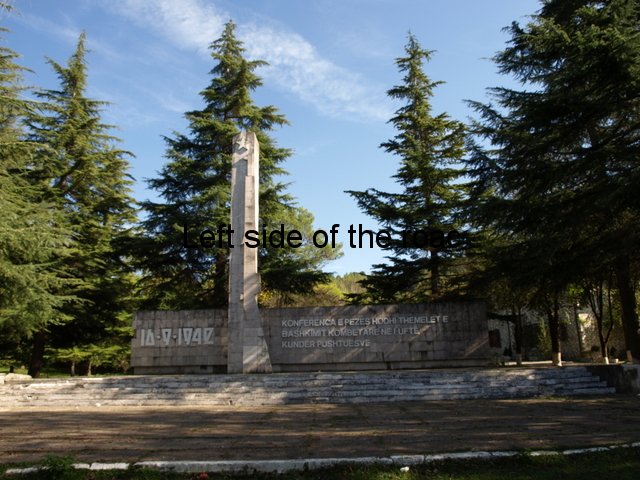 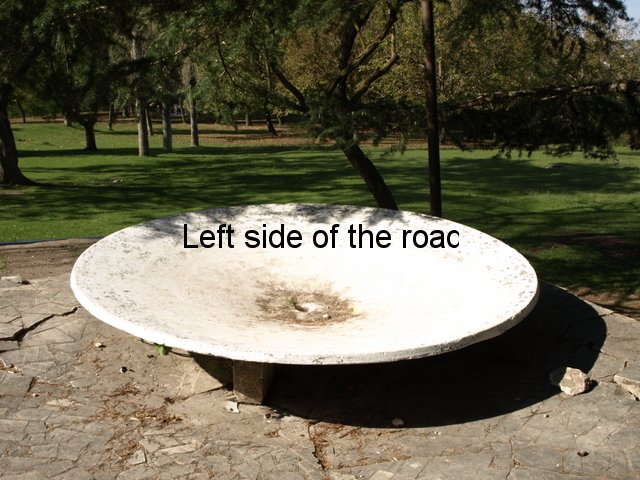 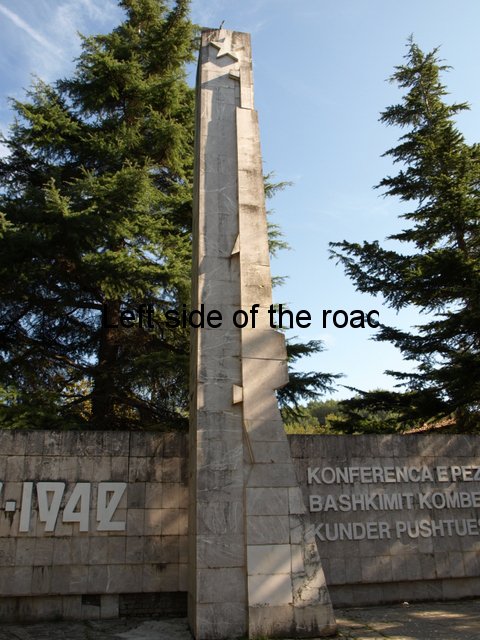 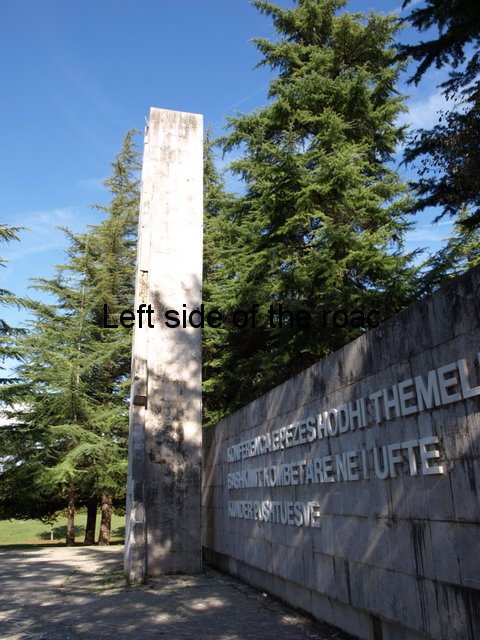 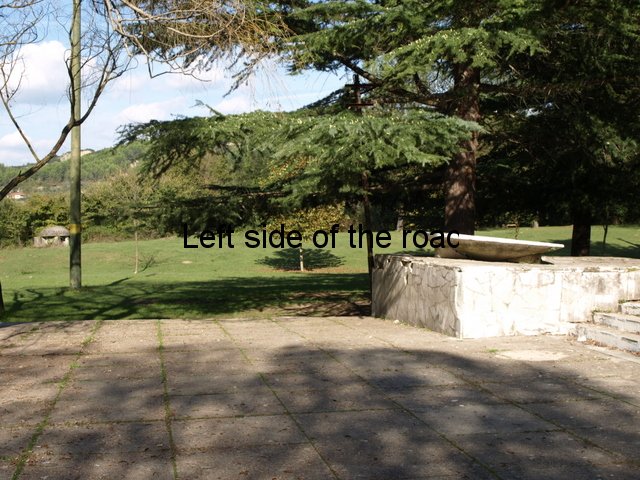 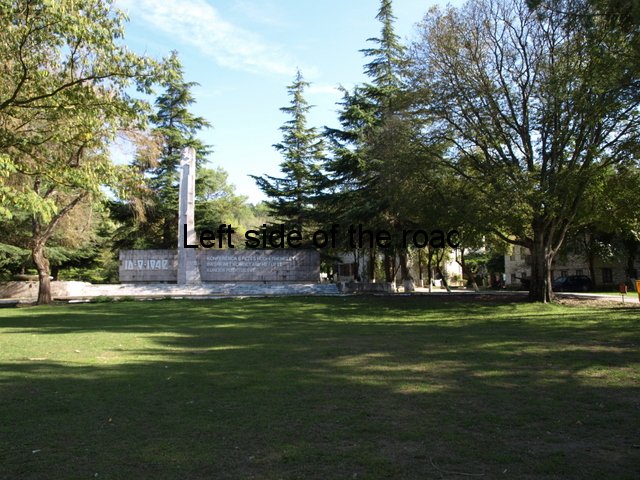 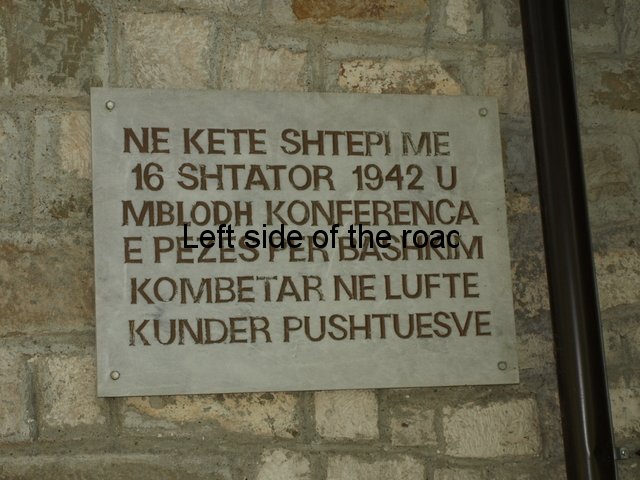 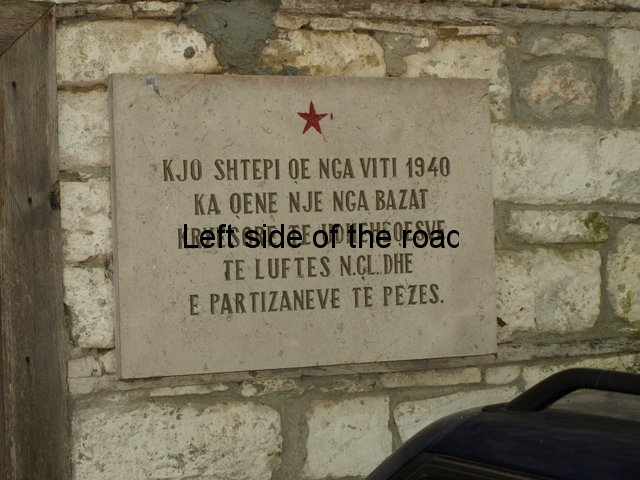 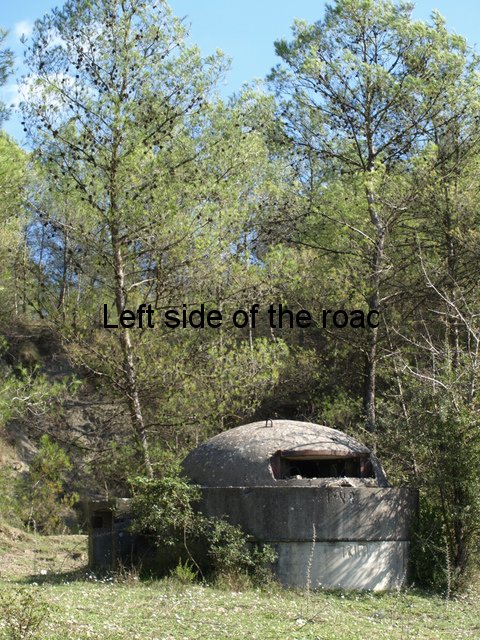 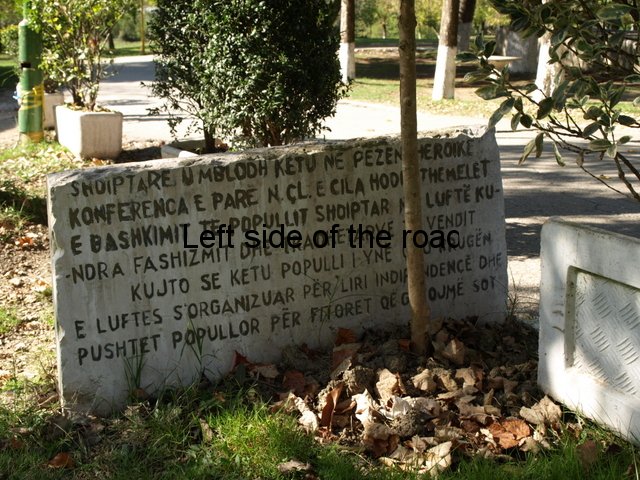 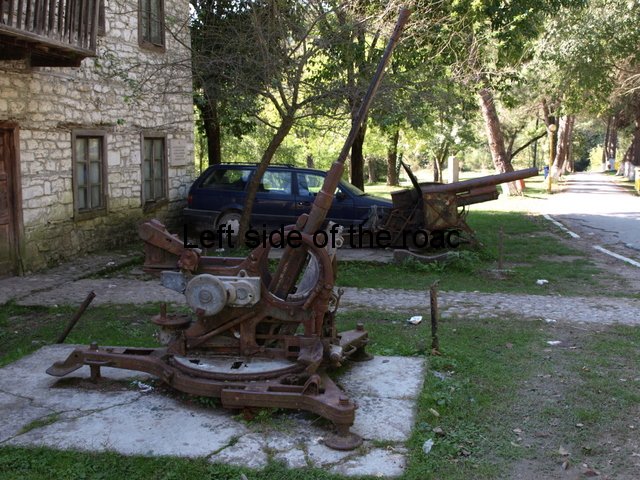 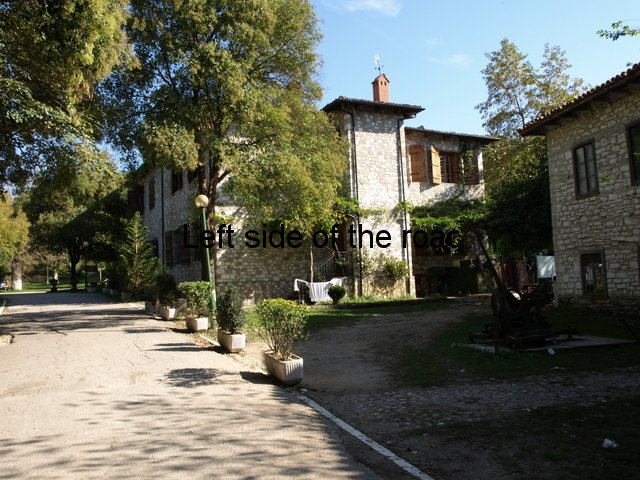 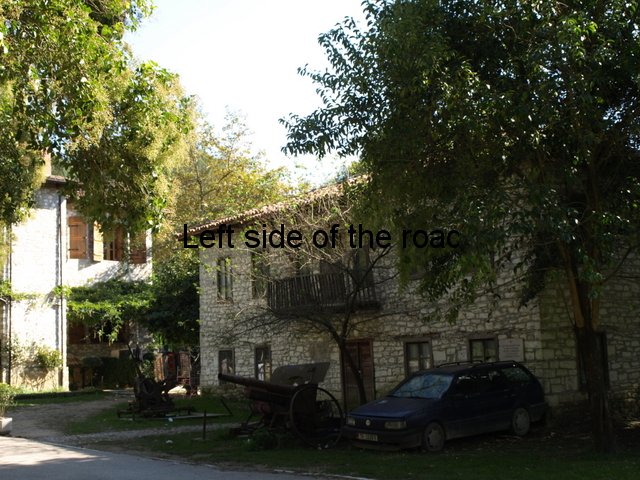 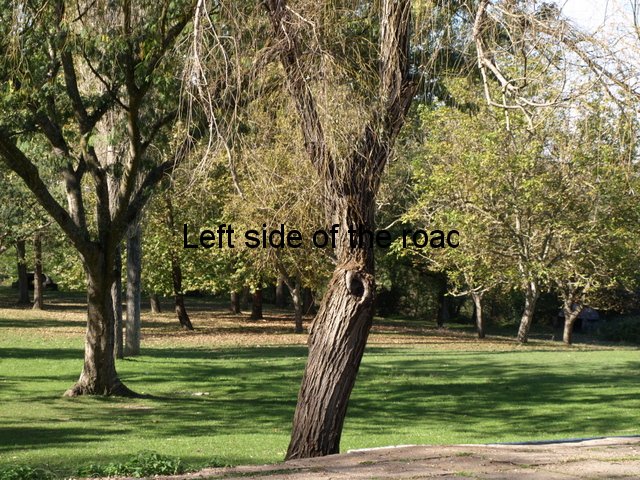 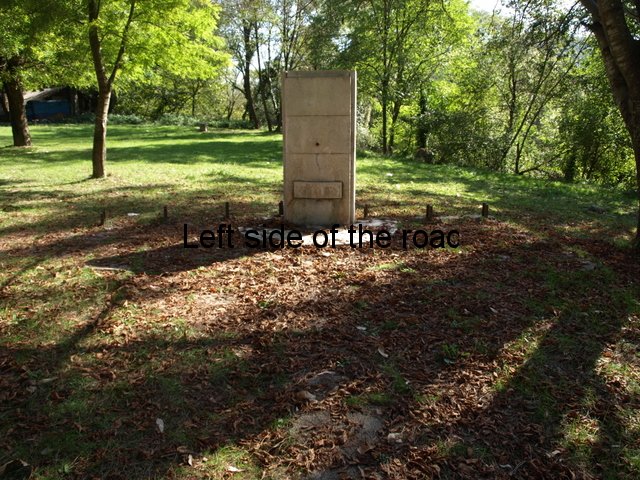 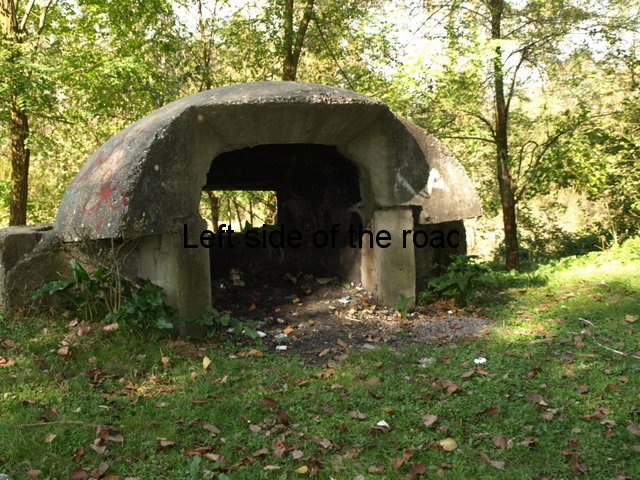 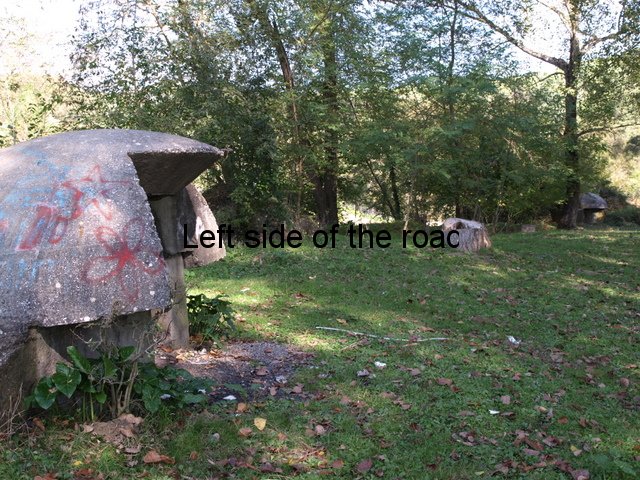 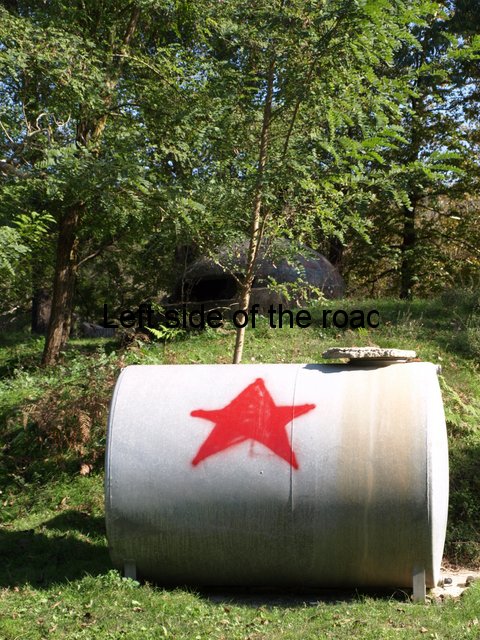 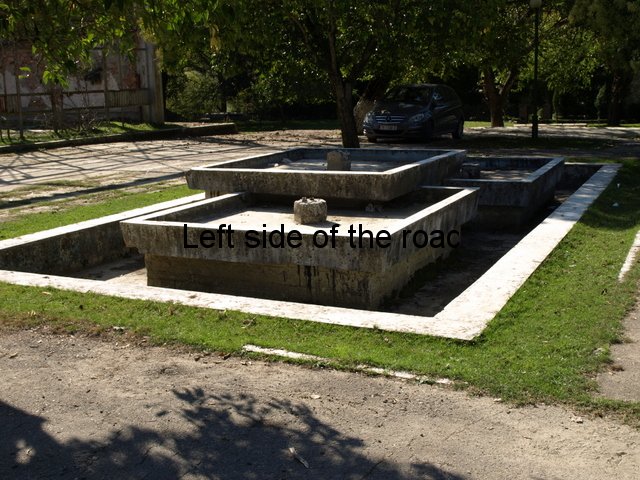