Although the plan is to attempt to record all the monuments from the socialist period in Albania’s history there are, and will be, occasions when I will have arrived too late. Either the ‘democrats’ (a mixture of monarchists and neo-fascists) have got there first and destroyed the works of Socialist Realist art as it represents all that they despise and fear – such as any of the statues of Enver Hoxha – or those lumpen elements who see only scrap value in a piece of metal – that has led to the damage to the statue of the Five Heroes of Vig in the northern city of Shkodër. Destruction and vandalism has been the fate of the Monument to the Artillery in the hills to the south of Tirana, close to the town of Sauk.

Even during the time of socialism in Albania this area was probably not that accessible. Now abandoned, two military barracks and a network of tunnels had been constructed on the ridge that looks down on the artificial lake and the forested area that is Tirana Park.

During the National Liberation War this would have been even more inaccessible, with no drivable roads from the valley to the ridge. However, this inaccessibility didn’t prevent a unit of the 3rd Shock Brigade of the Partisan army from transporting a short-barrelled mountain gun to the top in order to disrupt the plans of the German Nazis from establishing some element of legitimacy to their occupation of the country with the setting up of a ‘Quisling’ government.

The date chosen for this sham was the 18th October 1943 and on that day the Albanian traitors met in the Victor Emmanuel III Palace on the outskirts of the city of Tirana. This building seems to be a magnet for fascists, traitors and despots as this is where the remains of Ahmet Muhtar Bej Zogu (the self-proclaimed ‘King’ Zog) were interred when they were brought back to Albania in 2012.

Firing across the valley the small piece of artillery hit its target and caused the suspension of the meeting. For this reason, following the independence of the country with the defeat of the Nazis and the liberation of the country from all foreign forces at the end of November 1944, the 18th October was declared the Day of the Artillery of the People’s Army.

And for that reason the Monument to the Artillery of the National Liberation Army was established in the hills above Sauk.

The monument involved the work, skill and imagination of three sculptors – Kristaq Rama, Muntas Dhrami, Shaban Hadëri (who also collaborated on a number of other sculptures, including Mother Albania at the National Martyrs’ Cemetery and the Monument to Independence in Vlora) – and the architect R Kote.

(It’s perhaps pertinent here to make a comment about the construction of monumental art in a socialist society. An aspect which makes Socialist Realism not only an art for a specific class of people but also a new way of producing public art is the collaborative manner in which artists are encouraged to work. This is a big issue and I don’t intend to go into any greater detail here but the individuality that most ‘intellectuals’ crave, demand and expect gets challenged in a socialist society. This might explain why some of those Albanian intellectuals and artists now hold the views they do. Examples of this would be the writer Ismail Kadare who no longer lives in his own country; Agim Nebiu, who was an active participant in the vandalism of the Albania Mosaic on the National Historical Museum, of which he was one of the designers; and Hektor Dule, who created the statue of Azim Hajdari, one of the leaders of the counter-revolution in 1990.)

The artillery monument was constructed of concrete with the relief being of bronze. Inauguration was in 1968.

The columns were typical of the style that was adopted throughout the country. This time two rectangular columns, of about 10 metres, are at right angles to each other with the shape of a star cut into a red background almost at the top of the tower. The base on which these columns sit was faced with white and red marble on to which the story of the attack on the Quisling assembly was written. In 2014 there were only small fragments of the marble in existence, most of it being smashed and some of it still littering the site.

(The area around the monument in happier times – published in issue No 5, 1971, of New Albania.)

A wall that held the bronze bas-relief has completely disappeared, as has the metal. Whether this was stolen out of pure theft or political vandalism I don’t, as yet, know for certain. This today is still an isolated site but 20 or 30 years ago would have been more so. That would have made either option relatively easy and unobserved.

The relief depicted six Partisan fighters, five men and one woman. The lead man has a pair of binoculars up to his face and would have been looking in the direction of the Victor Emmanuel III Palace. Behind him is a woman with a rifle on her back.

Next is the gun crew and their short barrelled mountain gun. There’s a commander pointing in the direction of fire and a gun aimer is down on his knees making the necessary adjustments to the angle of the barrel to determine the range and trajectory of the shell. Behind him a Partisan holds the shell that is soon to be dropping on the heads of the Fascist collaborators and traitors. The sixth man of the group holds the reigns of the horse that had contributed to dragging the gun into position in the first place.

In 1979 the artist Petro Kokusta created a depiction of this event in a painting entitled ‘Shelling the traitor’s assembly’ which is presently on display on the first floor of the National Art Gallery in Tirana.

Not only is the monument in ruins the whole of the area is a rubbish strewn mess. The paths are overgrown and the area emits an atmosphere of neglect and dereliction. That’s a shame as from this vantage point you can get one of the finest views of the city of Tirana, with the Datji Mountain range in the background. The day I visited was the worst day, visibility wise, of my visit in November 2014 and the picture is pretty muggy. Next time I will visit on a better day and, hopefully, be able to provide a more accurate photographic impression of the possibilities.

Because this range isn’t as inaccessible now as it used to be. From the top end of Sauk a newly surfaced tarmac road climbs towards the first ridge where the local cemetery is located. The road continues to a second higher ridge which is where the ruined monument can be found. (Looking up from the centre of Sauk you should be able to make out two man-made structures, the columns of the Artillery Monument and a sharply pointed obelisk which stood over a military barracks.)

This road is Rruga Xhrebahimi and, I assume, was built primarily to serve the old barracks. But now it is a very fine, well made and smooth surfaced road – but it basically goes nowhere and is indicative of the ‘development’ under ‘democracy’.

As I was going along this new road I couldn’t work out why no traffic was passing me in either direction until a single motorbike passed me. As I walked uphill towards the high pass I passed a group of six workmen who were making ‘improvements’ to the road which weren’t necessary. They were merely shovelling spadefuls of gravel on the edge of the tarmac and then using a light steamroller to keep it in place (until the next rainy day). A completely useless and wasteful task – apart from keeping them employed.

When I arrived at the pass I realised why there was no real traffic on such a well made road. At the top there was a section of from 100-150 metres where the road was just a rough and rutted dirt track. The road then continued down the other side of the hill, going for how long and to where I know not. Why this crucial section hadn’t been completed I can only speculate. Corruption? Inefficiency? Bad planning? Probably a mix of all of them.

There would be, however, some people who will benefit from this road. Being built very close to the road, in a location which meant that the patios would look down towards the Tirana Park Lake and the city were a small handful of very expensive looking houses. This road, no doubt paid for by public money, would make it very easy for them to get home. What the people of Sauk thought of this road I wasn’t able to discover. They must have wondered why such a road was being built to nowhere when the roads in the town are just falling apart.

There are buses leaving at regular intervals, destination Sauk, from the bus station that is located in the square to the south of the Opera/National Library building (not far from The Partisan statue). Get off at the terminus and head for the hills in the direction that the bus had been travelling before you alighted. Cost 30 lek.

It’s a bit of a hike and must be close to 3 kilometres in distance. Once you get to the pass and the temporary end of the road take the narrow path off to the right, on the Sauk side of the hill and follow this to the monument. If you take the wider path off to the left, going pass some tunnels you will arrive at an abandoned military barracks and the site of the pointed obelisk (with a now sad-looking red star at its apex). Chose a good, clear day and you will be rewarded with a fine view of the city and the mountains (as well as, possibly, a sight of the coast). 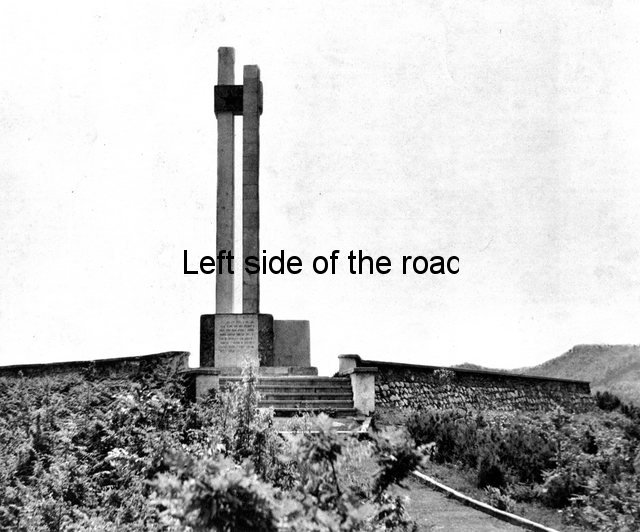 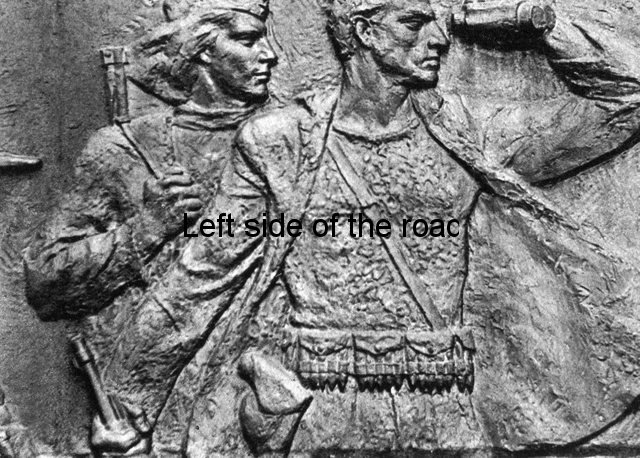 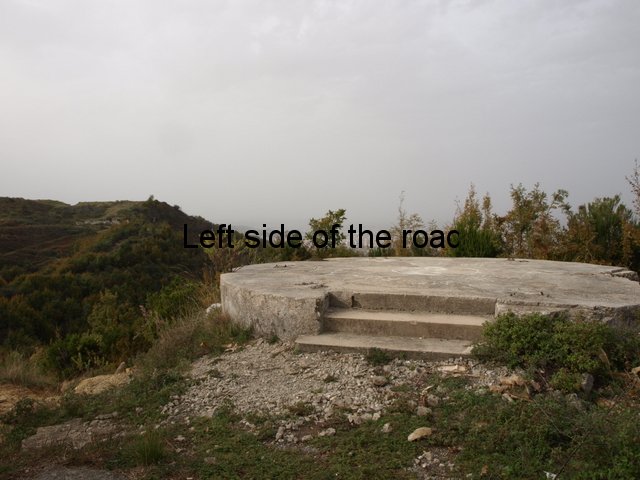 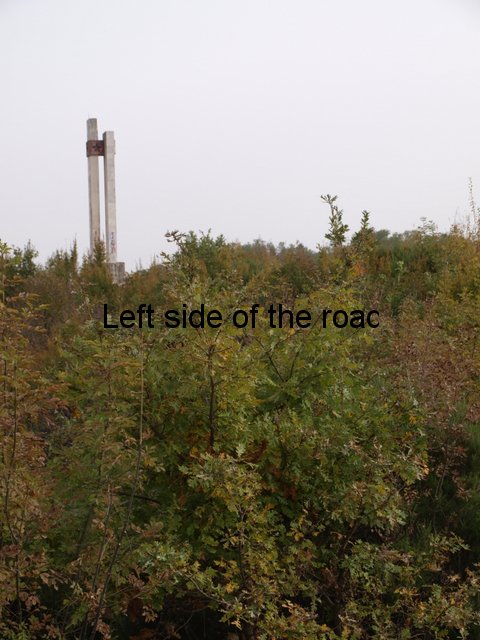 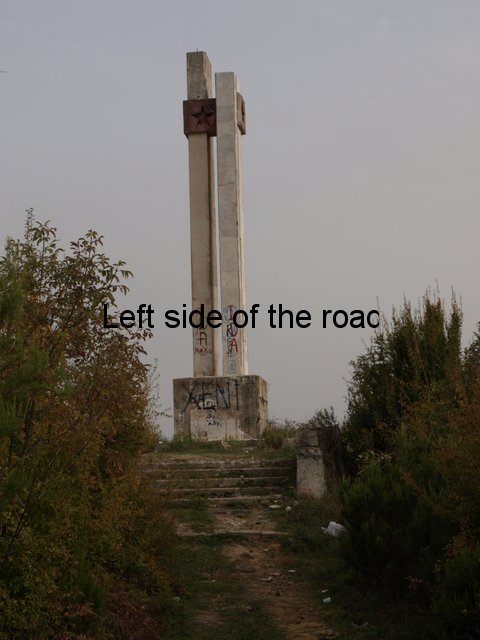 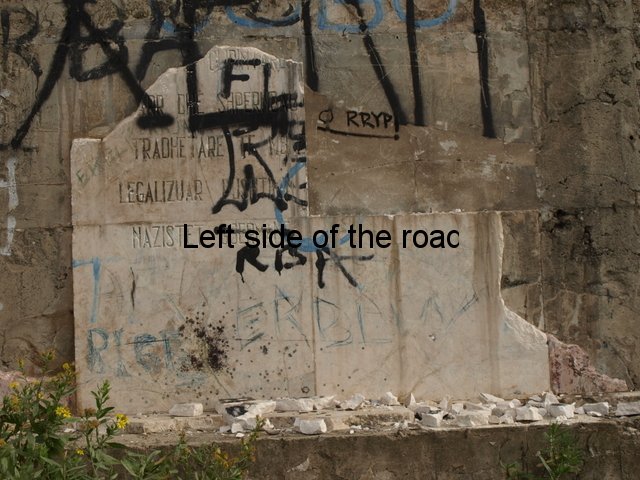 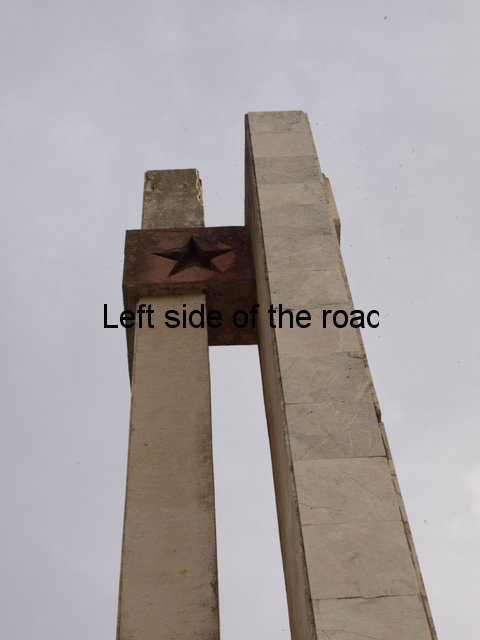 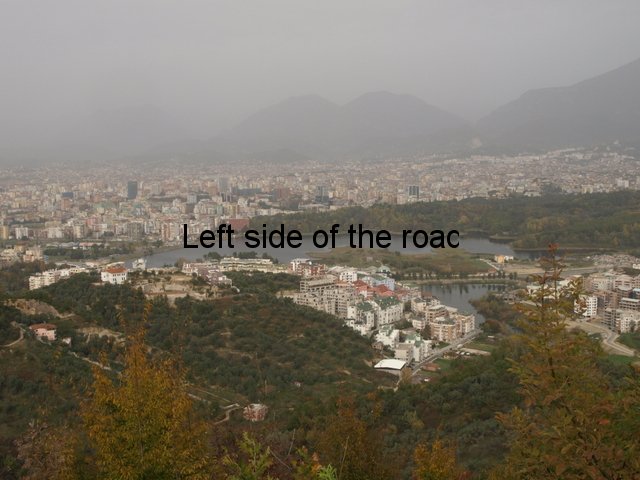 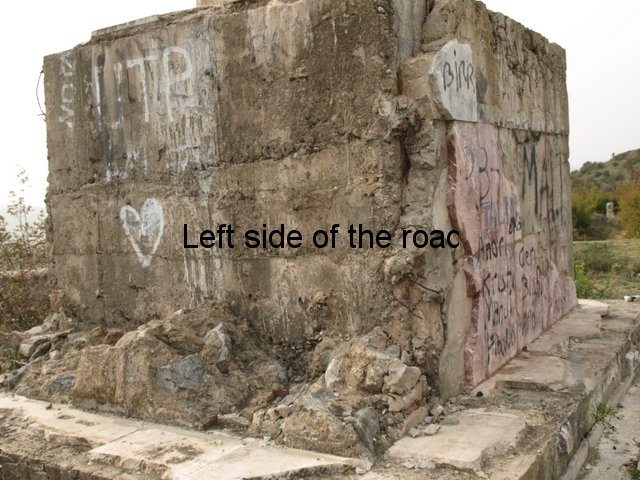 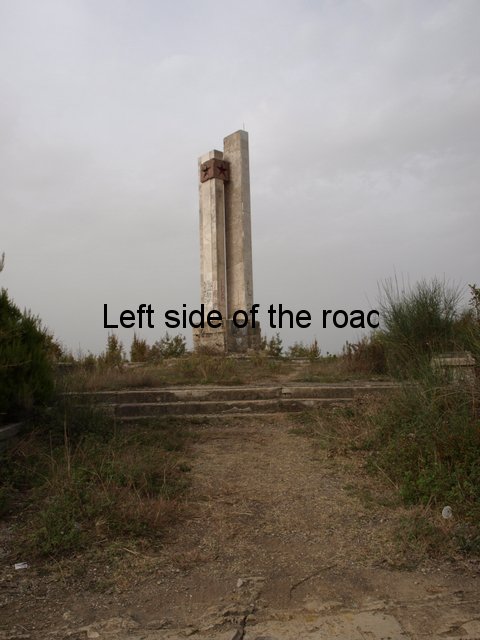 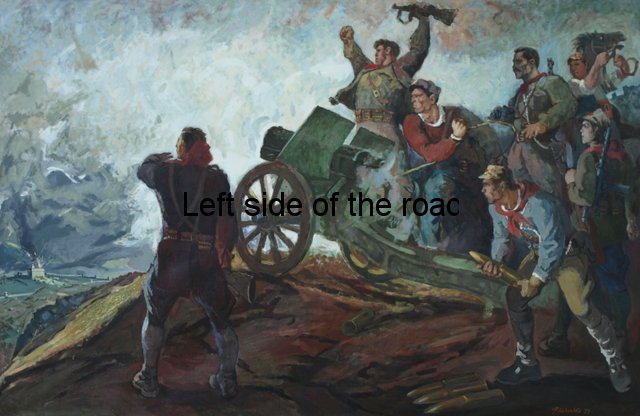