There are more than six hundred lapidars so far listed by the Albanian Lapidar Survey but they are not the only examples of Socialist Realist Art that tell the story of the country, especially after Independence in 1944. Although a considerable number of lapidars are in a sorry state, whether due to neglect or outright political vandalism, there seems to be a move, at present, to ‘preserve’ those which are still in existence. However, I’m not aware of a similar programme (whether nationally or locally organised) that pays attention to the many statues, mosaics and panels that celebrate the achievements of the people. The panel to the miners in the small village of Krrabë is one such example.

The area around Krrabë, during the Socialist period, was a centre of coal mining. When that changed I don’t know but on my visit there was absolutely no indication that mining had ever taken place nearby – except for the panel to the right of the entrance door to what looks like a community centre.

The panel is made from plaster and is about three by two metres in size, the figures depicted being roughly life-size. It’s not fixed to the wall as such but rests on two large iron supports. The image is of a small group of miners coming out of the mine at the end of the shift.

We can make out the curved entrance to the tunnel at the very top of the panel and the group of seven miners is closely bunched up. They are looking in different directions as if they were talking to their comrades as they leave work. At their feet there’s an intersection of three railway lines, used to take the coal from the mine. On each head can be seen a hard hat with a circular miners lamp attached at the front.

The features of the first three are the most distinct. The one on the left is facing forward and his left hand is bent over his chest, holding the end of what looks like an iron bar. His right arm is hanging down at his side. He’s wearing a jacket and trousers and has heavy boots on his feet. I assume that his dress indicates that he isn’t a coal face worker but has other tasks down the mine.

The miner on the right is dressed in a one piece overall and in his left hand he holds the handle of a round point shovel, close to the metal blade, which is at the height of his left knee. The handle angles up to the right of the panel, finishing just short of the edge. There’s a strap coming down from his left shoulder to his right hip, probably for some sort of satchel. He is looking over to his comrade on his right as if talking to him (so we only see his face in profile) and his right arm is outstretched as if he is making a point, or slapping him on the back.

The body of the miner in the middle is slightly obscured by the first two. He is also looking forward but doesn’t seem to be part of the discussion, perhaps a bit further back. He also seems to be wearing overalls.

The others in the tableau we only see partially.

To the left of the head of the first miner described is the head only, in profile of another male. To the right of his head, and slightly above, is the partial face of another miner. Only the nose and right eye is visible, underneath the hard hat. This one is different from all the rest as the face has the characteristics of a female, being more rounded than all the men’s images. My ignorance comes to the fore here as I’m not sure if women did work underground in the mines. There’s no real reason why they shouldn’t have done so as they were in all other occupations in the country but I haven’t seen anything, so far, to confirm this.

To the right of the individual in the centre of the panel we can make out a face and helmet but there’s more of an impression than a sculptured face. All the faces are very angular, this one being especially so. Finally we see nothing of the person but just under the roof of the tunnel is a partial depiction of a hard hat with the round miners lamp at the front.

The panel seems to be in a reasonable condition. The only damage I could make out was the broken nose of the miner who’s carrying the iron rod. There doesn’t seem to be any weather damage, it receives some protection from the eaves of the roof, and looks as if it had been relatively recently re/painted – most original monuments being the bare plaster or concrete.

In one sense these examples of art from the period of 1944 to 1991 are more at risk than some of the lapidars. This is mainly because they are attached to buildings and some of those can be in very attractive locations and risk being demolished and the decoration being lost forever – land and property speculation is as rife in Albania as in any other country. This was the fate of the bas-relief to the Tobacco Workers Strike in Durres. On the other hand such a monument with a very local connection might well be protected by those who live there. Time will tell.

Red Star with the Hammer and Sickle

As you come up hill into the village, passing the lower buildings, there’s an interesting reminder of the past on the wall of a one story building on the right. In a ridged roundel is a red star on a green background. This is a fairly major piece of art work and I would assume that this location would have been the building of the local Party of Labour Branch.

The star in itself is interesting but this particular one is accompanied by other tantalising snippets of information. Similar stars would have been common during the Socialist period but I haven’t seen many.

The roundel is well made and inside, through the use of different coloured stones, there’s a simple mosaic of the star. Five pieces of isosceles triangular red stones, their apex touching the inside edge of the roundel, each meet, at the base, a narrow, rectangular piece of red stone which creates a regular pentagon. These border pieces are offset from the plane of the star points and creates a clearly defined ridge. Inside the border a stone, in the shape of a pentagon, finishes the star.

As I’ve stated in all the posts about the lapidars the red star is the symbol of Communism and the Communist Party. I would interpret the green as representing the countryside.

However, this red star has something quite unique in the centre. If you look carefully you’ll see that a small Hammer and Sickle has been carved into the stone. This is the symbol adopted by what became the Communist Party of the Soviet Union during the Russian Revolution of 1917, symbolising the unity of the industrial workers with the peasants of the countryside. It was also later adopted as one of the symbols – in gold – of the national flag (together with a golden star on a red background). The pairing was also adopted by other Communist movements in subsequent years but very soon after Liberation the Party of Labour adopted their own, national, symbol to represent their struggle and that was of the Pickaxe and Rifle, symbolising the need to build and protect Socialism with the preparedness to fight for, and to defend, it.

Around the central motif are other interesting carvings.

Immediately above the topmost point of the red star is a rough image of a dove (symbolising Peace) carved into a piece of white, smooth plaster. On the left of the dove is the number 19, on the right the number 54, so something happened here in 1954. To the right of the dove, now being carved into the plaster rendering of the wall, is the name Enver. This would be Enver Hoxha, the leader of the Party of Labour of Albania. Further still to the right, and finishing at the corner of the building, are other carvings. I think I can make out the Roman numerals VII and the numbers 1954, so my assumption is that this indicates July 1954. Perhaps the indistinct letters/numerals tell which day in July. This could well be a local way of celebrating a visit to the community by Enver Hoxha in that year. I’ll try to get a closer view of these images during my next visit.

The star hasn’t been treated with loving care over the years but then neither has it been seriously vandalised. When the wall has been white-washed not a great deal of care has been taken to avoid paint splashing over the roundel. However, this doesn’t mean that a re-writing of history has not been attempted. At the very bottom of star a section of the roundel has been cut away and a rectangular, inscribed stone inserted. For whatever reason this has been plastered over but time and the weather have broken away some of this new covering and letters can be see underneath. What they are will have to await another visit to Krrabë.

Getting to Krrabë from Tirana:

The bus leaves from the bottom of Rruga e Elbasanit in Tirana, close to the junction with Bulevardi Bajram Curri . They leave every half hour, on the 15 and 45 minutes, although departures get more erratic at midday. Return journey is based on the arrivals from Tirana (and the time of day) but if you miss a bus there’s a couple of small bars close to the bus stop. The journey takes about an hour and the cost is 120 lek. (If you go by car the road is very rough after it leaves the main Tirana-Elbasan road by the lapidar at Mushqeta.) 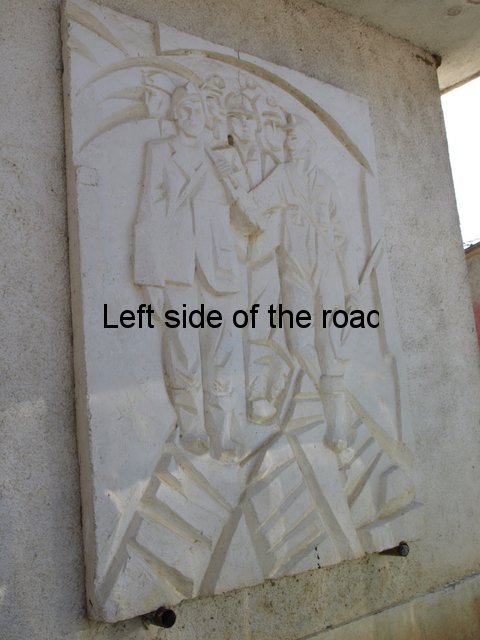 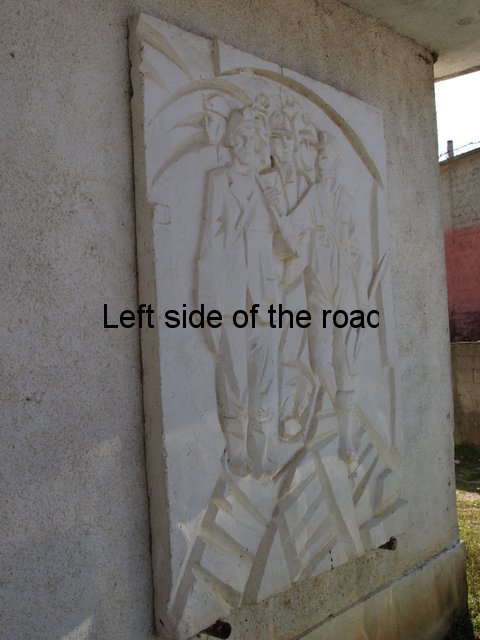 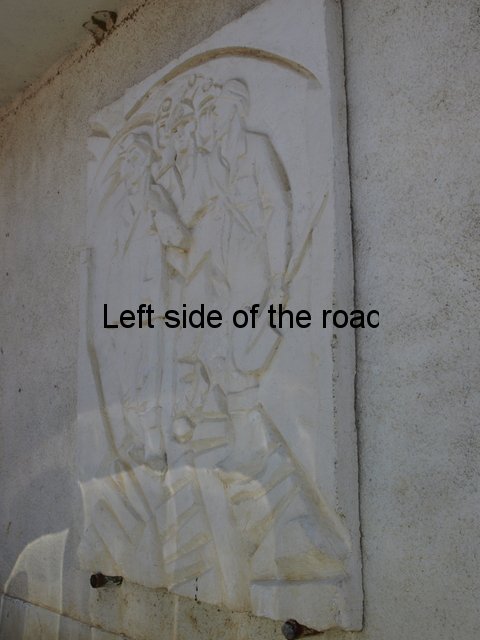 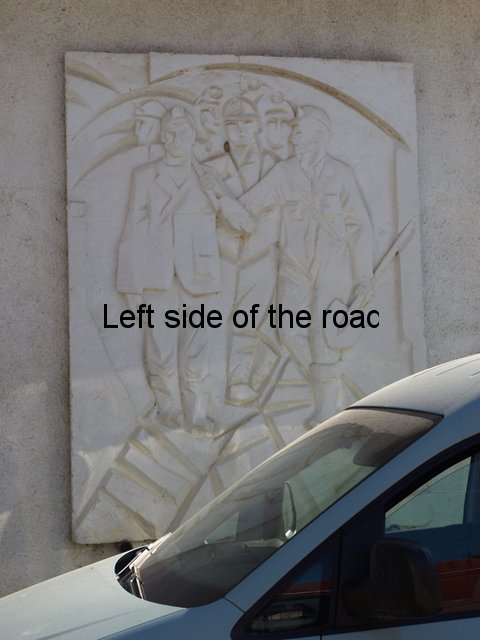 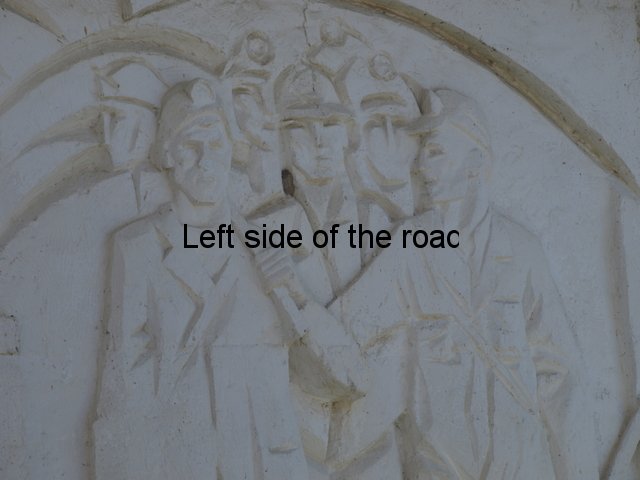 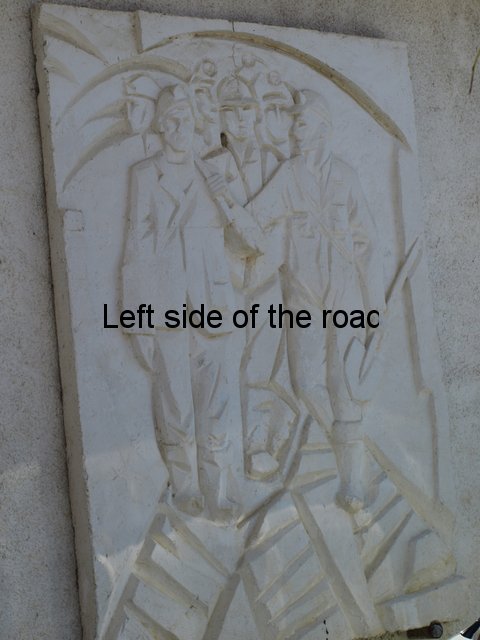 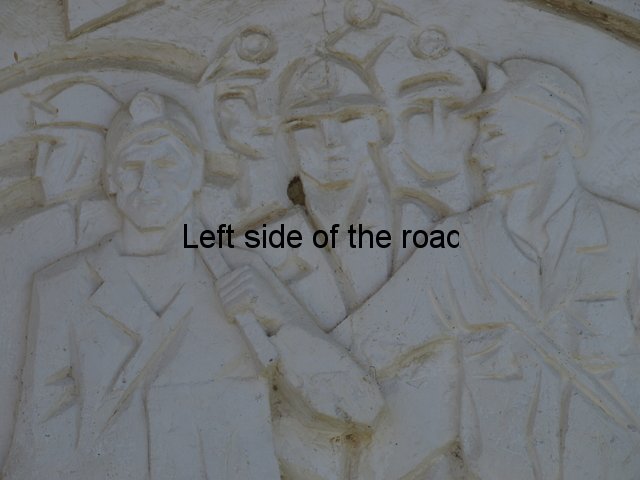 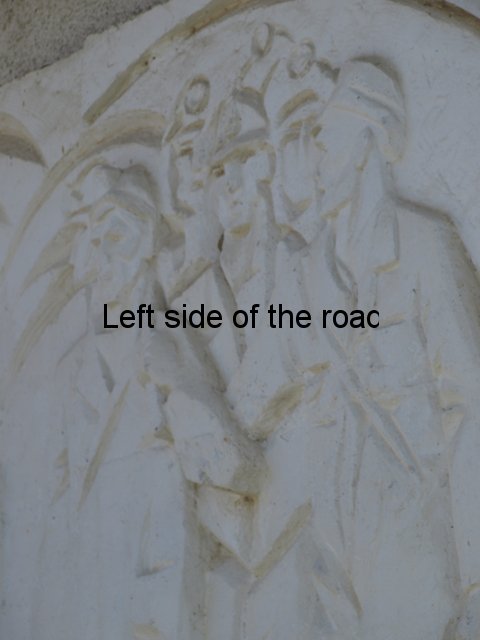 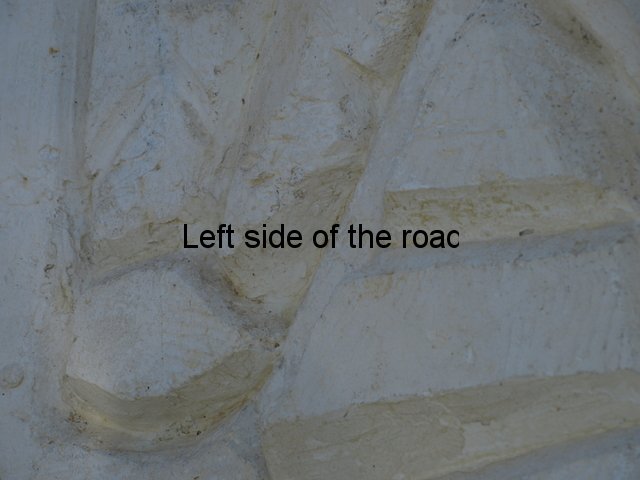 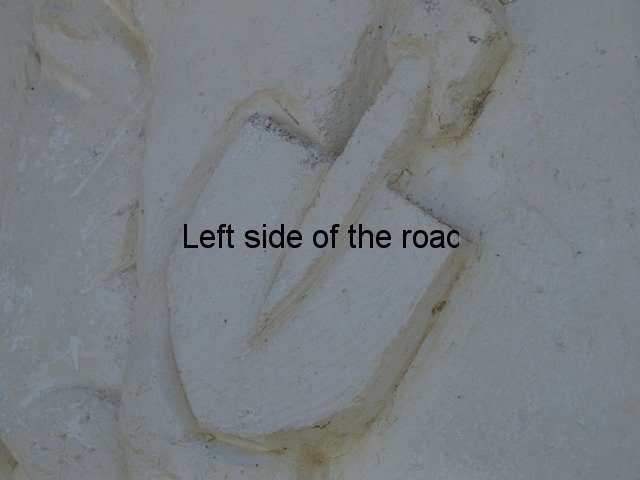 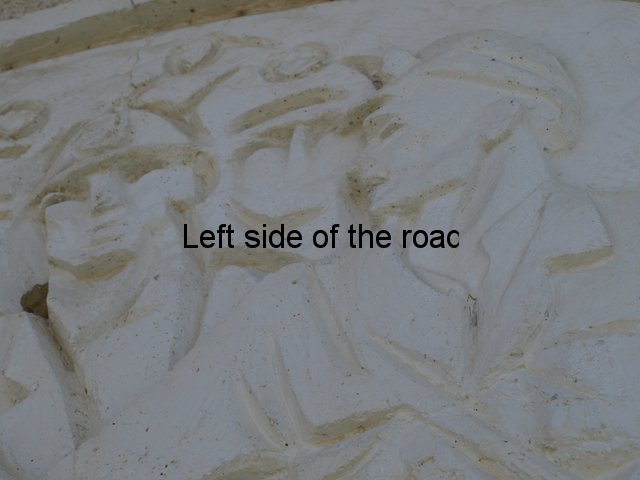 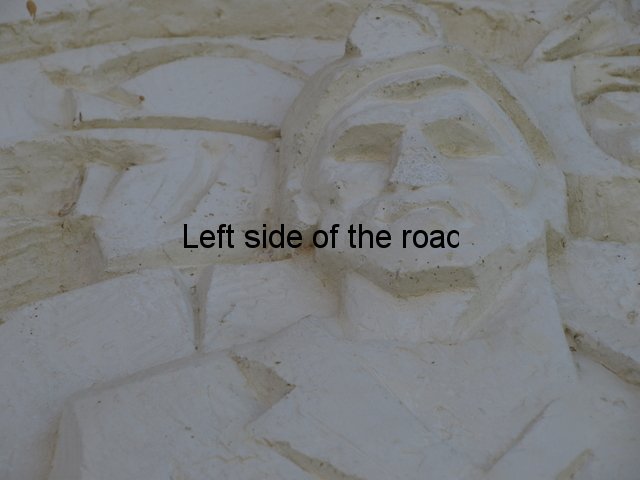 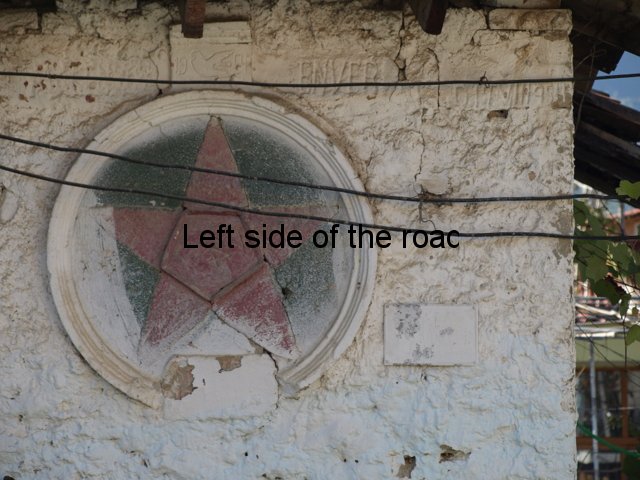 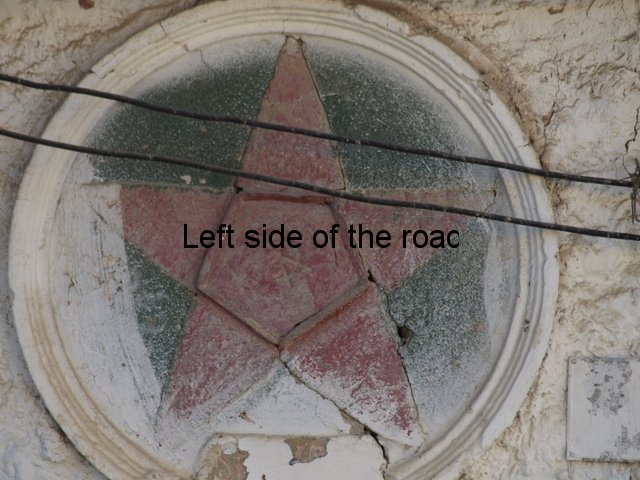