Anyone who has travelled around the not totally foreign tourist dependent areas of Catalonia in the summer months might well have come across a group of castellers, the people who construct human towers which vary in height and complexity dependent upon the number, size, experience and expertise of the colle (group). I’ve only seen these towers a few times in real life (although quite a number of times on the television – a similar experience I have to bull fighting) and didn’t really understand much about the practice until I had the chance to attend a practise session of a group that has recently been formed, the Castellers de Sant Adrià de Besos, Barcelona.

I was only there for little over an hour and a half but on leaving I had a much greater understanding of what the construction of these towers entailed and, I must admit, a greater appreciation of not only the skills, courage and strength needed to get to the dizzying heights achieved by the most famous colles in Catalonia, but also of the amount of time and effort that’s needed to even get into the lower leagues of the game.

After such a short time I’m by no means an expert and won’t attempt to go into too many of the technicalities here but I’d just like to express a few observations that came to me as I walked around the local community hall trying to capture the feel of the session on film (OK, it’s all digital now but it doesn’t have the same effect if I said ‘on digital’) in somewhat difficult light conditions.

The fact that this session was talking place indoors (it was still winter) placed a certain limit on what could be even attempted. The group had only been established a few months before (in the autumn of 2013) and although there were a few who had done this before, and they had an experienced ‘cap de coller’ (group leader) who decided what they should attempt and where people should go as a group, they were generally novices.

I say that in no way disparaging what they were doing or attempting when it went wrong. One thing I believe I took away from the session was the need for trust amongst all those participating and that only comes with time and knowledge of the abilities and capabilities of those around, above and below you.

As in performance dance each participant has to have faith that the other people in the tower are doing what they should be doing. On the television I had seen towers collapse either during construction or as they were trying to get everyone down on to terra firma. In those situations those who form the base (the ‘pinya’ – bulk) have to stay put. Instinctively if something is going to fall on top of you most people will try to get out of the way. For those that make up the pinya that’s the last thing they should do. They are there for two reasons, to provide the support and take the weight of the climbers and to break the fall of those very climbers, in the event of things going belly up, who might have climbed on the shoulders of anything up to eight people to get to the top.

If the pinya is not working well then it’s a waste of time to keep on reaching for the stars as failure is certain. As I watched the pinya forming I could see that those further from the centre of the circle would place their hands on the hands and arms of those closer to the centre. It’s very much the same role as a buttress plays in a large building or the spreading roots of large trees like mangroves, which send down branches to become roots to cope with the extra height and weight of the tree as it matures.

In the same way the more adventurous the colle becomes and the higher it aims the stronger and more numerous the pinya has to be. In the colles that aim for nine high there are more than a hundred people on the ground needed to provide that support. At times they will have a second ‘base level’ on top of the pinya (called a ‘folre’ – cover). The pressure the folre must place on the people below must be immense as to do their job of pressing up to support the ones constructing the tower they must be pressing down on those below. But I’m getting ahead of myself, the colle in Sant Adrià are some way from having to address that problem – which I’m sure they’d admit themselves.

The heat that must be generated in the centre of this crush, especially when they are performing outside in a Catalan summer, must be immense but like a tree or a flower the castell will not survive if the roots are not firmly planted.

One of the most important elements of the dress of the castellers is the ‘faixa’ (the sash). This is normally black and can measure up to 12 metres long for some of the bigger individuals of the pinya. It takes two people to put on the sash. One person will hold the end tight as the person wearing it turns their body to wind the faixa around their waist. They have to decide how tight it is to suit their own personal preference. It needs to be tight so that it provides support but not so tight that it becomes uncomfortable. The faixa has two roles: the first to provide support for the back and the stomach muscles (as you see with weight lifters) and secondly to provide a foot hold for those climbing up their bodies. Often there will be another, personal, bandana around the centre of the faixa to provide more foot and hand holds.

Those who do the climbing, at whatever level, do so barefoot. This enables them to get a better feel of what they are standing on and also makes it less unpleasant on those they are standing. It’s interesting to see the climbers as they clamber up people, the very young children grabbing hold of whatever seems like a handy piece of cloth or flesh in order to get to the top. It’s also interesting to see how those already in the tower bend their knees, for example, to provide yet another foothold for the climbers.

One thing I couldn’t work out and had to ask about was the reason for gripping both the collars of the shirt between the teeth. I was told that this was to prevent the shirt ripping and making the climber slip. When you think about it this makes sense. People have to move fast so that the task they are attempting can be completed before they start to put too much strain on the ones below. (If you look on the internet for videos of the castellers you’ll find that most are less than five minutes long for them to get to the top and then down again, even for the most complicated.) A slip by even a very small child could have knock on consequences that could bring the tower down.

And it’s the small and very young children of 5 or 6 who are crucial for the success of castell making. However high you go the tower is not considered complete and the exercise over until the ‘enxaneta’ (literally rider, but meaning the topmost casteller) has gone up one side, reached the top and raised a hand with 4 fingers erect (said by some to represent the 4 bars on the Catalan flag) to then go down the other side. After that the whole tower deconstructs and it is not until everyone is on the ground is it considered a success. This is very much the same way as people should approach climbing mountains, it’s all very well getting to the top but the most difficult and important is to get down again – something which the British and their infatuation with Mallory and Irving who died in their attempt to climb Chomolungma (sometimes erroneously known as Mount Everest) in 1924 don’t seem to understand.

These enxanetas are increasingly young girls. At such a young age they have little in the way of fear and as long as they are nurtured (and now wearing crash helmets) there should be no reason why those young girls in Sant Adrià won’t be able to get to the top of the 8 stage castells. Perhaps Tete in the 1994 Bigas Luna film, La teta y la luna, was too old and too obsessed for the task.

I was told that a colle has to be able to regularly achieve a tower of ‘sis’, six, levels to be accepted as bona fide. In the community hall the group was able to reach 4 high but then had the problem of the ceiling getting in the way. I’m sure that with the return of the sun and the possibilities of practising outdoors they soon be attempting such heights.

I hope that when the Castellers de Sant Adrià colle attempts the Quatre de nou amb folre i l’agulla (Nine levels of four people with the second base level and the ‘agulla’ (needle) of nine people inside) I will be there to record the achievement for prosperity. 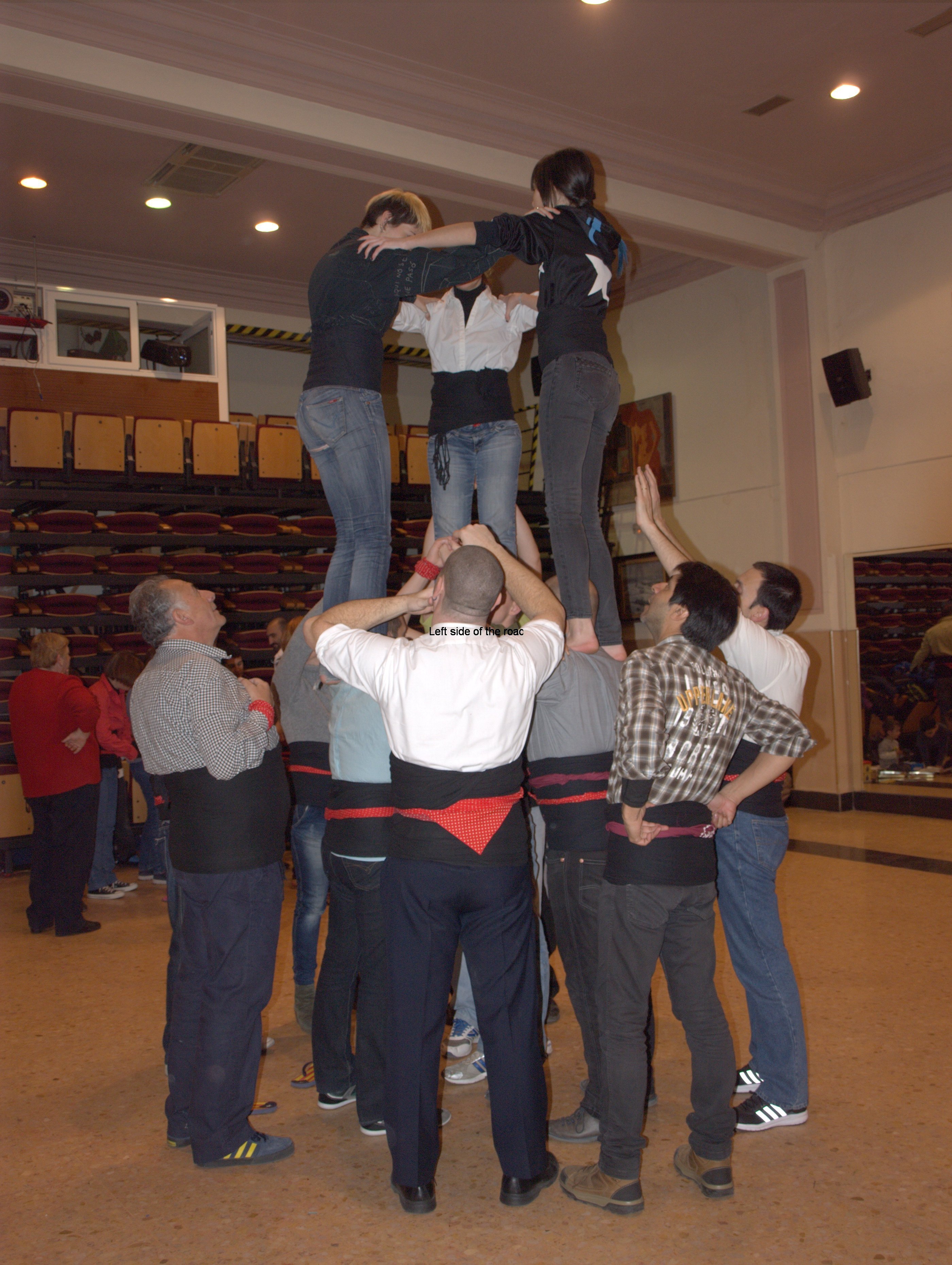 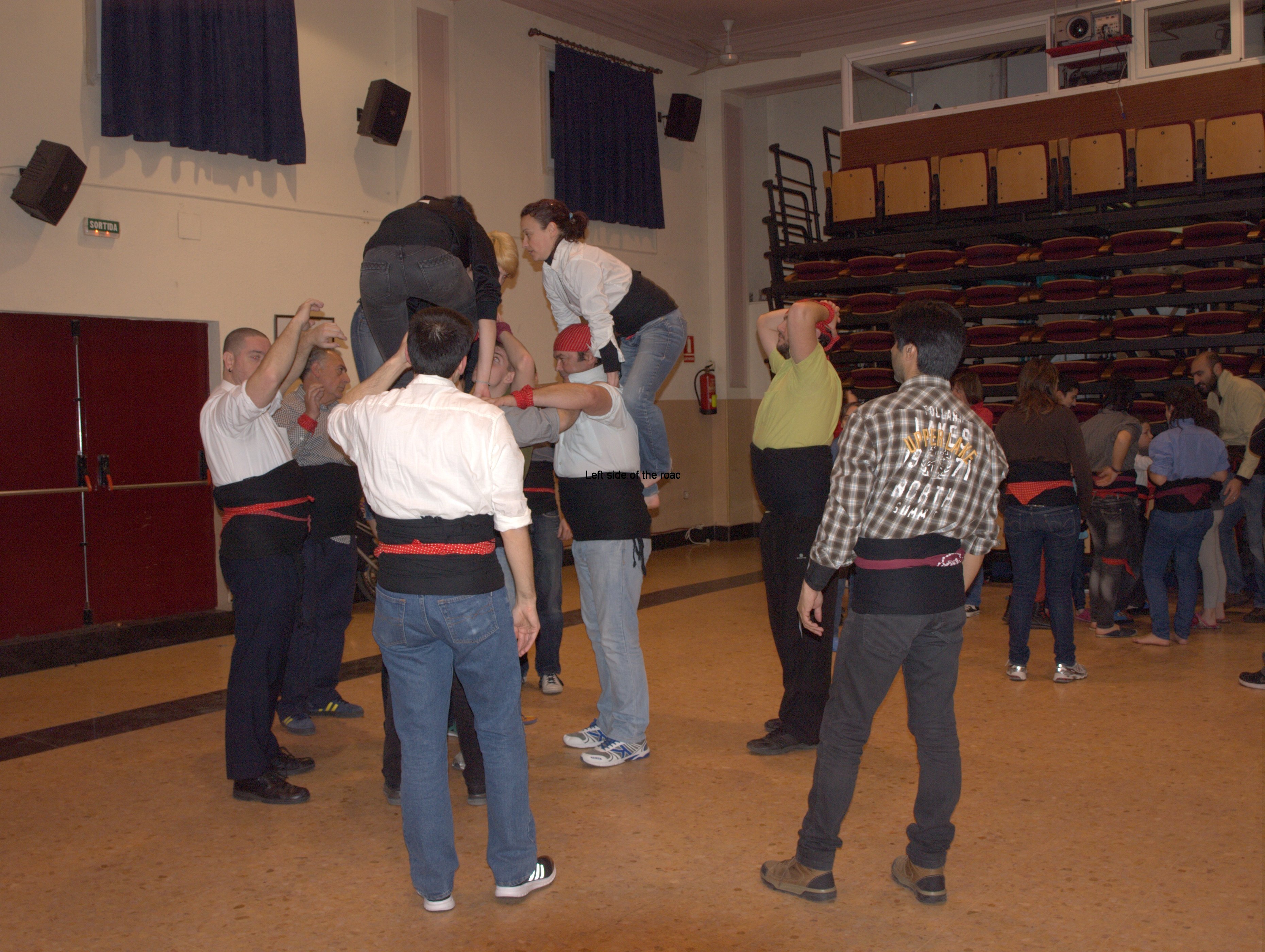 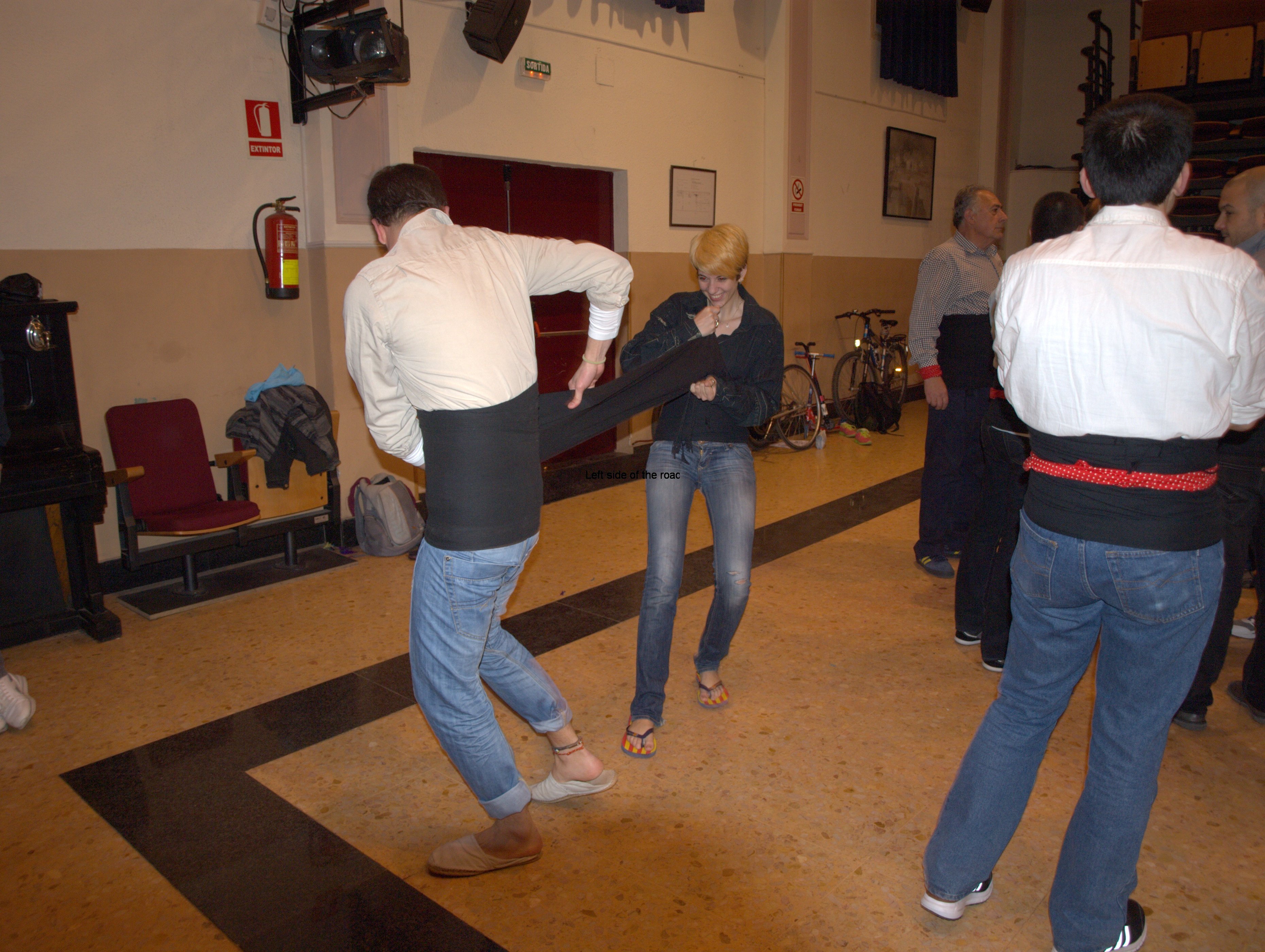 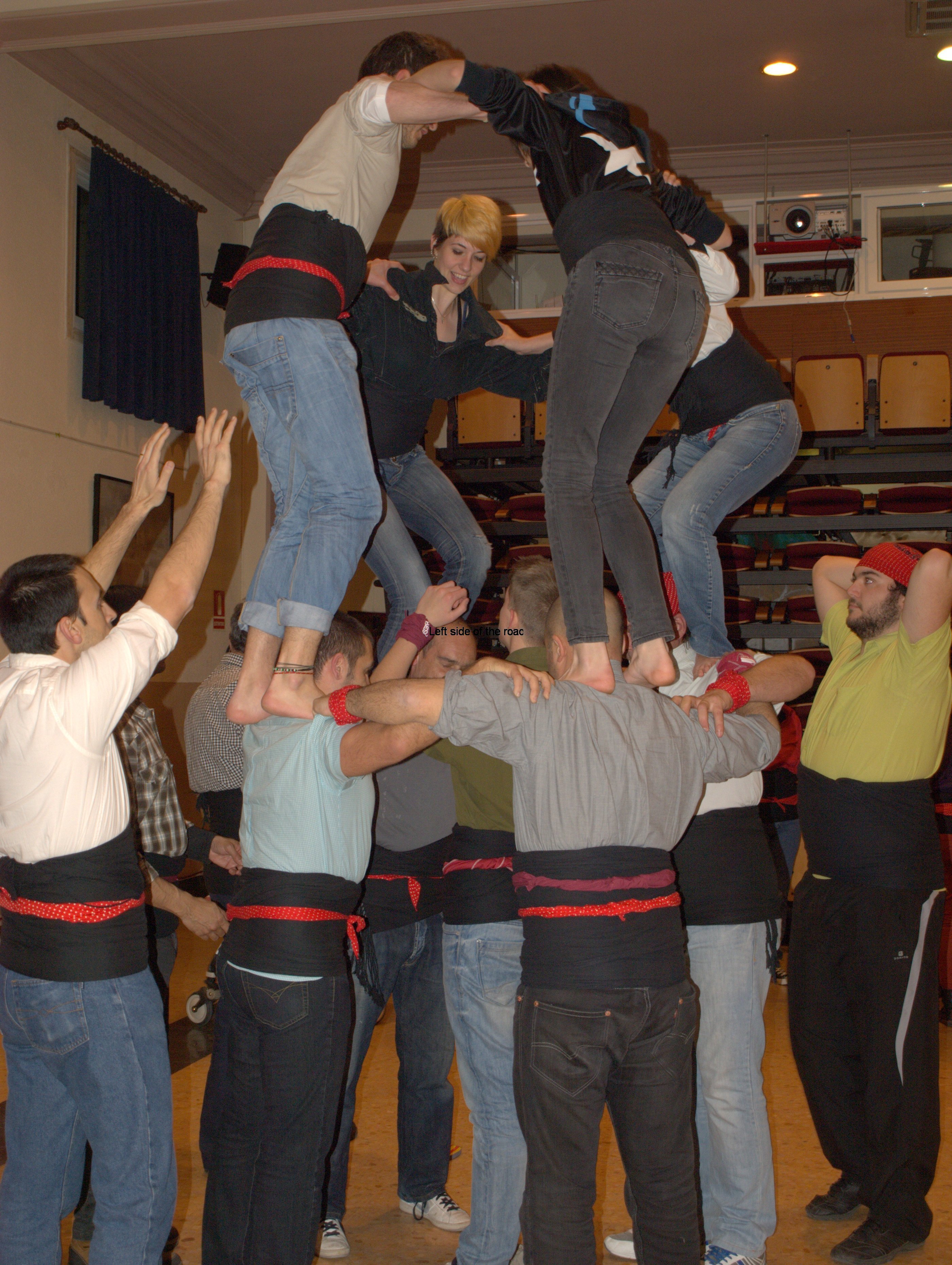 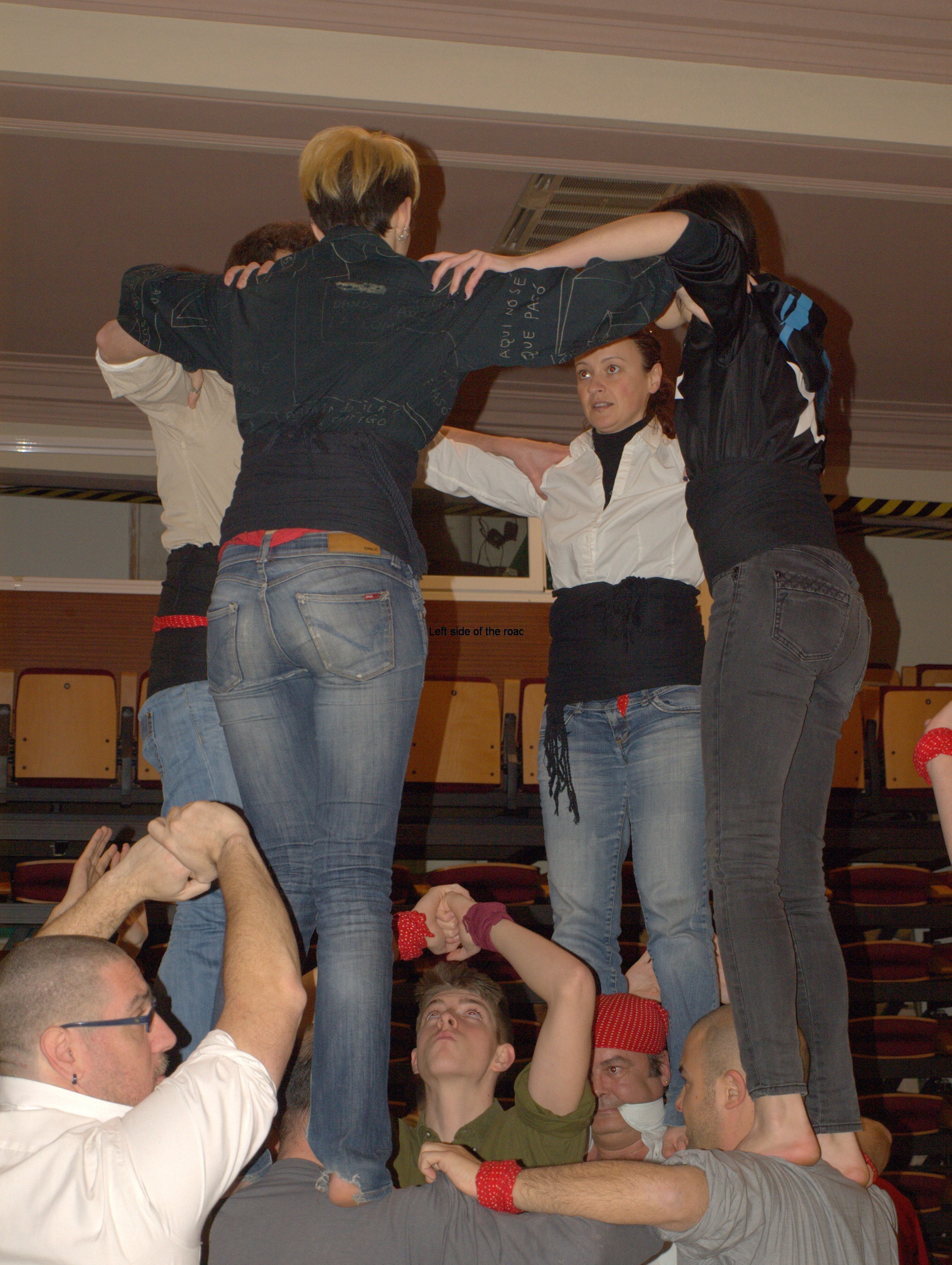 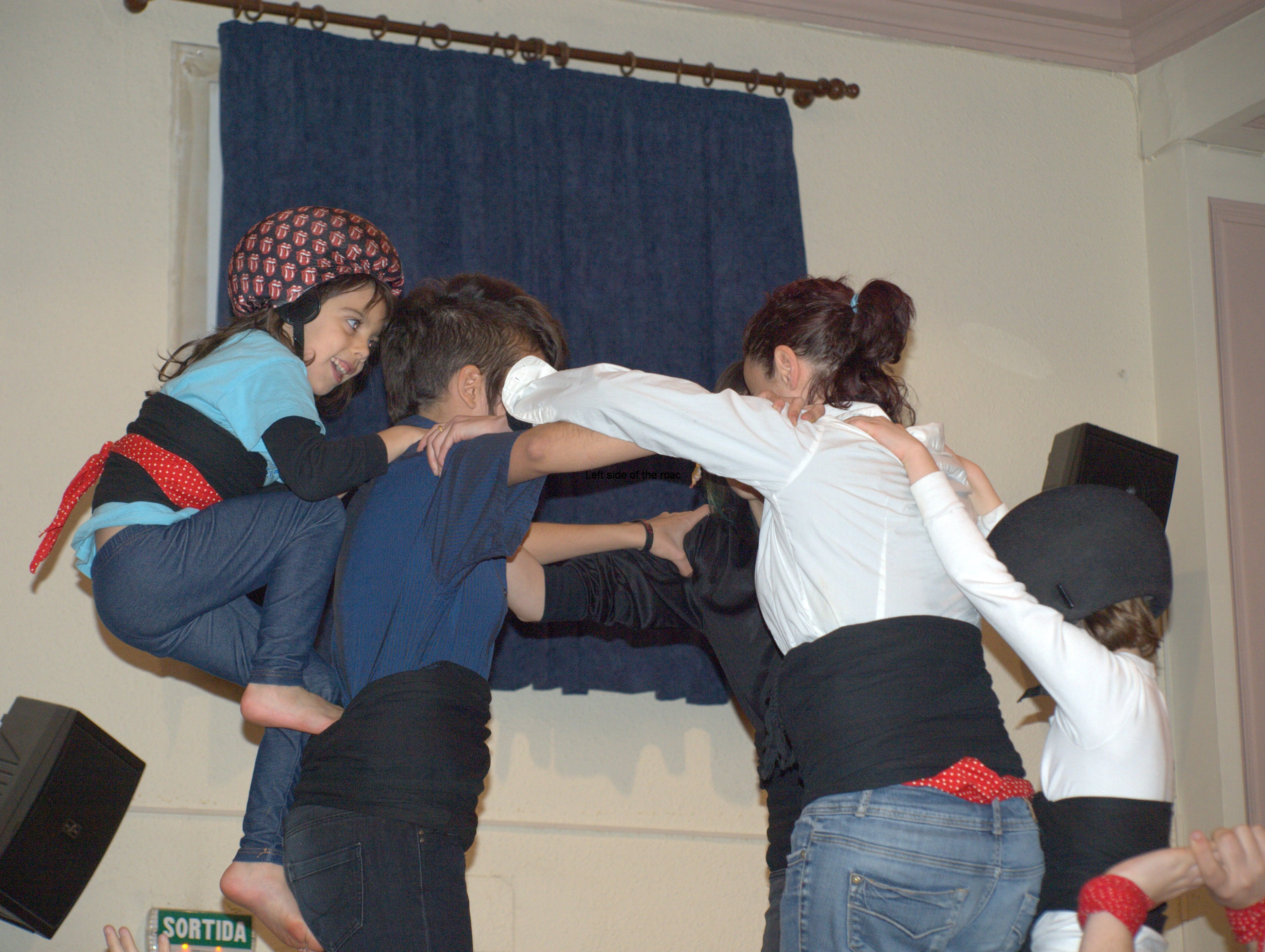 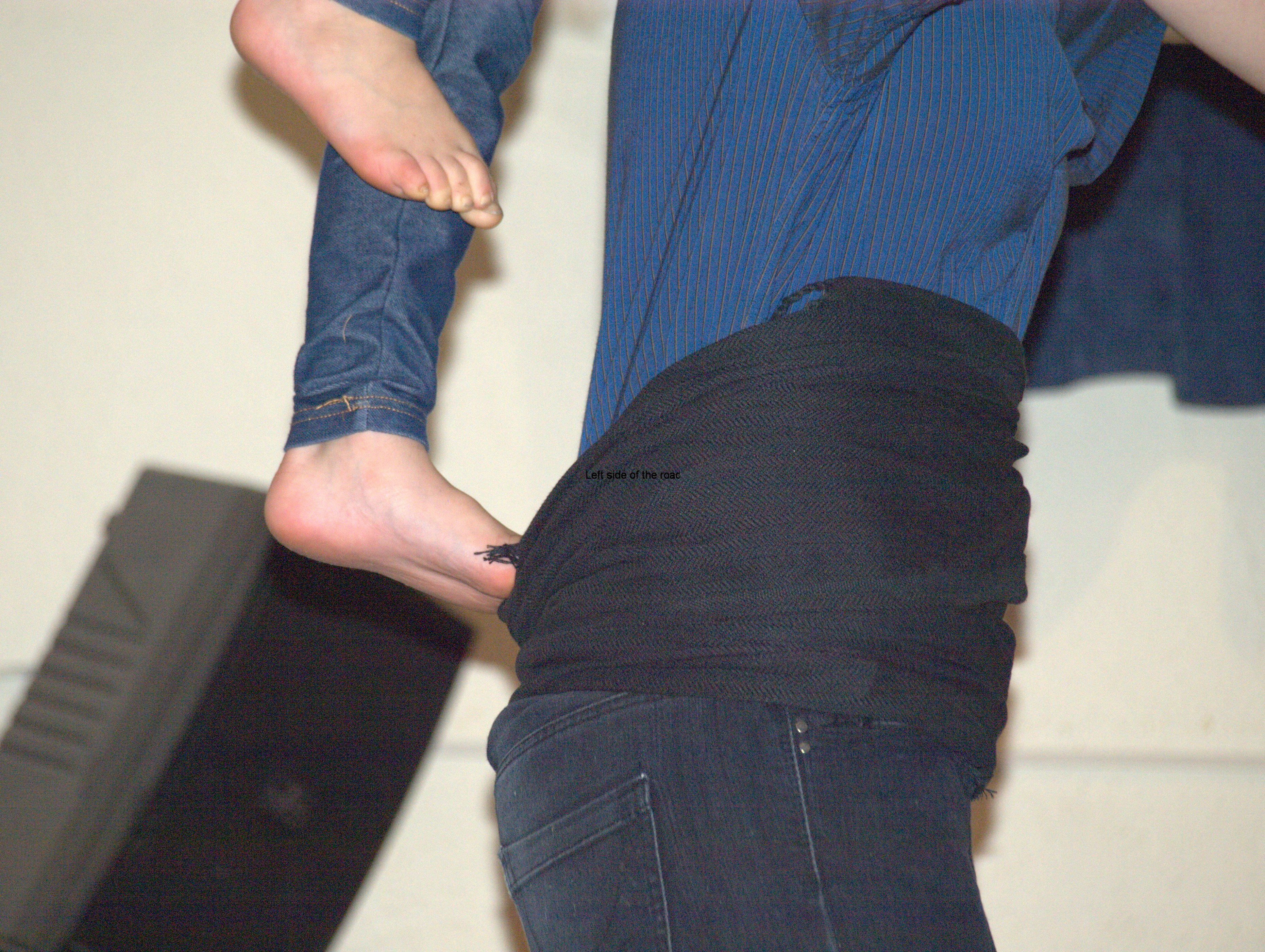 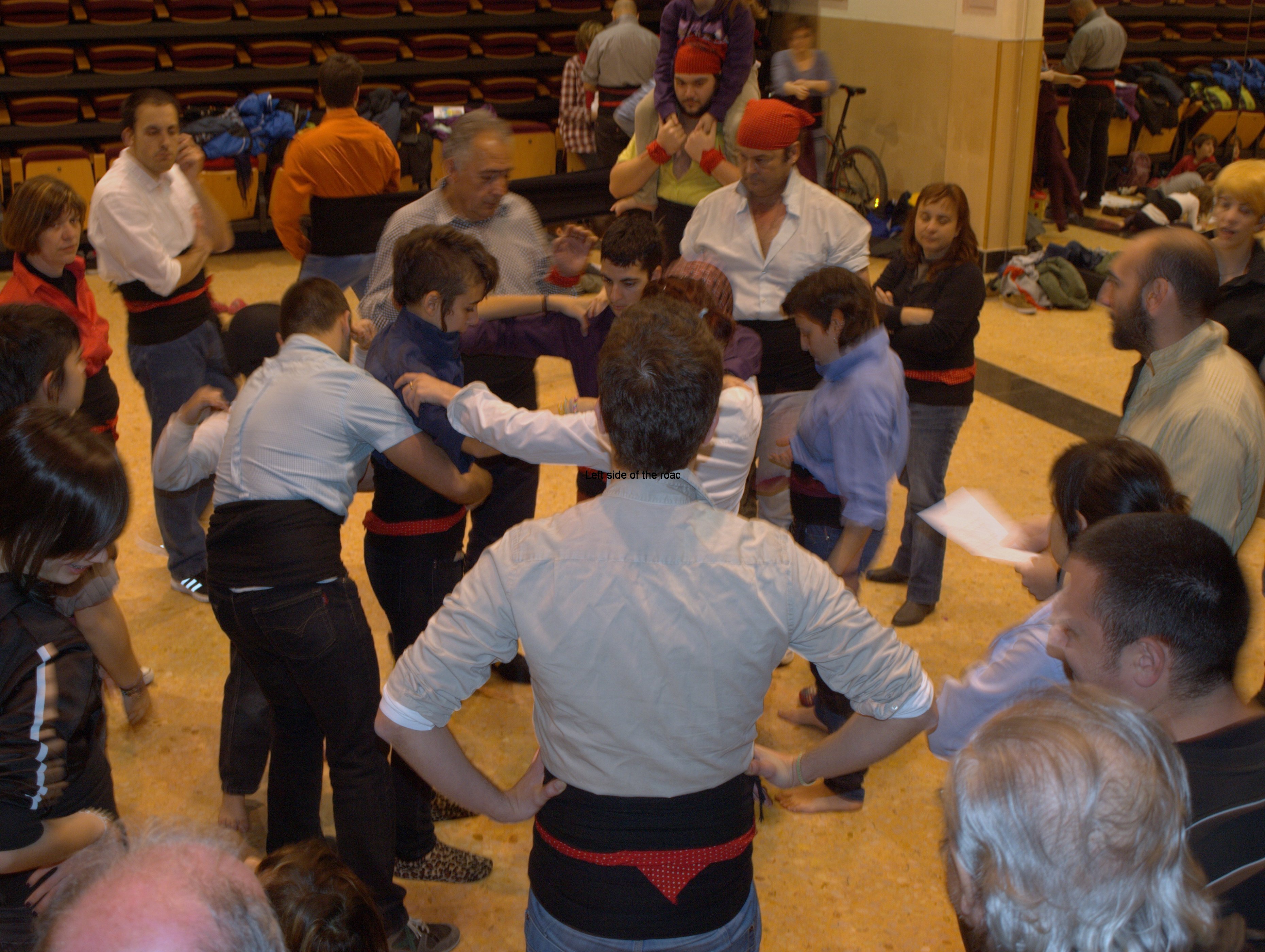 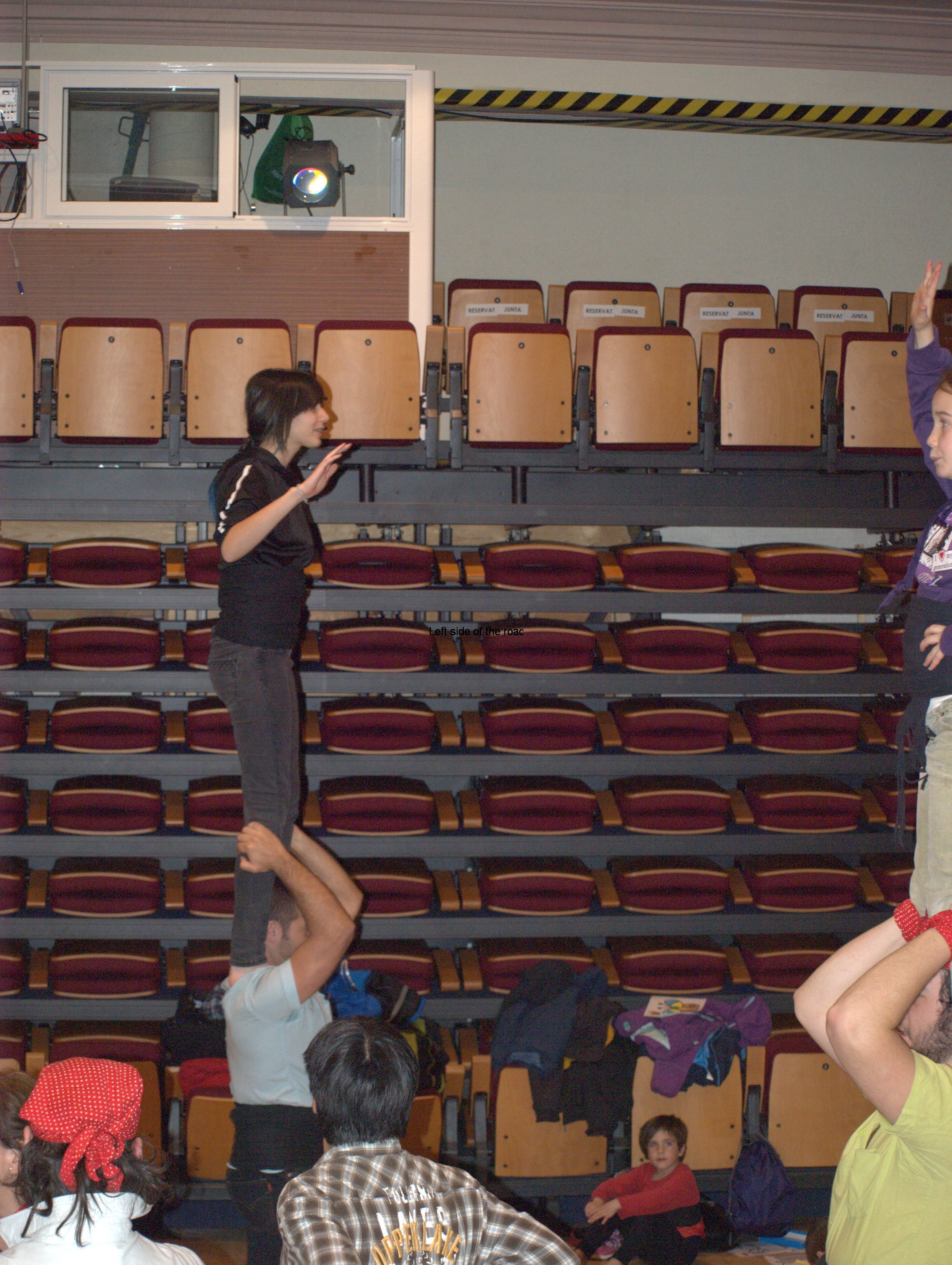 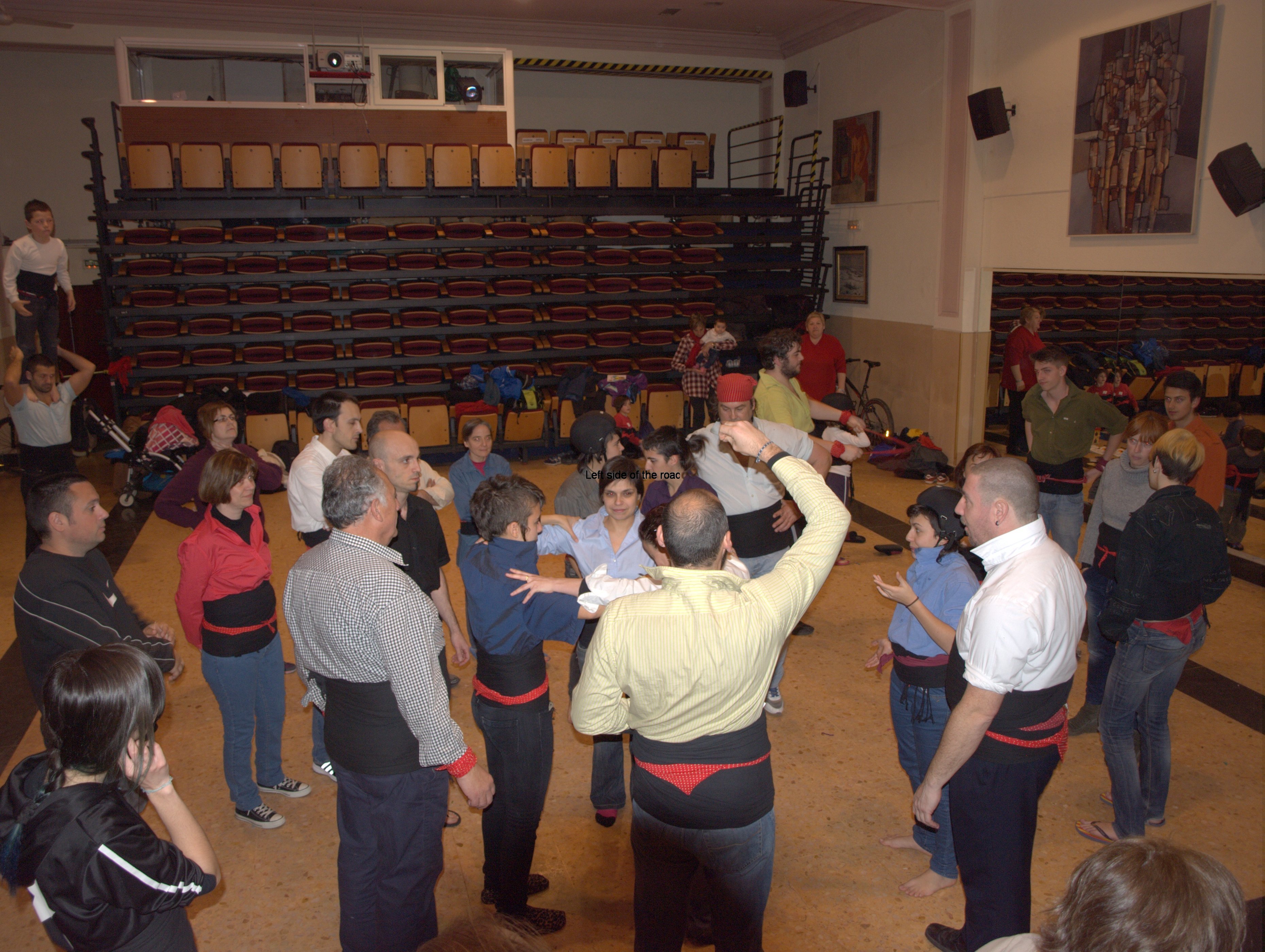 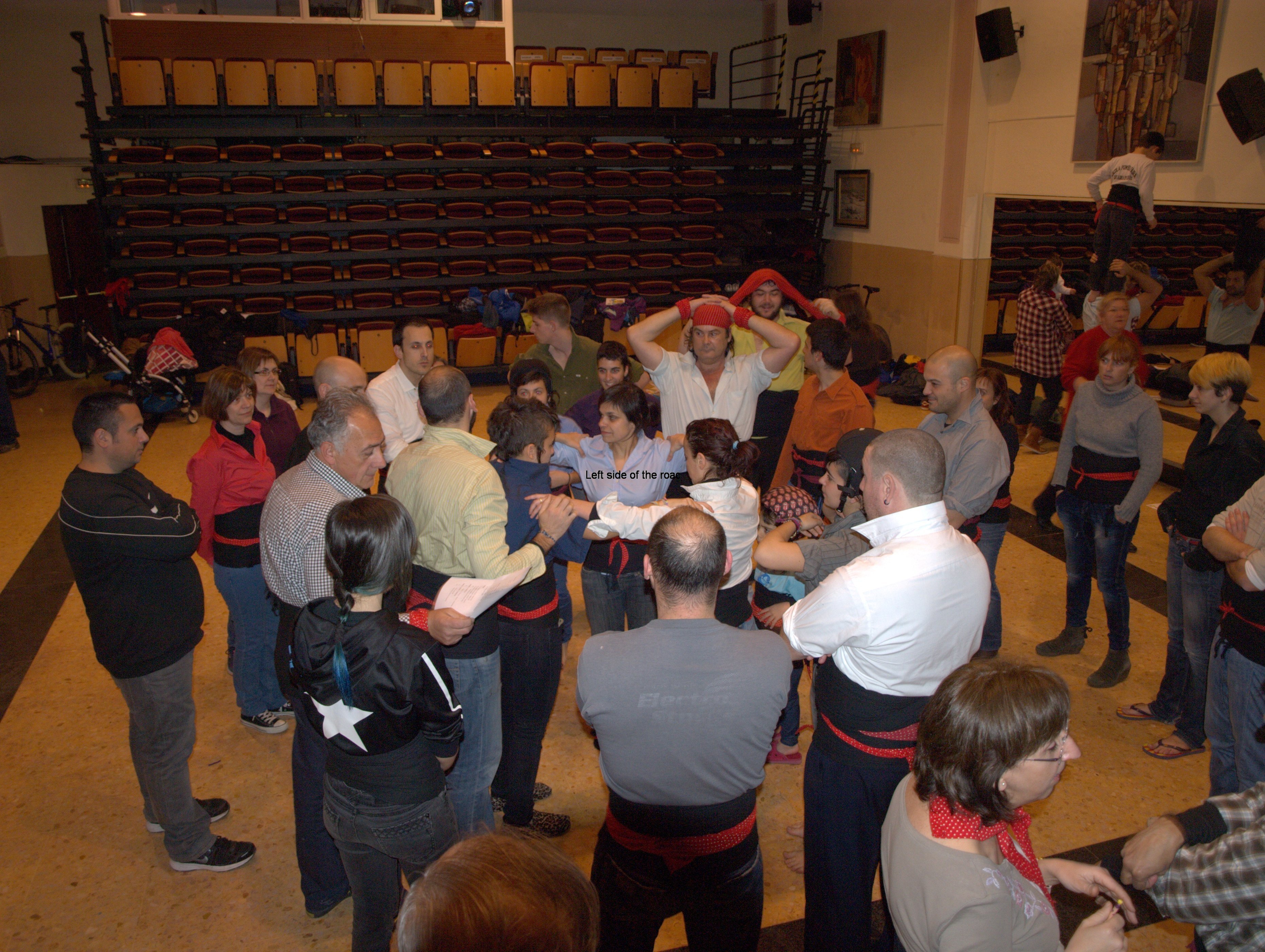 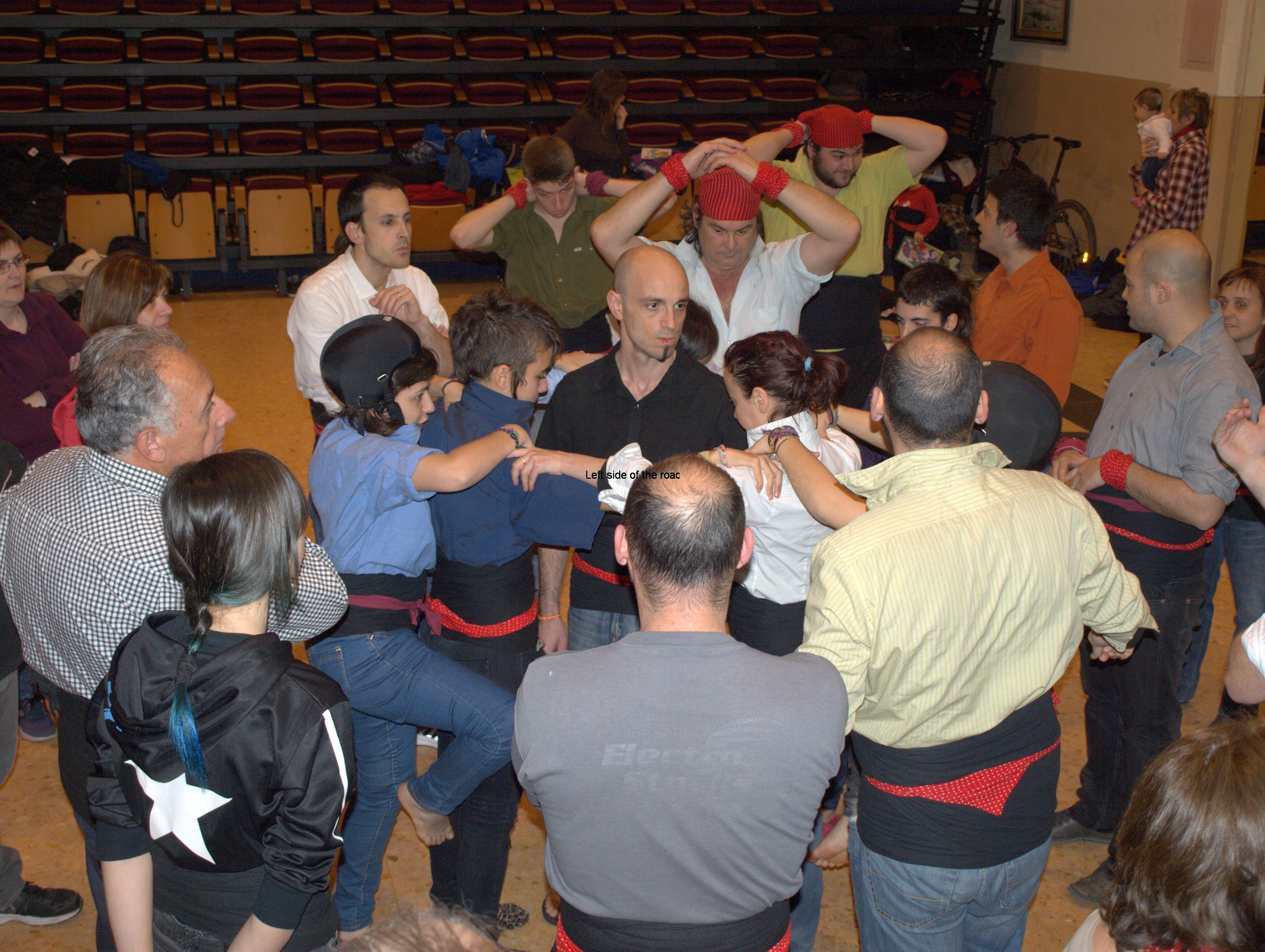 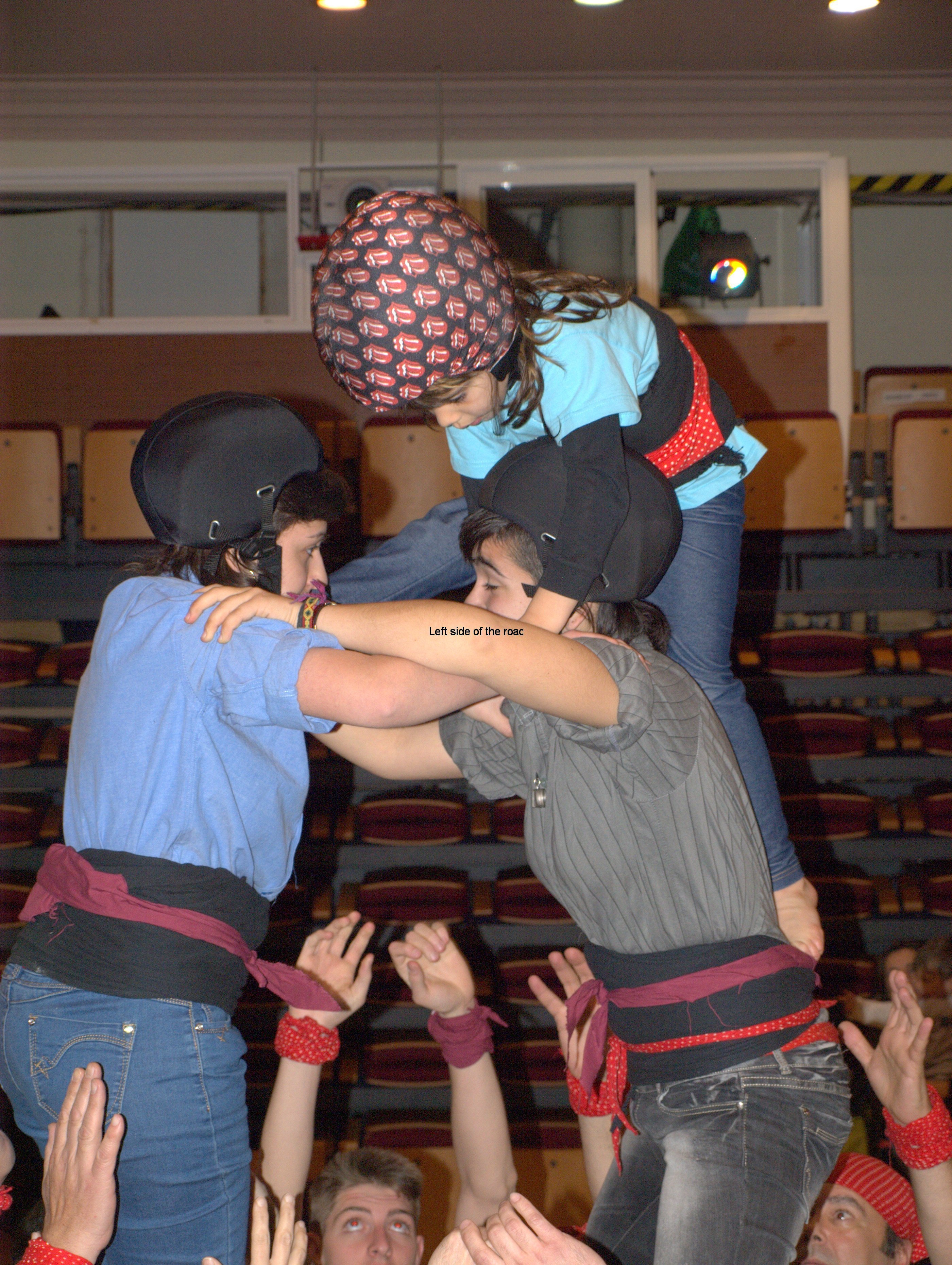 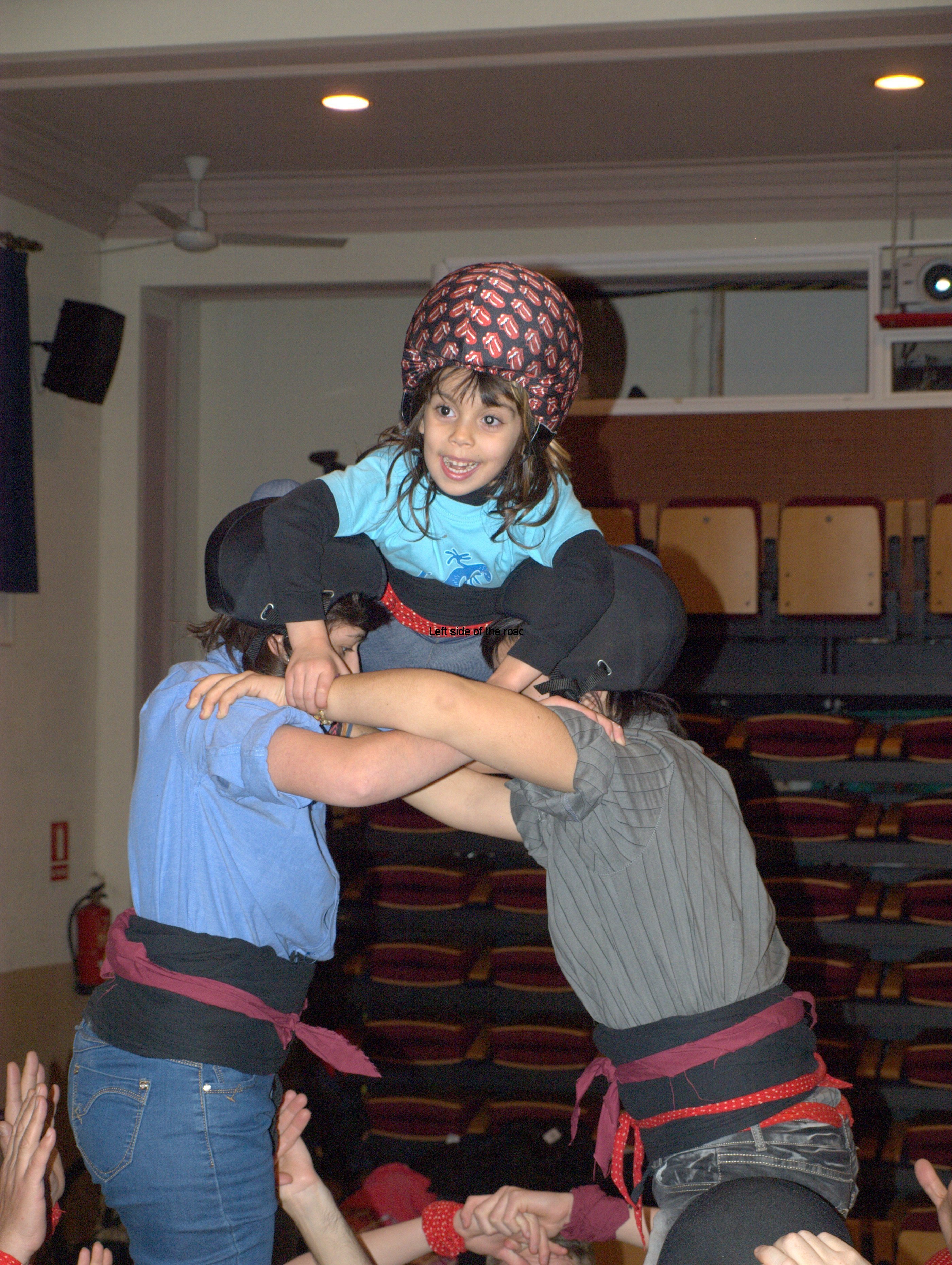 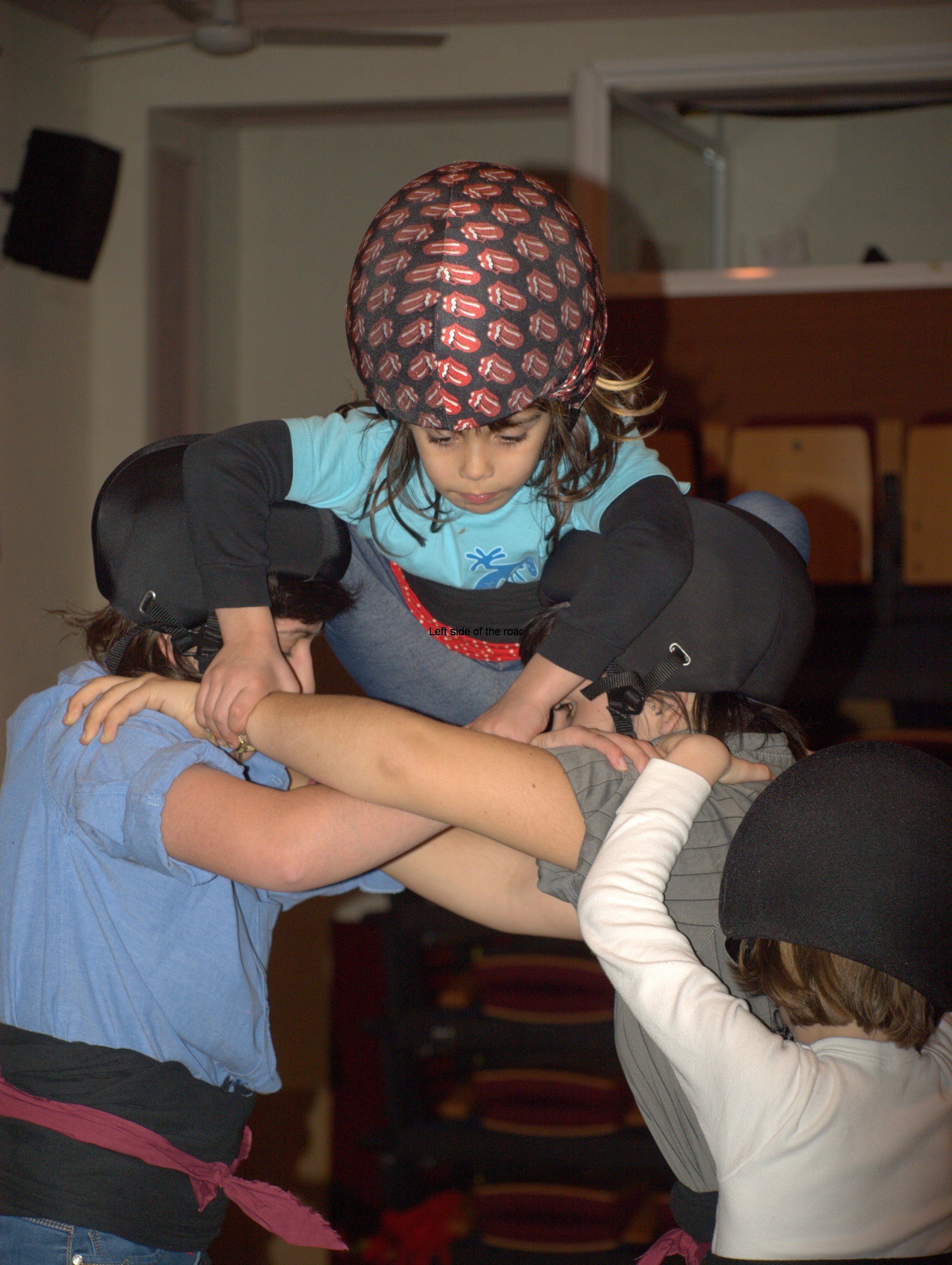 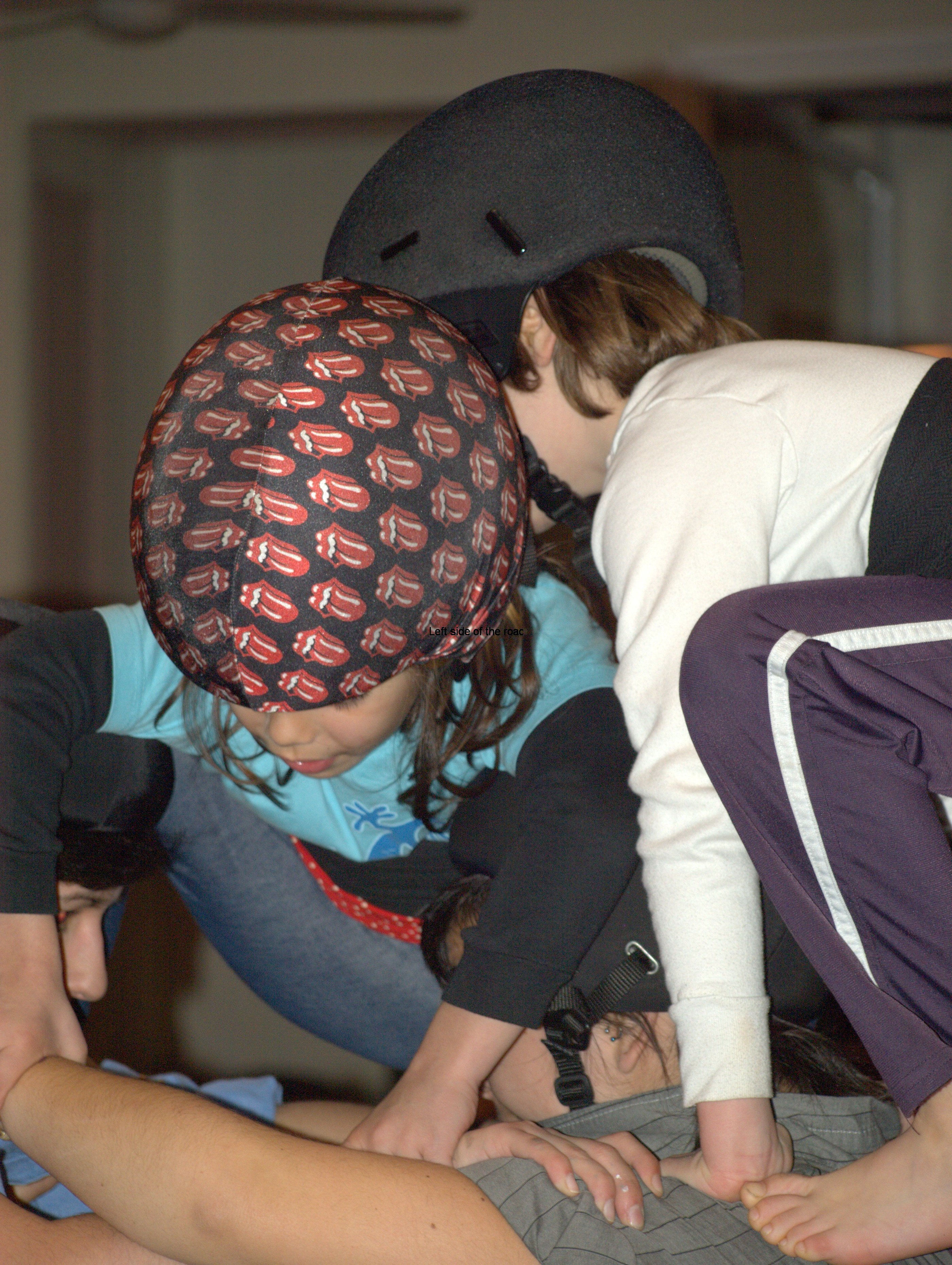 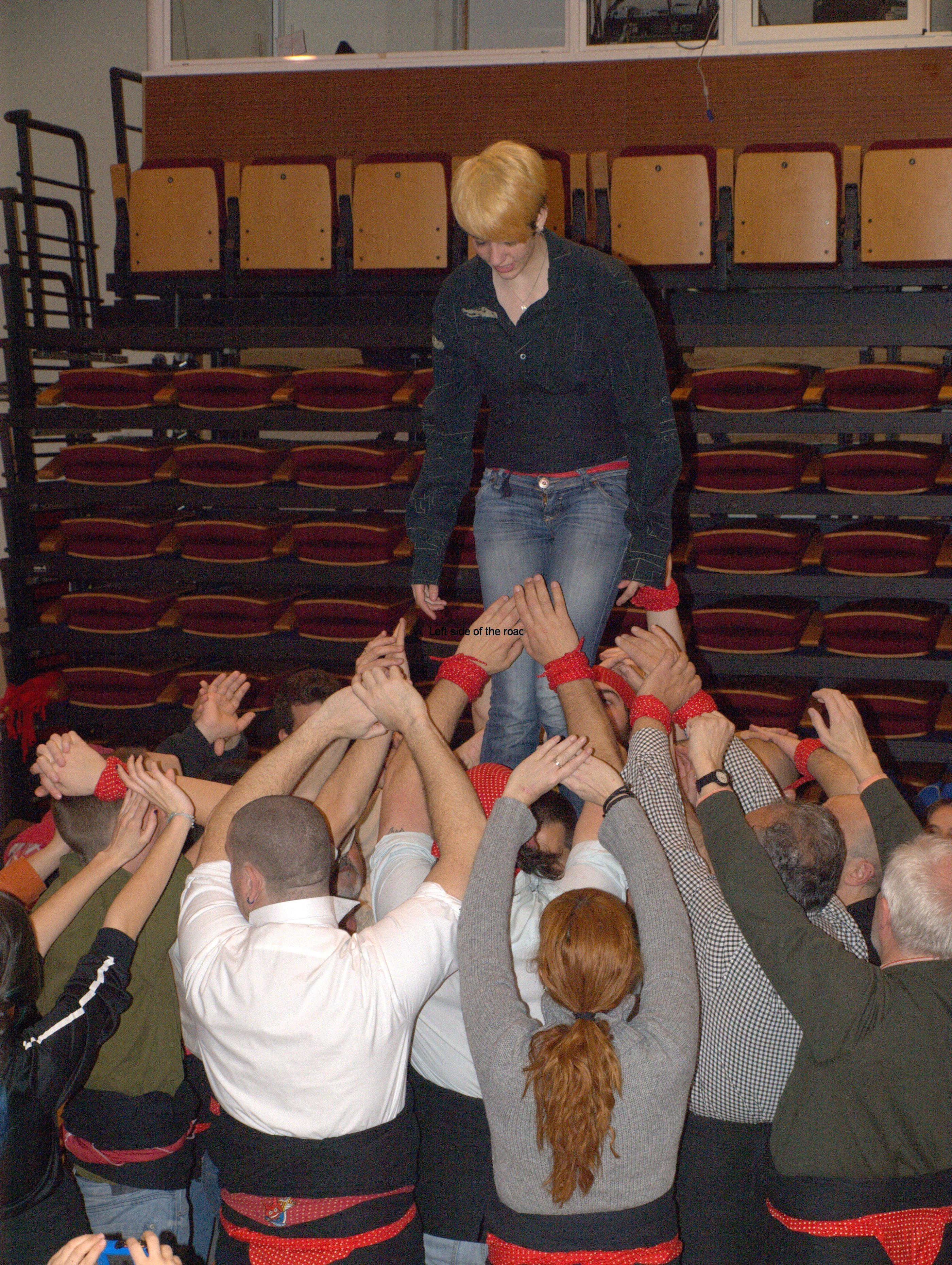 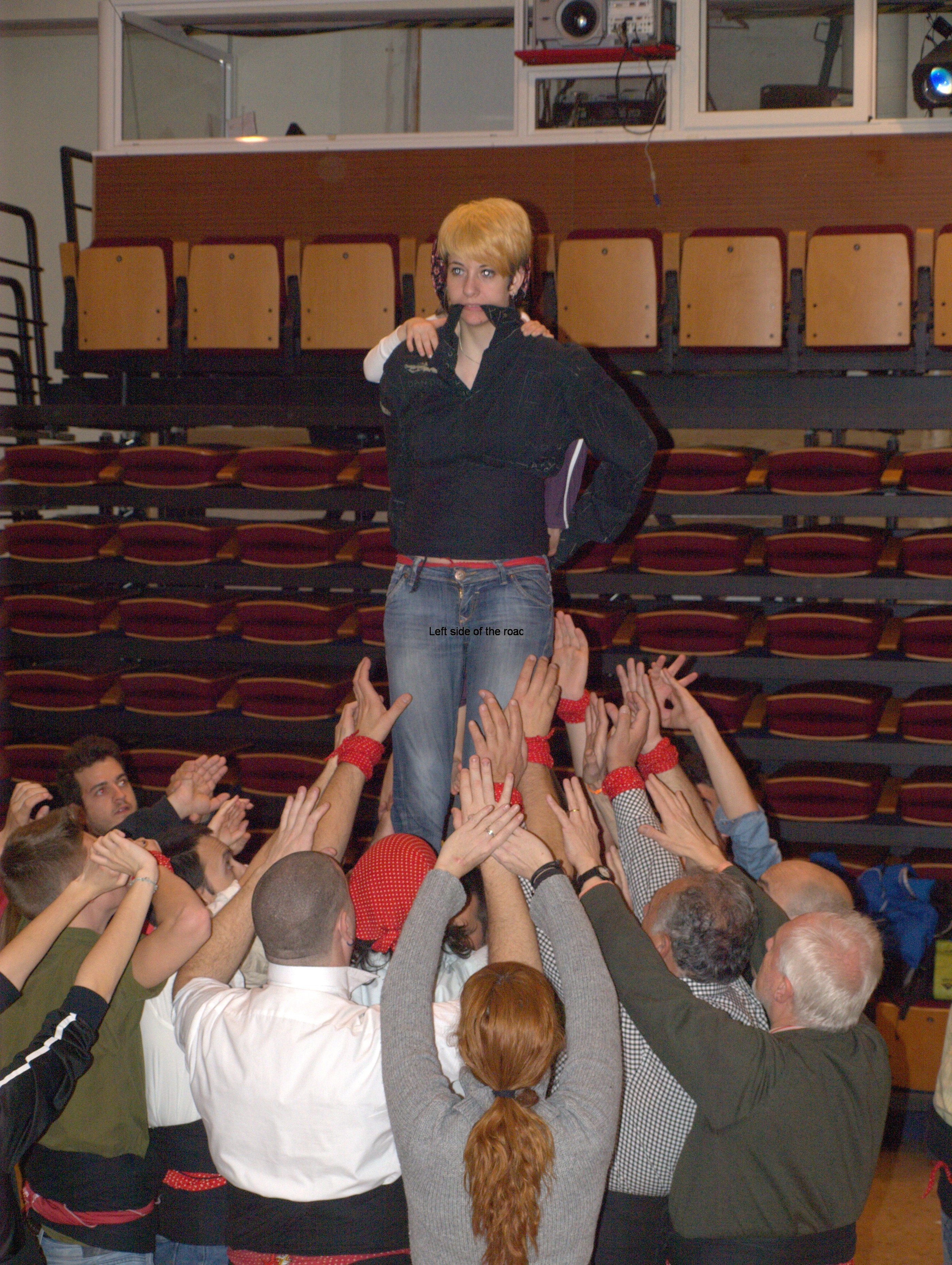 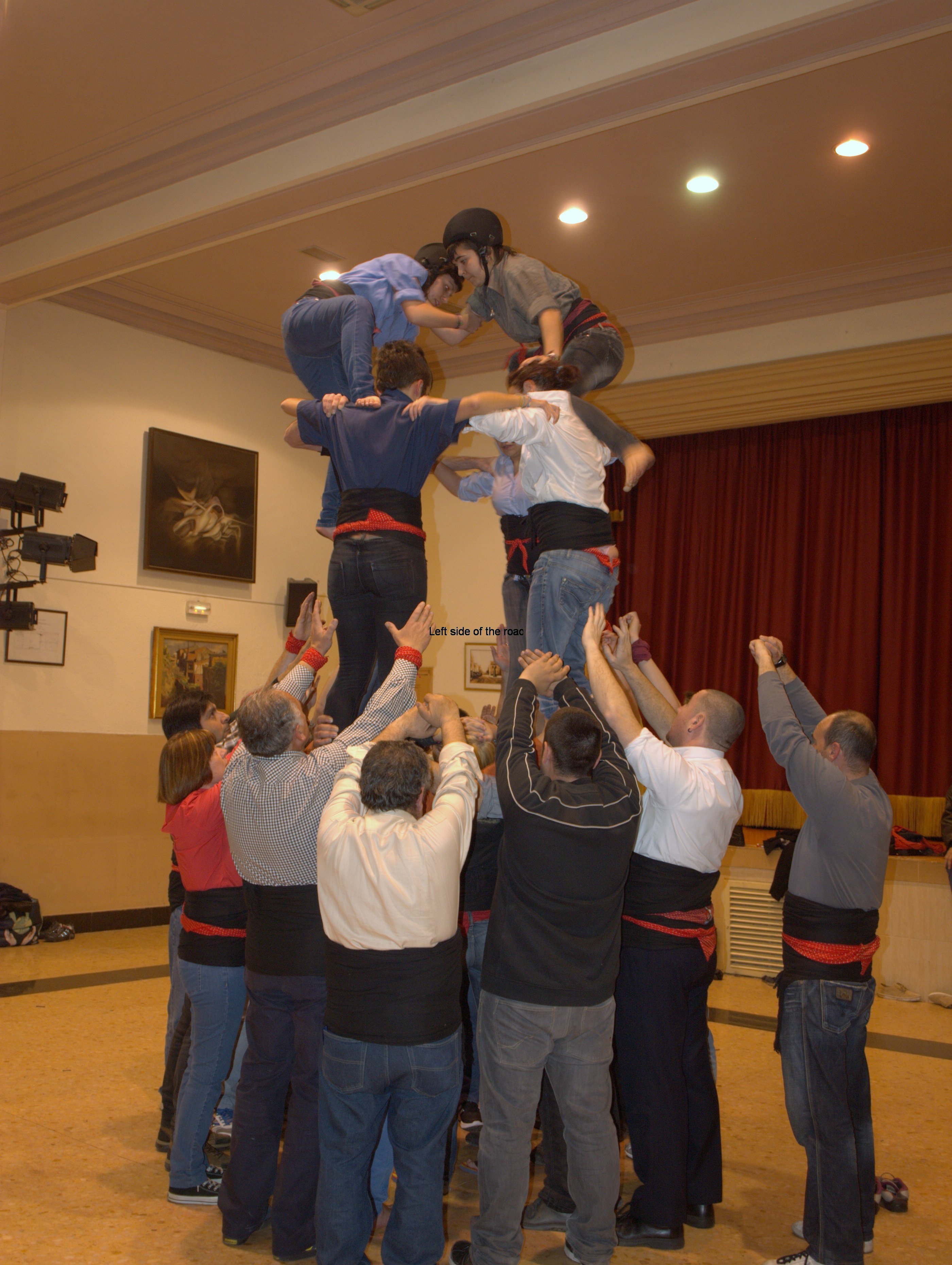 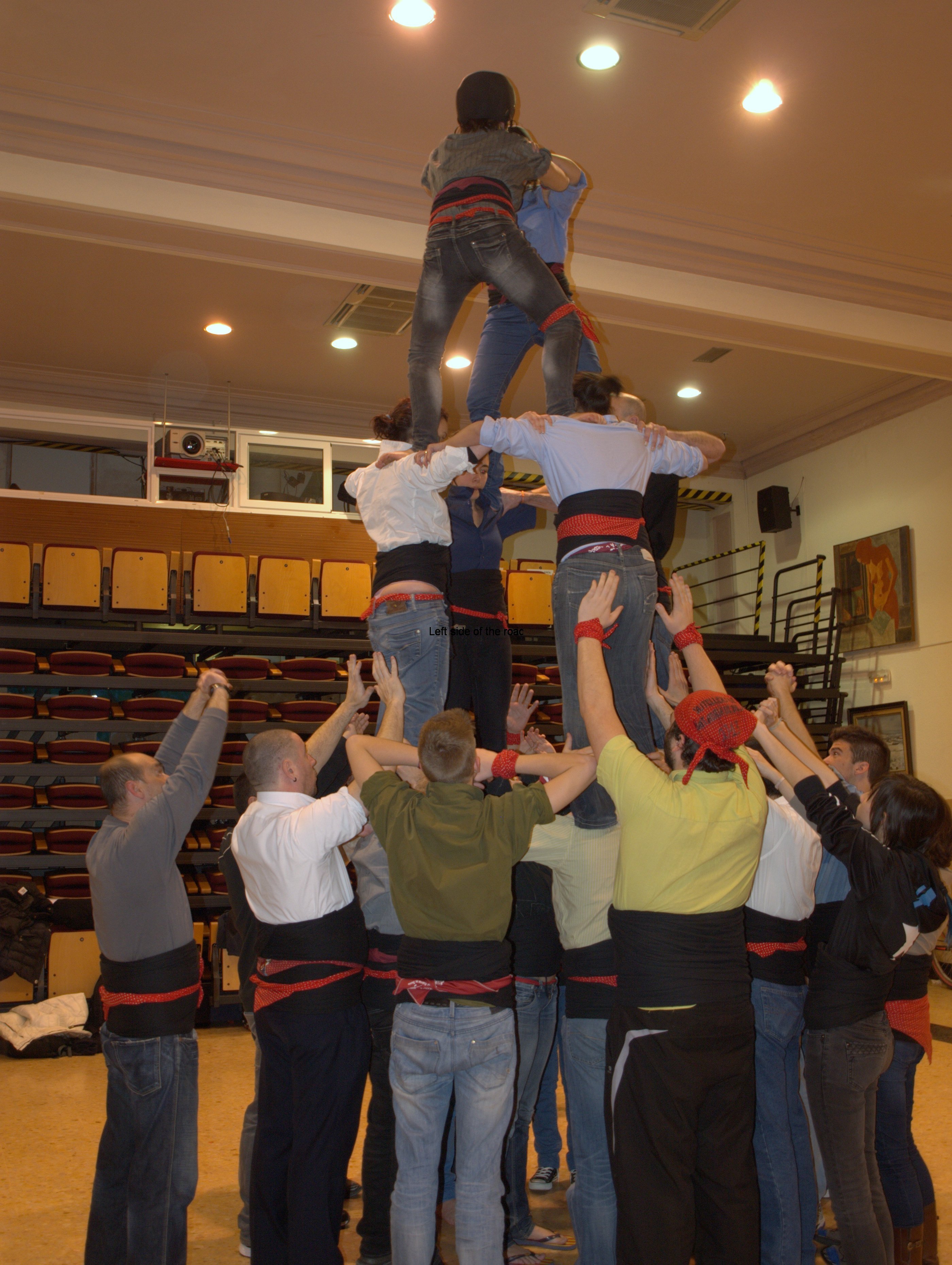 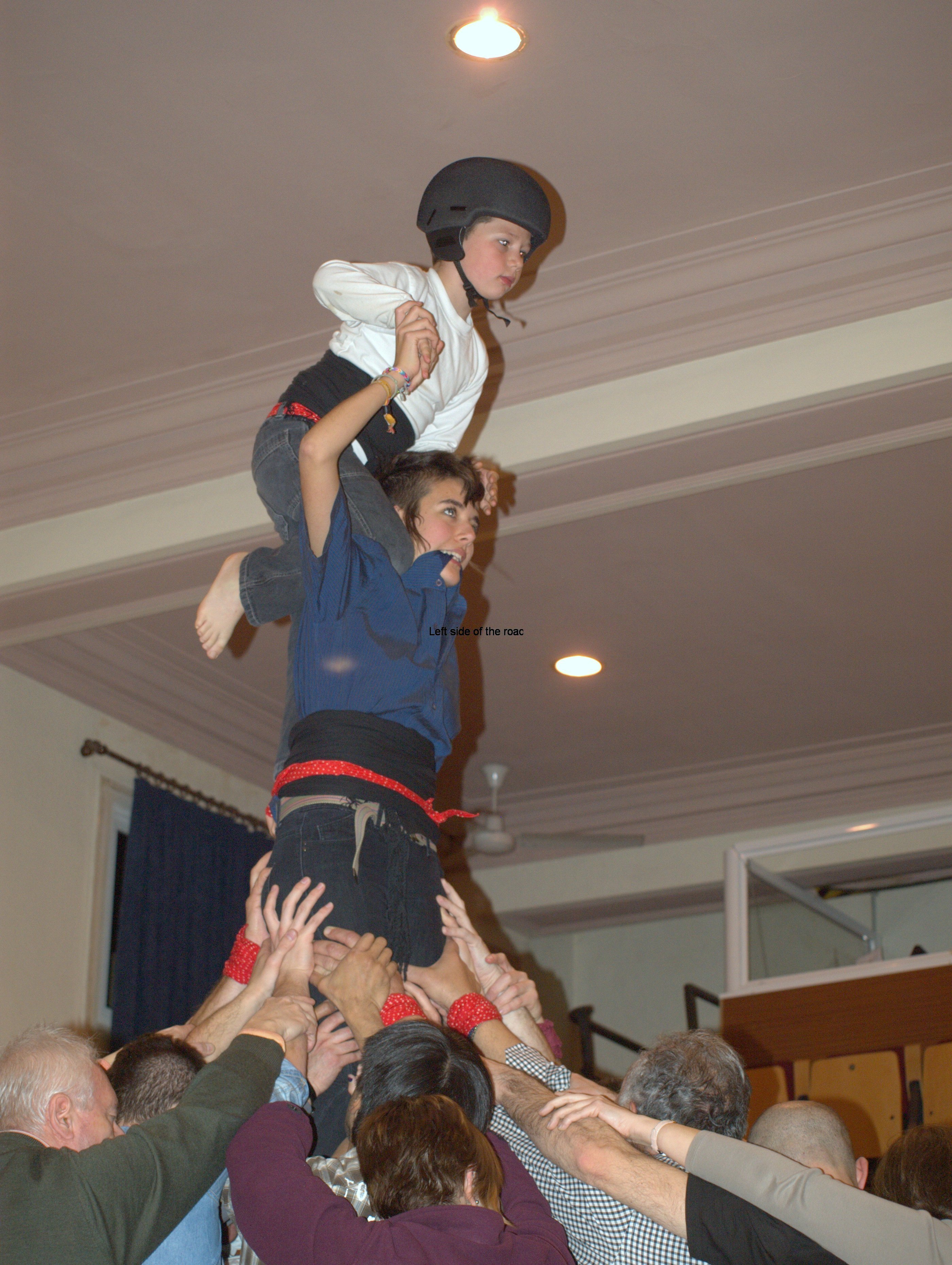 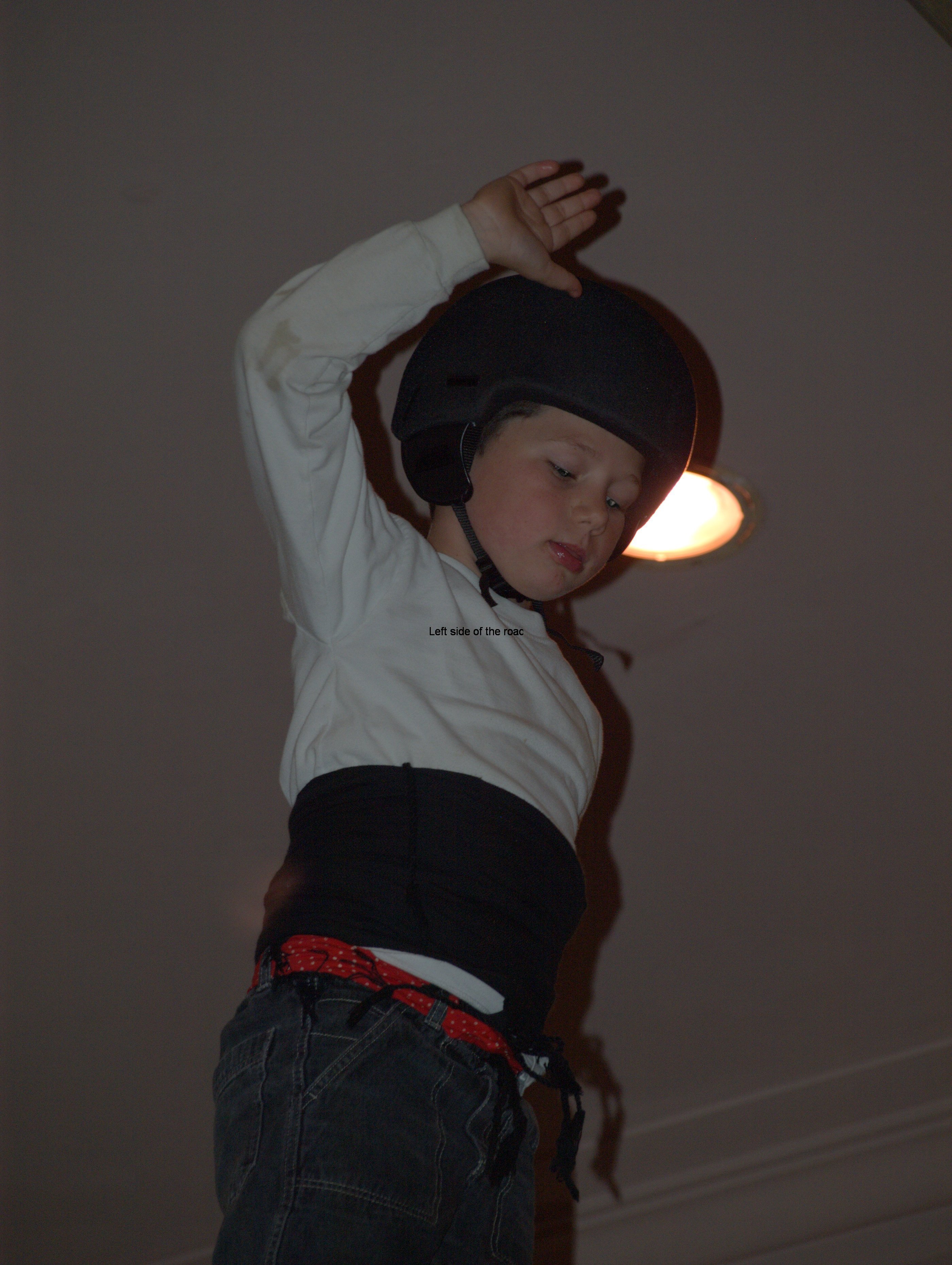 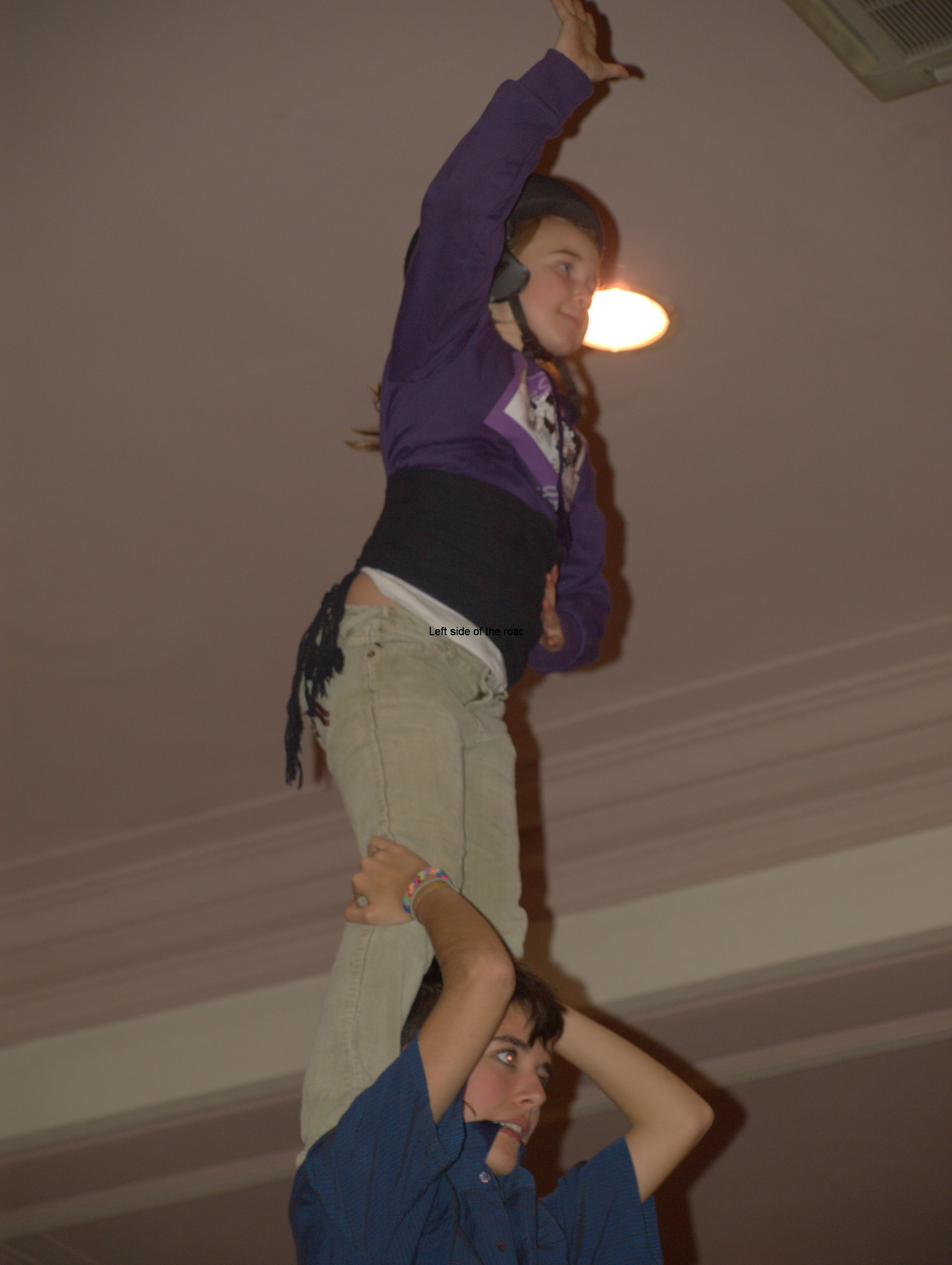 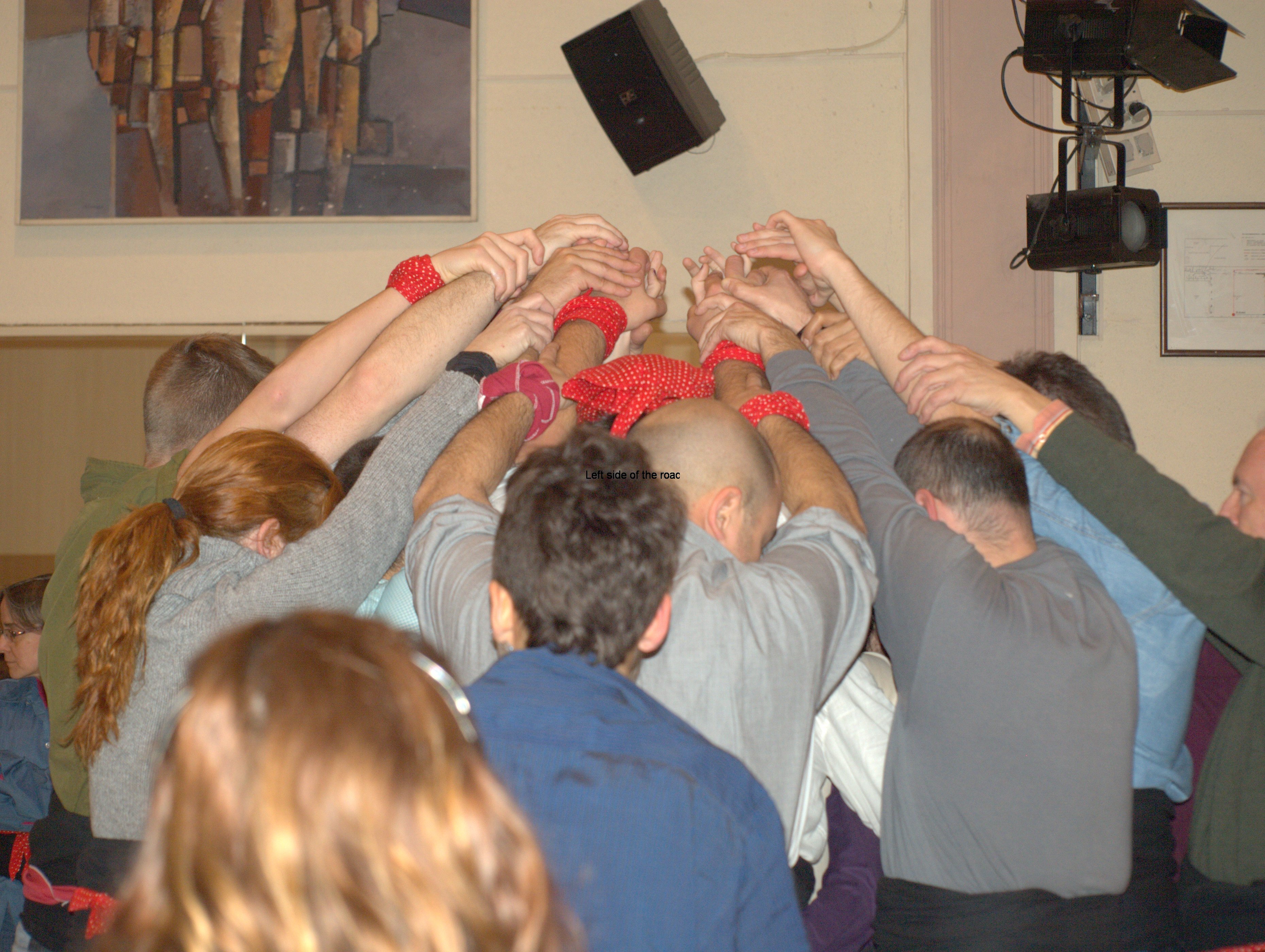 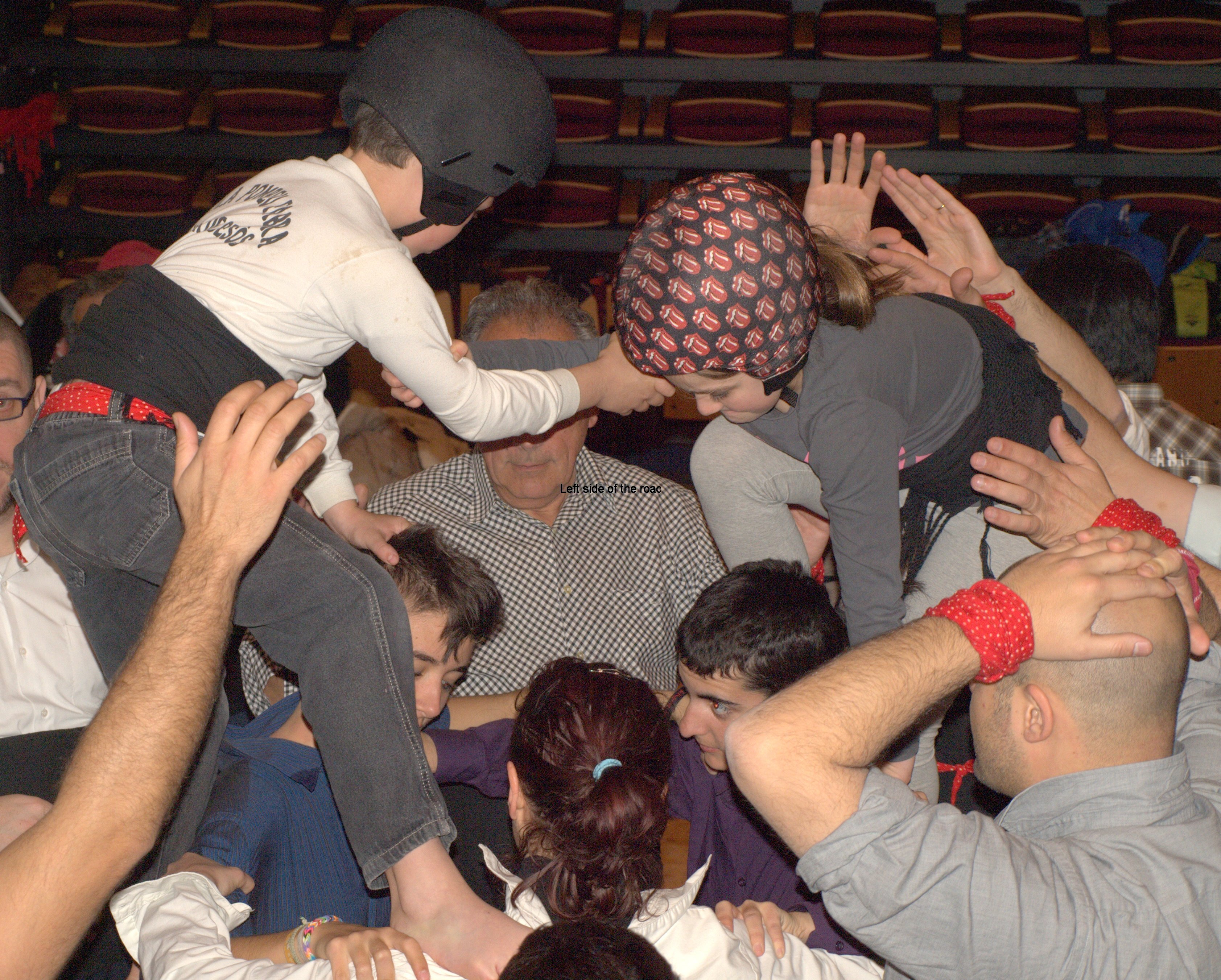