Leaving through the Porta di San Alessandro in the north-western section of the walls of Città Alta, and walking just a little beyond the bottom funicular station that takes you up to San Vigilio (the highest point to look down on Bergamo) you’ll arrive, on the right going downhill, at the narrow street of Via Borgo Canale. A couple of hundred metres down this road, on the left hand side, is the church of Santa Grata Inter Vites, home to the macabre paintings by the local painter Paulo Vincenzo Bonomini (1757-1839).

Along with the Romanesque church of San Michele al Pozzo Bianco, the Santa Grata is one of the places that I think is a must on any visited to the Città Alta of Bergamo. Not that there’s not a lot of interest around the Piazza Duomo but these two churches offer the opportunity to see something unusual and on a scale that’s a little more human. Cathedrals were constructed to make the individual feel small, the Romanesque frescoes and the macabre paintings in these locations were designed to make the individual think of his/her place in the world.

Macabre paintings date back to the 14th century but few examples from that time have survived. There’s speculation as to why this form of depiction of ‘life’ was chosen in the first place. Some argue that it was in response to the Black Death that wiped out anything from a third to a half of the population of Europe in the thirteen hundreds. Others argue it was to depict the constant struggle that humans have with Death, even though in that battle there will only be, and can only be, one winner.

Whatever the original reason for their becoming widespread during the medieval period Bonomini chose this style when he was commissioned to create a series of paintings in his local parish church in 1800. The fact that Europe was then embroiled in the biggest and most widespread war up to that time, with country after country falling to the Empire of the Corsican upstart and usurper of the gains of the French Revolution, might well have influenced his theme.

Bonomini couldn’t have been more of a local choice of artist for the commission. He was born in the same street at No 10 and was baptised in Santa Grata church on Christmas Day 1757 (Gaetano Donizetti, of bel canto opera fame, and the cellist Alfredo Piatti were also both born in Via Borgo Canale and baptised in this church).

There are six paintings in total, located behind the altar, and can be seen by the congregation between the pillars and the silverware.

One depicts a country couple, the man sitting down, with agricultural produce in their hands or on the ground, perhaps on their way to market.

Another is of a better dressed bourgeois couple simply out for a stroll. This follows the idea from many pre-Renaissance frescoes that Death had no respect for class.

One is of a drummer dressed in the uniform of the National Guard and another of a carpenter, walking to a job with the tools of his trade.

Of the last two one depicts a couple of priests (they were more than likely destined for Hell after their death) and what is considered a ‘self-portrait’ of Bonomini, an artist standing at an easel painting Death, with his wife on one side and an assistant on the other.

I like these paintings because they are different and not something I seen many times although there is a small collection, with the same idea of embracing everyone regardless of class or status, in the Adriano Bernareggi Diosesan Museum of Sacred Art.

These are, for me, the main reason for visiting this church but there are a few other points of interest. There’s what looks like a recently re-discovered fresco of a breast-feeding Madonna to the right of the altar.

On my last visit I was also directed to what I assume is the sacristy (the room where the priest prepares for the mass). This has a painted, mock wood ceiling and around the top of the walls are representations of the Virtues as well as one of Death castigating some poor individual. I’ve not been able to find out anything more of these paintings, i.e., by whom or when they were created. Next door was what can be only described as a store-room of church paraphernalia – statues of the Madonna, angels, crucifixes and other material that would be used on feast days or other special occasions.

Outside, to the left of the main entrance, fixed to the wall of the church is a war memorial. Originally placed there to commemorate the fallen in the First World War two additional plaques were added after 1945. What is interesting about these plaques is that the majority of those who didn’t return to the parish were killed or went missing on the Eastern Front, at the hands of the Soviet Red Army.

Location: in Via Borgo Canale, opposite the steps of San Gottardo.

Access: I was told, by one of the women who was preparing the flowers for a special service that coming weekend, that the church is open to visitors every Sunday from 08.30 to midday. The Tourist Information Office told me something else (which wasn’t even close to reality) and a local shop keeper gave another suggestion which didn’t seem to fit the facts either. However, if you’re not around on a Sunday see if anyone is moving around in the courtyard to the left of the church – there’s a very substantial iron grill at the street side. Begging might get you entrance. To the best of my knowledge they don’t charge. A book has recently been produced (€10) which provides more information about the church and its decoration (which I didn’t buy). 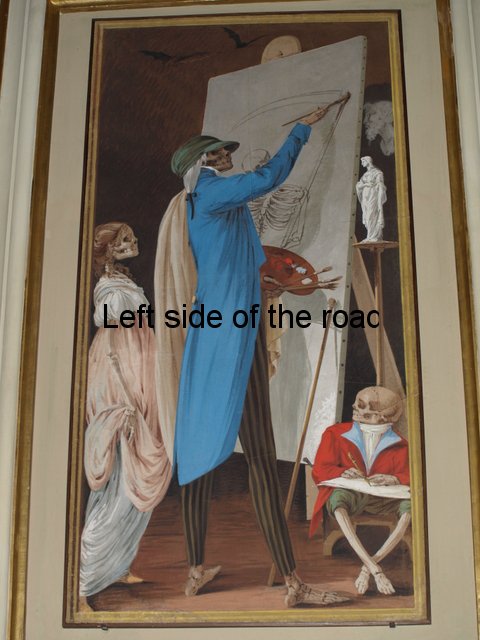 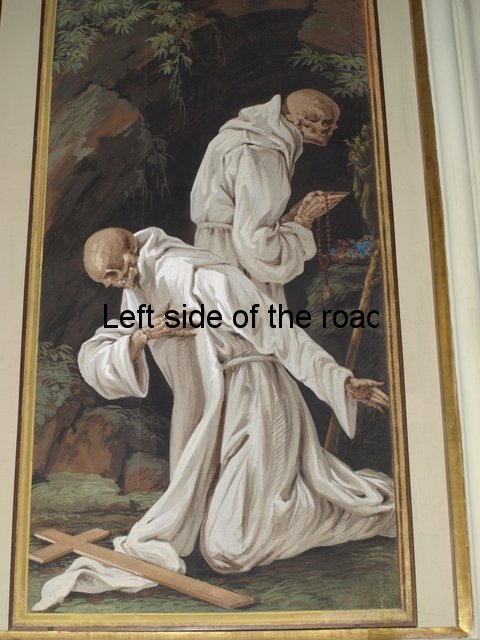 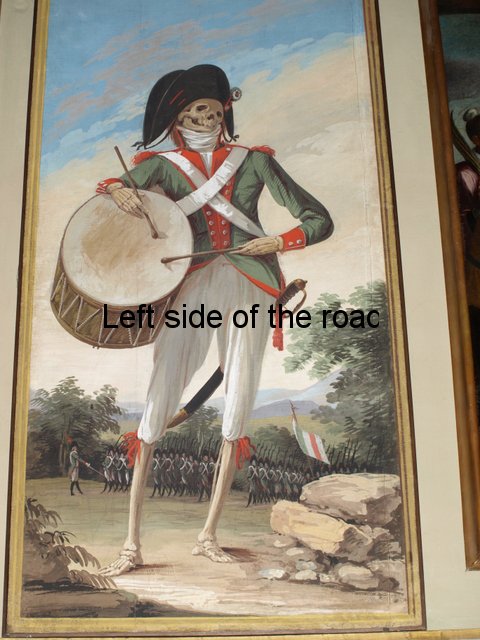 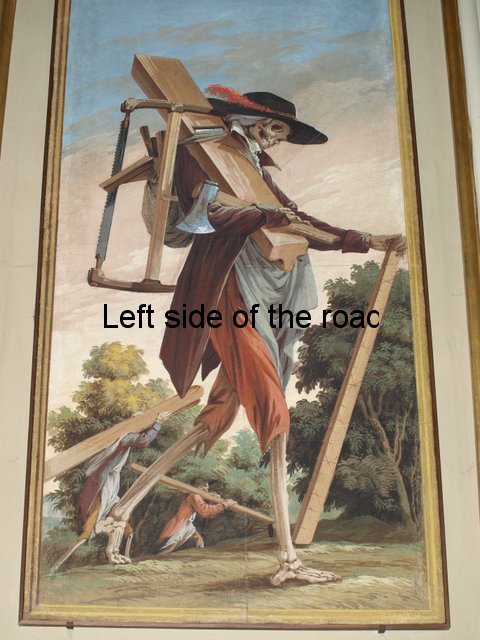 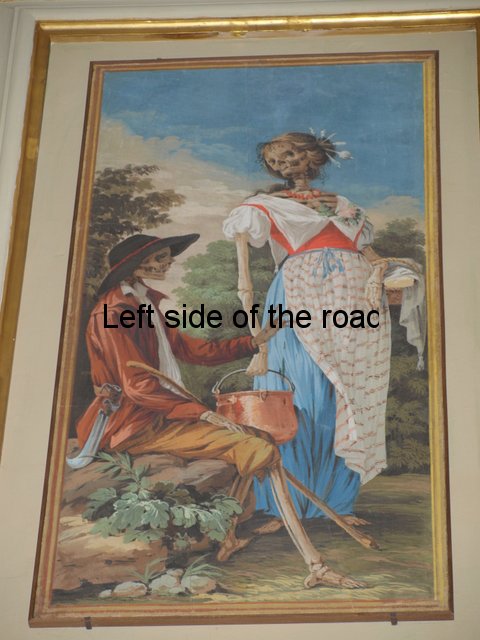 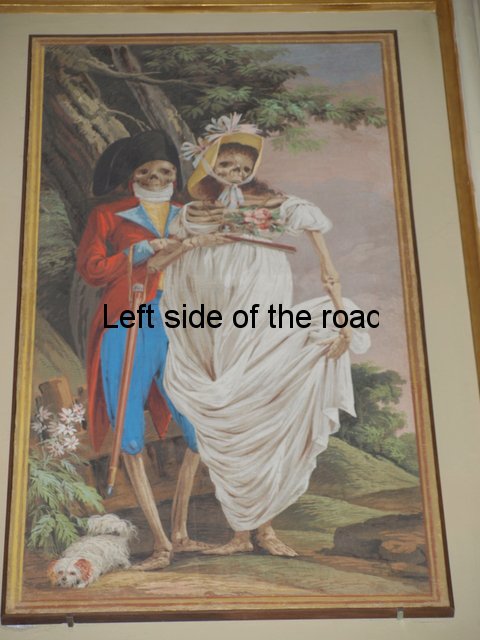 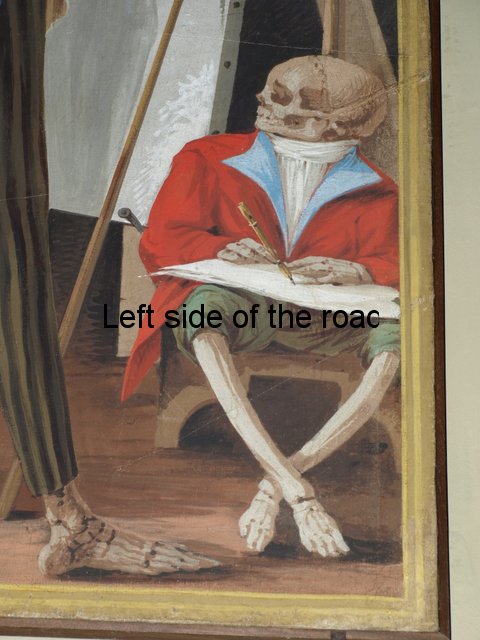 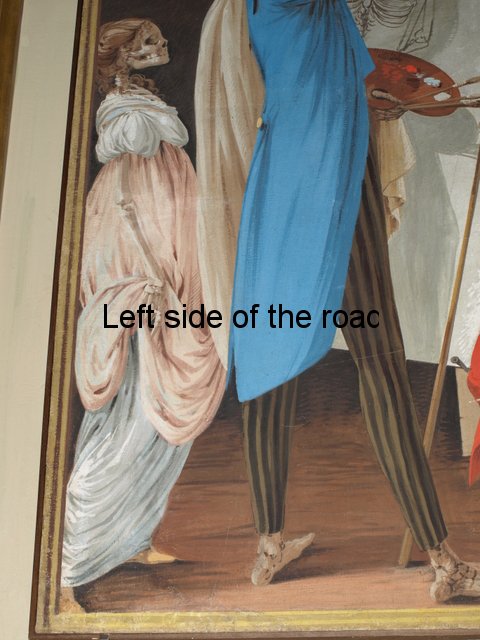 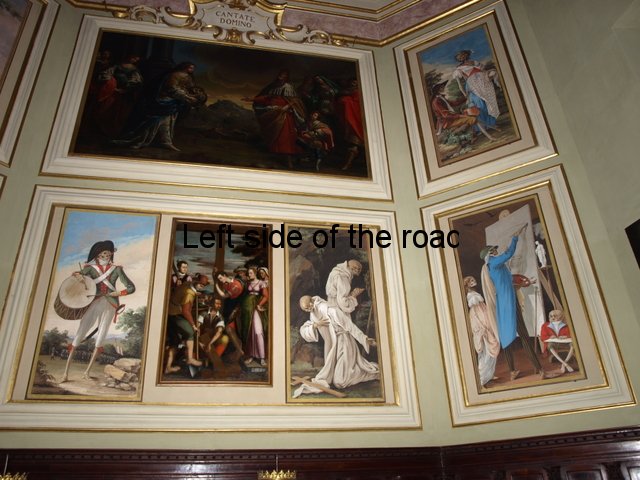 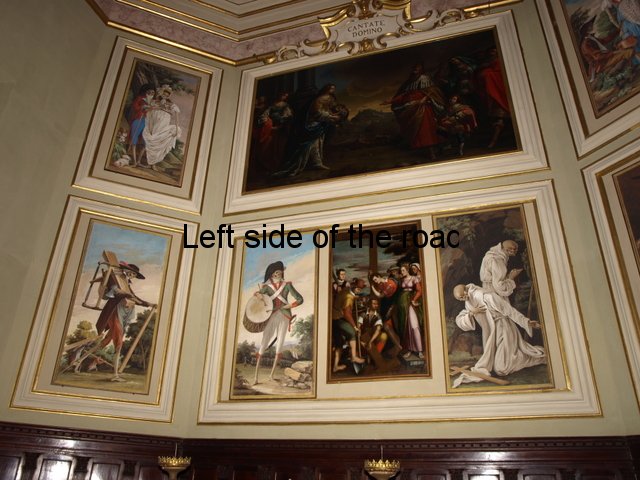 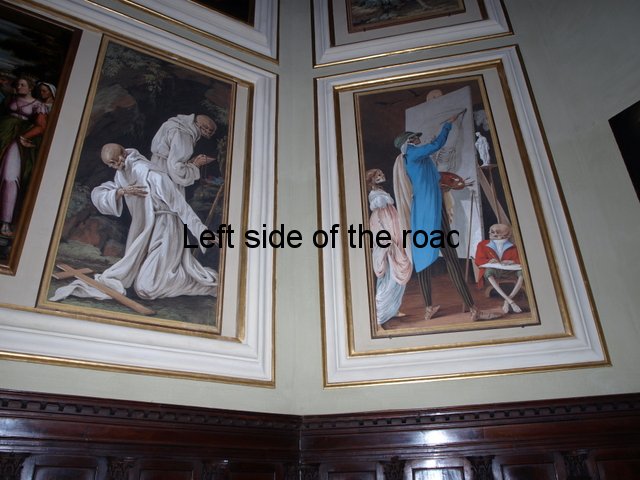 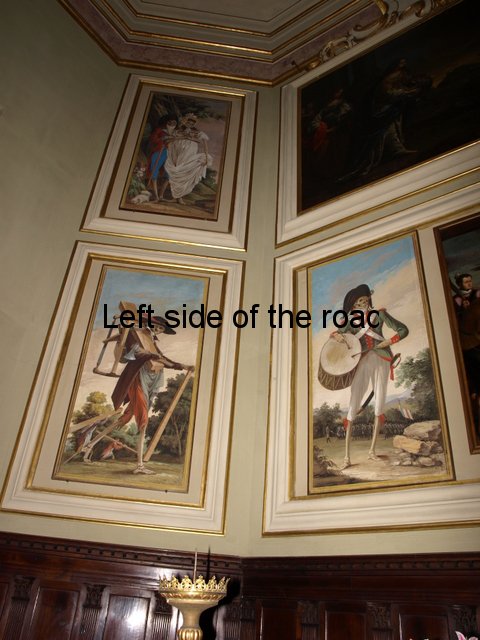 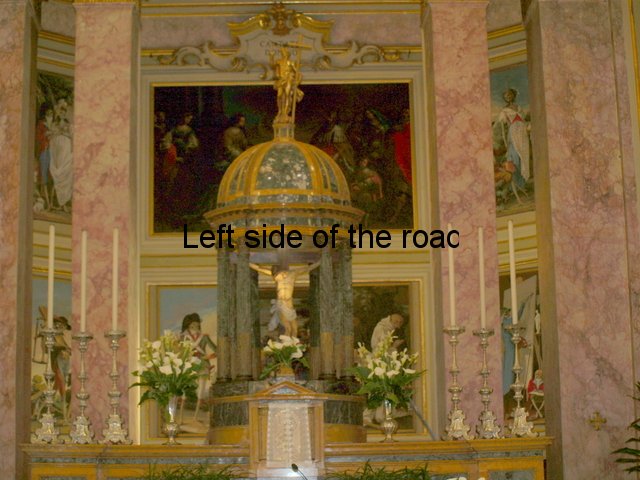 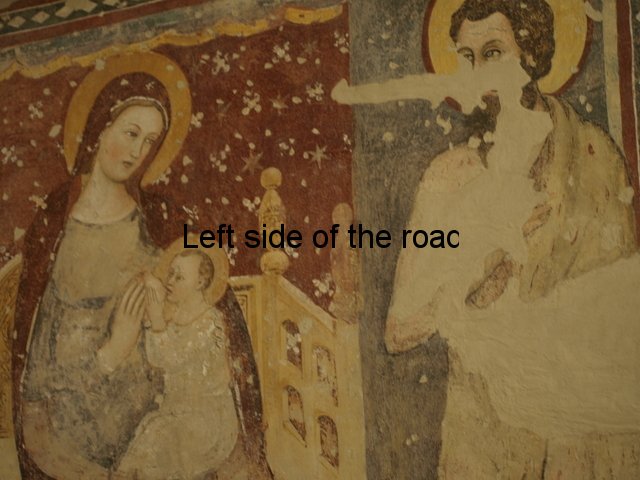 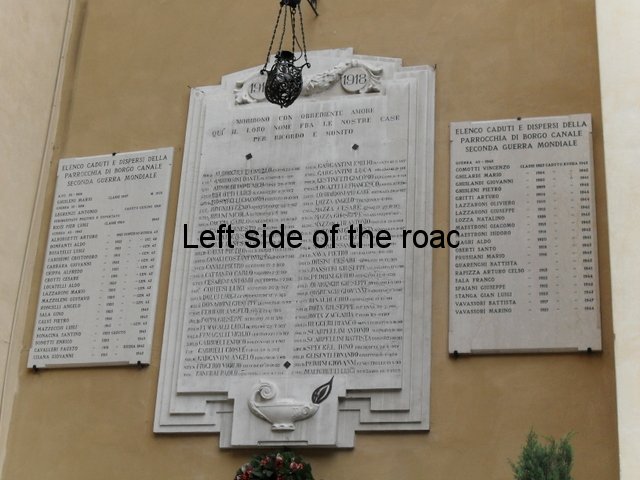 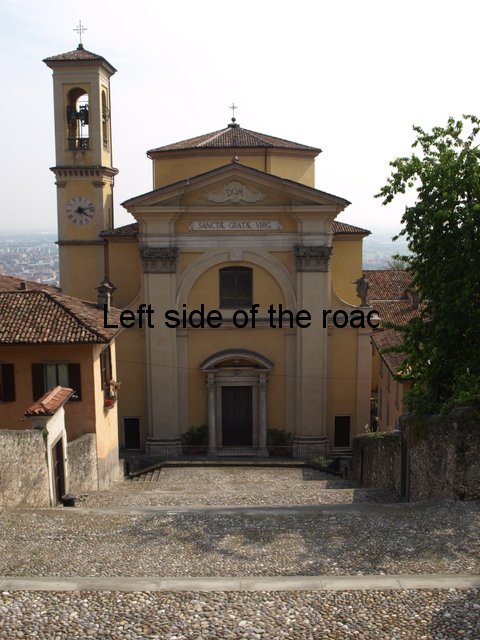 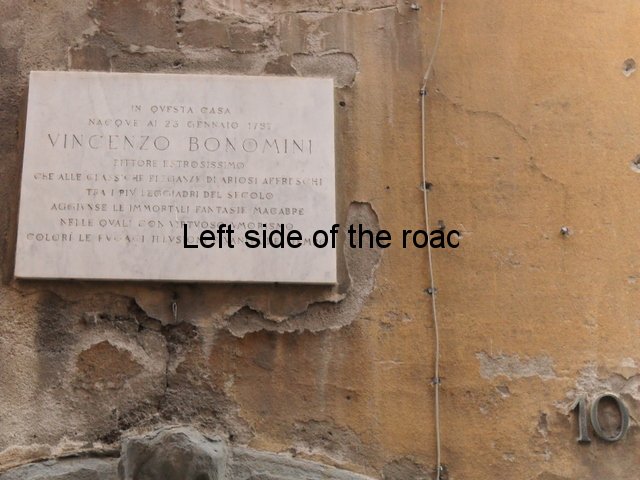 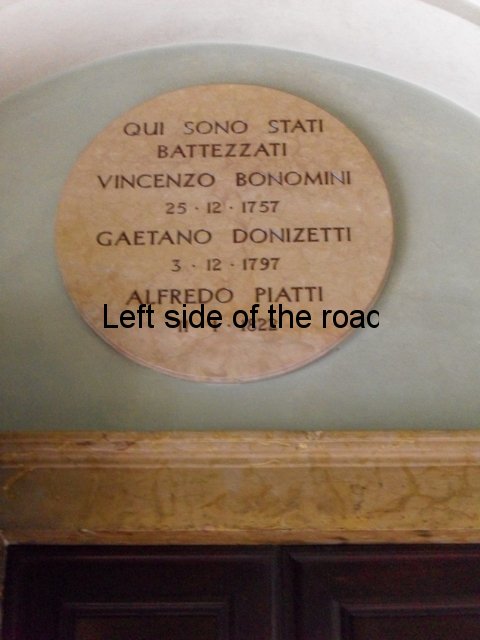