Cathedral of the Resurrection of Christ, Tirana – Main entrance

There doesn’t seem to be any money to improve the infrastructure in Albania but plenty for building churches and the new Resurrection of Christ Greek Orthodox Cathedral in Tirana has taken a big chunk of that budget.

This very modern structure, nothing like the traditional Orthodox churches, is to be found on Dëshmorët e 4 Shkurit, just before the junction with Myslym Shyri, a couple of minutes from Skënderbeu Square in the centre of Tirana. It was officially opened on 24th June 2012 and cost ‘millions of Euros’.

In place of looking for local, Albanian architects the Orthodox Church decided to go to architects based in New York, Papadatos Partnership LLP. They have established themselves as specialists in building Greek Orthodox churches in the United States. The founder of this partnership is an Archon of the Ecumenical Patriarchate and it is through the influence of this lay organisation that the money was probably found to pay for the cathedral.

The head of the Albanian Greek Orthodox, Archbishop Anastasios, is quoted as saying, in July 2003, ‘I was asked to revive the Church without any financial support, in a destitute country undergoing a wrenching political transformation.’ And in the last 10 years or so 83 new churches have been rebuilt and 40, that were in ruin, repaired.

One of the strange things that you notice when travelling around Albania is that although there are a lot of new churches they never seem to have anyone in them. For example I went to see what the congregation was like at the time of the six o’clock evening mass in a couple of Catholic churches in Shkodër – the Franciscan Church was deserted and the Cathedral was locked up. And this has been repeated virtually everywhere I’ve been.

Almost like a mantra anti-communists get indignant when talking about the concrete bunkers that were built throughout the country during the socialist period. Yes, these would have diverted resources away from other projects but there is no denying the fact that the country was being threatened from all sides and the construction of these bunkers was a matter of national defence. It was said that the resources could have been spent on roads and housing but if that was true then what are we to say about the untold billions that get spent in capitalist Britain, the USA and other European countries on extremely expensive armaments. Aren’t there better ways of spending this money than on the new Trident submarine system, for example, being proposed in the UK? I don’t mind criticism but can’t we have a little bit of consistency? (Of course not!)

So if bunkers are no longer being built in Albania why aren’t resources being used to improve the infrastructure rather than the building of churches and mosques by all the three main religions, Islam, Catholic and Orthodox Christian? And I’m sure that fundamentalist protestants are there somewhere – they seem to try to get in everywhere they can.

Cathedral of the Resurrection of Christ, Tirana – Main entrance at night

But back to the new Resurrection of Christ Greek Orthodox Cathedral. Some facts. It’s the third largest Orthodox church in Europe and took 8 years to construct.

It’s an interesting building and I can see uses for it after the next atheist campaign in Albania. But for a cathedral it’s relatively small on the inside. There are supposed to be a couple of levels below ground, where there’s a concert room, but it wouldn’t take a lot to fill the main church – quite useful if not many people come.

Cathedral of the Resurrection of Christ, Tirana – Christ painting on dome

The interior is ornate in its own way at the moment but according to the computer generated pictures I’ve seen of the architect’s intentions there should be a great deal more decoration on the walls. On the four corners of the square dome supporting arches images of the four evangelists were planned as well as covering much of the interior walls with paintings or mosaics but, at least for the moment, there are only bare walls. But they’ve managed to complete the image of Christ on the dome. All in all a little bit more luxurious than the Mother of Christ church on top of the hill in Dhermi.

Cathedral of the Resurrection of Christ, Tirana – View from main entrance

One of the more interesting aspects of the structure is the clock tower which is completely separate from the main building. This is in the design of four pillars which converge slightly towards the top where they cradle the clock, which is lit up at night.

Cathedral of the Resurrection of Christ, Tirana – Clock Tower at night

When I went there it had rained a little bit earlier in the day and the marble on the steps and the platform before the main entrance were like a skating rink so those in a hurry in the wrong weather conditions could end up meeting their maker sooner than expected.

At the corner of Deshmoret e 4 Shkutit and Myslym Shyri, west of the main concentration of government buildings. 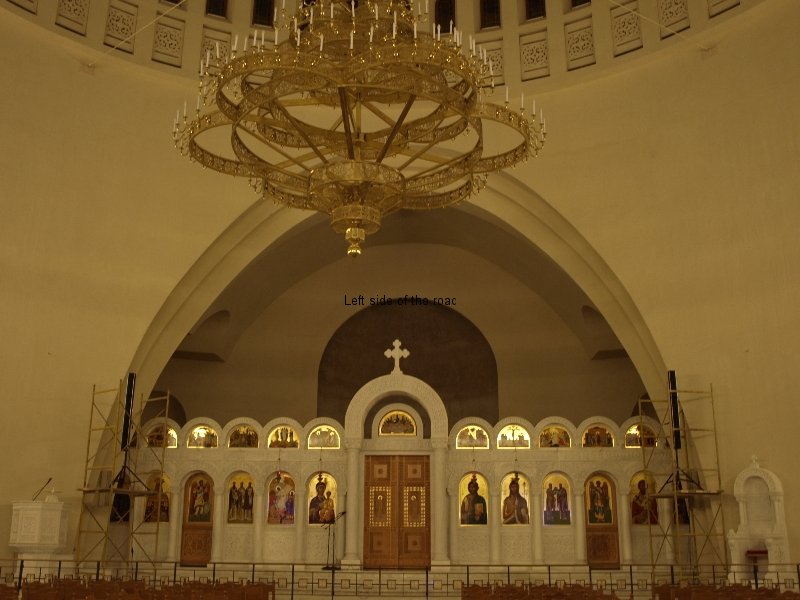 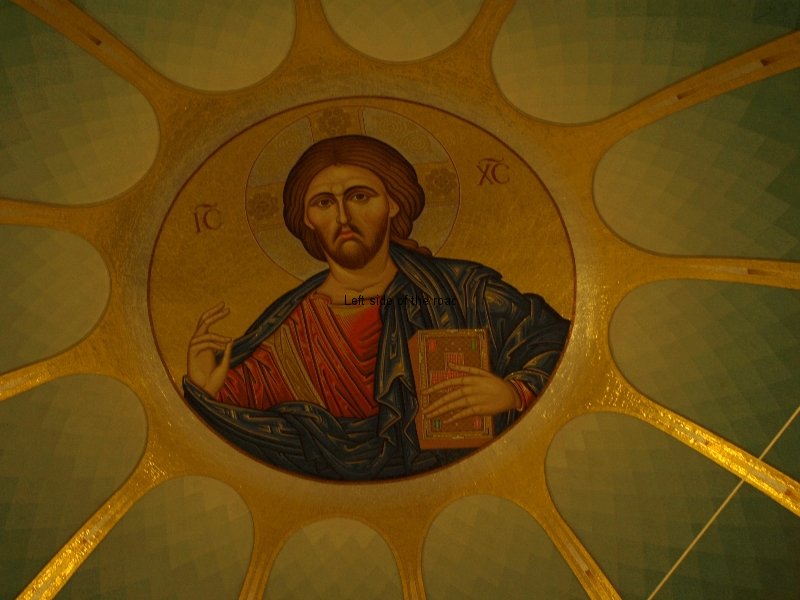 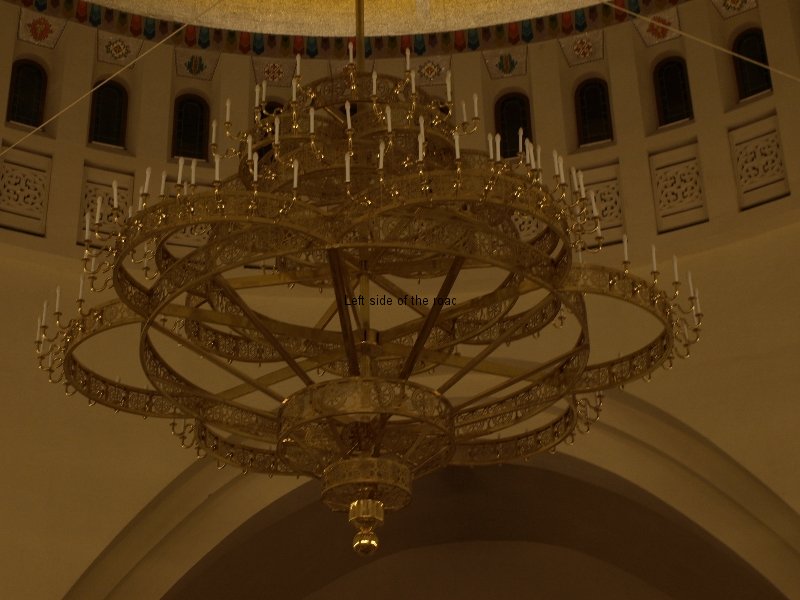 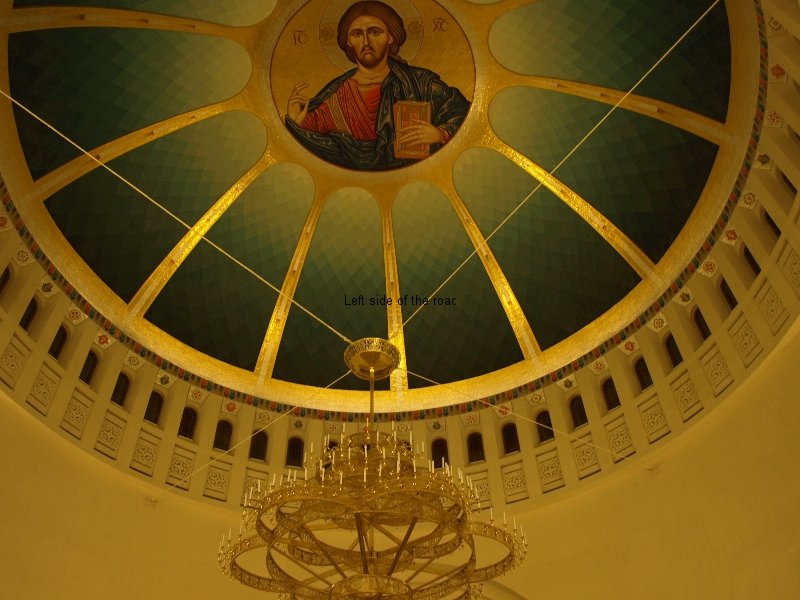 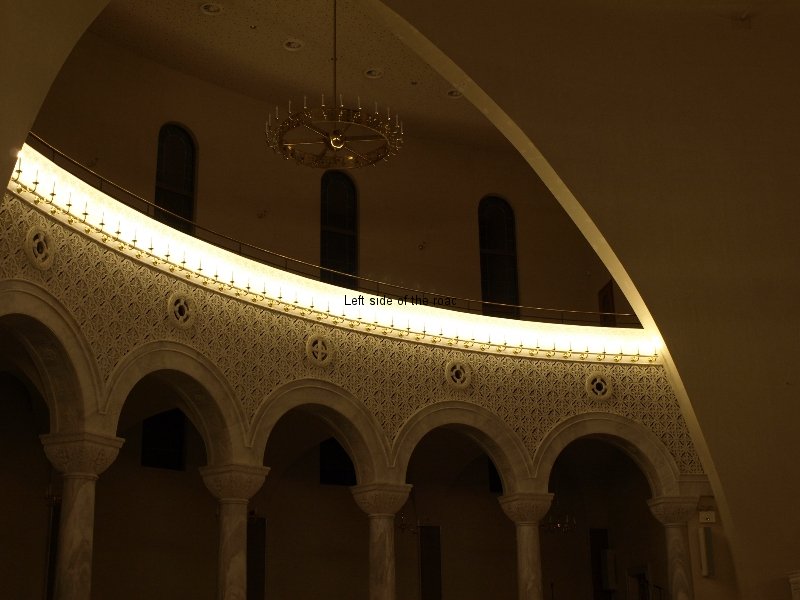 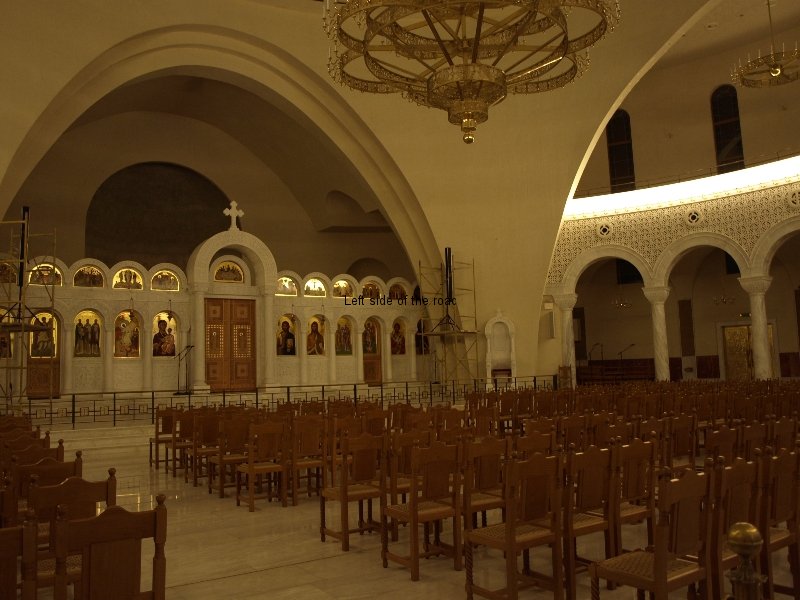 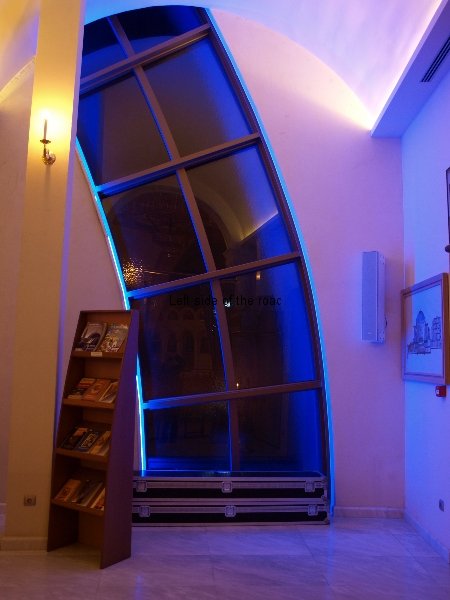 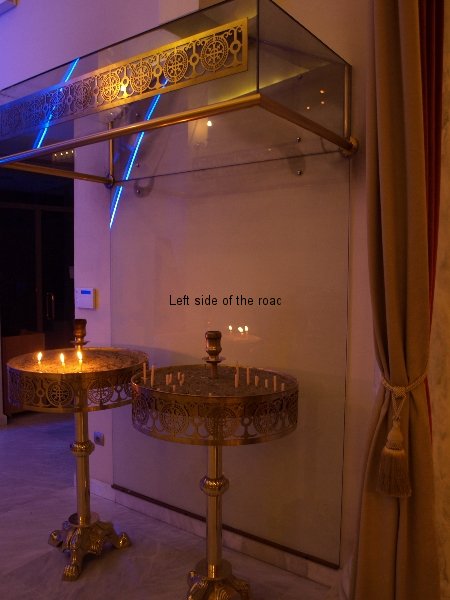 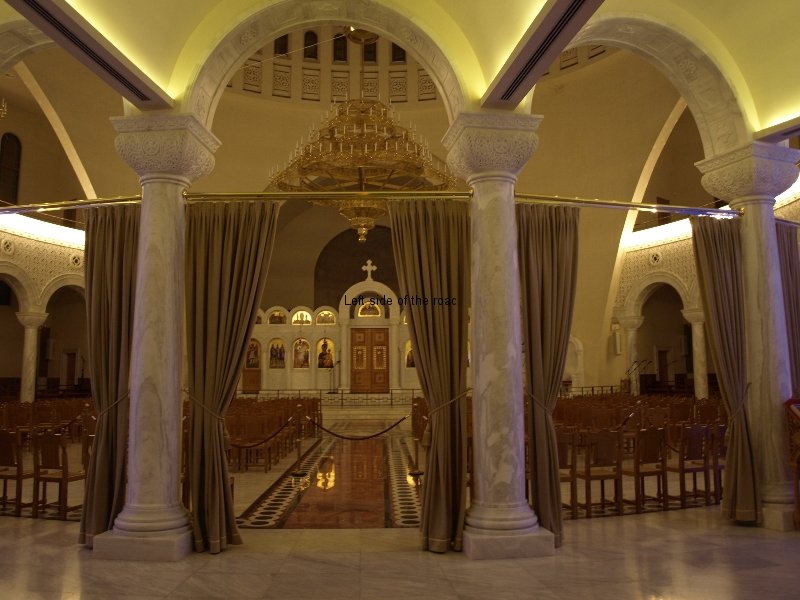 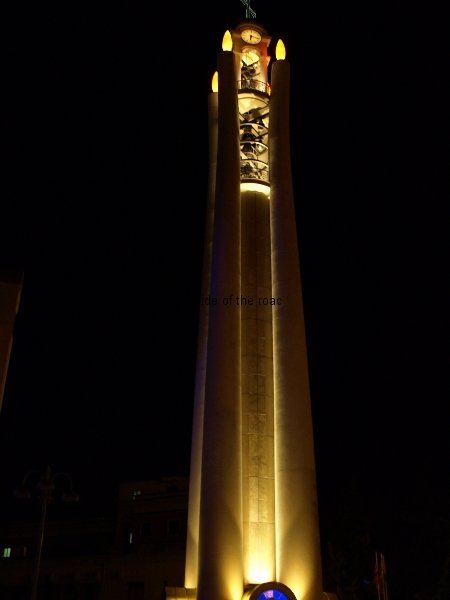 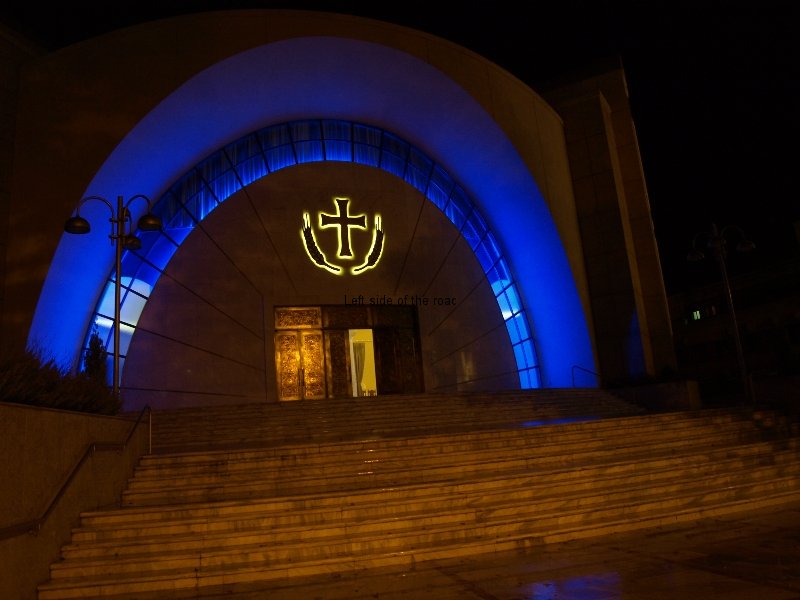 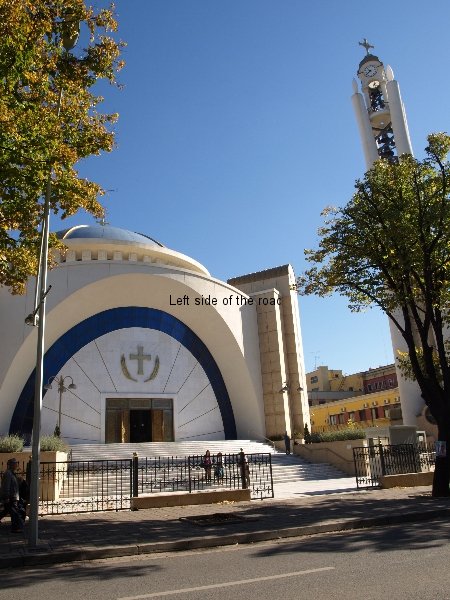 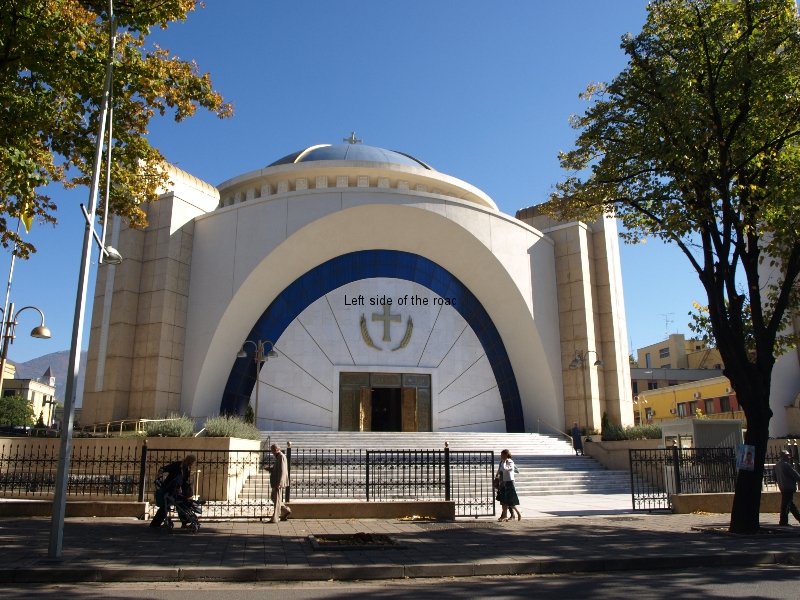