The statue at the Pogradec Martyrs’ Cemetery is of a group of three partisans – one woman and two men. The demonstration of unity is shown as they are, literally, shoulder to shoulder and the three figures, which are probably 1 1/2 times life size, all stand on the same unifying base. The three individuals have all been painted (relatively recently) in gold paint, including the statues base. The group stands on a small rectangular base which takes it, perhaps, half a metre above the surrounding ground level. This base is made of concrete faced with marble slabs, the two layers of white separated by a much thinner, red line. So it’s a clean and tidy shape and design.

On the left, as you look at the sculpture is the woman, a female partisan. She’s in a full partisan uniform, with jacket and trousers. She is standing at ease, as are all the characters, with her legs separated at shoulder width.

She’s wearing a cap, on the front of which is a red star. The star has been painted red. (The stars on the headgear of the trio is the only colour on the statue apart from the gold.) Her hair hangs down, from underneath the cap, at just above shoulder length, at both sides of her head. There’s a scarf, tied with a knot at the front, around her neck. This also would have been red.

An ammunition belt runs from over her right shoulder, across her chest to her waist on the left-hand side. In this belt there are eight cartridge pouches. On her left hip is a holster, buttoned up, so all you see is the butt of the pistol. Her right hand is holding the barrel of a rifle, the stock of which is on the ground, next to and touching her right foot. However, the barrel above her hand is missing. Her left arm goes behind a flagpole and this is pressed into the crook of her arm with her fingers gripping the pole, more or less, at shoulder height. She’s wearing sturdy boots.

If you look at the back of the statue you will find that the flag is hanging down but in such a way that it envelops her back, as if the wind (coming from the right) was blowing it against her body.

The central figure of the group is a male partisan, in full uniform, from head to toe. He’s wearing a cap with a red star on the front and also has what would have been a red scarf around his neck – both symbols of a Communist. He has the sleeves of his shirt rolled up to the elbow exposing his forearms. He also sports the short-legged trousers which end at the knee with his lower legs being covered with thick, long socks. Across his chest are two leather straps which cross each other in the centre of his body. The one that goes down towards his left hip holds the holster of his pistol while the one to the right holds what looks to be a scabbard for a bayonet. The pistol is further attached to his body by a lanyard that is slung around his neck the other end being attached to a ring on the butt of his pistol. Around his waist he wears an ammunition belt, every niche holding a bullet.

As is the female to his right he is standing at ease and looking directly in front of him. His left arm hangs down, fully extended and his left fist is clenched, normally depicting determination. His right arm is fully extended above his head and he grips the barrel of his rifle close to the end. (As with all the rifles in this statue the actual end of the barrel has been sawn off by some opportunistic metal thief in the 1990s. It seems that the ends of the bronze barrels from a number of lapidars were targets of such vandalism not only here in the Pogradec cemetery but also in other lapidars such as the Five heroes of Vig in Shkoder.) His rifle is exactly in line with the pole of the flag which the female partisan is holding and originally the barrel would have reached the same level as the ferule on the end of the standard pole. To add to historical accuracy the strap of his rifle hangs down, brushing against his bare arm.

The third and final member of the group represents the members of the partisan army who came from the countryside. We can tell this from his dress, specifically his headwear, his shirt and jacket, which looks like a heavy sheepskin. It is a uniform but with a heavy influence from the style of clothing worn by those who were from the mountain areas of the country. He also looks slightly older than his two companions. This again a common trope with Albanian lapidars in that the Partisan army was made up of all sections of the Albanian population, male and female, the old and the young (see, for example, Liri Gero, the young teenager from Fier who was tortured to death by the Nazis.)

His left hand holds the strap of his rifle just above waist height and the rifle itself is resting on his back, its truncated barrel cut off just above his shoulder. His right hand rests on the left shoulder of the central male figure, this being a sign of solidarity and support as well as friendship. Around his waist is an ammunition belt, again each of the compartments full to the maximum of five bullets – ammunition was much more valuable during the Second World War, not as in current conflicts where rounds are used by the thousand on a daily basis. On his right hip a British made mills bomb (grenade) hangs from his belt.

The statue group was painted gold some years ago. It’s unlikely they would have been that colour originally but it shows that the local government cares for the lapidar even though their definition of ‘care’ might not be quite what would be considered so in the more formal conservation of monuments community. In the repainting process the stars on the caps of the two figures on the left have been painted red. This is not always the case when a statue has been painted/repainted. Often there is a move to still commemorate those who died for National Liberation against the Italian and then the German fascists but there’s a refusal to pay homage to the fact that that liberation struggle was led by the Communist Party of Albania.

At almost all of the martyrs’ cemeteries throughout Albania there was an attached museum, some bigger than others. The building behind the sculptural group would have been such a museum. When I first had the opportunity to see this grouping the only thing on the facade facing the cemetery and the road was the brightly painted red star, as can be seen in some of the images in the slideshow. However, some time in the late teens the decision must have been taken to re-open the museum and the word now appears on the facade. Unfortunately, the time I saw this was when I was passing through Pogradec on a Sunday so the museum wasn’t open. If further information becomes available it will be added here in the future.

The sculptor was Todi Mato but I don’t have an exact date of its inauguration.

Alongside the road on the exit of town in the direction of Korca (at the junction of Rruga Gani Butka and Rruga e Dëshmorëve). 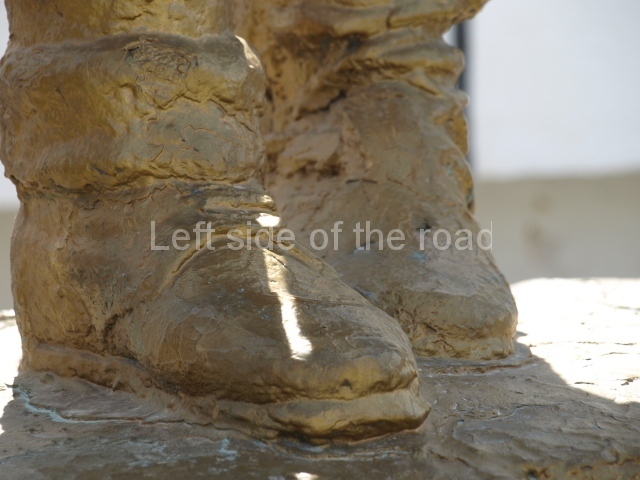 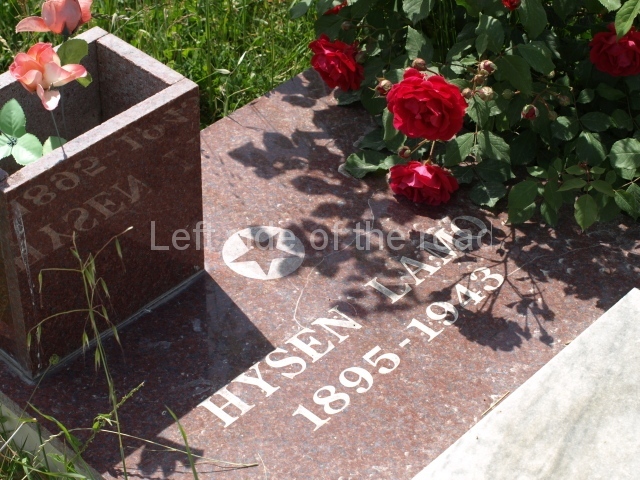 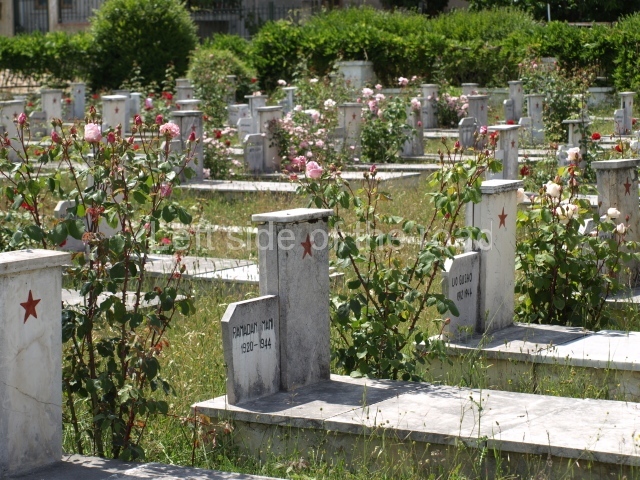 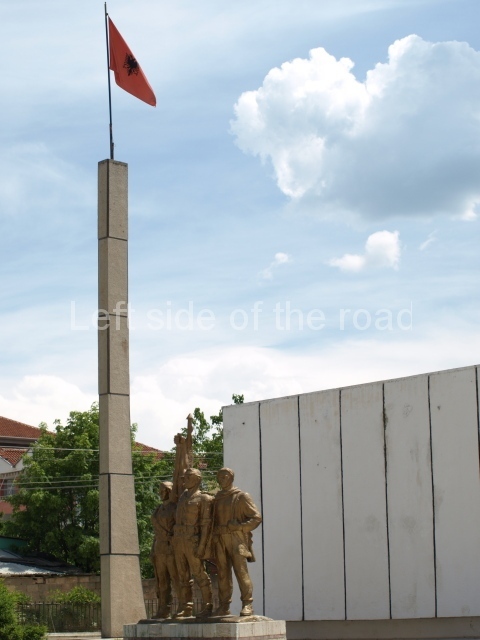 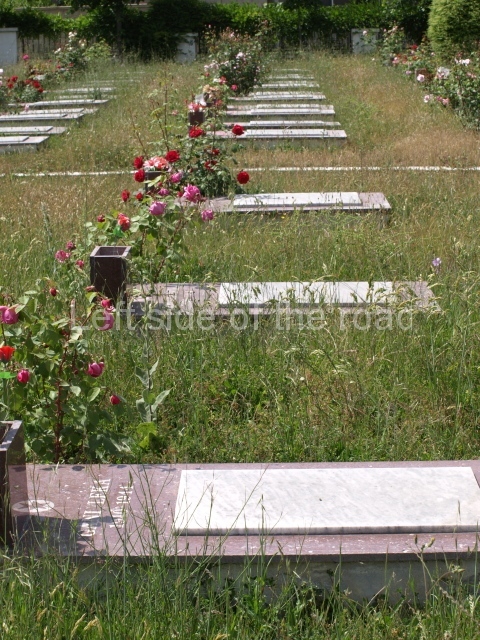 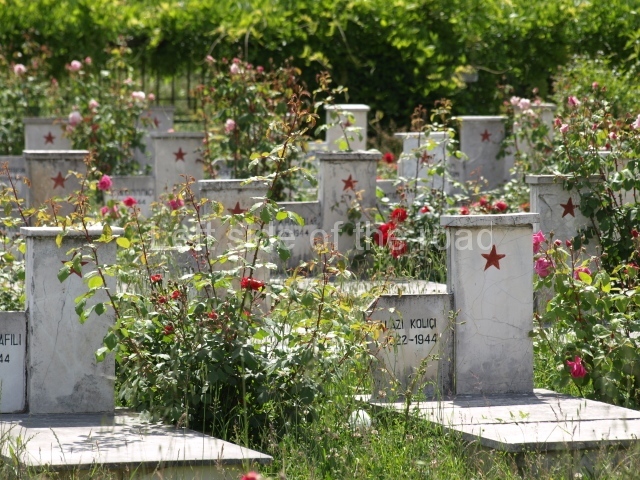 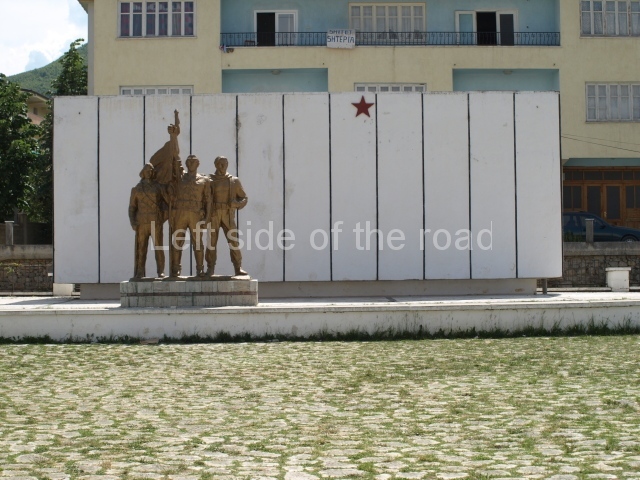 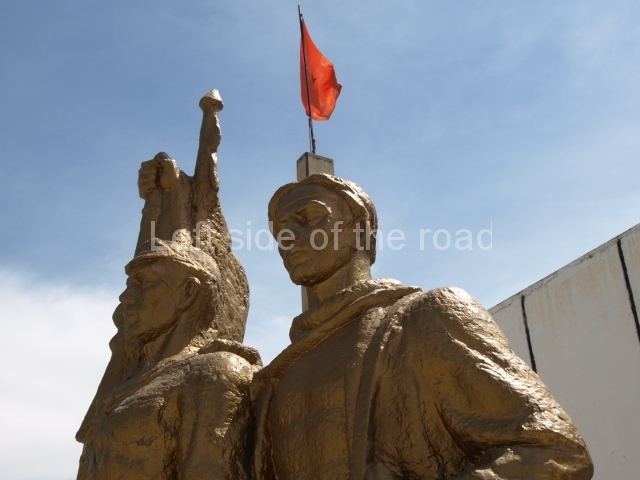 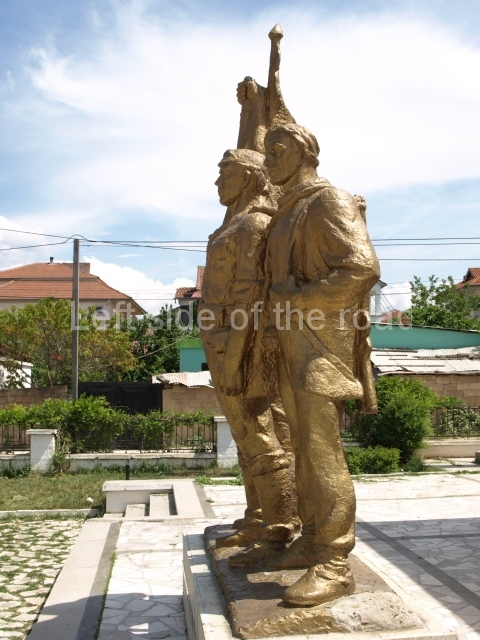 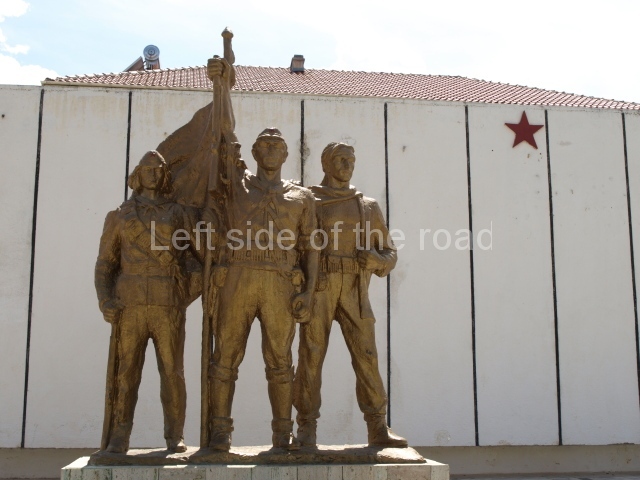 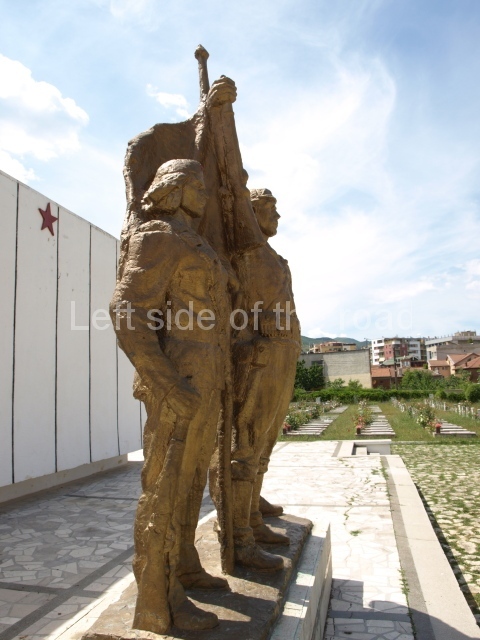 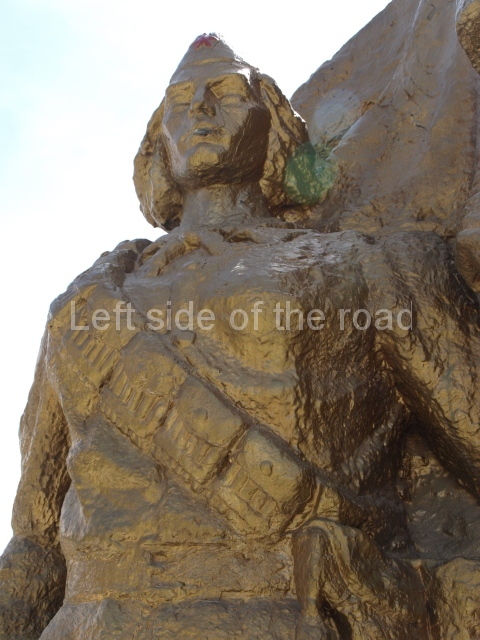 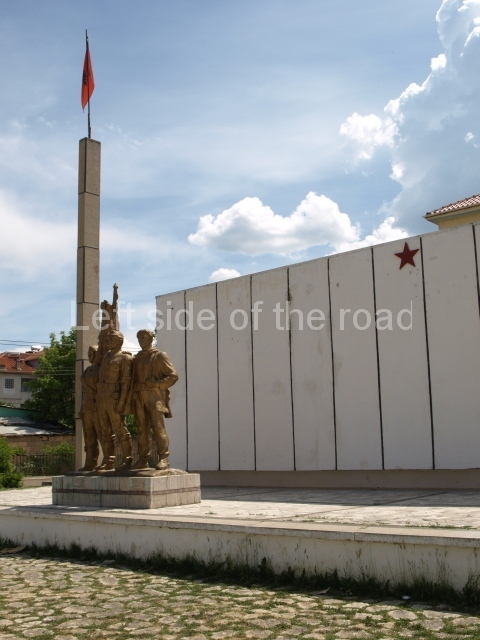 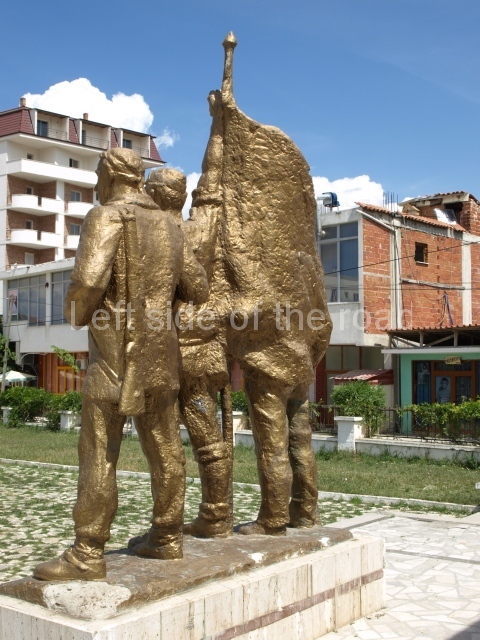 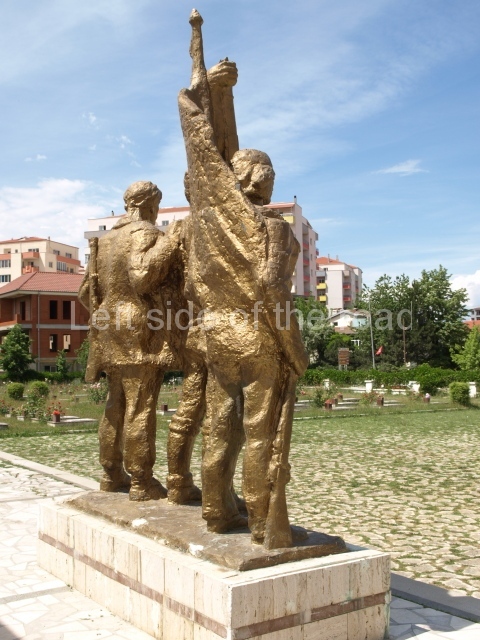 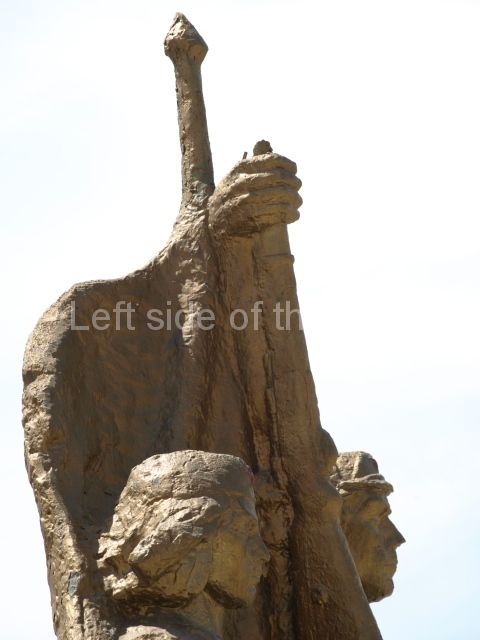 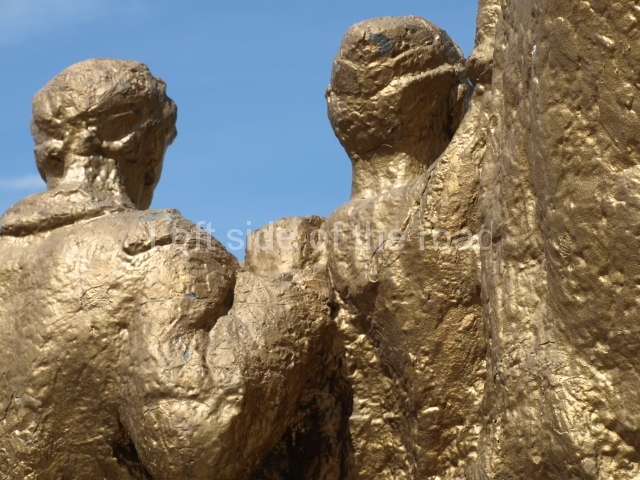 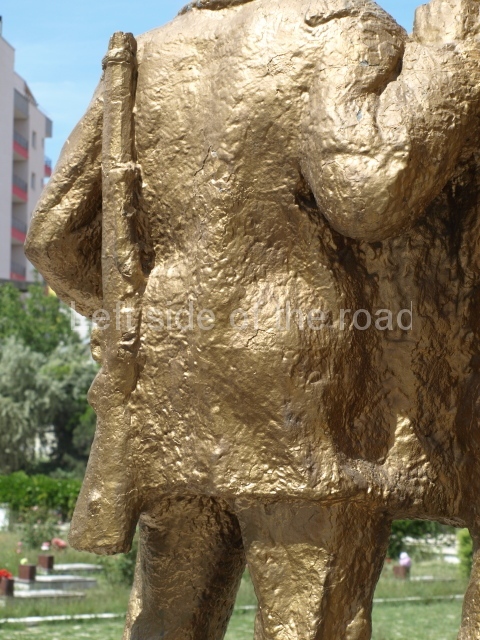 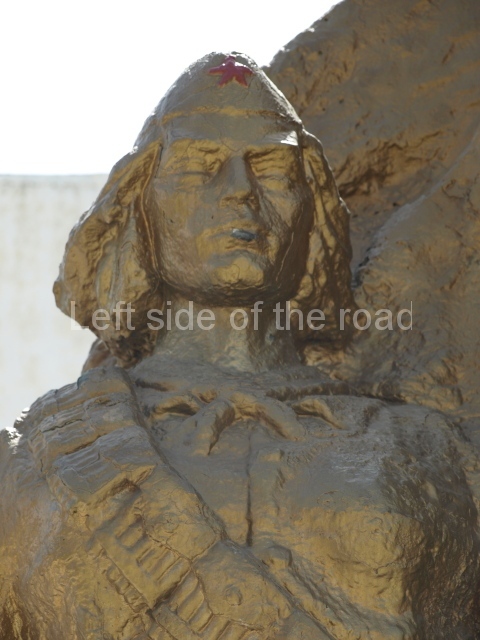 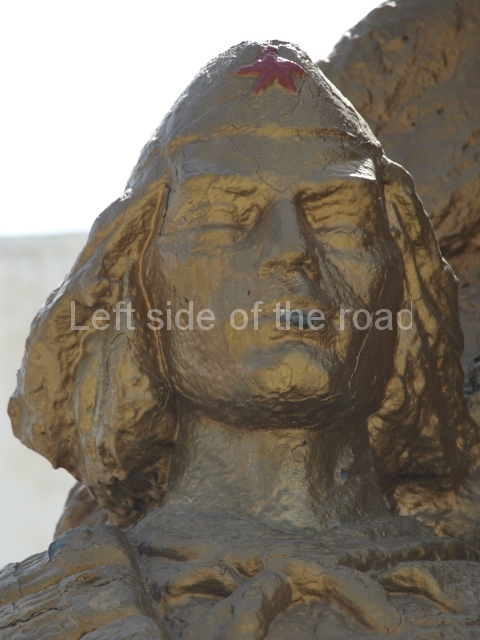 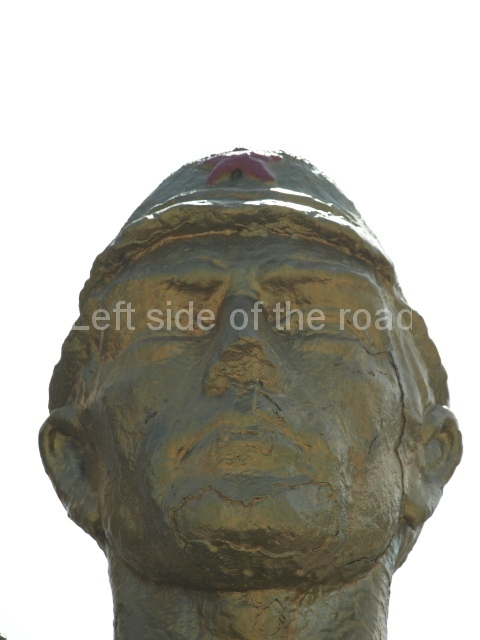 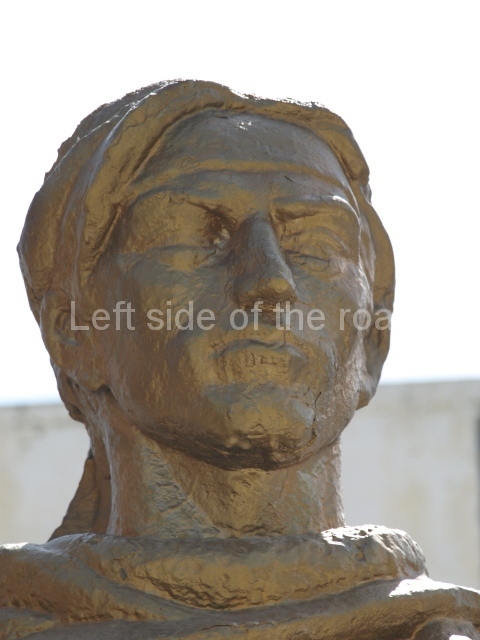 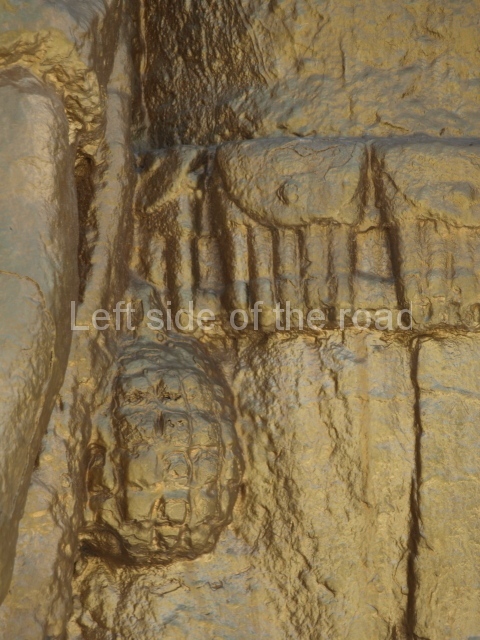 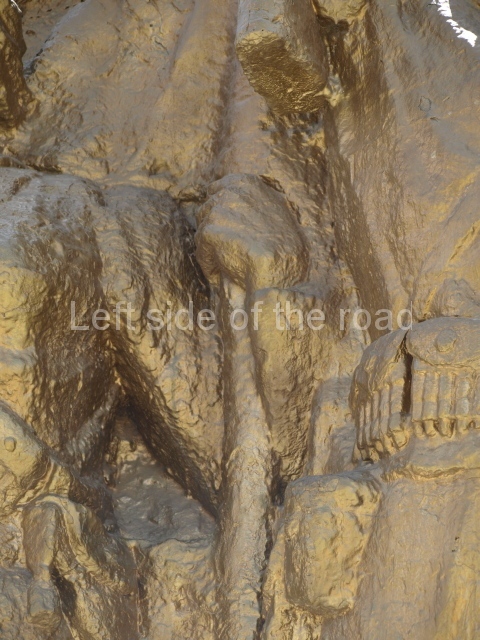 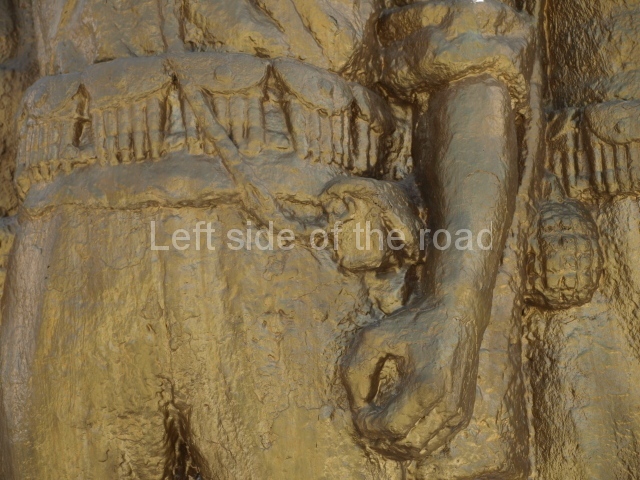 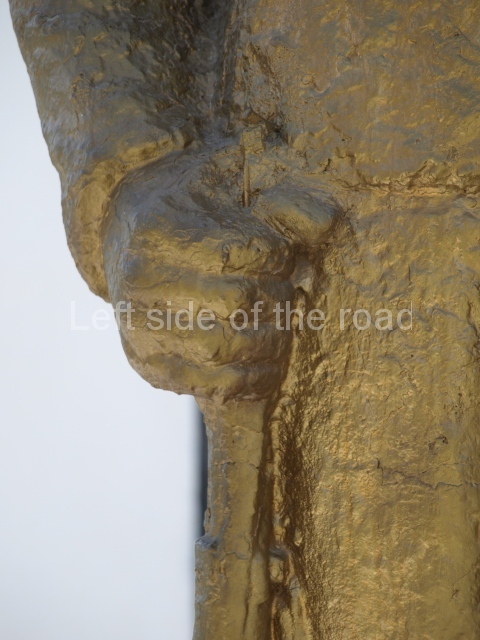 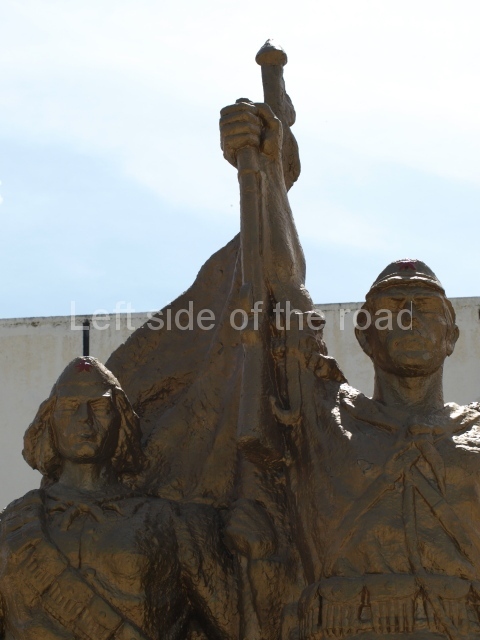