Nobody should be surprised to encounter storms in the North Atlantic during the winter months so no one could have been surprised when a night that was the literal ‘calm before the storm’ turned into the worst storm of the journey so far and, according to one of the full-time crew, one of the worst storms the ship has had to deal with.

The Watch between 04.00 and 08.00 on the morning of Monday 25th February is the most benign possible. There is so little wind that all it is capable of doing is to cause the sails (that are set to provide some level of stability) to merely flap and crack in the breeze, having no impact whatsoever on our progress which would have been nil if it were not for the engine. (The few hours that the engine is used that night was the only time we were not under sail after leaving Bermuda.)

By 08.00 things start to pick up and the ship is tacked to take advantage of the ‘favourable’ wind. It is blowing strong and, more or less, in the direction we want to go. But by midday the ‘favourable’ wind is starting to turn into a fully formed gale and it just grows and grows.

There is havoc in the galley. All the food cooking in the ovens is upturned and ruined. The ovens have to be stripped down and cleaned before they can be used again. The cook and assistant are not looking happy and the chef’s somersault from the galley into the mess is not one of joy.

The ship rocks severely from side to side, sometimes without seeming end. This means that water is scooped up and washed over the well deck (the lowest deck on the main deck). Timing is everything if you want to go down below. If you get it wrong you will be drenched. The sun is still shining and if you had witnessed the scene without experiencing the wind you would have thought it was an ideal sailing day. But it’s the Atlantic and you don’t want that cold water shower.

Fortunately no one seems to be suffering from sea sickness as the time away from Bermuda had allowed most to develop their sea legs. But the rocking is severe and would have its effect if it continued and the sea sickness pills in the medicine chest would take a hammering.

These are big seas and some have worried looks on their faces. ‘I know where I’d rather be, home,’ says one. ‘Britain doesn’t have long-range aircraft since they scrapped Nimrod, do they?’ asks another. But this is all academic. If the ship, or its crew, fails then there is no power on earth that will be able to help. Survival would depend on whatever was left of the original 23. Dependence on others would be meaningless. Four hundred miles plus east of Bermuda the nearest effective help would probably be from Nova Scotia in Canada

There’s an incredible wild beauty about this storm. So powerful, so relentless, a clear demonstration of the power of nature and the sea. But at the same time there is also a celebration of human ingenuity and ability to solve problems by the way the ship dances amongst these huge waves.

You get a strange sensation when looking towards the bow of the ship from the stern in such huge waves. It’s almost as if the ship were flying. There’s no sound from the engine as all the power is being provided by the wind and the sails are full. The more than 250 tonne weight of the ship is no different from a matchstick to the waves which just lift the vessel smoothly on the crest of a wave. The trough of the previous wave appears as a chasm into which the ship will just fall but as it descends another wave comes up to meet the downward momentum. As it does so the bow of the ship goes above the horizon and it seems that it is about to take off.

Another strange sensation is when the ship seems to be passed from the crest of one wave to the crest of another. Although we are obviously on the ‘flat’ – a relative term in such waters – it appears as if the vessel is actually going up hill. A couple of optical illusions that I’d never been aware of before.

As the ship bucks and rears there is a wall of water either at the bow or behind you at the stern. If you are on the helm you are totally unaware of what is developing behind you. Breakers that would appear in a surfers wet dream if on a beach in California or Australia race past the ship on either side, challenging us to go faster.

Attempts are made to carry on life normally below decks – but with a few modifications. Food is served in the galley rather than the mess and each holds a dish (rather than a plate) close to themselves as they maintain some semblance of normality, even using a knife and fork in a pudding dish, habits learnt at an English dining table being hard to drop for some.

By late afternoon the storm has really taken hold and helming on the ship is not just a mind game you play against the elements with the help of an hydraulically powered rudder. It is now a physical battle between the helm and the wind. Instead of trying to follow a heading that’s been given it’s now a matter of reacting to the direction of the wind as shown on one of the four electronic indicators above the wheelhouse entrance. This time it’s the decision of the helm that determines the reaction of the ship, now the direction of travel is only a general guideline, the aim is to keep the ship moving in the way that the sails have been set. It is not always easy on the helm (it was a doddle in the Caribbean) but now it’s a fight.

The helm is there to prevent the vessel from doing what it would do naturally, and that is to turn into the wind. The combination of the sails, the way they are set and the course decided (within the limitations of wind direction) all combine to tame the ship but in no way tame the waves. Push the vessel too far or make a mistake and the forces of nature will take their toll and serious damage could be caused to the integrity of the ship.

The following morning the wind speed starts to drop and the storm abates. For some time the waves are still wild and impressive but as the day wears on they return to the ‘normal’ mid-Atlantic swell. It’s interesting just looking at the sea as the weather conditions change. In the early hours of the morning it was looking black and foreboding, even though the day was promising to be one of blue skies and sunshine, yet for a time the sea looked more like mercury, a heavy, slow-moving mass that could change at any moment.

Later that day it’s possible to assess the damage. Nothing hugely significant, but as all we have is what we carry any damage can only be partially ameliorated whilst at sea. This time the tally was damage to four of the sails. One is replaced whilst another is repaired in situ. If this goes on (and it is predicted to do so) then there will be a lot of work to be done on the short 48 hour stop over that we will have in Horta, on the Azorean island of Faial, before heading up towards the bay of Biscay and the Western Approaches.

If nothing else after the successful completion of this trip the likes of Alton Towers or Port Adventura will have absolutely nothing to offer.

Click here to take you to a link on YouTube for another attempt to capture the sensation of a storm at sea on a basic video camera. At least this time the water looks grey as opposed to blue! But take note of the blue sky and sunshine. 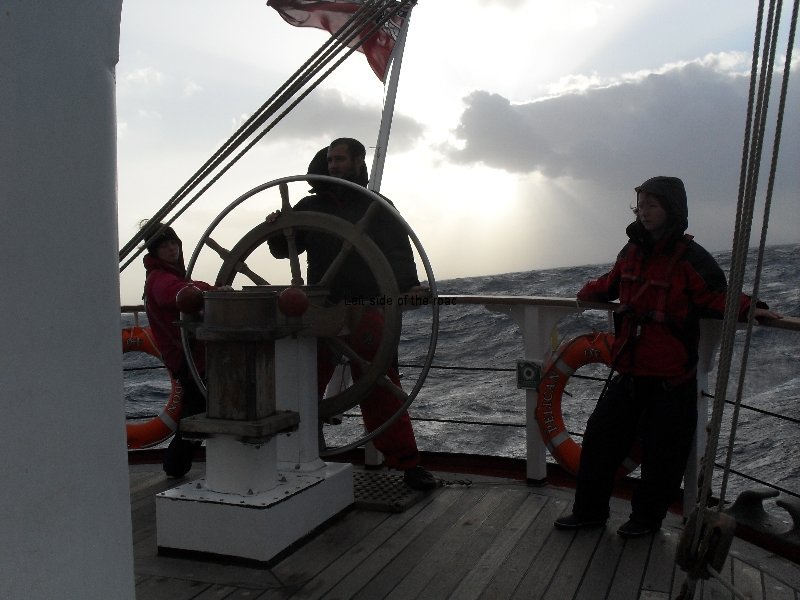 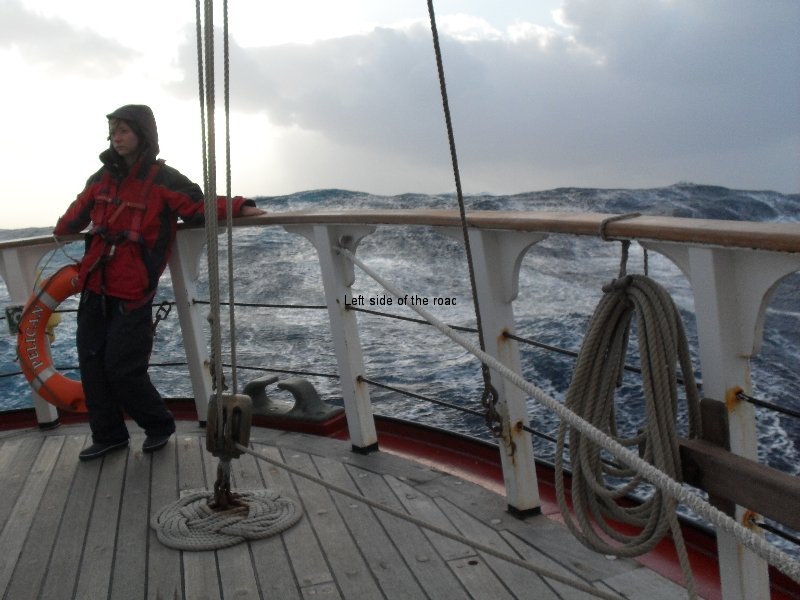 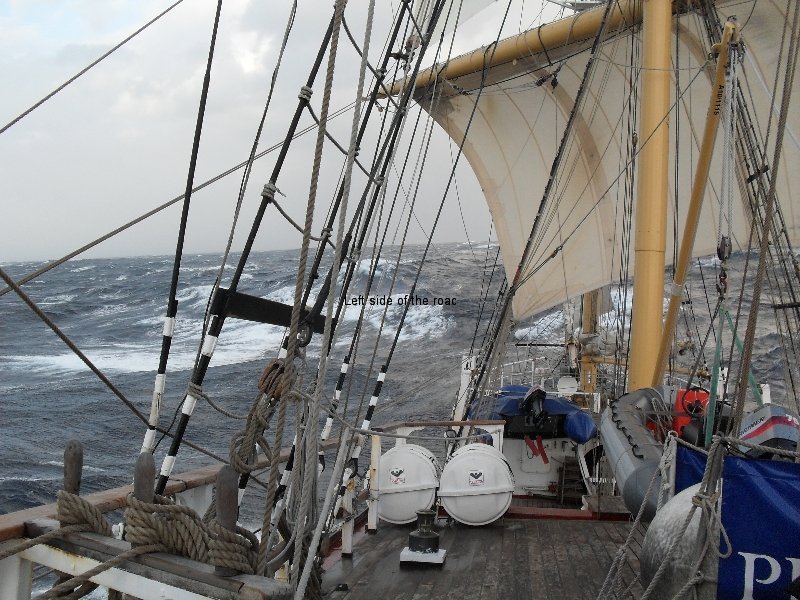 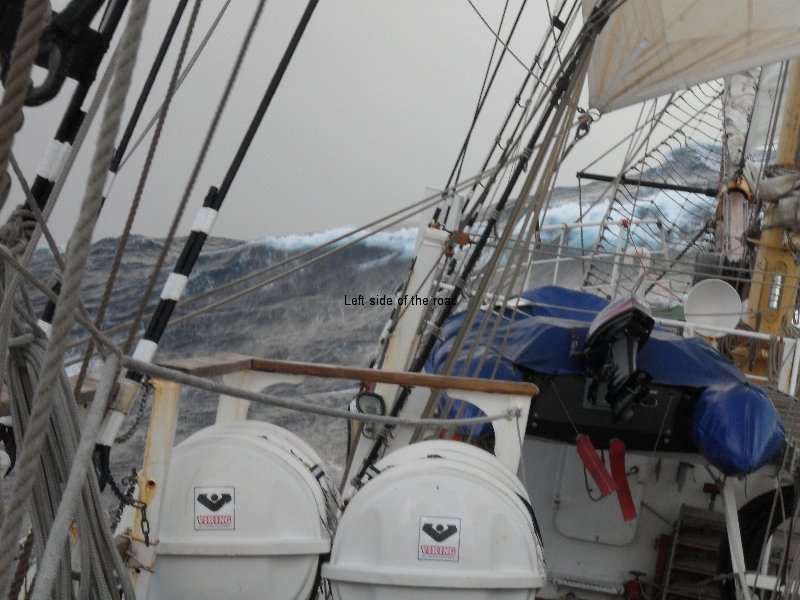 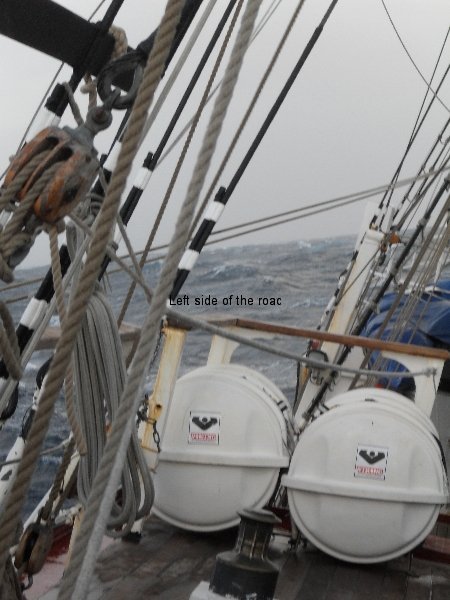 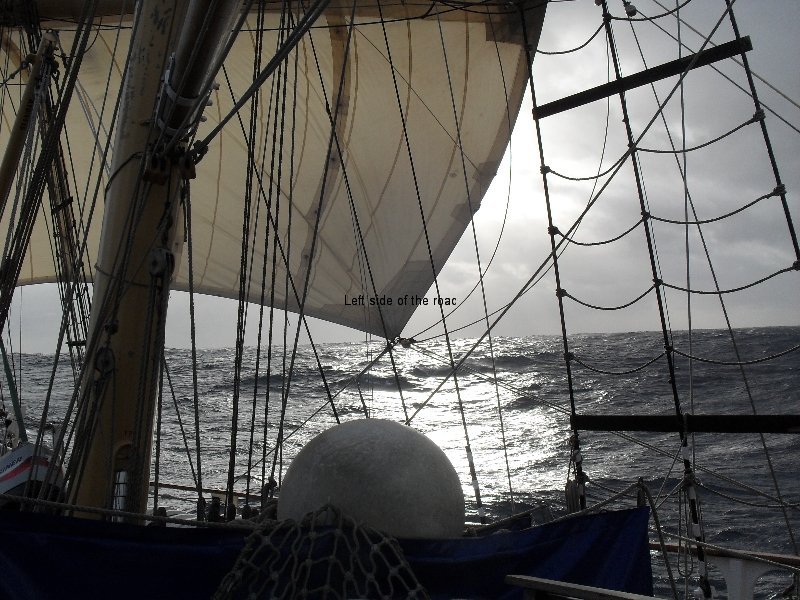 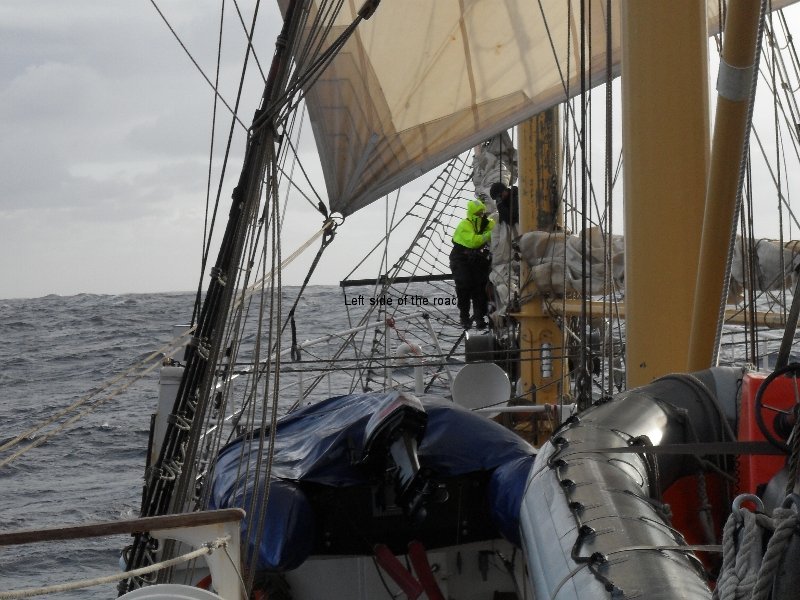 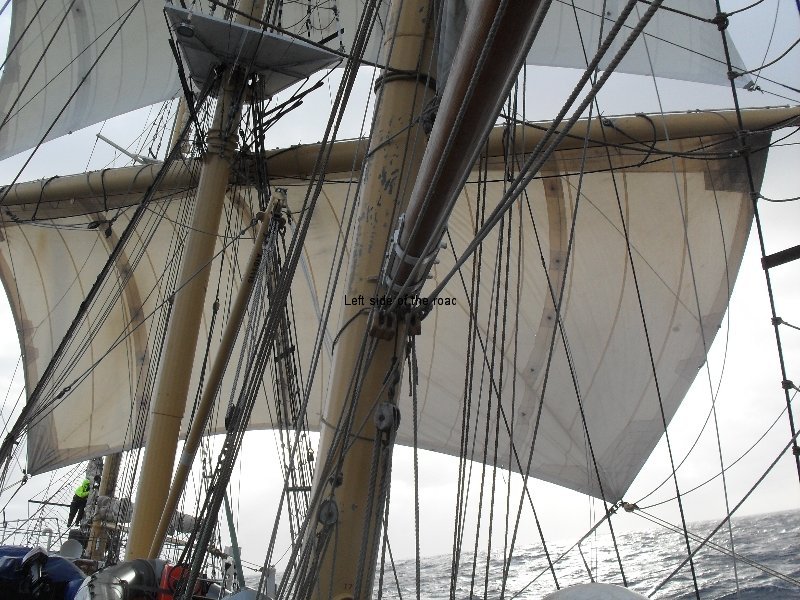 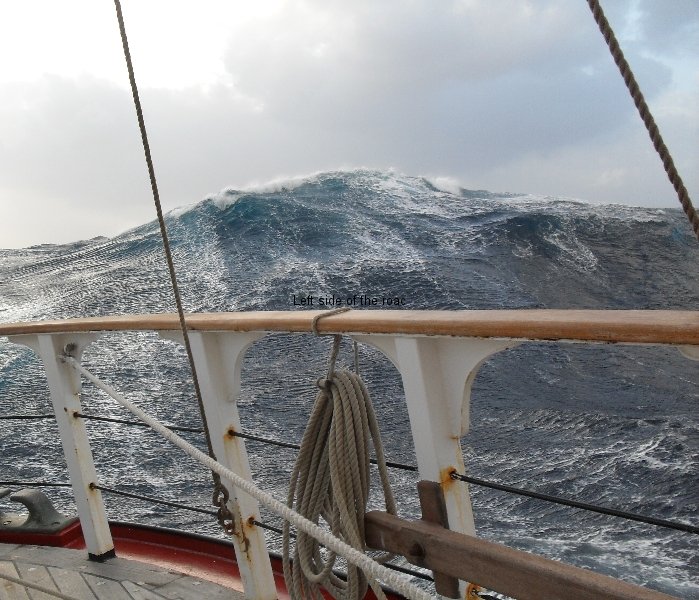