Gale in the Atlantic on a tall ship

If you attempt to cross the North Atlantic, from Bermuda to the Azores, in late February/early March then you shouldn’t be surprised if you have to confront some hostile weather. This is the story of our second Atlantic gale.

We thought the potential second Atlantic storm had decided to give us a miss as rumours went around that the swell, which was not insignificant but certainly not wild, taking us into the evening of the 2nd March, would be what would stay with us for a couple of days. It was providing good sailing wind as well as the occasional rogue waves, cutting across the beam, that tossed the ship around. We were wrong. Probably the idea had more to do with wish fulfilment than reality.

When we left the bridge at 20.00 we had been treated to a light and sound show. The flashes of lightning came from all directions, both the sheet and the fork kind. We had had lightening the night before but either those storms were too far away for us to hear the thunder or it was merely a light show. On the night of the 2nd the lightning came accompanied with thunder and just one short, if heavy, shower. The rain stopped, the time between the flashes of lightning and the thunder increased and the sound got softer, the stars started to appear all around and the idea that the storm was not going to hit started to gain credence.

Then just after 22.00 all that changed. The wind speed built up and the seas got rougher. There was a change in wind direction, the helm couldn’t respond quickly enough, the ship made an unforeseen and unplanned wear (this is the term used on a square rigger when the ship changes direction by moving the sails so that the wind is on the other side of the sails) the wind got behind the spanker (the big sail at the stern, over the wheelhouse – just the place people will be when on watch) and BANG, the wooden boom broke. (The boom is a spar along the bottom edge of rigged sail, that improves control of the angle and shape of the sail.)

About 8 foot broke off the end of the boom and hit the deck, miraculously missing two people. (The boom is, or rather was, an eighteen foot pine tree which had been shaped, by hand, to fit the exact requirements of this ship.) Here we are talking about a serious piece of wood – see the image below. If it had hit them that would have resulted in serious injury and, taking into account that we were at least seven days from any land, possibly death. The remaining part of the boom was now at an awkward angle as the ropes and wires that kept it in place are designed for a complete unit and once broken all the tensions were wrong. This had crashed down onto the roof of the wheelhouse (narrowly missing half a dozen electronic communication, warning, monitoring devices) and had to be secured before endangering the security of both the people around and the integrity of the vessel.

I know this was what happened but can’t tell you exactly how as I wasn’t there. I had gone to bed at 22.00 and all I was aware of was the erratic movement of the ship which was making sleeping difficult. I wasn’t aware of all the drama going on just a few metres above my head where the other two watches (and some of the permanent crew) were sorting out the mess.

What I do know is that it took a lot of work to get everything stowed in the manner that it was when I came out at 04.00. Everything was lashed secure, with the shattered boom in two pieces on the deck. The stress must have been immense as the part of the boom that was still attached to the mizzen mast had evidence of splintering along a good six or seven feet of its length.

When we were able to speak to the people on the previous watch we were able to learn that the fun and games went on for some time. Wind speeds were surpassing 50 knots on the anemometer (the wind speed indicator). It only measures up to 50 and I was told that the needle just stayed at its maximum range for a long time. This was much higher than the winds we experienced during the 1st Atlantic storm the week before, when wind speeds reached 50 knots – but only when gusting.

The high winds came with rain and hail and the dark obscured what the waves were doing. That’s the advantage (or perhaps disadvantage) of a storm hitting at night. You can imagine the waves at whatever state you like as visibility is so short. Good for the optimist, not so for the pessimist.

With the damage it had been necessary to alter the configuration of the sails. That meant working in what is known as the well deck. This is the lowest area on the main, outside, deck level on the boat. In heavy seas this becomes awash with water, as it’s designed to, which then drains away when the ship lists in the other direction. Water will get into the well deck on even the most benign conditions but only in small amounts and then more an annoyance than anything else. But in 50 knot winds the situation is different.

The amounts can be huge and the direction and the timings of when the water will land on the deck are impossible to predict. It seems this was what happened when people were working there. They were standing knee-deep in, surprisingly warm (I was told) sea water, trying to pull ropes and then finding that those very same ropes had a life of their own and were trying to trip them up.

After the ropes have been ‘hauled’ or ‘eased’ there is a mess of ends to be tidied up. This mess is called ‘spaghetti’. Before dawn on the 3rd March the spaghetti was in a soup, making it difficult to stand and even more difficult to clear up as the ends of the ropes were being dragged through the drainage hatches as the sea water tried to find its way back to the ocean.

So there were about 4 hours of drama on the night of the 2nd – 3rd, and I missed it all.

I merely came out to survey the damage, stand for a while looking out to the empty sea in a blustery wind, had to work a bit harder at the helm as the ship did it’s dance through the water, got wet a couple of times when water broke over the side of the ship (but never that bad), sat and watched a beautiful sunrise over the stormy sea (but wasn’t able to capture it on film as I had foolishly left my camera in the cabin), and then spent an hour or so sitting in the sun – which is still quite warm whatever the winds might do – until it was time for others to take over. That was my four hours between 04.00 and 08.00.

The ship will be feeling a bit bruised with these last couple of storms. The damage was relatively superficial a week ago, more damage to sails which has been, more or less, rectified. This time the damage has been more structural and I have noticed a few loose ends of ropes where I don’t think there should be a loose end. Others more experienced than me will sort this out in the next few days.

Perhaps some people will be busy when we get to the Azores but, so far, the damage won’t affect our moving on to the UK. The boom has terminal decay and will have to be replaced, but back in Britain. It’s role on the ship is partly to do with maintaining stability for the humans so that might mean we will have to look forward to a few rough days (and nights) before eventually arriving in Weymouth.

Today is a Sunday and the ship’s routine is slightly different. The Watches are suspended for 12 hours between 08.00 and 20.00 and volunteers take over the task of keeping the ship on course without colliding with anything. No general work is carried out and most people use it as an opportunity to catch up with some sleep – that might be even more so as we are in the middle of a gale. Also meals are different, to allow the cooks some rest, and there will be a brunch, a fry-up in place of breakfast and lunch.

Yesterday a wave came through a couple of the portholes in the galley so there will be less reason to season the meal when it’s served at 11.00. 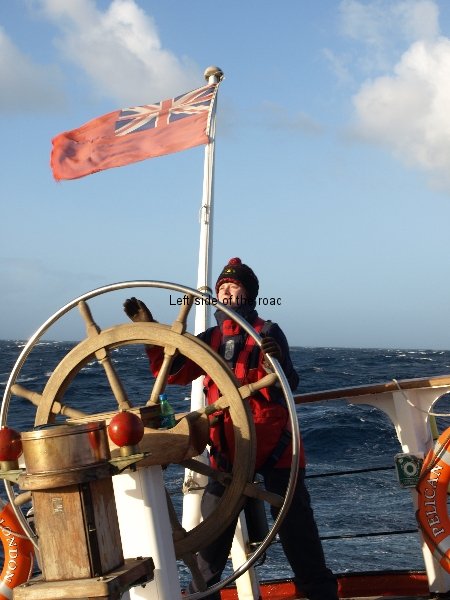 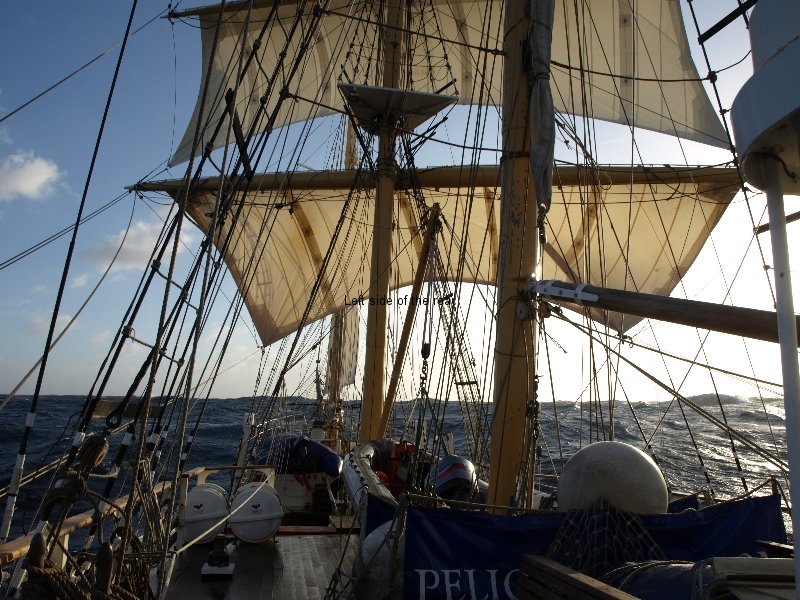 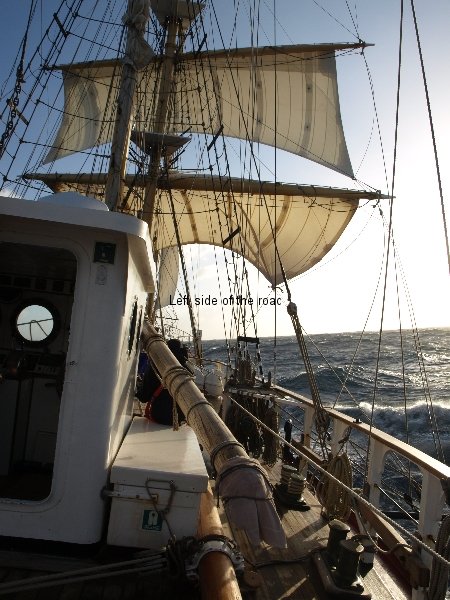 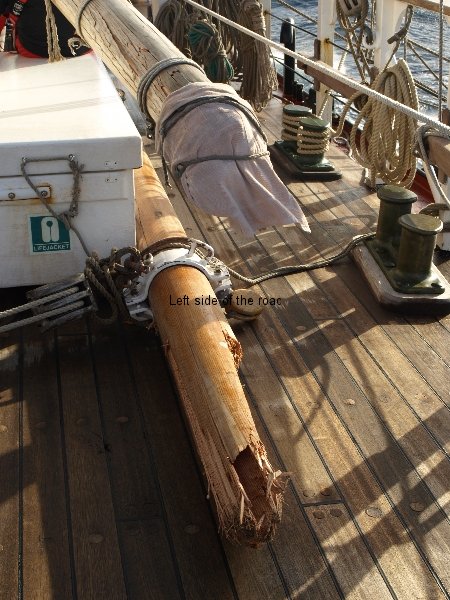 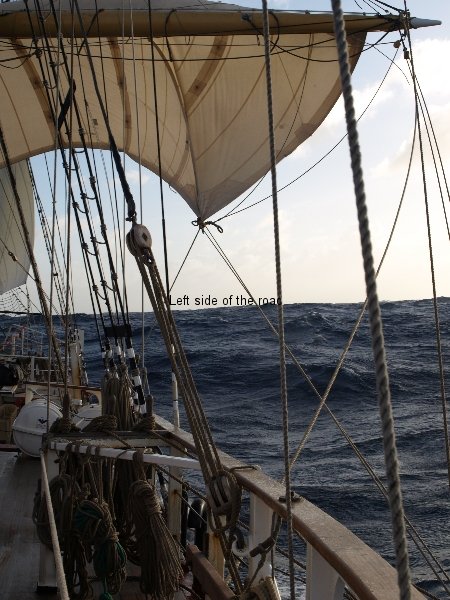 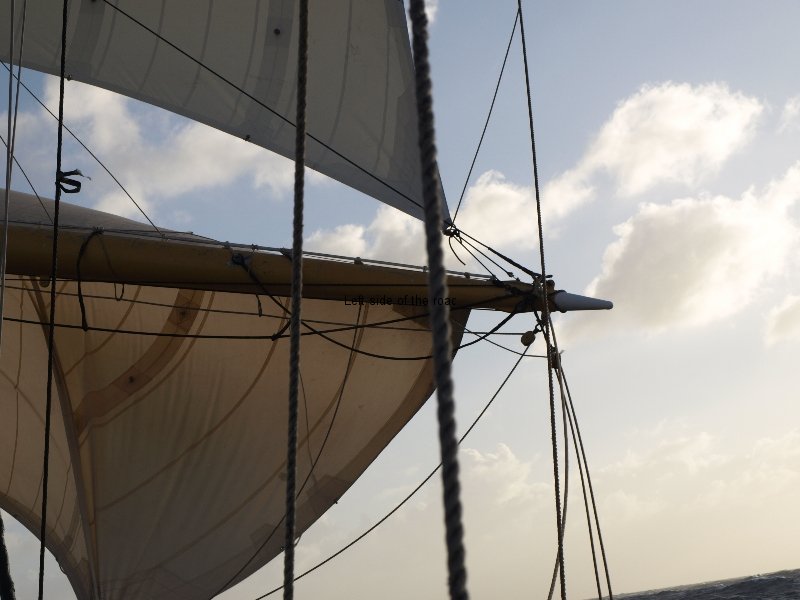 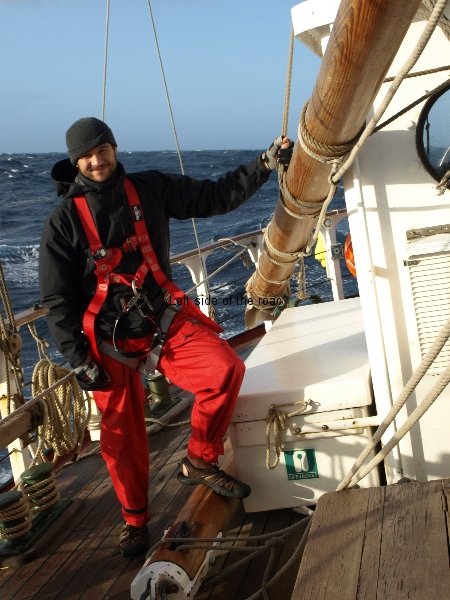 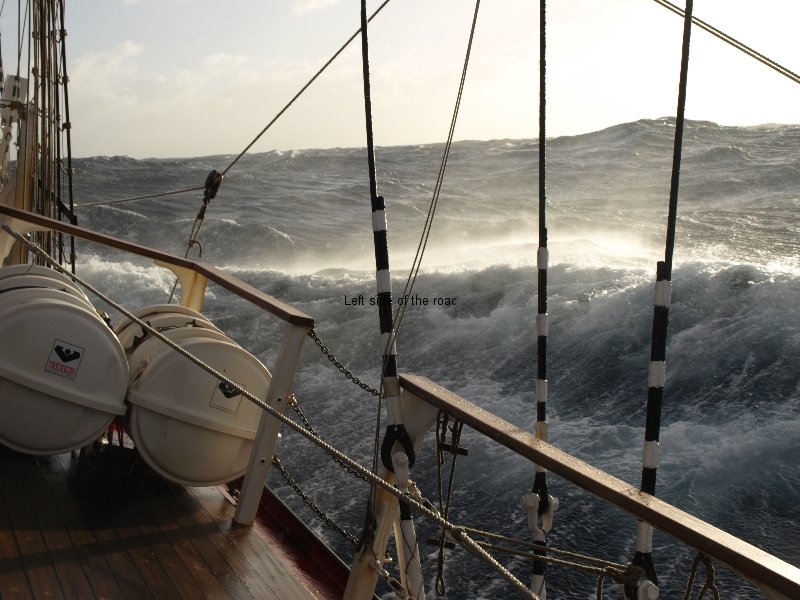 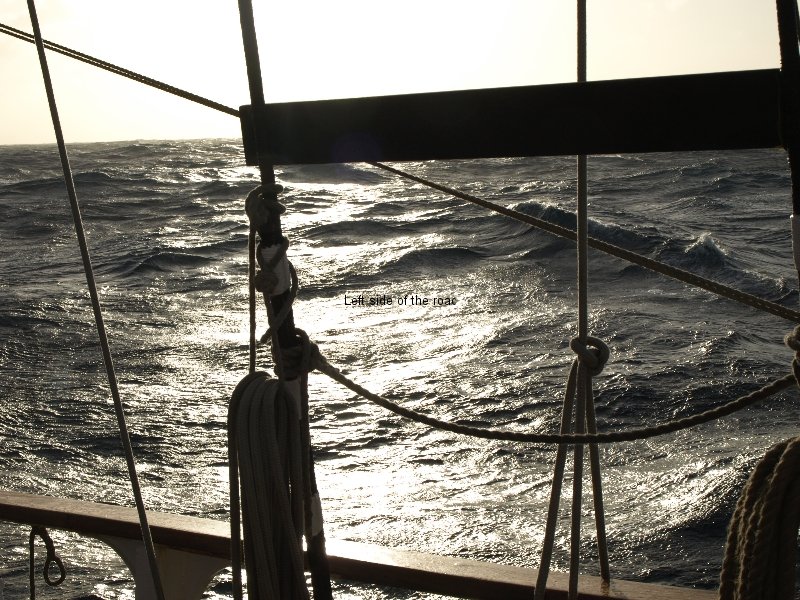 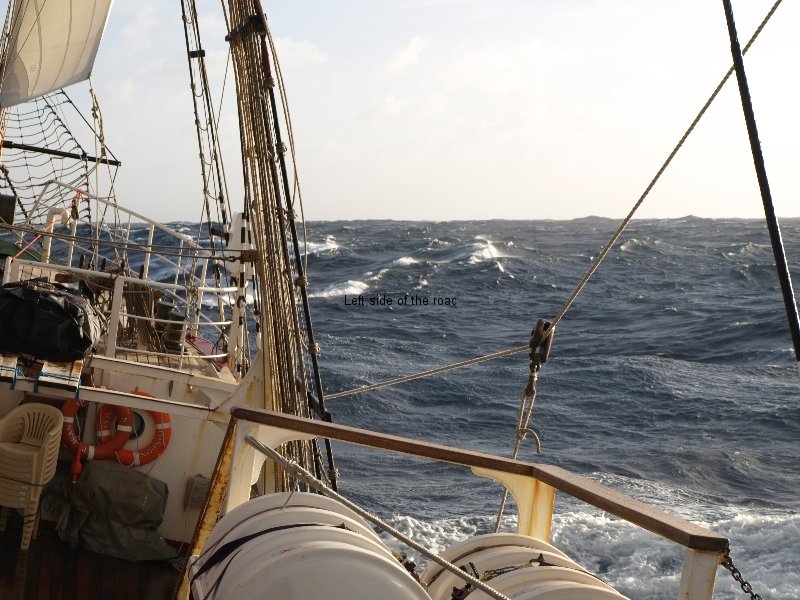 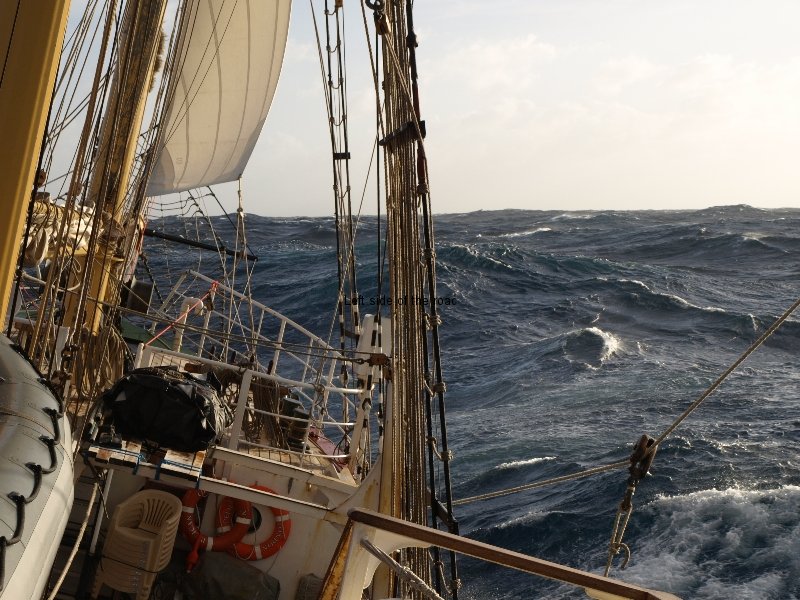 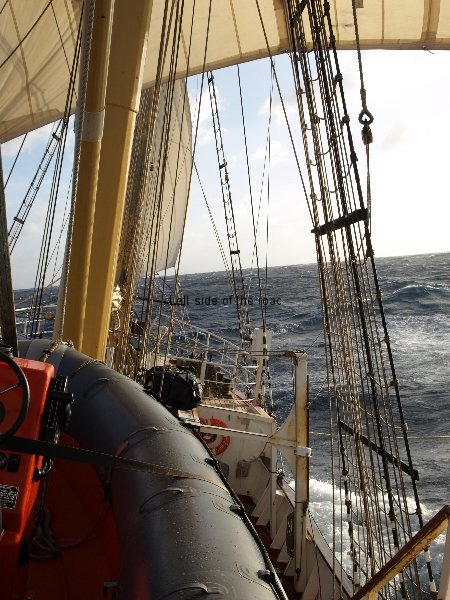 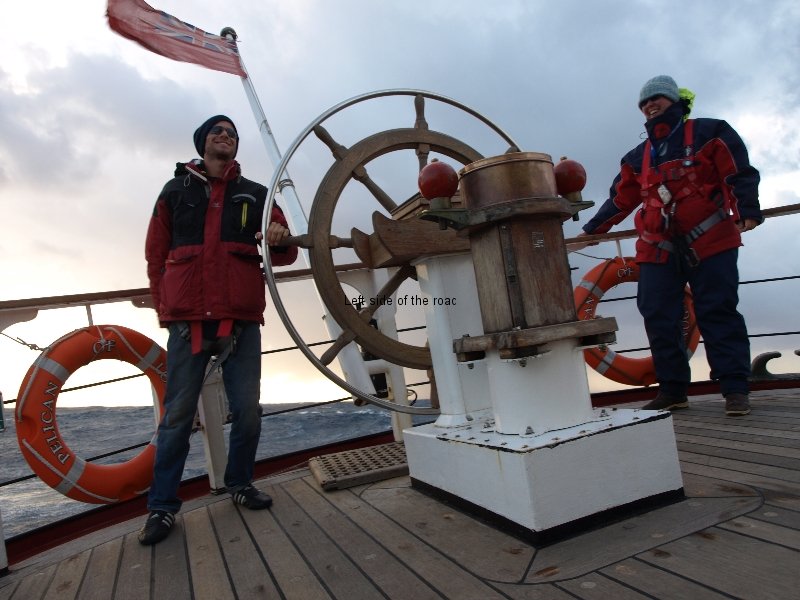 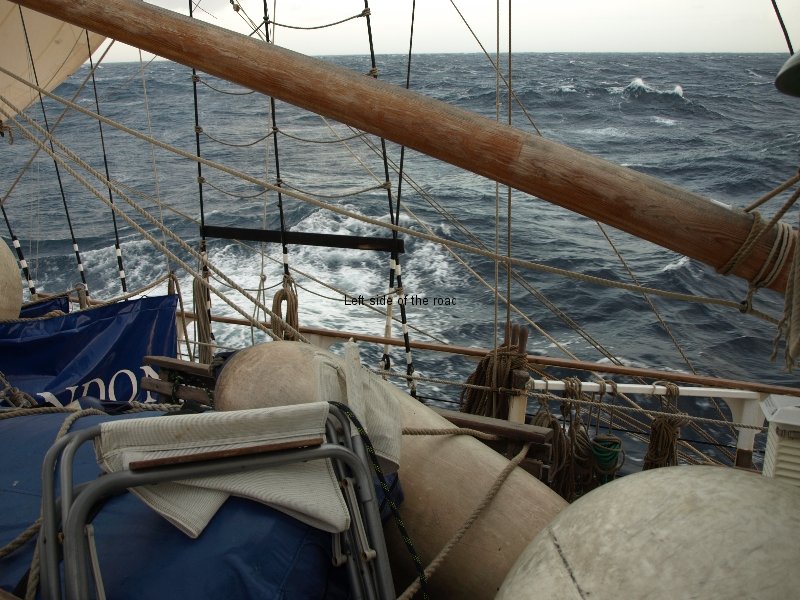 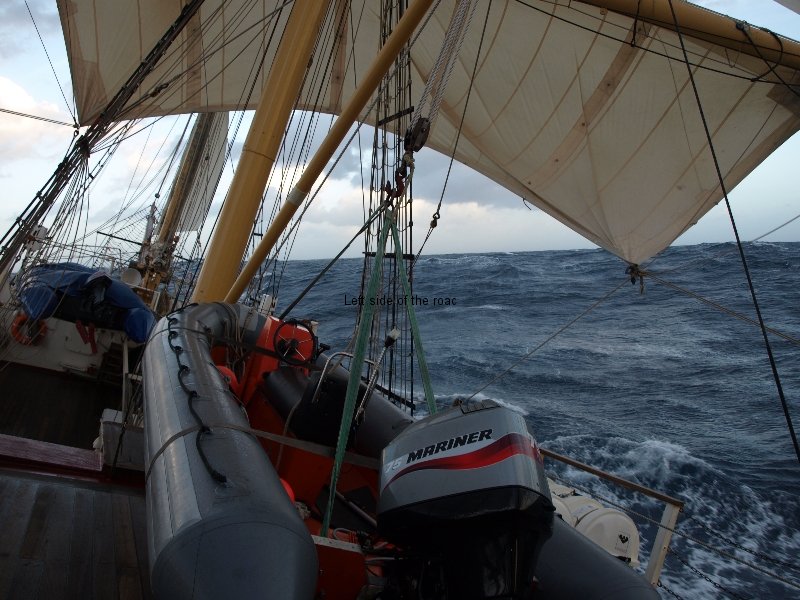 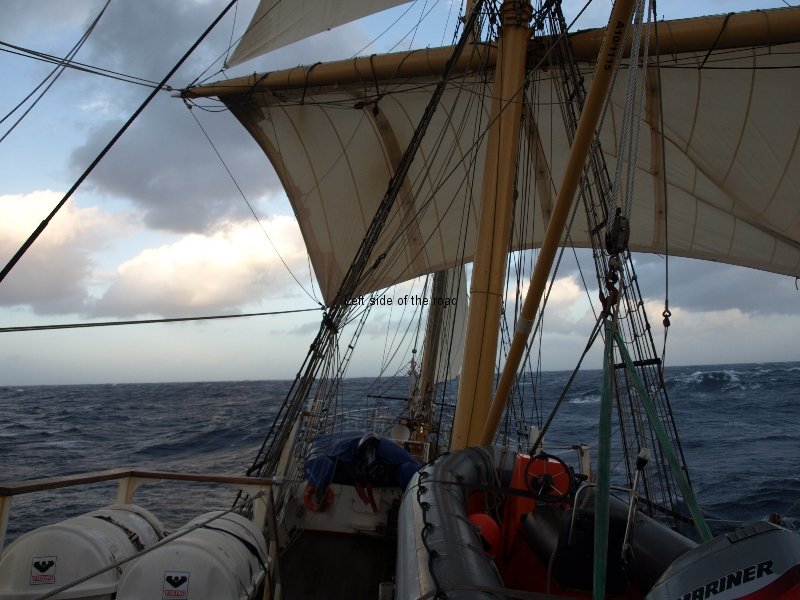